Coordinates Based on information from Significant Tornadoes, Newspaper Accounts and findagrave.com:

Like many older events, this one was a challenge. There is limited information, but after doing some digging, we were able to fill in some of the details. Many thanks to the Houston County Historical Commission for helping us try to narrow down the location of the Murray Plantation. That property spanned 4,500 acres near the Trinity River, and we have made an educated guess on where it was located. Resources such as newspapers.com, ancestry.com, and findagrave.com have become invaluable tools to find the names of those who perished and honor their lives.

A squall line moved through Texas and produced four significant (F2 or higher) tornadoes on February 8, 1935. We take a look at the deadliest twister in this summary. It was an F2 that tracked from near Ninevah through Grapeland. Along the 24.6-mile path, 12 people were killed, and 70 others were injured. The Murray Plantation was laid to waste.

The tornado first developed 12 miles NE of Centerville, near Nineveh. It was described as a “funnel-shaped cloud within the line squall.” It roared through the Storey and Darsey Plantation, where several tenant homes and a commissary were leveled. Fifteen people were injured.

Unfortunately, we are not able to locate the exact location of the farm. We know it was located on the Trinity River in Houston County. Grazulis denotes that it is near Reynard. Newspapers reported that the plantation was 15 miles west of Grapeland. However, when you plot the path from Nineveh to Grapeland, the tornado would not have hit the Murray Plantation if it was 15 miles west of town. Based on this, we infer that it was located 15 miles WSW of Grapeland, near Reynard.

Arch Murray, his wife, and three children were eating dinner when their house began to shake, and they heard the wind “howling.” They took cover in a room on the east side of the house and that was the only part that was left standing. Sadly, others on the farm were not as lucky. One woman was thrown 400 feet from her leveled cabin. A man was “sawed in half” when he was thrown through a barbed-wire fence. Tragically 11 people were killed at the plantation, and 50 others were injured.

Total devastation occurred across parts of the Murray farm. Thirty-one tenant homes and several barns were leveled and swept away. One of the dwellings caught on fire due to the stove being tipped over. Nat Hayden, a tenant on the plantation, was quoted in the February 10, 1935, Lubbock Avalanche-Journal: “It just dropped down, then was up and gone…. Everybody was sitting at home, and a heavy rain was falling all of a sudden the window started blown, and before we knew what happened, the storm had struck”. The Lubbock Avalanche-Journal reported on February 10, 1935, that at one of the Murray barns, “the wind lashed the structure to kindling.” Sixty-two mules were in the barn, and only one was killed.

Nearby was the Herman Beazley Farm. The cotton was leveled, as was the Beazley and Smith Store. The farm home was “twisted on its foundation.” Ella Hayden was severely injured here and died two days later in the hospital. The tornado then roared into the town of Grapeland. The funnel wrecked a store, church, and a school. Extensive tree damage occurred, and “many other homes and buildings were damaged.” Like with much of the rest of the path, the details of what happened in Grapeland are vague. It is unknown where the twister dissipated after leaving Grapeland, so our ending point is just the best guess based on our limited details.

A much colder air mass funneled into the area the day after the tornado. Temperatures struggled to hit the freezing mark, which added to the woes of those who now found themselves homeless. Food and clothing were provided by officials in Grapeland and the surrounding community. The National Guard stationed in Austin, TX, provided tents and blankets. Per the Corsica Semi-Weekly Light, Mrs. Edith Hennesseey, who was the field representative for the Red Cross out of Dallas, set up a local headquarters to help coordinate the relief efforts. In the February 13, 1935 edition of the San Angelo Morning Times, it was reported that 119 people were being fed, and the Red Cross was estimating $15,000 would be needed to help the victims.

Carol Anne Hoch created a virtual cemetery at findagrave.com for those who perished in this tornado. From her bio, “I am a cemetery walker. Cemeteries for me have always been a haven, a museum and an office. When the weather permits, that is where you most likely will find me. In each family there is one who seems called to find the ancestors. To put flesh on their bones and make them live again. To tell the family story and to feel that somehow they know and approve. Cemetery walking is not a cold gathering of facts; but instead, breathing life into all who have gone before.”

We took Carol’s research and did some of our own at ancestry.com. Here, we were able to find the death certificates of all who passed away. Some of the names were listed in local newspapers, and we were able to cross-check the details there.

It is important for us to find the names and ages of those who died to give their lives meaning. As we can, we try to add details about who they were or share stories we find to honor the contributions they gave to their community and their family. As Carol said, our goal is to breath life into all who have gone before.

Reynard
Ella Hayden, 37: Death certificate lists place of death at the Murray Farm, but newspapers stated she died a few miles away in Reynard, died a day after the tornado 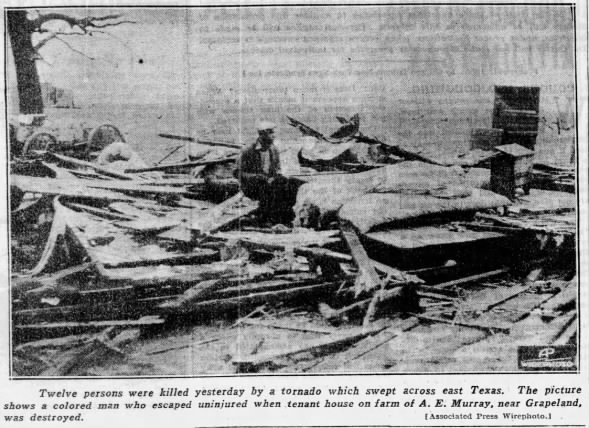 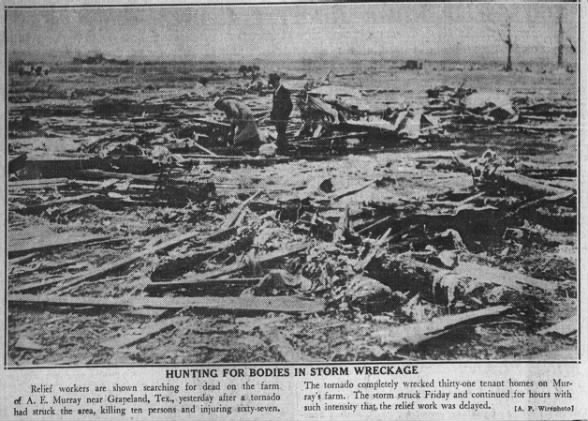 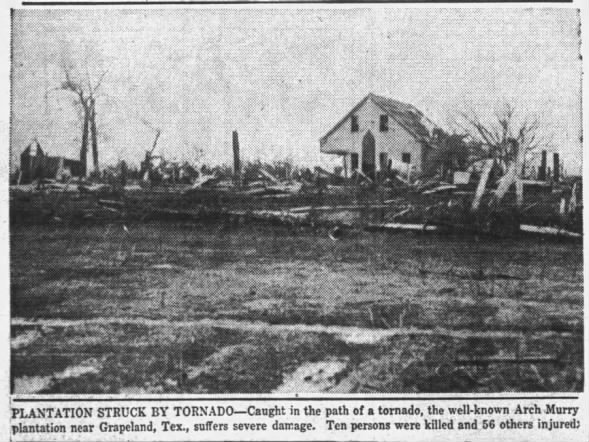 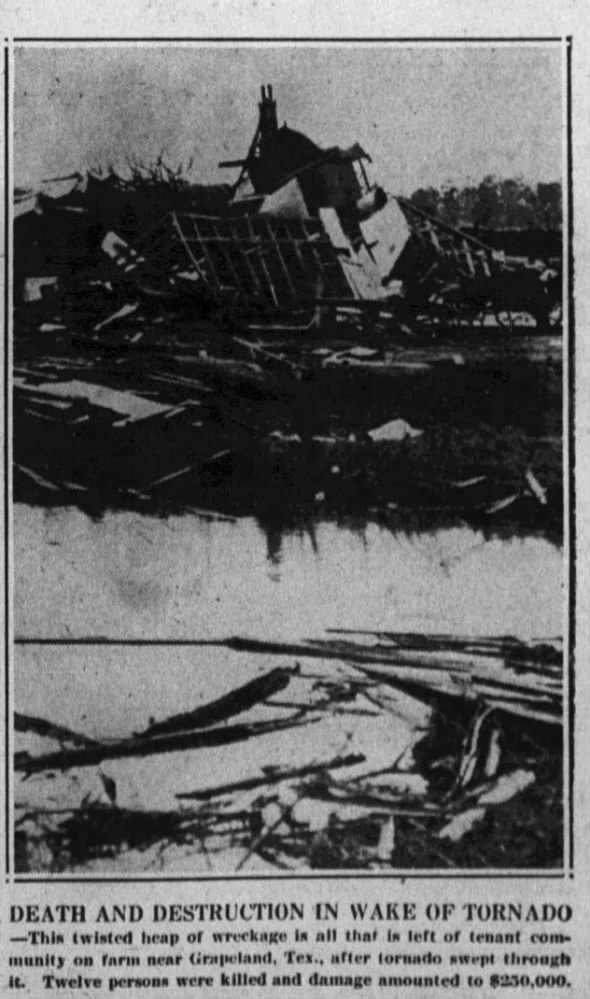 History of the Murray Farm at grapeland.net