The Greensburg Tornado of May 4, 2007 was the first to be given an EF5 rating under the new Enhanced Fujita Scale.  That scale went operational in February of 2007.  The focus of this summary will be on this monstrous tornado that wiped out 95% of Greensburg, KS.  But first, I want to do an overview.

The supercell that generated the EF5 also produced more than 20 other tornadoes across parts of SW KS during an 8-hour period.  There were several satellite tornadoes spawned around the larger Greensburg twister.  But there were also 3 other extremely large, significant tornadoes that plowed through this area during the late hours of May 4.

I discovered a powerpoint presentation entitled, “The Historic Greensburg Supercell of 4 May 2007”, created by Mike Umscheid of the NWS DDC and Leslie R. Lemon of the NOAA/NWS Warning Decision Training Branch.  It was presented at the March 5-6, 2010 DuPage County, IL Advanced Severe Weather Seminar.

In it, Umcheid and Lemon describe “The Big 4”.  These are the 4 large tornadoes generated by the Greenburg Supercell.  The graphic below from the powerpoint shows the tracks of those tornadoes along with their rating, duration, length, mean width, max width and damage area.

The Greensburg tornado was NOT the widest tornado to occur that night.  That designation was given to the Trousdale tornado.  The max width was estimated at 2.2 miles!

Here are the Storm Data damage details on the Trousdale, Hopewell and Macksville tornadoes.  All rated EF3 and all occurring from the same supercell that produced the Greensburg EF5.

The tornado that would hit Greensburg, KS began in Comanche County at 9pm CDT.   This supercell had already had a history of producing tornadoes near Ashland, Sitka and Protection.   In Comanche County, EF1 damage to some oil tanks and trees was recorded. It was noted in Storm Data that “oil was strewn across pastures and a county road.”
At 903pm, the tornado crossed into rural Kiowa County.  At 919pm, the first tornado warning mentioning the town of Greensburg was issued by the NWS Dodge City.

At 928pm, an update to the tornado warning was disseminated.  It stated…

The second at 941pm.  This update used the words “Tornado Emergency.”

A new tornado warning was issued at 950pm.  This was the last warning before the massive tornado was to make a direct hit on Greensburg.  The next update came out at 958pm. 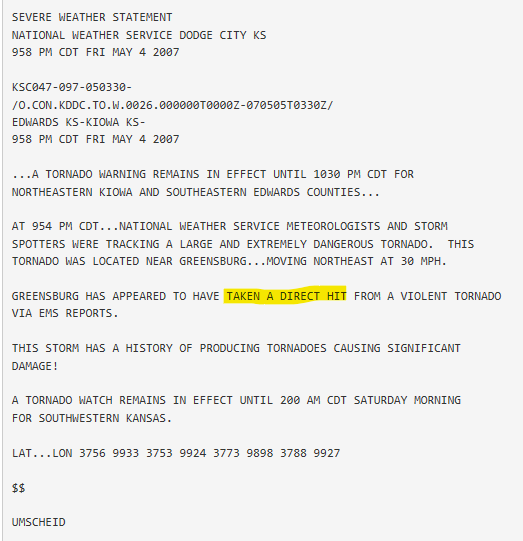 The tornado destroyed nearly 95 percent of the city of Greensburg.  As we can see, there was adequate warning but sadly, 11 people were killed.  Some were killed in their basements.  The max width of the tornado was 1.7 miles.  From an article about the Greensburg tornado by US Tornadoes, “Despite great warning, Greensburg is only about 1.5 miles wide at its widest.  So the tornado impacted the whole town in some way. The scene was perhaps better described as post-apocalyptic than post-tornado.”

Per Storm Data:  A total of 961 homes and businesses were destroyed, 216 had major damage and 307 received minor damage.  There were 63 injuries.

Greensburg High School was destroyed by this tornado and damage there was estimated at EF-4.  Per the damage survey, “The High School was located about one block east of the convergence line and experienced the strongest winds from the south through east.”

The NWS Storm Data entry mentions that several oil storage tanks were destroyed and there was an environmental concern.  Hazardous material was “strewn everywhere.”  There was approximately 400,000 cubic yards of debris removed from the area.  The major highway through town was clsoed for one month.

The official path length was 25.8 miles and the path was unique.  It moved NE out of Comanche County into Kiowa.  It then curved north then northwest before making a complete loop northwest of Greensburg.  Per Storm Data, about the “loop”, “this was documented on both high resolution doppler radar and through the ground survey.”

In an article entitled “Remembering those who died in the Greensburg tornado”, Stan Finger from the Wichita Eagle lists those who perished along with a brief bio.  I encourage you to read that here.  Here are the names of those who died.

The following information about the rebuilding effort comes from the City of Greensburg website and their 10th anniversary booklet.  Greensburg was declared a major disaster area on May 6, 2007 by President George W. Bush.  More than $100 million in federal assistance was provided for emergency response, temporary housing, repair, etc.

A grass-roots community rebuilding effort, guided by a FEMA long-term recover team, held meetings to develop a plan for the future of Greensburg.  Their goal was to rebuild “better, stronger and greener.”  What does that mean?  From the commemorative booklet, “For Greensburg, it means designing and building structures that will endure for generations, and be environmentally sound.  Two ways we embrace this building philosophy are by using alternative energy sources, as well as energy-saving fixtures.  The results mean a more efficient use of natural resources as well as reduced operating and maintenance costs for many public buildings and homes throughout the city.”  Some of the ways Greensburg is “green”:

Reflectivity and velocity loop of the Greensburg supercell from the Dodge City, Kansas doppler radar. (Author via NEXRAD data on Amazon) via US Tornadoes

Radar image of the Greensburg tornado as it approached town at 9:37 pm May 4, 2007. #kswx pic.twitter.com/eg5mYXCsRW

Got a request for #Greensburg 10 year anniv video...& didn't realize I still had this public. Editing is so old ha: https://t.co/7owEyLl40e pic.twitter.com/bfvNxDaHEY

One of our @kshighwaypatrol Troopers, 7 years ago after the Greensburg tornado May 4, 2007. pic.twitter.com/xho1aSeXBa

Today marks the 12-year anniversary of the Greensburg tornado. Pictures of the damage, including this shot of the Greensburg High School, can be found on Kansas Memory. #kansashistory pic.twitter.com/SsZBepsa97 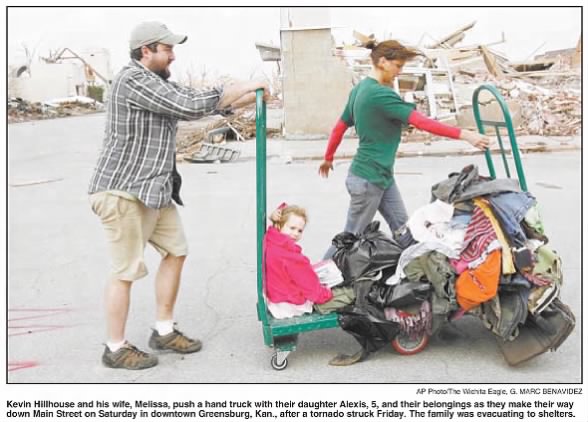 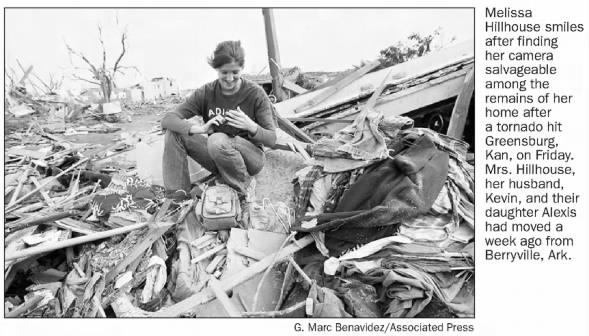 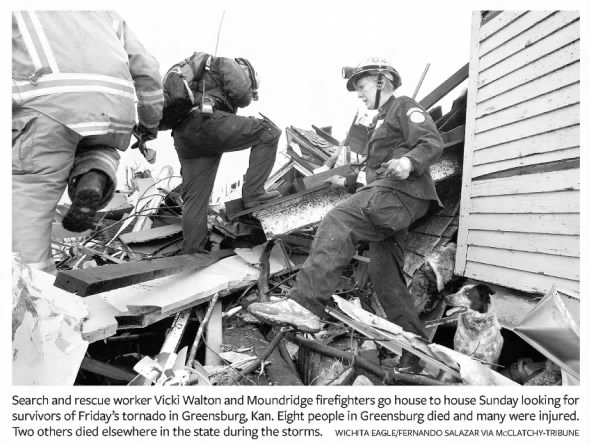 May 4, 2007:  The night that made maps of Greensburg, Kansas have to be redrawn – US Tornadoes