A long-track, deadly tornado occurred on January 23, 1969.  In his book, “The Tornado: Nature’s Ultimate Windstorm,” Thomas Grazulis notes that the process that brought about using the Fujita Scale to rate tornadoes can be traced to this event. (Grazulis, 2003).  This tornado devastated the town of Hazlehurst, MS.  It is the deadliest tornado on record (1950-current) in January.

Let me get through a couple of discrepancies in the record:

The Storm Data Narrative is extremely detailed.  The link to the full document is found here:  Here is a breakdown of the damage:

Damage in a 1/4 mile area on Highway 28, 6 miles SE of Fayette.  A vacant house was “blown away” and roof damage to another home—numerous reports of large hail in this area.

Around 6:20 am, a Highway Patrol Car was parked on the south exit ramp of US 55, about 1 mile south of Hazlehurst.  The driver described the weather as “cloudy….it was very dark, and the lightning and thunder seemed far away.  It became very quiet.  I heard a roaring that sounded like a train before the winds hit”.  This occurred at 6:25 am.  He told a reporter, “…and then…the glass shattered and rocks were going everywhere.  When I looked up, I saw this big, black funnel cloud going over the hill (east towards Hazlehurst).”

Starting near Highway 51, south of Hazlehurst, the storm completely flattened a 1/4 to 1/2 mile wide area.  Almost all of the property was destroyed, yet just 100 yards to either side, homes, and businesses were left untouched.

One family of 15 occupied a 4-room frame building atop of a bluff overlooking Lumber Mill Pond.  Their home and most of the occupants were blown ~70 yards into the pond, along with other houses and people.  In all, 18 persons were dumped into the pond.

East of Hazlehurst in the Shady Grove area, the tornado destroyed several homes and buildings before “skipping” across the Pearl River.

There were 11 deaths in Hazlehurst, and 140 were injured.

As the tornado approached and crossed the Pearl River, a family in a home on the riverbank laid on the floor and were not injured.  Their home was destroyed, and a school bus parked in front of their home had its bus body blown away.

The twister moved a few miles south of Harrisville, which was the hardest hit in the county.  South of town, a sturdy log farmhouse, and a barn were “reduced to rubble.”  A husband and wife were killed.  Their bodies were found on a hillside behind where the barn had been.  A school bus parked in the yard was “torn apart and its frame found across the road and the twisted body of the bus about 1/4 mile away.”

At the W.W. Shorter Poultry Farm, five chicken houses were “ripped apart.”  A home was destroyed, and a husband and wife were killed.

The Drummond’s house was destroyed.  Five people were killed here.  Three bodies were found in the woods; two died at the hospital.  A school bus had picked up a girl and her two brothers who lived at the Drummond house with their aunt.  The bus, 50 yards from the home, was making a turn off Highway 49 when it was toppled and blown against a pine tree.  All 14 students on the bus were injured.

Later in the path, at least two homes were leveled.  Three women were killed.

12 people were killed in Simpson County and at least 65 injured.

On Highway 13, near Puckett, a man was out milking when he noticed the tornado.  He ran into his home, gathered up his wife and daughter still in their nightclothes, and went into his car.  He started it, but as they went from their driveway to Highway 13, the engine stalled and wouldn’t start again.  Less than 50 yards from their house, the family jumped out of their car and huddled in a ditch.  Their home was hit by the tornado and ripped from its foundation.  The car which had stalled was lifted and slammed onto the road’s west embankment (opposite side of the highway from them).  The woman had an injury from a falling limb, but they survived.  They mentioned to others that during the time the tornado was passing through, “they thought for a half-minute or so they were going to suffocate because they couldn’t get their breath.”

Some items in Rankin County were carried many miles into neighboring counties.  A deed of truth was recovered in Lake (Scott County), and a check was found in Decatur (Newton County).

Several homes were damaged in the Puckett area, and a home was destroyed at Rock Bluff.

There were no fatalities in the county and one injury.

The Smith Family had lived in a valley just off the Trenton-Sardis road for four generations. Three houses were built in the valley.  At the entrance to the valley, a house sits atop a hill with a view of the whole area.  A man watched from his carport’s windows as the tornado swept away two of the homes and flattened six chicken houses.  Five members of the Smith family and a maid were killed.

There were nine fatalities and at least 35 injuries in the county. 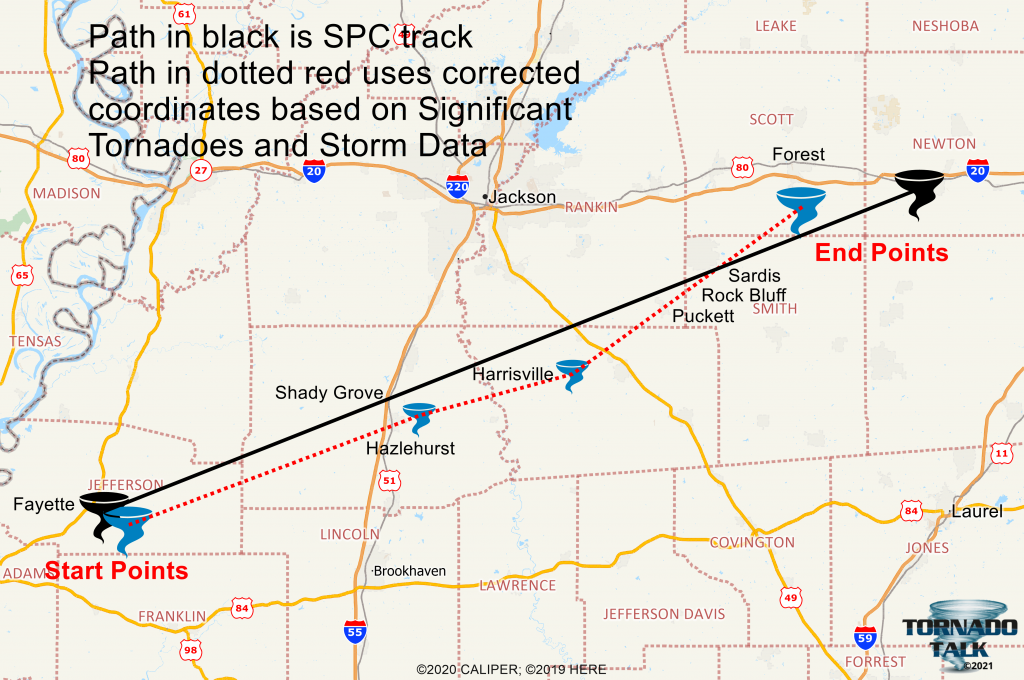 Corrected coordinates based on damage reports from Significant Tornadoes and Storm Data.

On Weather Brains Episode 695, we take a look at the Hazlehurst event.  We also interview filmmaker Steve Collins, who created a documentary called “The Boy With The Pop Bottle On His Head.”  From reelhouse.org, ” an unbelievable yet true story of a strange 12 year old boy, who appeared out of nowhere in Hazlehurst, MS from parts unknown wearing a pop bottle on his head, and predicted the deadly tornado of 1969, that not even the meteorologists saw coming” 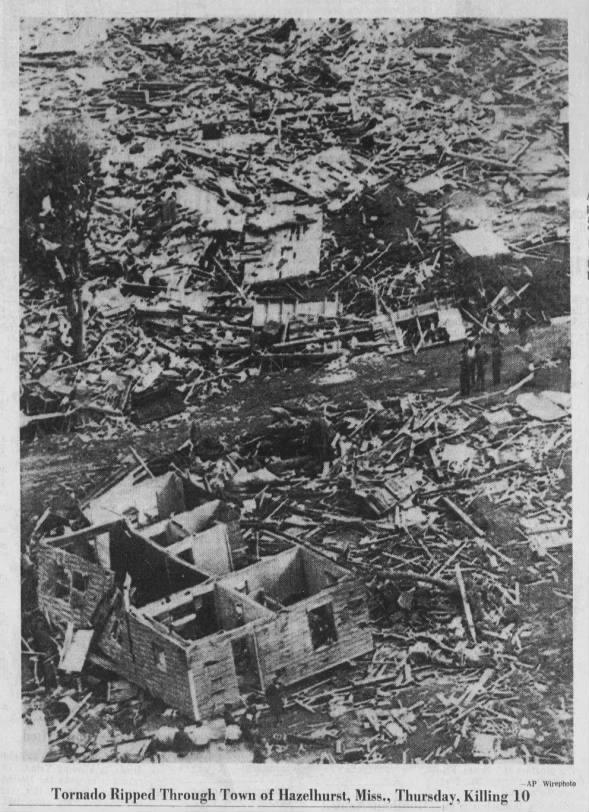 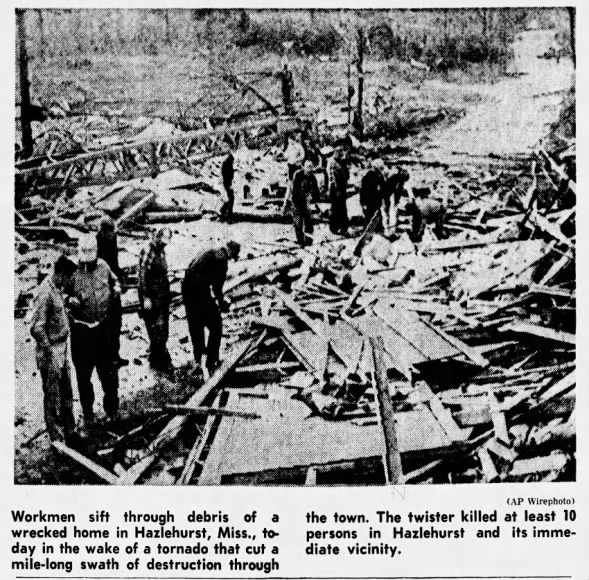 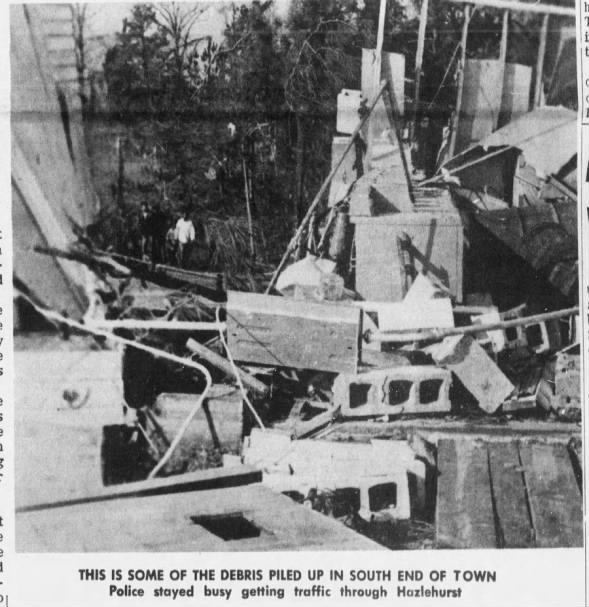 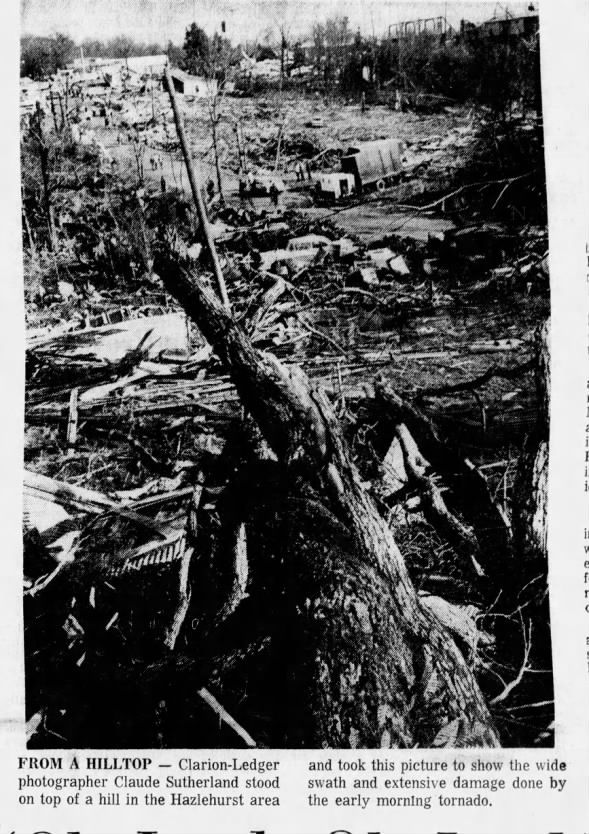 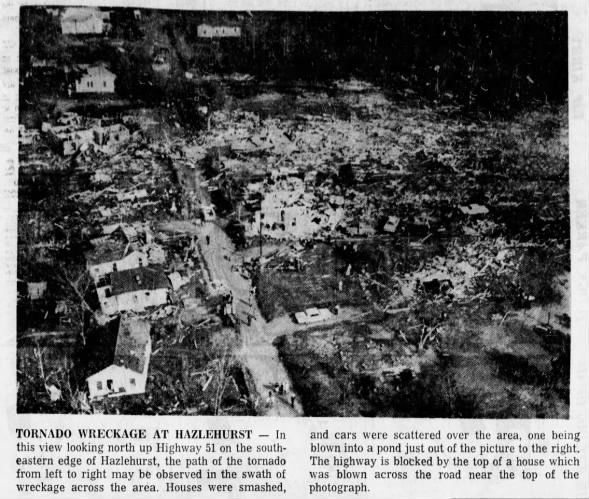 We gathered information for this event from the SPC & NCDC Databases, the January 1969 Storm Data Publication and Thomas Grazulis in Significant Tornadoes and found the following differences:

I have two stories about the Hazelhurst tornado. My father was an architect and was hired in the early 70s for work on a manufacturing plant there. From the first day he was told that because of this storm there would be tornado safe rooms added to every renovation or addition done there.
Also, right after the storm, a lady in Hazlehurst was asked why she did not take shelter when the storm was coming. She replied, “Miss Judy (Denson, the weathercaster at the time at WLBT in Jackson) said it was going to be okay, so I went to bed.”