Per the March 1990 Storm Data Publication, “The “Hesston” thunderstorm complex produced at least four tornadoes totaling nearly 120 miles on the ground over a 3-1/2 hour period.”

The first tornado touched down in Reno County, traveling into Harvey County and intensifying into an F5 while hitting the town of Hesston.  It began to weaken in far SE McPherson County.

The second tornado formed in Harvey County, North of Hesston.  It traveled parallel to the 1st tornado for nearly 2 miles and then merged with it.  This led to a rapidly intensifying tornado, another F5.  It reached that intensity near Goessel, KS.

The third tornado was an F2 that traveled from Marion into Morris County and eventually toward SE Geary and Waubunsee County.

The fourth tornado touched down near Wamego in Pottawatomie County.  It was rated F1.

We are going to take a look at the 2-F5 tornadoes that occurred from this complex.

It was given a rating of F5.

The “Hesston Tornado” began just south of Pretty Prairie in Reno County, KS.  It grew quickly and reached F5 strength.  It traveled 21 miles and made an entrance into Harvey County, 8 miles SW of Burrton.

A 6-year-old boy was killed in Burrton.  He was huddled with his family, and the chimney topped into the basement where they were seeking shelter.

The tornado continued NE and plowed through the western parts of Hesston.  226 homes and 21 businesses were damaged or destroyed.  Approx. 90 homes were “beyond repair,” and 30 were totally destroyed.   The tornado path in Harvey County was 26 miles.

As the tornado moved through Hesston, a second tornado developed 1 mile north of town.  Both tornadoes traveled about 2 miles roughly parallel in McPherson County.  The “Hesston Tornado” began to weaken, and eventually, the 2 tornadoes merged.  “The Goessel Tornado,” another F5 was then produced.

Interesting occurrences from the Hesston Tornado per Thomas Grazulis in Significant Tornadoes:

It was given a rating of F5.

Per the Storm Data Publication, the “Goessel Tornado” was the strongest of the outbreak.  An elderly woman was killed near Goessel.  Per Thomas Grazulis in Significant Tornadoes, “She was living in an army barracks building that had been converted into a home, but with no basement.”

This tornado dissipated near Marion Reservoir after passing south and east of Hillsboro.

Path in Blue is the Hesston Tornado

Path in Red is the Goessel Tornado

Images from the NWS Wichita about "The Merge" 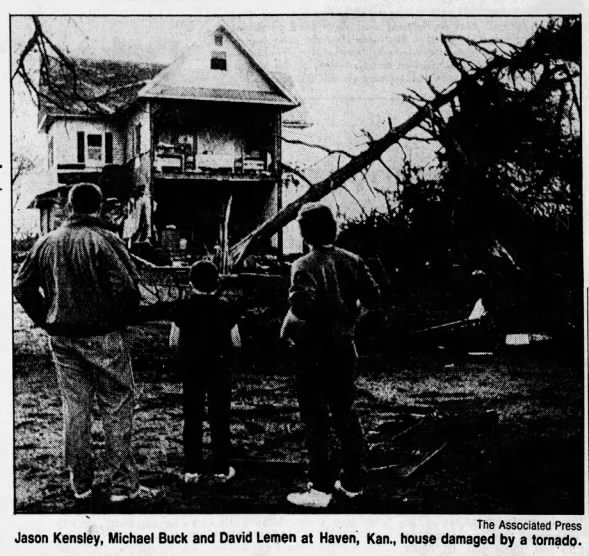 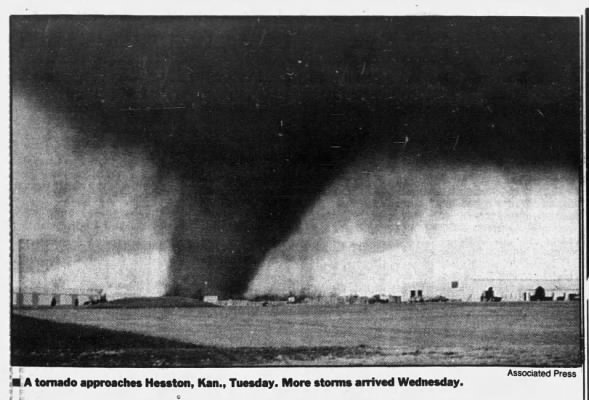 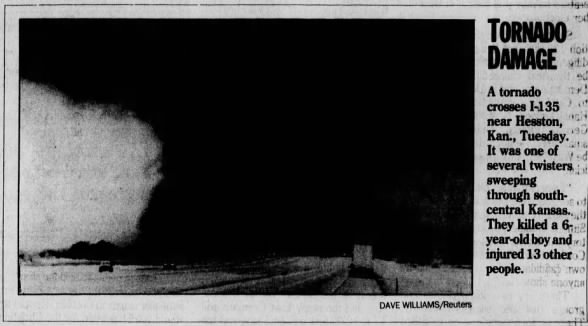 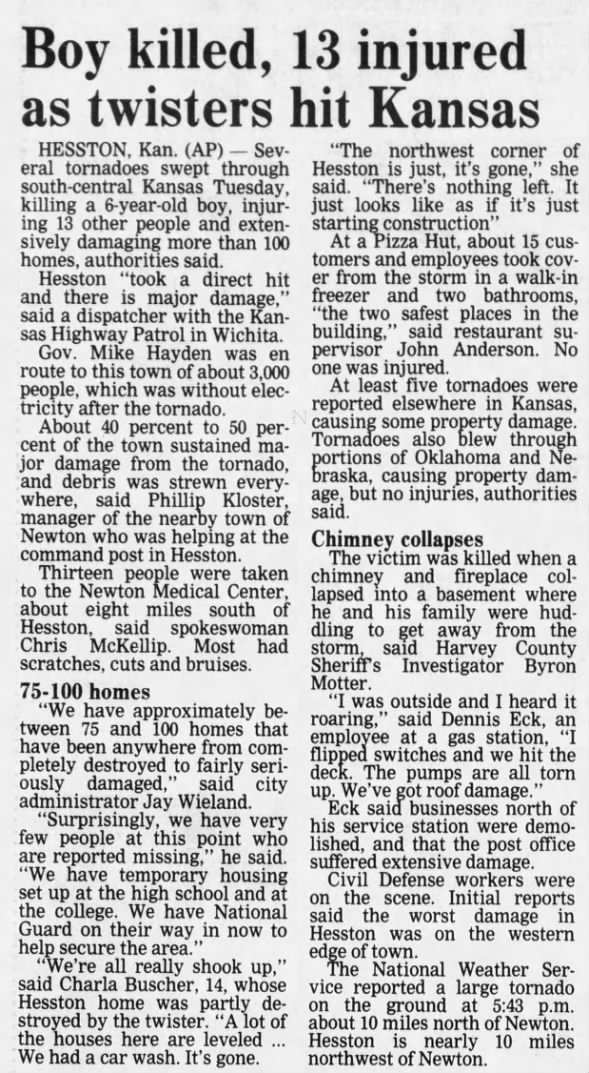