On August 11, 1993, the strongest and arguably the most unique tornado in Utah history would form in the Uintas Mountains roughly 80 miles east of Salt Lake City. For all that this tornado is – one of only two of its kind – it has been completely forgotten. It produced tree damage that is reminiscent of the 1987 Teton Wilderness F4 tornado, in more inhospitable and higher altitude terrain. You can find the summary on Teton Wilderness here. This was also six years to the day before the infamous Salt Lake City tornado.

Note: Little to no detailed information on this event exists. Therefore, much of the information in this summary, unless given a stated source, is derived from my own extensive examinations of the event. Many thanks to NWS Intern Nick Wilkes for his professional aid and advice which helped in the accurate portrayal of this event. I also want to thank Allen Huber of the Ashley National Forest Service for his information and images of the aftermath.

Per the Storm Prediction (SPC) this tornado began around 5:50 pm MST, in the Uinta Wilderness Mountains in northern Duchesne County. This is roughly 17 miles north of the closest community, Altonah. The entire track was located within both the Ashley National Forest and the Uintah and Ouray Indian Reservation. The official start and end coordinates are puzzlingly so far displaced from the actual track that they reside in an entirely different geographical area.

The NWS mentions three specific areas of blowdown that they refer to as one “skipping” tornado. I have identified two almost certainly separate tornadoes here. The first “blowdown”, which I believe is the first tornado, occurred on an eastern facing slope of a high east-facing cirque (a half bowl like feature in the sides of mountains from glacial erosion) along a ridgeline three miles northeast of Lake Fork Mountain and a little over a mile west of Yellowstone Creek. This starting point was at an elevation of 10,230 feet, putting it in an elite tier of high altitude twisters. The worst tree damage began at the moment of formation, with every tree in a small swath snapped or uprooted in a vivid circular pattern. While intense, this path abruptly ended only three-quarters of a mile east of where it began. By the end of the track, the tornado had descended 870 feet in elevation to an altitude of 9,360 feet. The area of this blowdown was stated to be 20 acres of forest by the NWS.

The second tornado began seven miles to the east-northeast of where the previous one ended. It is my and Nick Wilkes’ professional opinion that the second and third “blowdowns” was an entirely separate tornado from the first area. My starting point is well before the second noted blowdown through a thin line of trees near several unnamed mountain peaks, at an altitude of 10,960 feet. This is a little over a mile northwest of Lily Pad Lakes. These peaks were directly crossed over at a maximum elevation of 11,390 feet. While those rocky crests were devoid of all vegetation, a narrow strip of trees in between two of the peaks was destroyed in a tornadic fashion. This proves that the tornado was still entirely active as it moved through otherwise rocky terrain above tree level for two miles, even with no other damage indicators to show its presence.

After these two miles the tornado descended below elevations of 10,880 feet into forested areas. This is where the second blowdown began. The damage as the vortex passed into the treeline was of exceptional intensity. I estimate the tornadic damage path to have been greater than 1,000 yards in width at that time, with non-tornadic damage encompassing 1,500+ yards. Every single tree without exception was snapped, uprooted, or thrown in various directions. 100% treefall in a forest from a tornado has been used as guidance for rating tornadoes EF3+ on the Enhanced Fujita Scale. I would also like to point out that it was considered with the Teton Wilderness Tornado in 1987 that, because of the decrease in pressure and density, “F4 winds may be needed to produce F3 damage in the air at this altitude.” Considering that “this altitude” was referencing up to 10,000 feet, this is entirely applicable here where the High Uintas Wilderness tornado exceeded such altitudes.

Soon after descending into the treeline and the area of the second noted blowdown, a remarkable feature would illustrate the multi-vortex power of this tornado. A vortex became stationary just southeast of Bollie Lake, creating the most geometrically perfect stationary vortex treefall pattern I have ever seen. I mapped 1,036 trees in that immediate vortex area, showing just how large this marking was. I was fascinated enough by this incident to map the treefall directions of all trees within the wider region, which can also be seen below. This is included with topography maps to illustrate how the topography appears to have enhanced some of the flows from the tornado, channeling the wind in specific opposite directions and supercharging a smaller vortex. In this area I also documented a microburst signature within the tornadic swath itself. Downburst damage shrouded much of the tornado’s path, but a microburst inside of the tornadic swath is highly unusual. This was also a feature noted by Dr. Fujita in his study of the Teton Wilderness tornado.

Soon after passing beyond the stationary vortex mark, the tornado reached a maximum width that I estimate to have been around 1,320 yards, or 0.75 miles. It is probable that maximum intensity was also reached in this area, as vast swaths of forest were completely and totally wiped out. Most trees were not uprooted but snapped off at the middle, with some snapped much further down and the stumps were torn up from the ground. The trees were a mixture of mostly Engelmann Spruce and some Lodgepole Pine. Some of the trunks were easily in excess of two feet in diameter, though more precise values than that cannot be taken from aerial imagery.

The tornado narrowed dramatically as it continued to lower elevations to 600 yards in width, but produced features that required consultation with NWS Intern Nick Wilkes. Nick is responsible for the documentation and rating of tornado damage within the NWS State College warning area. He suggested that the apparent small pockets of intense tree damage outside of the primary tornadic path was not straight-line winds or microbursts. He theorized these were parallels of features noted in the 1944 Shinnston WV, F4 tornado. Here is a quote from the summary on that tornado: “The aerial flyover by the Weather Bureau indicated that there were possible satellite tornadoes that were spawned by the Shinnston twister. ‘In some places, it had the appearance as if a small tornado had been formed out from the main path, pulled up a few trees, and then broke up, as the main path remained distinct.’ This description precisely matches what is seen below.

The tornado weakened slightly and now encountered its greatest test yet as it descended from 10,000 feet into a valley of around 8,000 feet. A satellite tornado briefly formed on the southern fringe and merged with the tornado as it moved downwards. The damage was intermittent and after 21 years unable to be consistently mapped through the valley. An unnamed river also snaked along the bottom of the valley, further complicating analysis with the addition of flooding damage. This is the end of the second officially noted area of blowdown, which was said to include approximately 660 acres of forest.

The vortex was slammed by a wall of rock over 2,500 feet tall on the other side of the valley. And yet, the damage path, albeit much weaker, could be noted climbing that nearly vertical obstruction and continuing at higher elevations. This is possibly the greatest topographical challenge faced by any tornado in recorded history. Of note is that the majority of the treefall was pointing uphill in the opposite direction of the forward motion as the tornado descended and weakened. Usually, tornadoes strengthen when rapidly descending in elevation.

Soon after, the damage swath became impossible to track due to the complete lack of any trees as it crossed over a high mountain ridge of up to 11,779 feet in height. This peak is immediately north of Bills Lake. Three and a half miles later, the tornado descended below the treeline. Here, the swath was once again unmistakable, with a maximum tornadic path width exceeding 700 yards.The path continued for about three and a quarter miles through straight forest and crossing a road. A scout troop, about to make camp on a lake along the fringe of the path, saw the storm coming and moved to safer ground. No one was injured, but four of their vehicles were damaged, including a truck crushed under falling trees. They measured hail up to one inch in diameter at their location. 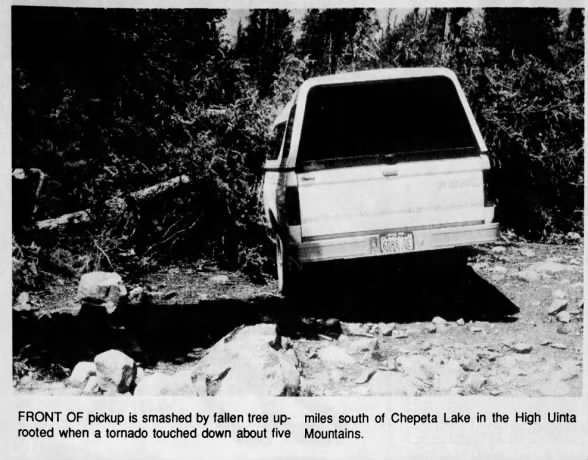 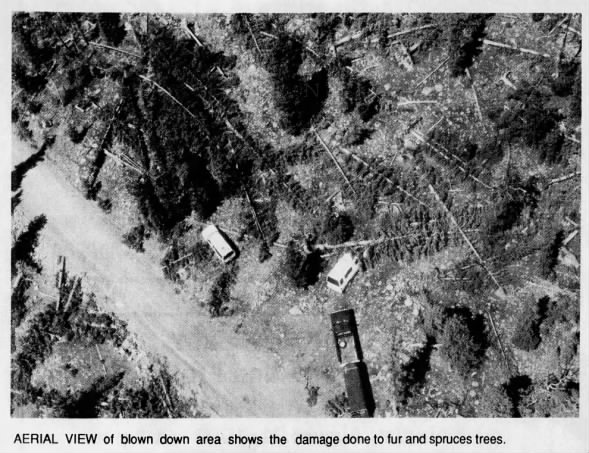 Damage became more sporadic after striking the camp of the scout troop. The tornado crossed the White Forks River, climbed up the other side, and dissipated soon after about a mile west of Cliff Lake. This final area of blowdown was said to include approximately 307 acres of forest.

It is necessary to mention that Thomas Grazulis in Significant Tornadoes rates the tornado as an F1, with no indication as to why he rated it as such. This is one of the few times you will see us completely disagree with Grazulis. The totality of and severity of the tree damage detailed above is comparable, if not worse than many other F3+ tornadoes. This includes the Teton Wilderness Tornado of 1987. In that tornado, Fujita personally rated a much less impressive stationary vortex mark as F4 damage. This, combined with the aforementioned possibility that F4 winds may be needed to produce F3 damage at altitudes that were somewhat lower than those seen here, is conclusive evidence in the opinion of Tornado Talk that this tornado could not have been an F1. In fairness, the tools we have at our disposal today to document this tornado were not readily accessible back when Significant Tornadoes was published.

The first tornado tracked for approximately 0.7 miles and the second tracked for 16.6 miles. The maximum width of the first tornado was 350 yards, and the maximum width of the second was 1,320 yards. The second tornado tracked from elevations of a minimum of 8,015 feet to a maximum of 11,779 feet. Both were likely in the significant (F2+) category, but the second was significantly more powerful than the first. The second tornado is the highest altitude tornado to ever produce F2+ or F3+ damage, and one of the highest elevation tornadoes in history. It is also the strongest tornado ever recorded in Utah. I talked with Allen Huber of the Ashley National Forest Service about the ecological impact. I was told that it would still take “multiple decades” for the fallen trees to completely decay at this climate and altitude. He also estimated it would be one to two hundred years before the tornado scar is obscured by new growth. To this day, the tornado scar is still starkly and plainly visible as an ugly mowed streak through the formerly green forest, high among the mountains in the High Uintas Wilderness. 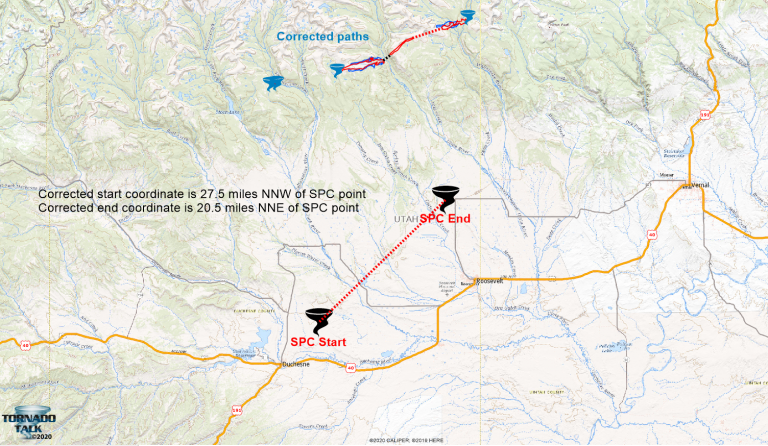 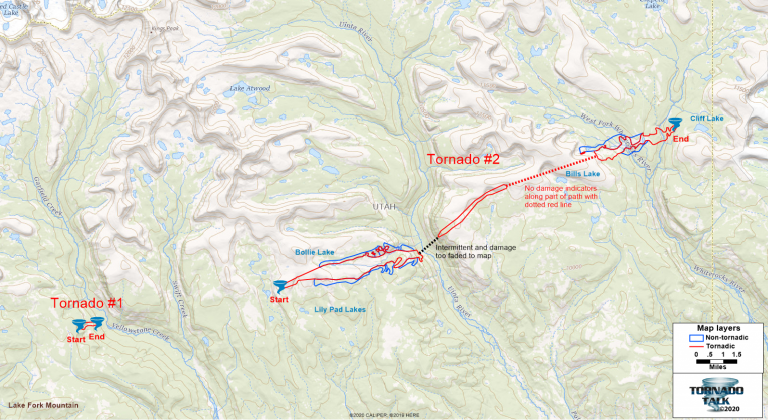 We gathered information for this event from the SPC & NCDC Databases, high-resolution satellite imagery and Thomas Grazulis in Significant Tornadoes and found the following differences:

The Teton-Yellowstone Tornado of 21 July 1987