31 tornadoes occurred on December 23, 2015.  The strongest and deadliest of the day was a long track EF-4, the second in a tornado family that caused damage through parts of northern Mississippi into southeastern Tennessee.

Per the SPC, this tornado began in SE Tate County, MS. However, satellite imagery shows powerful but sporadic microburst damage to the forest in this area, with no evident tornado swath until just after crossing into Marshall County and 2.9 miles SE of Chulahoma. The tornado began to rapidly intensify, blasting trees down in highly convergent patterns and rolling a mobile home. Just two miles after the tornado formed, it had become powerful enough to hurl snapped and debarked trees in excess of 60 feet long into fields and violently scour the ground. Low lying shrubbery was also ripped up and shredded. Several poorly constructed homes were completely destroyed in the Chulahoma area, and a church partially collapsed.

The tornado grew to over 1,600 yards in width (9/10ths of a mile) and completely destroyed the Marlow Church of Christ. Damage to the structure was estimated to be around EF4 strength. Several more homes were severely damaged or destroyed near the church. Several mobile homes were also disintegrated. A 12-year-old boy was thrown 300 yards from one of these trailers and miraculously survived. Sadly, nearby, a 7-year-old boy was killed when the tornado struck the car he was in. 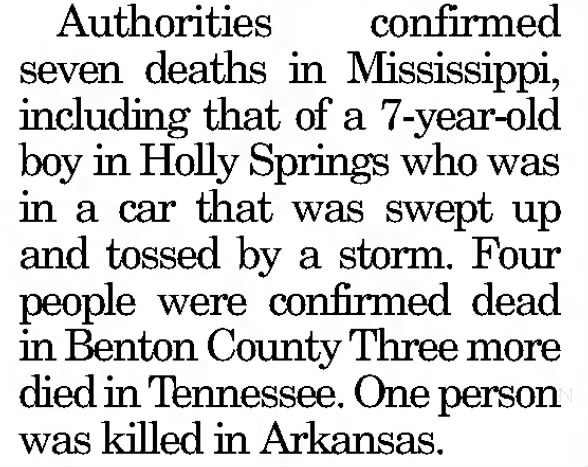 The most impressive tornado damage in 2015, if not the most impressive ever recorded in the month of December, occurred as the tornado moved through the Holly Springs Motorsports Park. The surveyor, Meteorologist Chris Lisauckis of Eyes to the Sky Environmental Services, said it was some of the most intense damage he had ever seen in his 24 years of experience. He believed it was indicative of at least a highest level EF4. Three cinder block restrooms were destroyed. Two were wiped clean with all plumbing fixtures removed. A two-story cinder block office building was also completely destroyed. A 15-ton motor home was bounced roughly 110 yards and deposited on the remains of the building, and shredded vegetation was plastered against the foundation. Multiple large vehicles were moved more than 220 yards. Trees and smaller vegetation (including juvenile southern pines, which are highly resistant to tornado winds) were stripped and partially debarked. A drinking straw was embedded in a tree. As much as several inches of topsoil was removed by the tornado. Intense granulation of even strong building materials was also noted. A well-anchored steel frame garage was swept cleanly away. This included even a large anchored steel engine winch. The concrete around the anchor bolts of the engine winch was left fractured. Large aluminum grandstands were twisted into spiral lumps of metal and thrown over 500 yards. Perhaps most impressively, a 25-foot section of steel-reinforced dragstrip safety wall was knocked loose and split, most likely from a large vehicle impact. Satellite imagery indicated that a badly warped cargo container was moved 620 yards from where it had been sitting just beyond the Motorsports Park. The owner of the track, Terry Forsythe, was interviewed by Dragstrip Illustrated. He shared a remarkable story about one of his possessions that was taken by the tornado:

“The real ‘Twilight Zone’ moment happened when I received a call from my mother’s first cousin several days after the tornado, telling me that my mom’s obituary was found in their yard. My mom died in October a couple months before the tornado and the funeral home made me this nice laminated copy of her obituary. I kept it in my Bible as a bookmark. After the tornado, my Bible was never found, but my mom’s obituary landed in her first cousin’s yard, 70 miles away in the town of Parsons, Tennessee.”

Almost all of the tornado’s remaining path in Mississippi was through unpopulated areas of Marshall County. It was also smaller and weaker during this time. In the county, there were 2 fatalities and 36 injuries. Roughly 200 homes sustained some form of damage.

Almost immediately upon crossing from Marshall into Benton County, the tornado once again intensified. It remained about 900 yards across (½ of a mile) with an extremely intense core only 35-60 yards in width. Peak intensity was likely reached three miles west-northwest of Ashland near the intersection of Cherry Brown and Lamar Roads. Many cars were hurled far distances, with a few being rendered completely unrecognizable. A pickup truck’s body was severely mangled, and this itself had been torn from the chassis. The engine block was also torn from the body and chassis and deposited elsewhere. Large areas of low lying shrubbery were annihilated. Extreme pockets of ground scouring and gouging were plainly visible on satellite several months later, and several homes were wiped out. There were several fatalities in this area. A 40-yard long section of asphalt on Lamar Road was removed and repaved after a large portion was ripped out.

Several more homes were swept away in very rural portions of Benton County, along with continued sporadic ground scouring and severe tree debarking. The tornado may have weakened slightly as it struck a large, “well-built” two-story home 8 miles northeast of Ashland. The slab was almost entirely wiped clean including fixtures and a large portion of sill plating and flooring. This structure was given an EF4 rating. The tornado reached its maximum width, 1,880 yards (a little over a mile across), in this area. There were six fatalities in Benton County. Despite reports of injuries, none are officially listed in Benton County. In addition, 17 homes and 15 mobile homes were destroyed, with 15 homes and three mobile homes suffering major damage.

The tornado gradually lost much of its strength as it moved through Tippah County, MS. Several homes were damaged in the Three Forks Community. Over 100 homes were affected in this county and there was one fatality.

The tornado moved across the state line state lines into Hardeman County, TN. A large metal agricultural building was destroyed at EF3 intensity. Analysis of satellite imagery taken several months after the event indicates the original tornado almost certainly dissipated about 1.25 miles south of Pocahontas. The Damage Assessment Toolkit (DAT) shows a 20-mile gap in this area without any surveyed damage points, so it is likely this was missed. A second swath of tornado damage began out of a cluster of microburst felled trees about 5.7 miles northeast of Pocahontas in McNairy County TN. This relatively intense swath of tornadic tree damage was mostly relegated to forested wilderness areas before scraping southern portions of Selmer near the end of its life. 15 homes were damaged or destroyed south of Selmer, with EF3 damage noted to a poorly anchored home. This probable second tornado dissipated after a 9.4-mile track, achieving a maximum width of 660 yards (slightly over 1/3rd of a mile).

Note: A special thanks to Meteorologist Chris Lisauckis of Eyes to the Sky Environmental Services for providing us with some amazing photos. 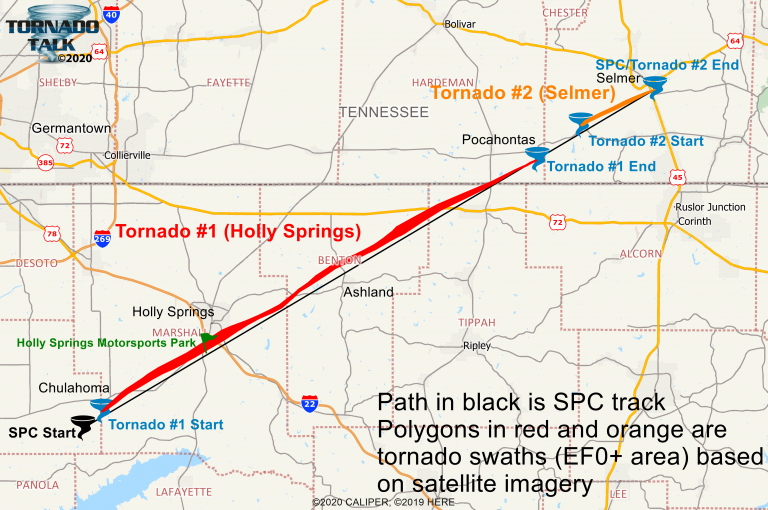 Just talking with woman whose aunt's home was just hit by this tornado in Holly Springs #mswx pic.twitter.com/UoSL6iQoZC

Tornado was so powerful that it ripped up the pavement on Lamar Rd. in Benton county Miss. #tornado #3onyourside pic.twitter.com/KYFbt8HdQR

Tornado destroyed this church in New Town just outside of Holly Springs. pic.twitter.com/pOUmn6jSqy 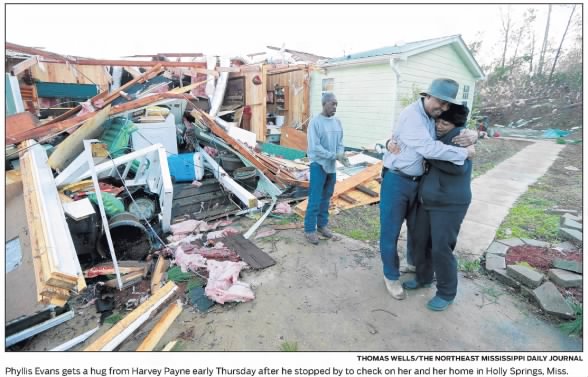 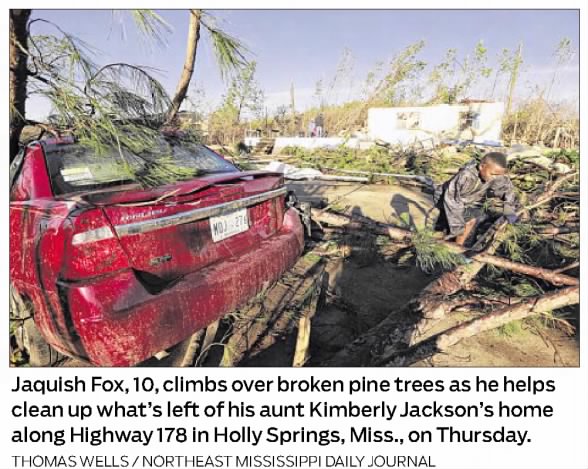 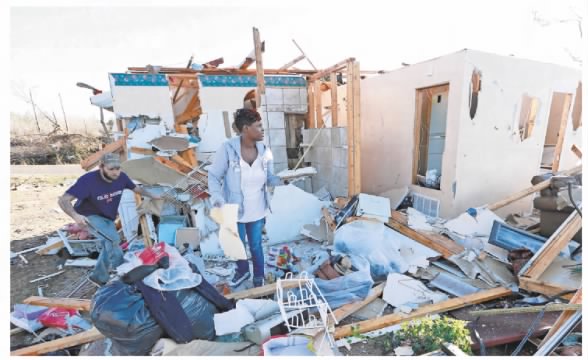 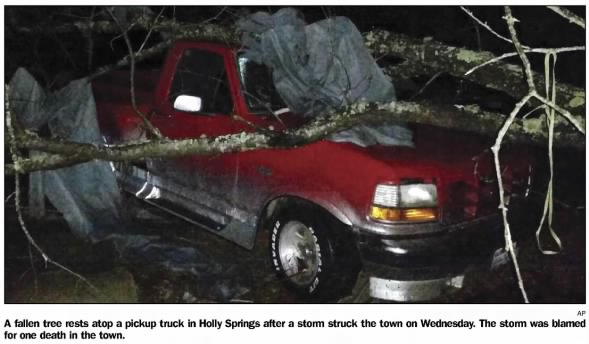 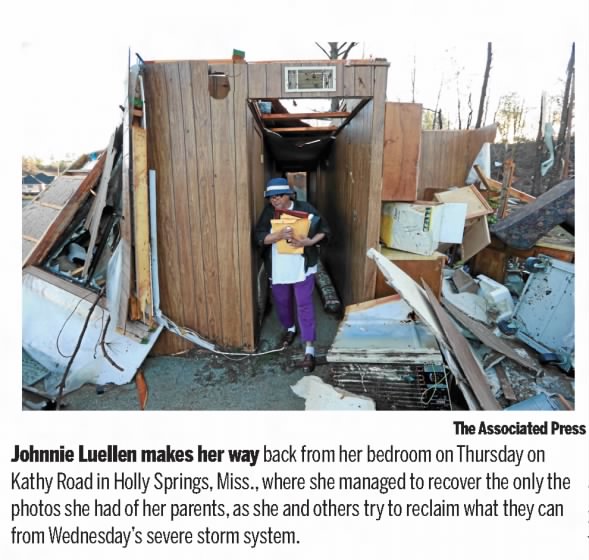 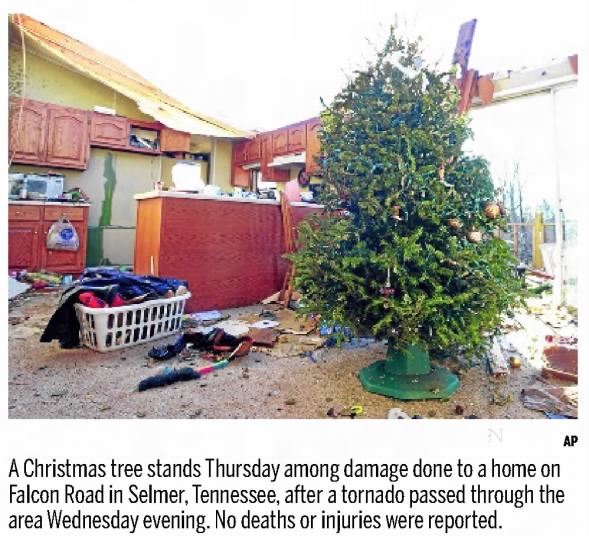 We gathered information for this event from the SPC and NCDC Databases, the December 2015 Storm Data Publication, the NWS Memphis Summary, the DAT, and analysis of satellite imagery by Nelson Tucker and found the following differences:

“As It Happened: Bryant: Seven People Killed in Miss.” The Clarion Ledger, The Clarion-Ledger, 24 Dec. 2015.

On the Road: Holly Springs Motorsports