Per the Storm Prediction Center (SPC), 22 tornadoes occurred on August 24, 2016 across parts of Indiana and Ohio. Two tornadoes were also recorded in Ontario, Canada. This was a record-setting event in several ways.

This significant event was certainly one for the record books and it caught many by surprise. The Day 1 Convective Outlook issued by the SPC at 8:52 am EDT had a marginal risk of severe storms possible across parts of The Midwest but no highlighted tornado risk.

Their update at 12:19 pm EDT showed an increase in the threat for severe storms further east, mainly along and south of the I-70 corridor, but the tornado threat remained under 2%.

The first tornado of the day was confirmed at 2:38 pm EDT in Montgomery County, IN. How did this unexpected outbreak occur?

Two days after the event, meteorologist Jeff Frame wrote an excellent post-analysis of this event for U.S. Tornadoes. I highly recommend the entire article. I will only give a synopsis of his findings here. His review of the meteorological factors present on August 24, 2016 shows that tornadoes were possible across Indiana and Ohio and even a significant tornado could have formed. There was too much uncertainty though on whether or not supercells would form in the environment over this area.  A similar atmospheric set-up was in place over parts of Kansas and Missouri and a small tornado risk was placed there.  No tornadoes formed but there were isolated supercells.

He also reviewed the numerical weather prediction (NWP) models of the atmosphere. Of the models examined, the one that showed the best chance for supercells across Indiana and Ohio was the North American Mesoscale (NAM) model that was initiated at 8am EDT that morning. It did not however show precipitation over eastern Illinois during the morning of August 24. Per the radar loop below, there was in fact precipitation that morning moving from IL into IN.

Here is a snapshot of Jeff Frame’s key takeaway from this event.

Despite the fact that this was essentially a “surprise” to many, the warnings issued by the area National Weather Service Offices were excellent. They were timely and helped to save lives on this day. There are so many intricacies involved with weather forecasting and even though we have seen such great strides in model development and analysis, there are still many more advancements to be made.

This summary will give an overview of the tornadoes that were confirmed in Howard County, IN on this day. The main focus will be on the strongest to occur in this area. It was given a rating of EF3 and hit the town of Kokomo.

The National Weather Service in Indianapolis documents a total of seven tornadoes across portions of Central IN on this day, 5 of which moved through parts of Howard County. The strongest moved across the southern parts of Kokomo between 3:20 pm and 3:34 pm EDT. It was given an EF3 rating and was the 2nd tornado of the day in this area. The first tornado was rated EF2 and traveled just over 5 miles through Montgomery County, south of Crawfordsville.

This tornado began 2 miles NNW of Kokomo Ruzicka Airport. Per the track map in the NWS summary, it traveled ENE across the south side of Kokomo. After crossing Goyer Road, it began more of NE trek and ended SW of Vermont. Maximum winds were estimated at 152 mph.

Near the beginning of the tornado track, the NWS found EF2 damage to a home along W. County Road 100 South. A large section of the roof was removed. The Howard Haven Residential Center at 3600 West Boulevard received extensive damage. The residential center director, Jennifer Brower, protected one of the residents from flying glass by shielding her with her own body. They both received just minor injuries. This video from RTV6 shows an interview with Jennifer and some of the residents 7 months after the tornado.

The tornado’s next stop would be the Markland Mall area near Indiana 931. Some of the worst damage occurred and some of the most memorable.  Watch the video below.

Video of the tornado destroying the Starbucks taken at a Chili’s restaurant by Brandon Mobley.

#NWS on Kokomo Tornado that took down the Starbucks: pic.twitter.com/3xc5CU09RZ

It was here that Starbucks shift supervisor Angel Ramos became a hero. His story is told in the article, “How Starbucks Customers and Partners Survived an Indiana Tornado That Flattened Their Store.” The store manager had called Ramos letting him know that the weather looked threatening. He calmly talked to the patrons of the Starbucks and moved everyone into the safest place in the building, the two bathrooms. Within minutes, the sirens sounded and phones were triggered by the tornado warning for Howard County. The building was smashed but everyone inside survived. The only area of the building still standing were the restrooms.

Starbucks worker Angel Ramos gets a hug after riding out twister with customers in the store's bathrooms.No injuries pic.twitter.com/q88sdyY0ea

Just east of the Markland Mall, significant damage occurred to the Cedar Crest neighborhood on Belvedere Drive. Several homes had collapsed walls. Many had trees on top of them. The tornado seemed to weaken beyond this point and made a bit more of a northeast turn after crossing Goyer Road. It traveled through more rural areas for about four more miles and ended on the other side of Wildcat Creek Reservoir.

Per the NWS, a total of 1,000 homes were damaged, 170 of which sustained major damage. A receipt was found in Marion, IN, 30 miles from Kokomo.

The August 24, 2016 tornado brought back memories to a twister that hit practically this same area only 3 years before.  On November 17, 2013, an EF2 damaged well built homes and other buildings on the south side of Kokomo.

The Other Howard County Tornadoes

As the residents of Kokomo were analyzing the damage, little did they know that four more tornadoes were to occur several hours after this devastating blow. It was a tremendously unnerving time for the community. At 5:40 pm EDT, another tornado moved out of Carroll into northern Howard County. It would track from near Carrollton to Cassville. This tornado remained north of Kokomo. It traveled 17.24 miles and was rated EF1. Several barns sustained partial wall and roof damage. One garage slid off its foundation. There was tree damage along the path.

At 6:58 pm EDT, a brief tornado hit near Indian Heights. This is a neighborhood in southern Kokomo. The twister hit approximately four miles south of the EF3. The Indian Heights tornado was rated EF0 with max winds speeds of 80mph. There was tree and minor home damage.

At 7 pm EDT, another brief tornado caused EF1 damage near Russiaville in SW Howard County. The path was estimated at 1.5 miles and was mainly over open country. Trees and crop damage was seen along the path and at least one garage sustained damage.

The last tornado of the day in this area formed at 7:16 pm EDT south of Kokomo along the Howard/Tipton County line near Chippendale Golf Course. It tracked to the ENE staying south of Indian Heights. It lasted 5 minutes and was rated EF0. The tornado bent a road sign, damaged a billboard and caused tree damage. 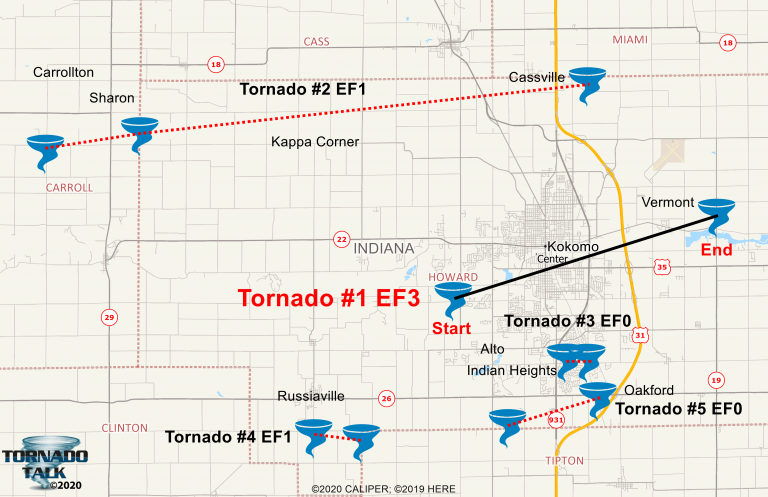 Aerial Photos of the Damage via the Indiana State Police

Photos from The Salvation Army Indiana Division via Flickr 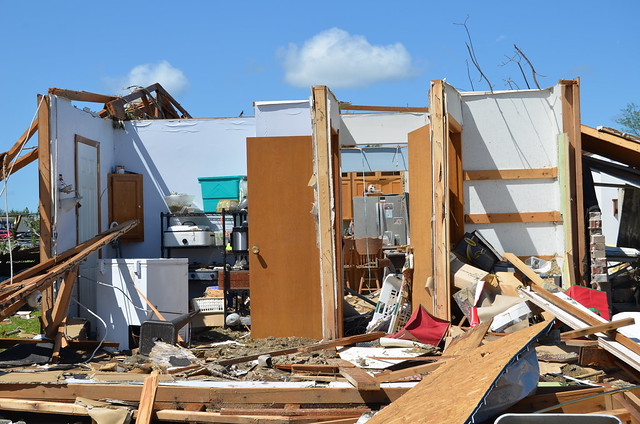 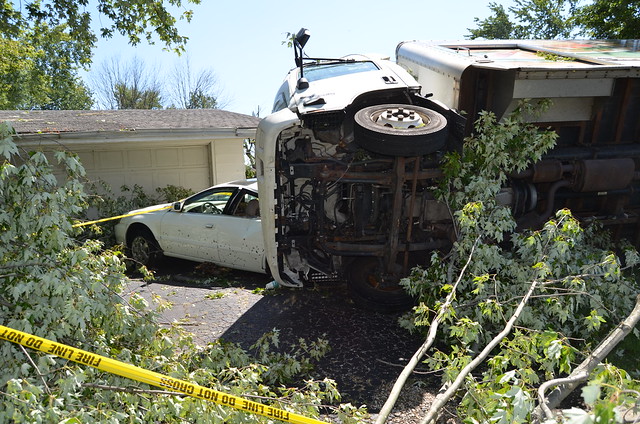 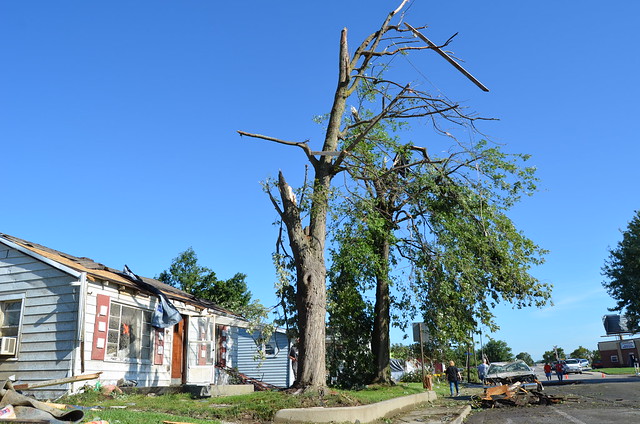 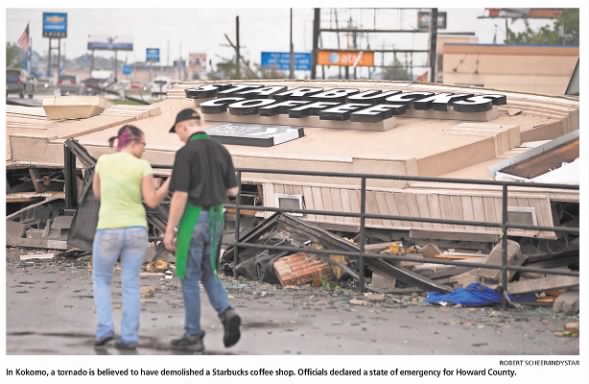 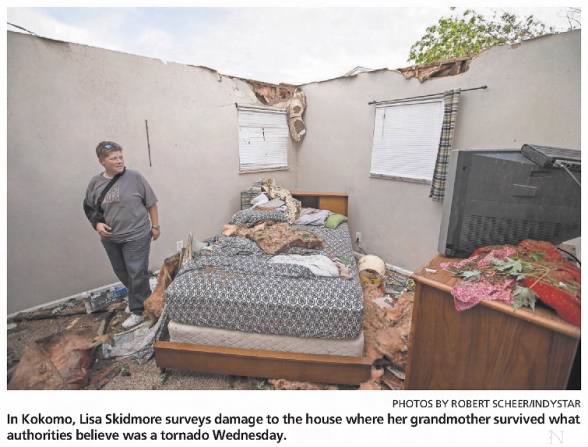 “This is how the ‘surprise’ Indiana and Ohio tornado outbreak of August 24, 2016 happened”. Jeff Frame – U.S. Tornadoes

How Starbucks Customers and Partners Survived an Indiana Tornado That Flattened Their Store. (n.d.). Retrieved August 23, 2020, from https://stories.starbucks.com/stories/2016/starbucks-indiana-tornado/