November 15, 1989 was a heartbreaking day for the city of Huntsville, AL. An F4 tornado hit the southern part of the city crossing through a busy business section and heavily populated residential area at the time of afternoon rush hour. 21 people were killed, 18 died in the tornado and three others later from injuries. 57% of the deaths occurred in automobiles. Per the Storm Data summary, “most of those killed in the cars were in the process of performing normal tasks as opposed to fleeing in or seeking the automobiles for safety.” 450+ people were injured in this tornado event.

The NWS Hunstville has an extensive collection of videos, reports and written interviews on their website. They can be found here.  I was reading through the interviews and this one stuck out to me.  The impacts from a major tornado don’t just last for a few minutes or a few days. They last a lifetime. Here is an interview by the Huntsville Times with James Johnson:

I do not remember the actual tornado. It hit us while we were driving north on the Parkway, and I was knocked out upon impact with the twister. We were just south of Airport Road. The next thing I remember, I was in Huntsville Hospital being asked if I was on any medications, and then I was told to go back to sleep. My late wife, Rosa, was taken to Humana Hospital. She was found laying in a ditch on South Parkway. She died due to her injuries 63 days after the tornado on Jan. 17, 1990.  I was moved to HealthSouth Rehabilitation at the end of November and remained there until the third week of January 1990.  By mid-February, I returned to work on Redstone Arsenal and worked up to four years ago, at which time I retired. With age creeping up on me, my injuries have placed me in a wheelchair most of the time.  This has been my life for the past 20 years.

A devastating tornado struck the southern portion of the City of Huntsville cutting a swatch of destruction from southwest toward the northeast through a business section and a heavily populated residential area.  Twenty-one people died and 463 people were injured as a result of the tornado.  Eighteen people died in the tornado, and three others at later dates, from injuries stated in the tornado.  Total damage estimated were place at around $100 million.

The tornado struck during the beginning of rush hour in Huntsville and, while at its strongest, moved through a business area, crossing two major north-south highways.  Twelve of the 21 deaths (57 percent) occurred in automobiles.  Most of those killed in the cars were in the process of performing normal tasks as opposed to fleeing in or seeking the automobiles for safety.

The initial point of damage occurred 1 mile south-southwest of Madkin Mountain on the Redstone Arsenal.  The tornado continued northeast, striking the Huntsville Police Academy and crossing the municipal golf course.  The tornado entered a business and heavily populated area of Huntsville along and near US Highway 231, a major north-south traffic artery.

The tornado then moved up Garth Mountain as it continue northeast into a heavily wood section.  It moved down the east side of the mountain, then struck Jones Valley Elementary School  Thirty-seven children, five teachers and seven painters were in the school when the tornado struck.  The children were moved from the second floor of the school building into a small open area under a stairway.  This action saved the lives of the children.  One person, a woman, was killed in an automobile while driving along a nearby road enroute to the school

From the school, the tornado crossed Garth Road and moved across a portion of Jones Valley subdivision, a development of well-constructed single family homes.  The tornado destroyed a number of homes here.  It continued across Jones Valley then moved up Huntsville Mountain, generally a rural area, destroying whatever structure it encountered.  The tornado topped Huntsville Mountain and moved down the east side, crossing US Highway 431.

Continuing, it later crossed US Highway 72 one mile southeast of Brownsboro.  The tornado continued to a small lake at the headwaters of the Killingsworth Cove Branch, a small creek which feeds into he Flint River.  The tornado path ended at the southeast tip of this small lake.

The following is a summary of damage from reports gathered by the Huntsville Times: 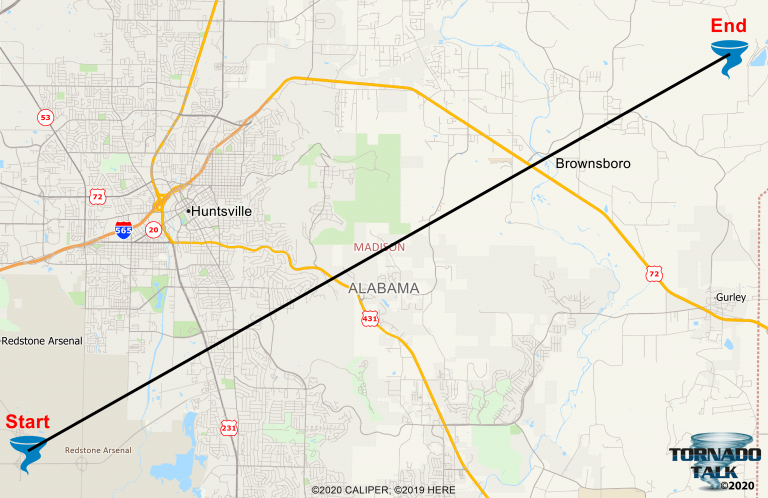 Radar and Damage Photos via NWS 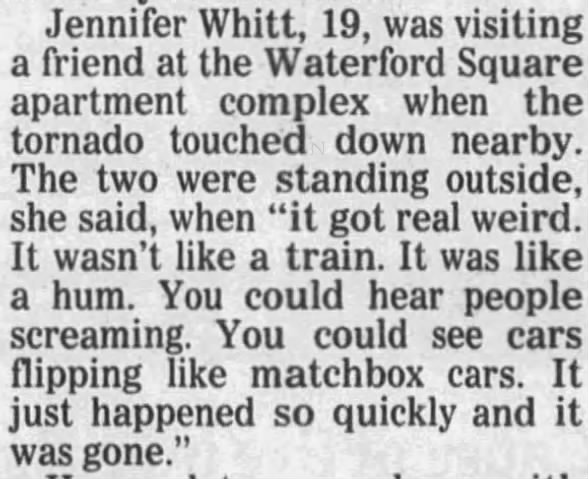 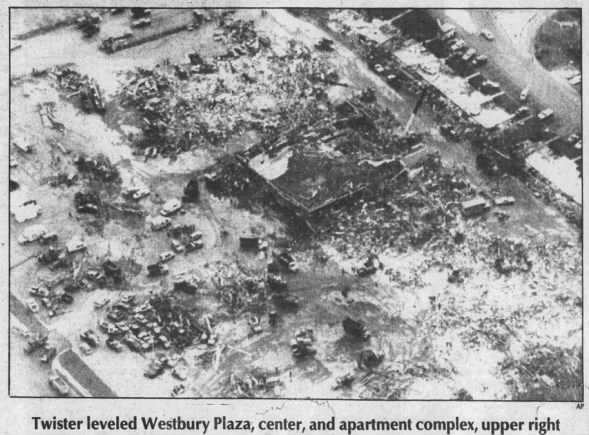 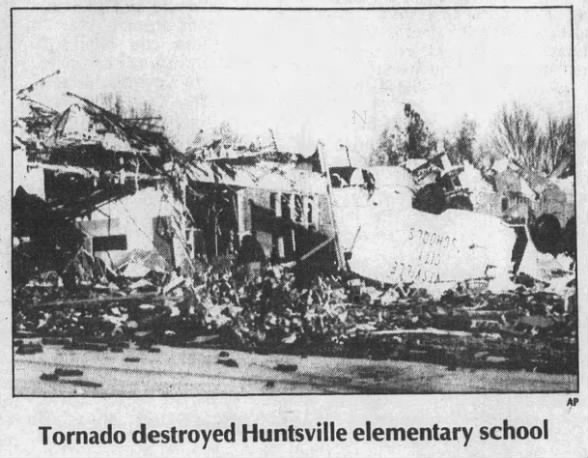 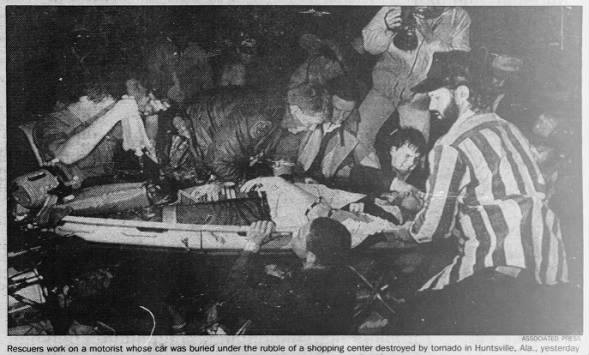 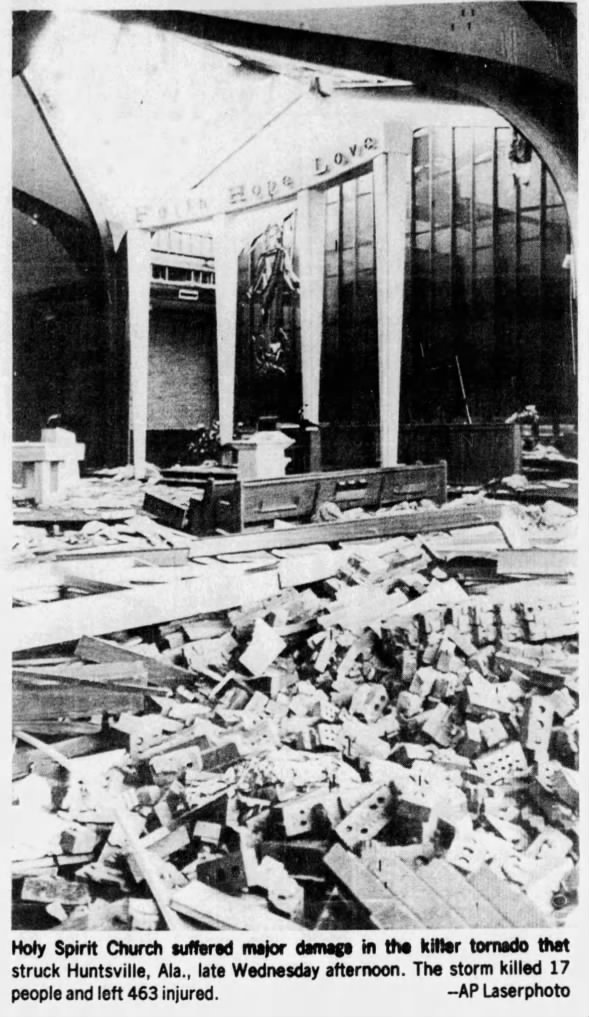 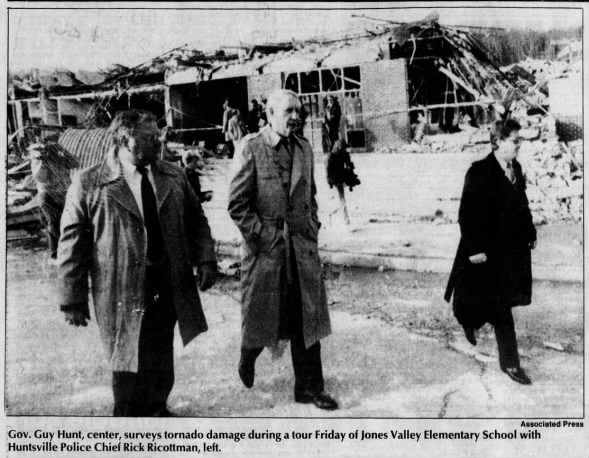 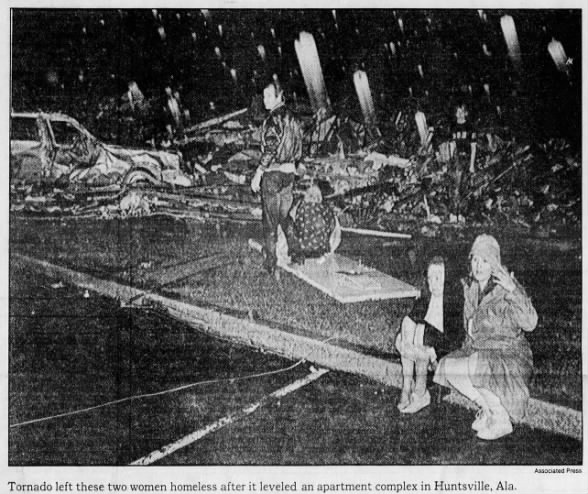 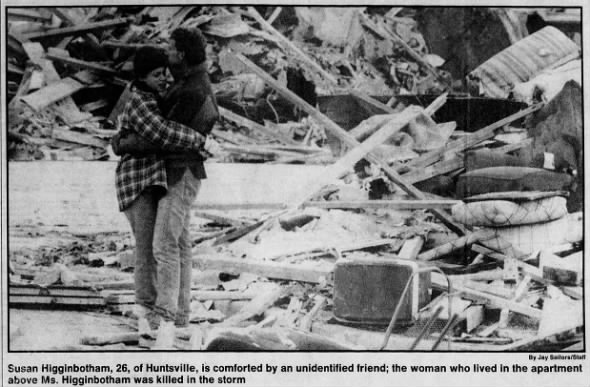 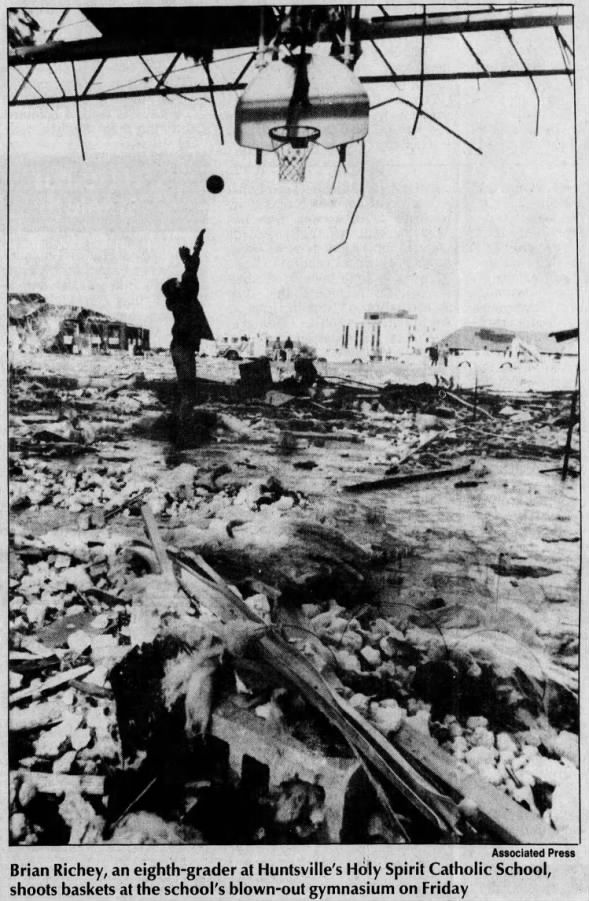 We gathered information for this event from the SPC & NCDC Databases, the November 1989 Storm Data Publication and Thomas Grazulis in Significant Tornadoes and found the following differences:

NWS Huntsville Summary of the Event