An F4 tornado made a non-continuous trek of 29-30 miles across parts of Marion, Hancock, Madison and Henry counties on May 14, 1972.  I did a search through the SPC Database and only found 2 F4 tornadoes that have ever hit parts of Marion County, IN.  One in 1998 and this one in 1972.

The tornado began 8.5 miles east of Monument Circle, the center of downtown Indianapolis.  It ended at Mechanicsburg.  Per Storm Data the length of observed ground damage was 8 miles and the twister traveled at 25-30mph.

Per Storm Data:  Close to 70 homes were destroyed or damaged in Marion County, “some to kindling wood.” In the 1400 block of North German Church Road, “twigs were embedded in tree trunks and two 1 X 6 boards were driven into the ground with such force that two men could not remove them.”

Thomas Grazulis in Significant Tornadoes noted that there was F4 damage at 16th and German Church Road.

First ground contact was in the 9700 block of E. Washington Street which is 8.5 miles east of Monument Circle—the center of downtown Indianapolis.  The first segment of damage path was 3 miles long and 200-300 yards wide.  The tornado was seen by a number of people and pictures were taken showing another funnel cloud.

The non-continuous path was to the northeast for 29 miles, ending at Mechanicsburg.  Length of observed ground damage was 8 miles.  Speed of travel was 25 to 30 mph.  Surprisingly no people were killed although 68 homes in Marion County alone were destroyed or damage, some to kindling wood.  Some houses were new and not yet occupied.  Property losses are estimated at 2 million dollars.

Important facts concerning the destruction as reported by Meteorologists Edward T. Sjoberg and Richard D. Hickey of the Indianapolis Weather Service Office are as follows:

The tornado lifted and crashed down again at Mt. Comfort.  This sement of the path was 600 feet wide and 1 mile long.  Clocks stopped at 12:25pm.  A railroad car was tipped over to the south while a string of six boxcars were moved a half mile down the track.

The next touchdown was one mile northwest of Eden in an area 1 mile long and 300 feet wide.  Mr. Gerald Titus, in escaping the tornado, came upon 3/4 inch hail, one inch deep, on the road 3 miles north of the tornado path.  Time was 12:45pm.  Near Eden house roofs were damaged, trees up to two feet in diameter were uprooted, a boat and motor were blown away and a camper was wrapped around a tree.

Northwest of Markelville, at about 1:10pm, several mobile homes were severely damaged.  The last dip of the twister was near Mechaniscburg where a barn was unroofed. 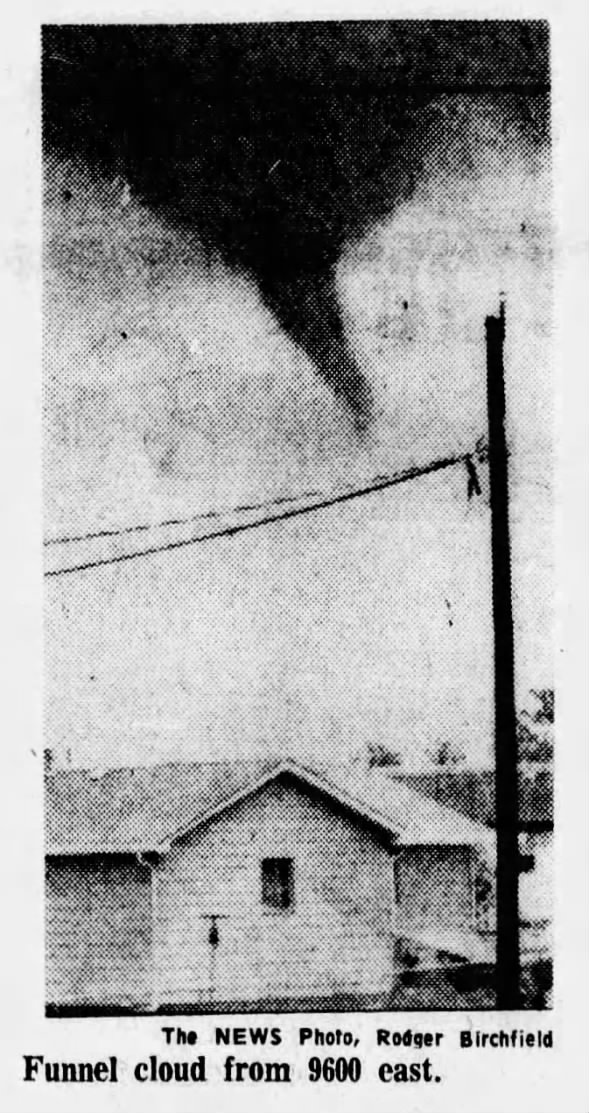 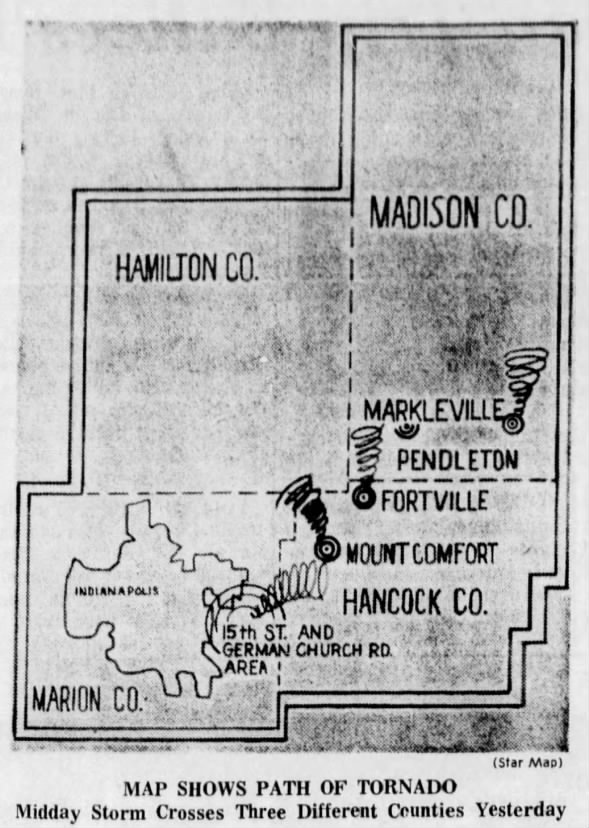 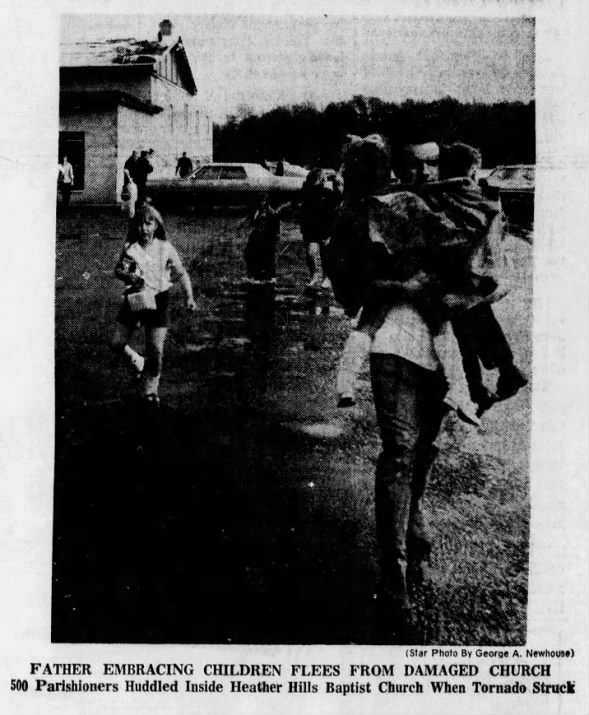 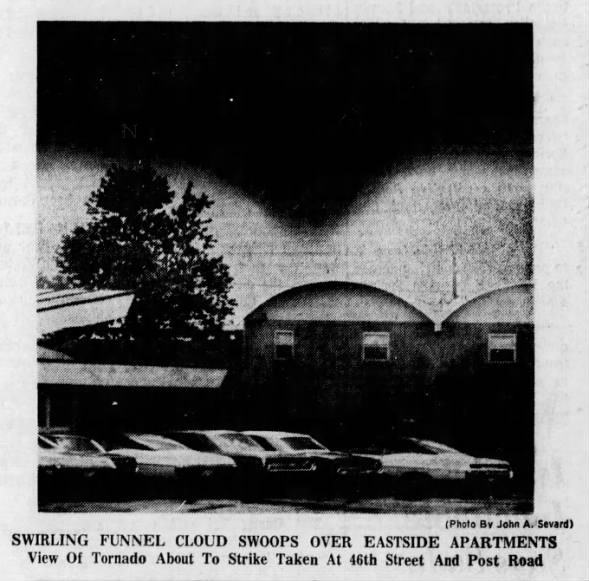 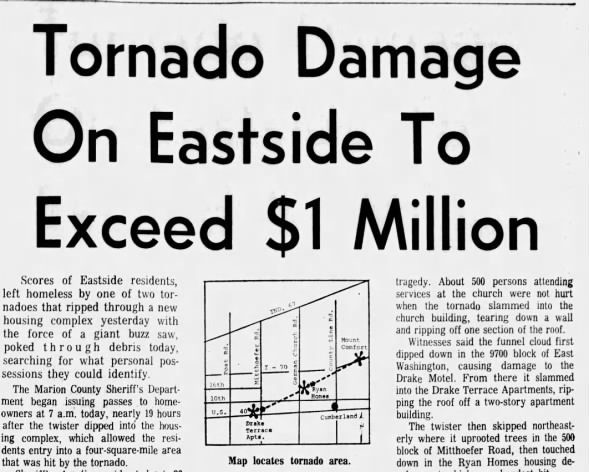 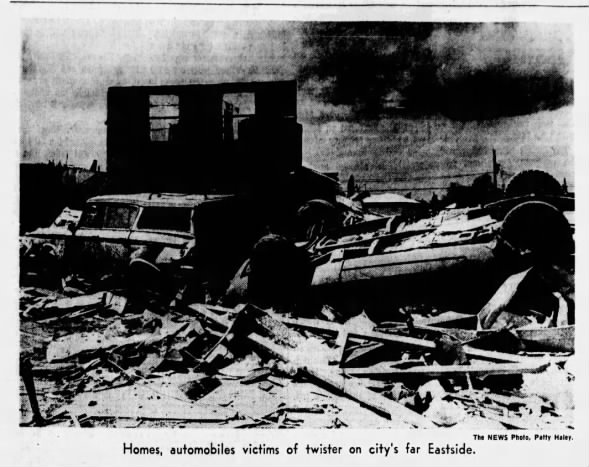 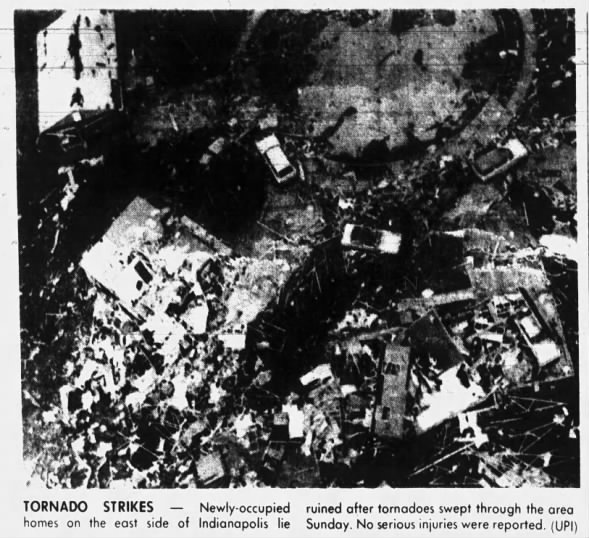 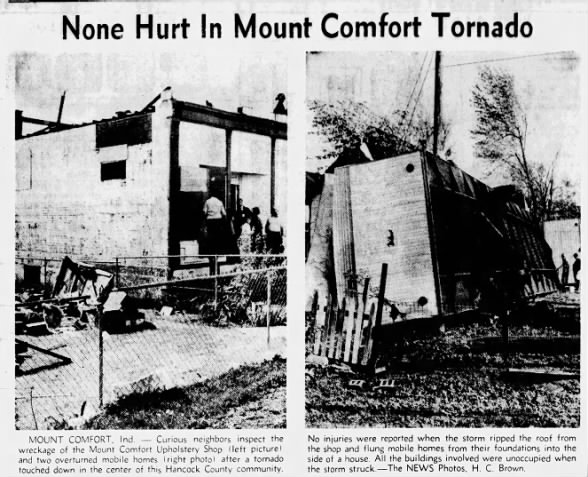 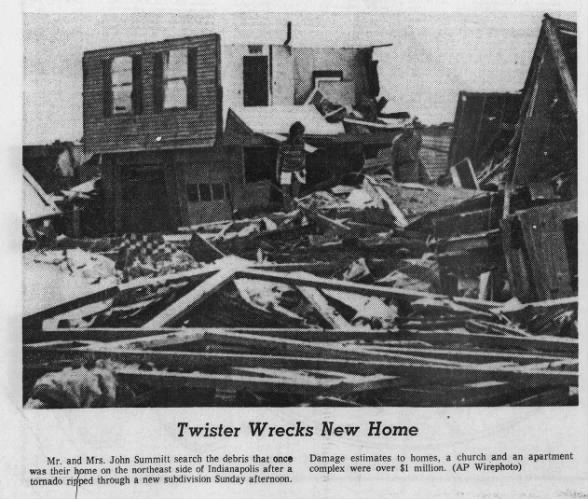 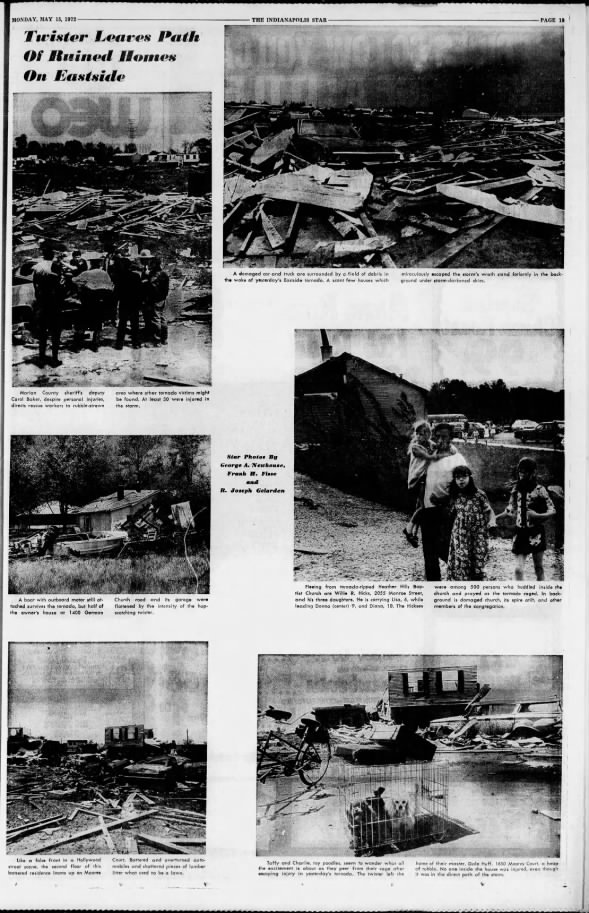