Thirty tornadoes were reported across parts of four states on January 24, 1967. Two in Missouri were given an F4 rating. This summary focuses on what the National Weather Service deems the 4th worst tornado in history to hit the St. Louis Metropolitan Area. It is also the last F4 tornado to affect St. Louis. Read the full summary here!

January 24, 1928: Grazulis documents an F1 tornado that moved one mile, six miles north of Smithville, TN. Tragically, it hit a school. One teacher and 21 children were in the building. “Four children in one corner of the building were killed, and six were injured.” 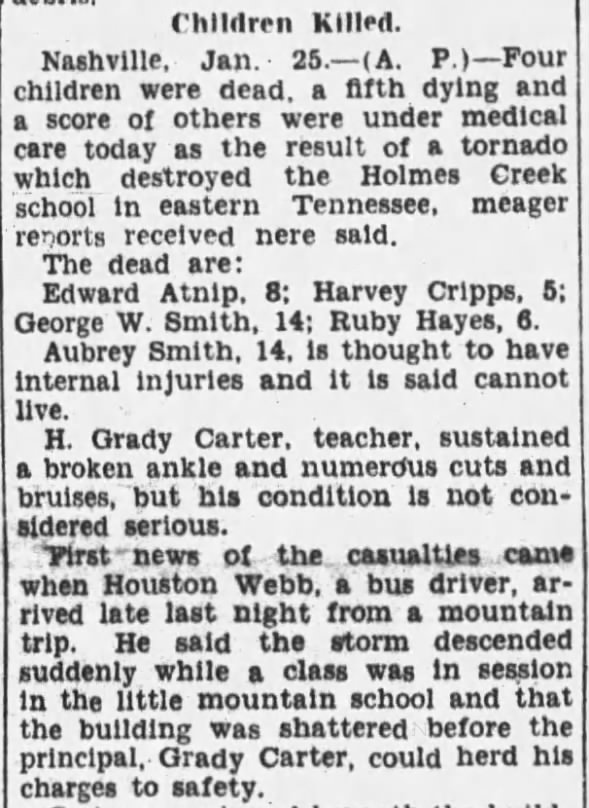 January 24, 2019: An EF0 touched down for 1/2 mile near Lake Monroe, FL. Several trees were knocked over, two rail cars were flipped, and some buildings had minor damage. Source.

A blizzard blasted the Mid-Atlantic and Northeast on January 23 and 24, 2016. Over 3 feet of snow in some locations and 55 people were killed. Source.

On this day in 1984, Apple Computer Inc unveils its revolutionary Macintosh personal computer Check out more historical events at onthisday.com!

On this day in 1874, Winston Churchill, British statesman, orator, and author who as prime minister (1940–45, 1951–55) rallied the British people during World War II and led his country from the brink of defeat to victory, was born in lenheim Palace, Oxfordshire, England. He died in 1965. Source:  Britannica.

On this day in 2005, Country singer Lynn Anderson was arrested for shoplifting after being caught stealing a Harry Potter DVD from a New Mexico supermarket and punching a police officer during her arrest. The 57 year-old had the 1970 Top 5 hit ‘Rose Garden’.  Get into the groove with more music trivia at thisdayinmusic.com!

Photo of The Day