Three tornadoes were recorded for July 1, 1952, all in North Dakota: An F2 in McKenzie County, F3 in Richland County and an F4 that tracked through parts of Burleigh and Kidder Counties. We look at the F4 in this summary. Read the full summary here! 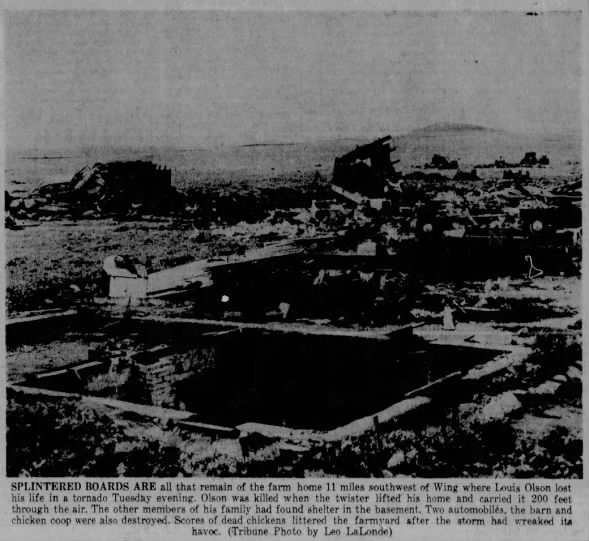 July 1, 1935: Grazulis documents a family of at least 3 tornadoes across portions of McKenzie and Mountrail Counties in ND. He states they were all major tornadoes and gives a rating of F4. Four people were killed and 7 injured. A school was hit at the mouth of the White Earth River. “No trace of the school there was ever found.”

On this day in 2011, an EF2 briefly touched down near Solon Spring, WI. Along the 3-mile path, a few homes were damaged, and one was destroyed. Source.

On this day in 2021, two tornadoes struck Washington, DC. The first one, an EF1, touched down in Arlington, VA, and tracked east for 4.4 miles, crossing the Potomac and across the National Mall, dissipating near the Washington Monument. Numerous trees were downed, and temporary fences near the White House’s Eclipse for the 4th of July fireworks were destroyed. Per the NWS, “The fencing appeared to have been “lifted up and twisted, landing in a mangled and haphazard manner.” The Second tornado, an EF0, touched down briefly for one mile in the H Street Corridor neighborhood, causing tree damage. Source.

The National Mall got walloped my tonight’s storm. Trees are down everywhere, including this one into Constitution Ave near the Lincoln Memorial @nbcwashington @afruin pic.twitter.com/FoocpjZw4b

On this day in 1998: European Central Bank is founded in Brussels to define and execute the European Union’s monetary policy. Check out more historical events at onthisday.com!

Missy Elliott, was born July 1, 1971, in Portsmouth, Virginia, U.S. She is a rapper and music producer who made a mark on the male-dominated hip-hop world with her talents for writing, rapping, singing, and music production. Source:  Britannica.

On this day in 1939: First major boxing match on US television is the heavyweight bout from NY’s Yankee Stadium between former world champion Max Baer and Lou Nova; Nova wins by TKO in 11th round. Get more daily history at onthisday.com!

On this day in 2009: The week after Michael Jackson’s death, the singer dominated the Top Ten of Billboard’s album chart. Leading the pack was Number Ones, followed by The Essential Michael Jackson at No.2, Thriller was No.3 and Off The Wall was No.4. The Jackson 5’s Ultimate Collection held the No.5 spot, Bad was No.6, Dangerous was No.7, Greatest Hits – HIStory – Vol. 1 came in at No.8 and Michael’s Ultimate Collection occupied the No.9 position. Collectively, Jackson’s solo albums sold 415,000 copies for the week, 58% of which were digital downloads. The week before his death, his titles sold a combined 10,000 units. Get into the groove with more music trivia at thisdayinmusic.com!