It was a day that came to be known as “Black Friday”. On July 31, 1987, one of the most powerful tornadoes in Canadian history struck Edmonton, Alberta and parts of Strathcona County. It is the deadliest known tornado for Alberta and the second-deadliest for the country. This significant tornado was given a rating of F4 with maximum winds estimated at 260 mph. This tragic event led to the development of Alberta’s Emergency Public Warning System (EPWS), which would be implemented in 1992. Read the full summary here!

July 31, 1927: An F3 tornado moved through portions of Bristol County, MA. “A man was killed when a carriage house was thrown into his car and the car was thrown into a tree at Rehobeth.” Two homes and a general store all lost their roofs.

On this day in 2018, an EF1 tornado tracked nearly due north through Toledo, causing mostly minor damage. An SUV was lifted and spun around. Source.

On this day in 1949, three baseball players were killed, and 50 other people were injured when lightning struck the ballfield in Baker, Florida. Source. 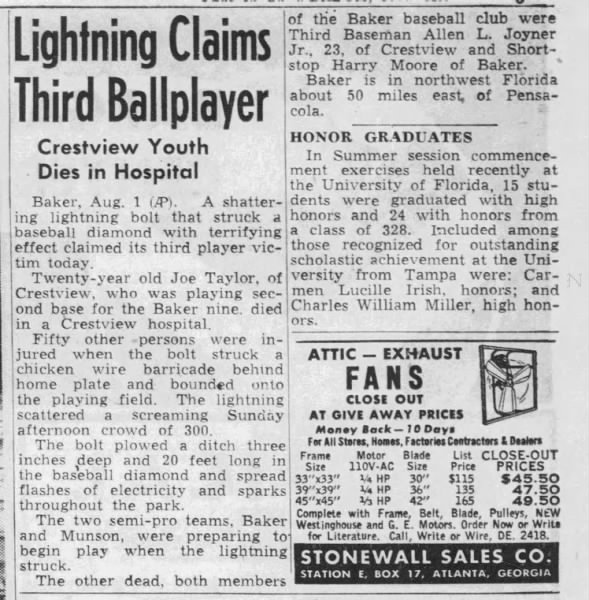 On this day in 1620: Pilgrim Fathers depart Leiden, Netherlands for England on their way to America. Check out more historical events at onthisday.com!

J.K. Rowling was born July 31, 1965, in Yate, near Bristol, England. She is an author, and creator of the popular and critically acclaimed Harry Potter series, about a young sorcerer in training. Source:  Britannica.

On this day in 1912: US government prohibits movies and photos of prize fights. Get more daily history at onthisday.com!

On this day in 1982: Survivor’s ‘Eye Of The Tiger’ was at No.1 on the US chart. The song, which was commissioned by actor Sylvester Stallone for the theme for the movie Rocky III, received an Academy Award nomination for Best Original Song and go on to sell over five million copies. Get into the groove with more music trivia at thisdayinmusic.com!