On June 23, 1944, a historic tornado outbreak occurred across the Appalachians.  This outbreak featured the deadliest tornado to ever strike Pennsylvania and the deadliest ever recorded in West Virginia.  In fact, the only two F4 tornadoes known to have struck the state of West Virginia took place on this day.

This outbreak produced at least 7 tornadoes and we are documenting those in this summary.  We say at least because we have information on 7 significant tornadoes.  It was likely that several weak (F0/F1) tornadoes occurred that were not documented.

3 of the tornadoes were rated F3.  There was one each in West Virginia, Pennsylvania, and Maryland. The Maryland F3 crossed into Delaware where it produced F1 damage.

One tornado in Ohio was rated F2.

These Tornadoes will be listed below in chronological order.

The stats below are from Significant Tornadoes, 1680-1991 by Thomas Grazulis, since the SPC database only goes back to 1950.  Paths were based on the descriptions of start and end locations via Grazulis and from the NWS State College Database.

Per Significant Tornadoes:  “Moved Southeast through rural areas from Rural Valley to Twin Rocks.  There were about 50 homes or farms damaged in Armstrong County, but only one home was destroyed.  There were three injuries there.  Two were killed as 15 homes were destroyed across Indiana County.  Cambria County damage may have been downburst-related.  The damage in all three counties totaled about $2,000,000.”

Additional details from the Indiana Gazette:  The Lutheran Church at Rural Valley was completely destroyed, with the exception of the bell-tower. Hundreds of barns and outbuildings were leveled.  At Willet, two homes were completely destroyed and every other home in town had some form of damage.  Route 119 was blocked from downed trees and other debris.

A big thank you goes out to Sara Stewart of the Rural Valley History website for allowing us to use photos she has of the damage from Rural Valley.  For more photos that were not used in this summary, as well as other historical information on Rural Valley, please visit the website here! 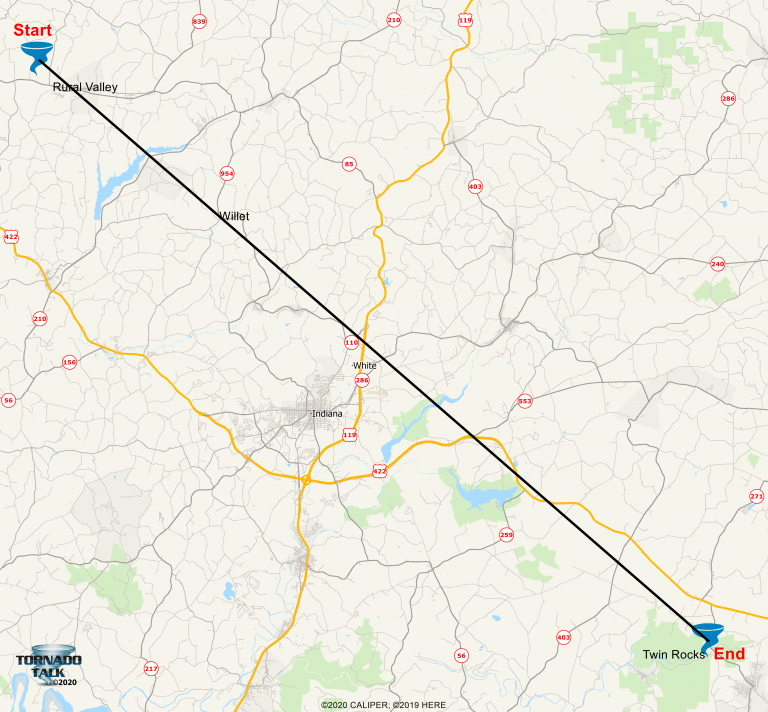 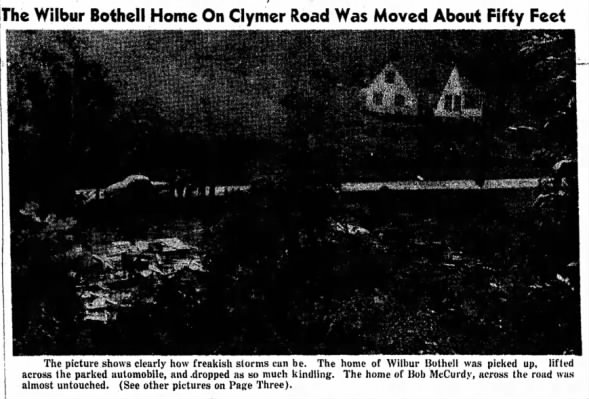 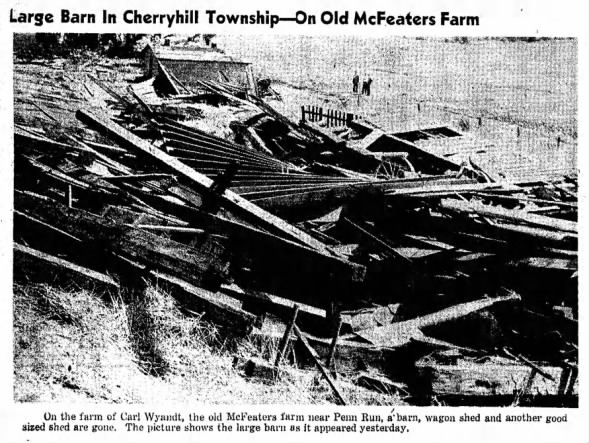 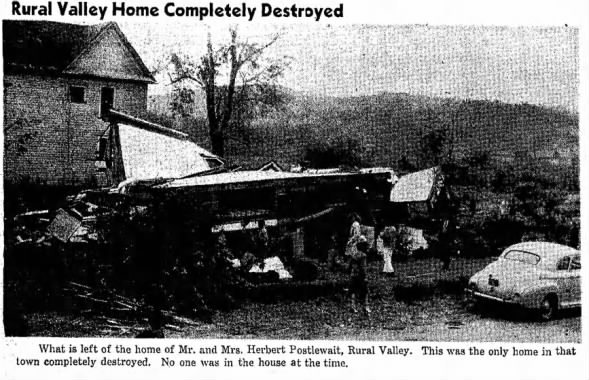 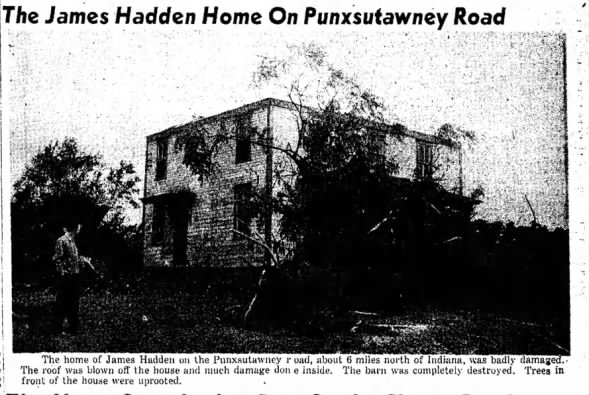 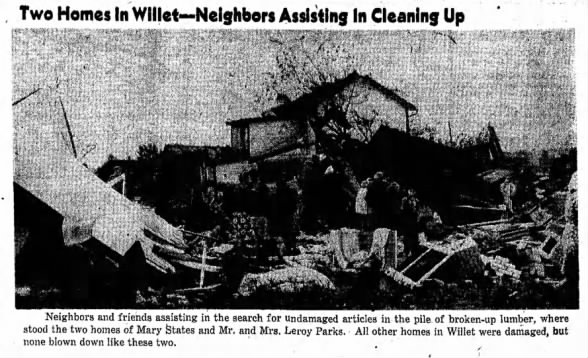 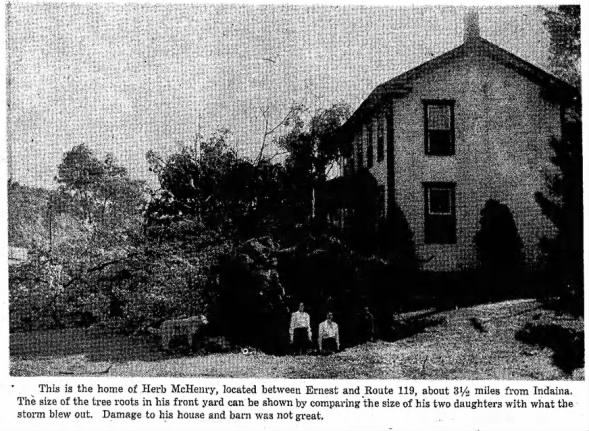 Per Significant Tornadoes:  “Moved Southeast from south of Edinburg, passing east of Yale.  The tornado cut a narrow swath through a dozen farms south of Palmyra, but it was not continuous to Pennsylvania.  Two farm homes were called “destroyed” (near-F3), and eight others were damaged.  Livestock was killed, and barns and outbuildings were destroyed.” 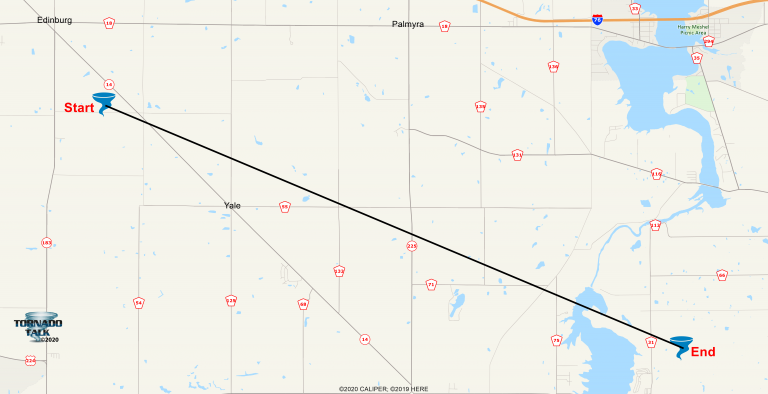 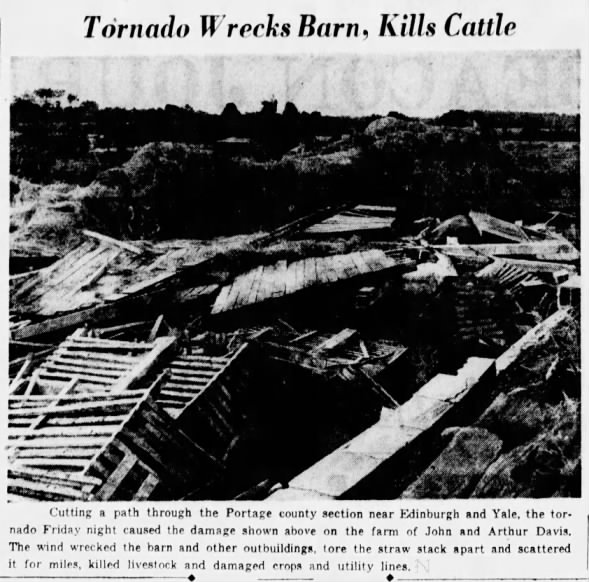 Per Significant Tornadoes:  “What was probably a family of tornadoes moved southeast from Wellsburg, West Virginia, across the southwestern part of Pennsylvania, to the northwest corner of Maryland.  At Wellsburg, 20 homes were unroofed and one girl died from serious injuries on a farm outside of town.  In Pennsylvania, four people died in Washington County; two in Independence Township, and two more north of Claysville.  A near tragedy was averted a few miles further southwest when a summer YMCA camp was leveled.  The children had been led from the dining hall and told to lie flat on the ground in the shelter of a knoll.  A letter written by one of the children was carried 100 miles.

In Greene County, the tornado intensified and leveled many of the homes it encountered in the next 15 miles, killing 22 people.  Three died as the Castile community was destroyed, 10 died as 53 small homes were destroyed at the coal mining community of Chartiers, one mile south of Clarksville, and eight were killed at Dry Tavern, three miles further to the southeast.  In Fayette County, the funnel passed eight miles southwest of Uniontown, near Smithville, injuring at least 21 people.  It probably dissipated and re-formed, or moved across and perpendicular to the Appalachian mountain ridges. About 86 homes were destroyed in Pennsylvania.  Observers at Uniontown reported that debris fell from the sky 35 minutes before the tornado arrived.

Per a Weather Bureau summary entitled, “Tornadoes of June 23, 1944 in Maryland, Eastern Ohio, Western Pennsylvania and Northern West Virginia”: At Chartiers, the tornado threw vehicles up to 200 yards away, some were wrapped around debarked trees.  In Smithfield, several homes and farms were completely destroyed.

From the same article, at Deer Park, “Several observers slated that the funnel clouds were often completely detached from the cumulus clouds and would disintegrate as they progressed forward, disappearing on the ground and reappearing farther along the path.  Funnel clouds had the appearance of an elephant’s trunk that tended to dip to the ground at intervals.”  This is an indication that the tornado was a multiple vortex tornado.

As of the time of writing, this is the deadliest tornado in the State of Pennsylvania, with 26 fatalities. 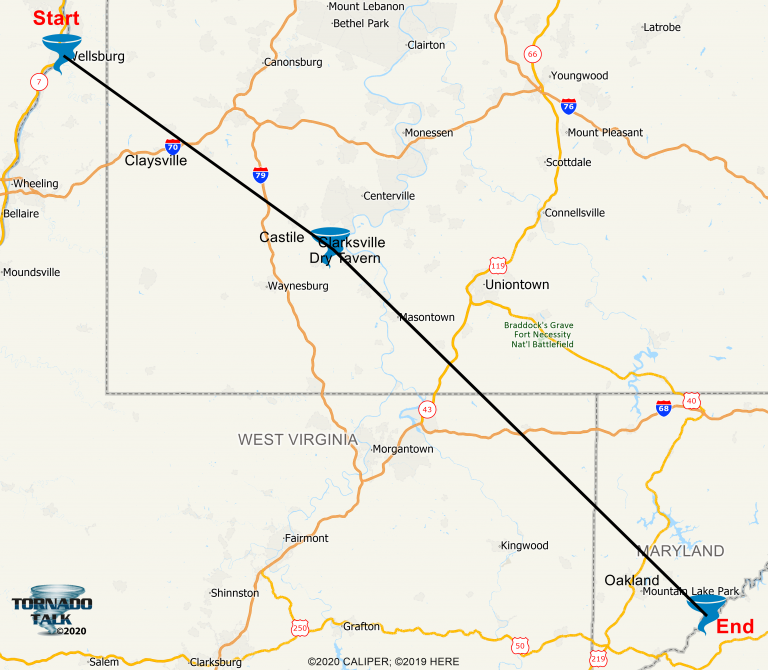 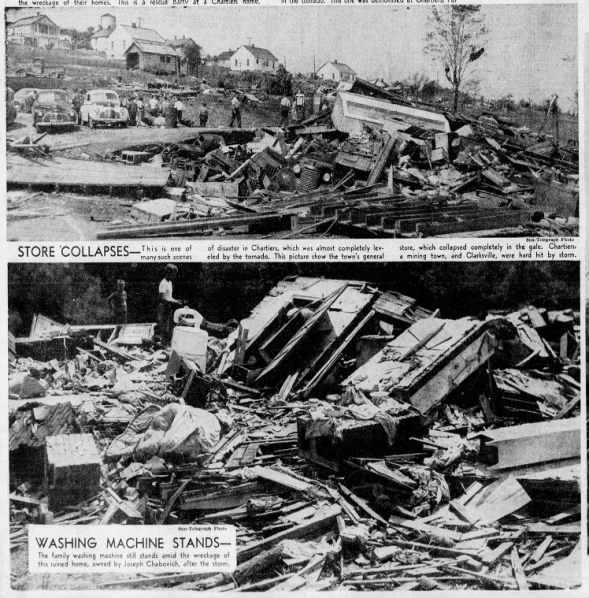 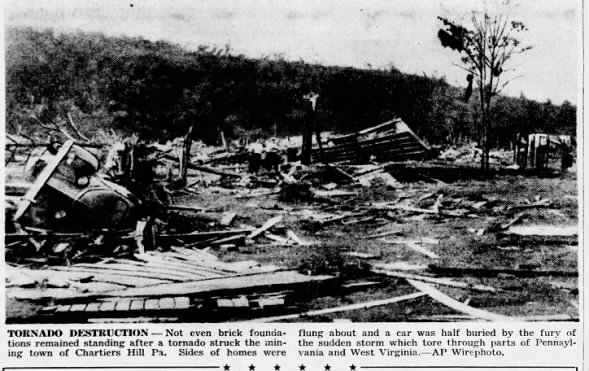 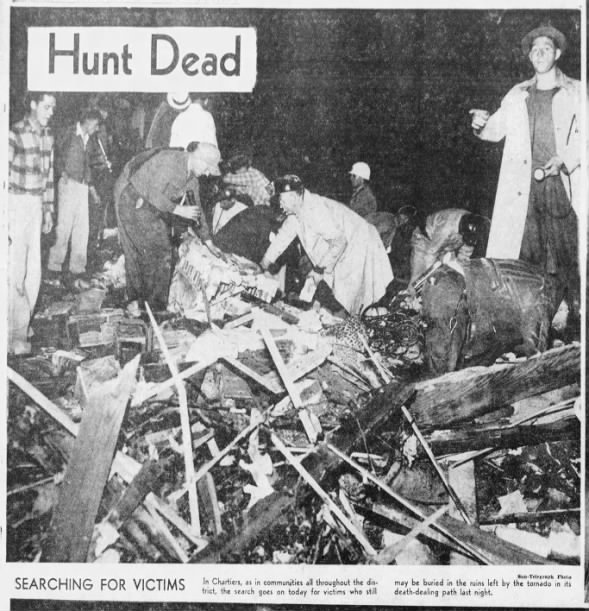 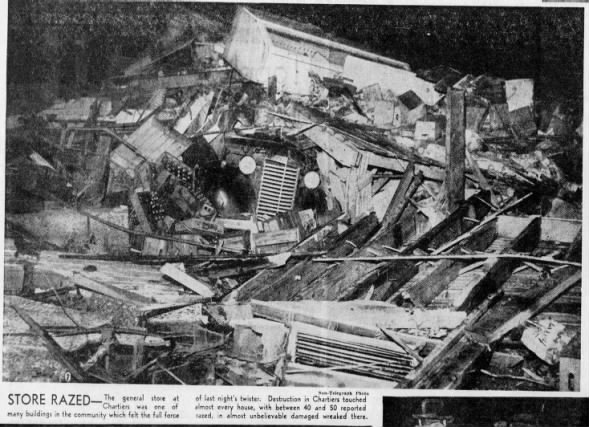 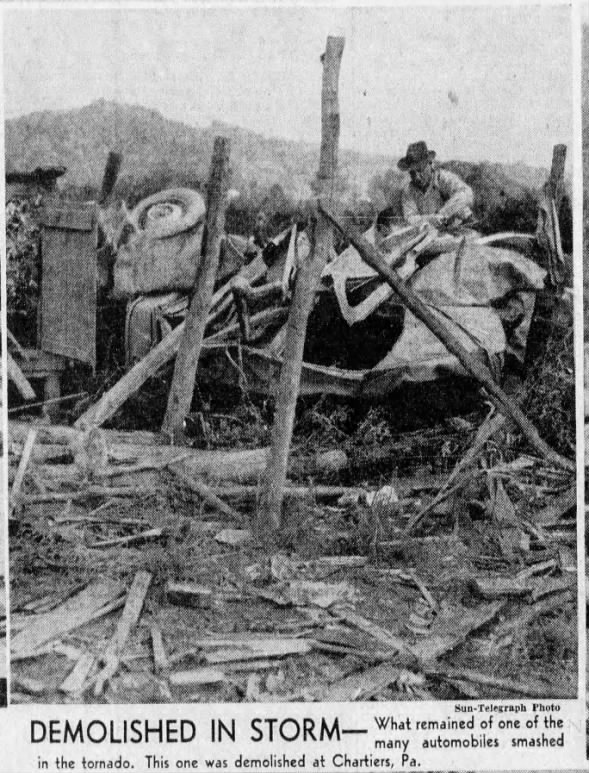 Per Significant Tornadoes:  “Moved southeast from 8 miles south of Pittsburgh, to the northwest of Somerset.  All deaths and all but a dozen injuries took place in the south of McKeesport, Allegheny County, in the communities of Dravosburg, Port Vue, Versailles, Boston, and Greenock. About 88 homes were destroyed in this area, and 306 were damaged.  Over 400 other buildings were damaged or destroyed.  The tornado struck a densely populated area of multi-story dwellings, which mostly collapsed or were blown apart.  A few single-story homes were leveled.  Lesser damage occurred as the tornado moved southeast, parallel to the Pennsylvania Turnpike.  Six homes were destroyed near Donegal, and two were destroyed northwest of Somerset.”

Additional details from the NWS State College Tornado Database:  “The tornado followed Route 31 from Donegal through Bakerstown before lifting near Somerset.  In this area, several homes were unroofed, with at least two more being leveled, and numerous barns and orchards destroyed.  A large section of Koosier State Park near Bakersville was leveled with the large trees and cabins being flattened.”

The Monthly Weather Review reported that in McKeesport, 110 houses were leveled.  Two 355-foot transmitter towers for WCAE Radio Station were toppled.  Many workers were injured when sections of the roof blew off the steel mills at McKeesport.

As of the time of writing this summary, this is the second deadliest tornado in the State of Pennsylvania. 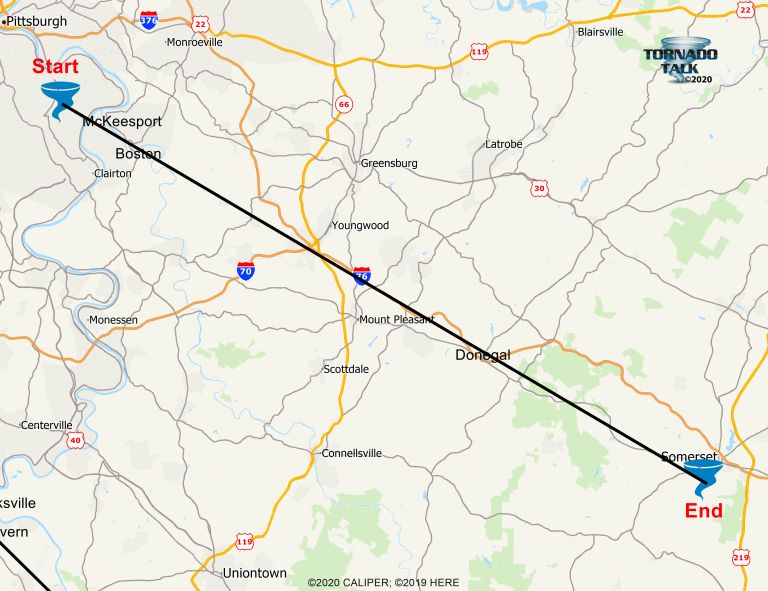 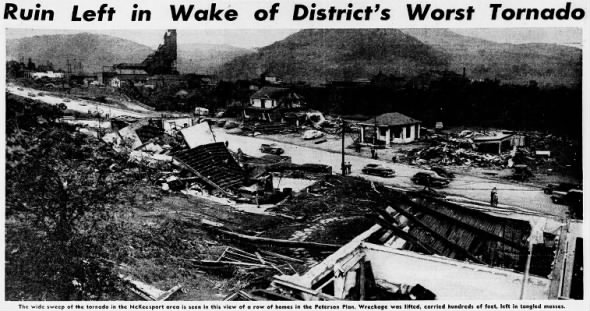 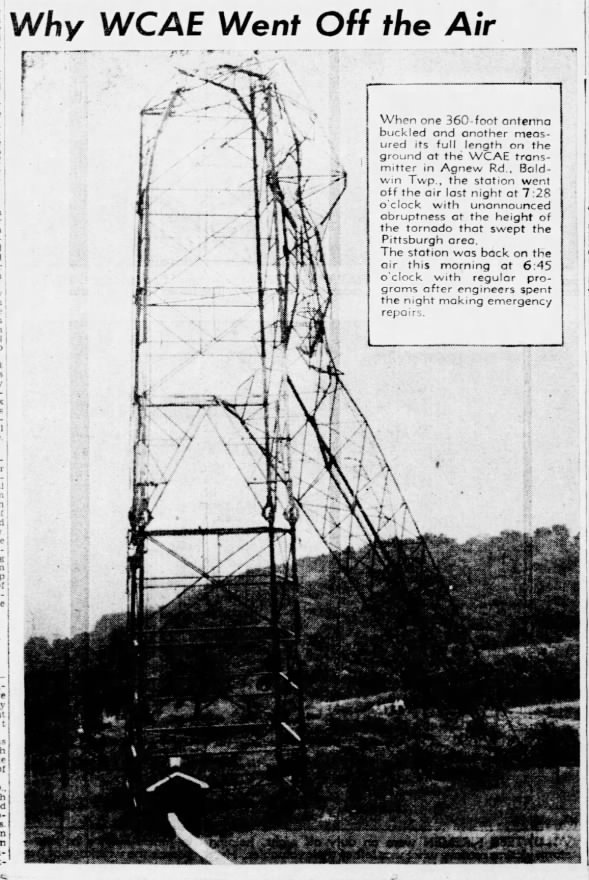 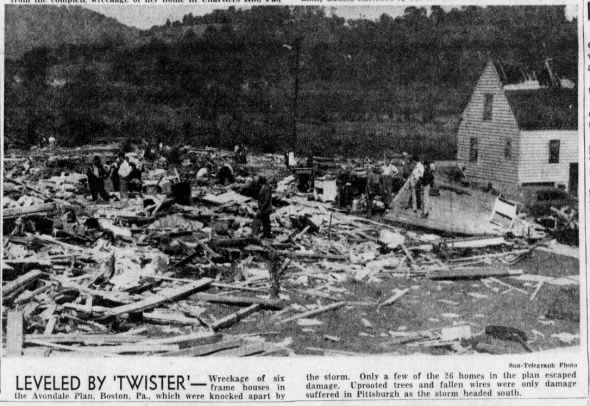 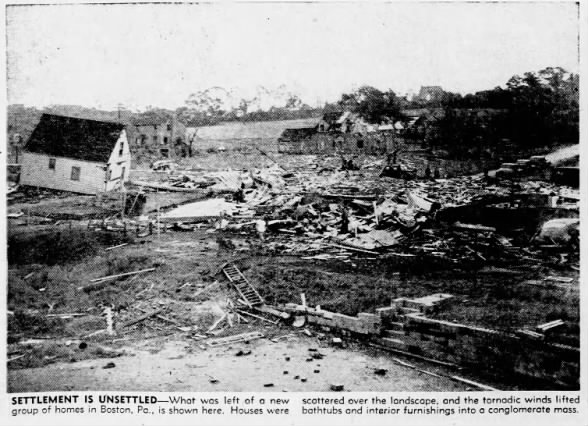 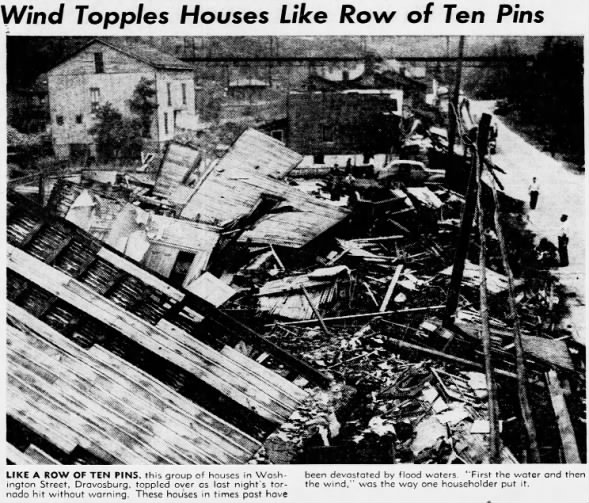 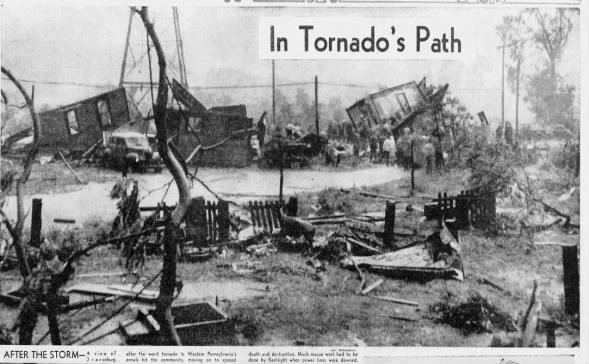 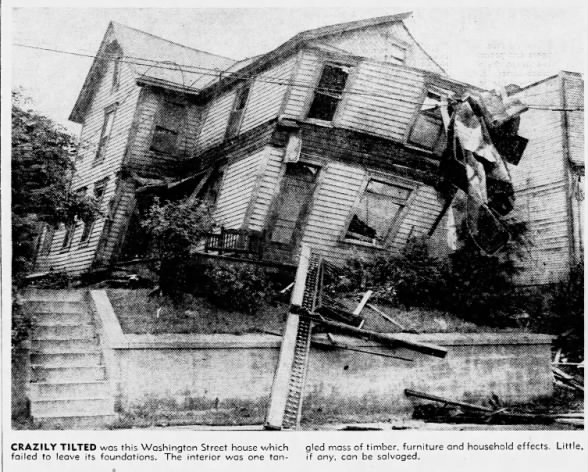 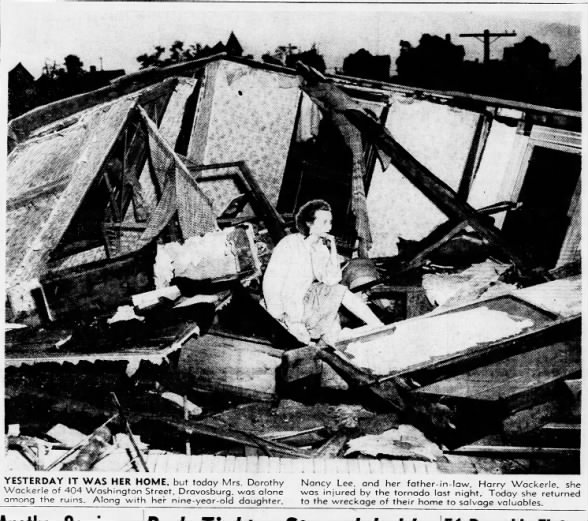 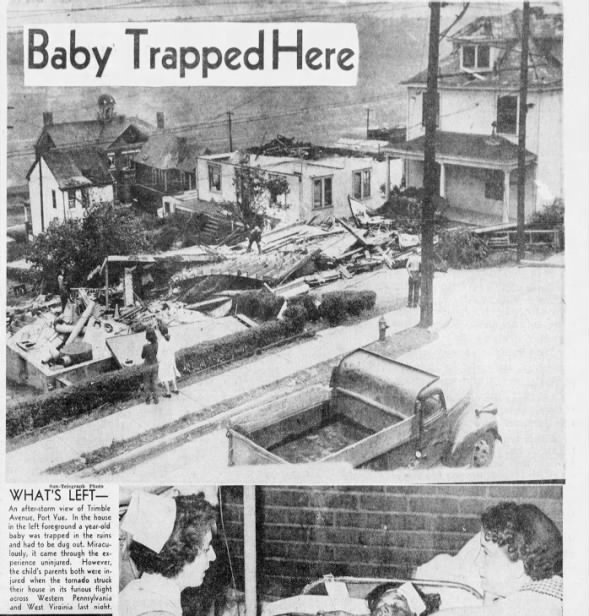 The most devastating tornado of the outbreak was the Shinnston, WV tornado.  It set many records.  It is only the second tornado rated F4 in WV, the other one was the Wellsburg-Oakland Tornado which was discussed above.

It had a 65-mile path length, as it ravaged a section of WV that is not prone to tornadoes, let alone long-tracked and violent tornadoes.

Check out our detailed summary of this tornado by clicking here.

Per Significant Tornadoes:  “Moved southeast through Thomas, with about 50 homes damaged or destroyed”

The Cumberland Times reported that 25 homes in Thomas were destroyed with some flattened or swept away and 25 others were damaged.  A railroad station was heavily damaged.  On Bunker Hill, a farm was hit, with chickens “strewn everywhere” some even had their heads torn off.

In the book “Shinnston Tornado.  Illustrated Eyewitness Accounts of Nature on the War-Path” by John L. Finlayson, an eyewitness to the Thomas tornado is interviewed.  He was the postmaster of the small town, Mr. D.C. Stemple.  He notes, “A total of about fifty families were driven from their homes in tis section.  Two person were killed instantly, and one died a few days later from injuries sustained when a chimney fell upon him.”

He described some of the damage.  He stated that a chimney top, weighing about 500 pounds was carried approximately 150 feet.  “It landed just about twenty feet away from where my family and I were during the storm.

He noted that two army camps were hit in this area.  The first was about 1/2 mile outside of Thomas.  “Army trucks and vehicles of all kinds were scattered in every direction.  Every tent in the camp was blown down, and army equipment of all kinds was strewn in wild disarray.”  The other camp was near the Davis area.

“This image shows some of the devastation from the tornado that struck the Tucker County town of Thomas on June 23, 1944 (photo courtesy of the West Virginia State Archives)” via Goldenseal Facebook Page

Per Significant Tornadoes:  “What was probably a family of tornadoes moved southeast, destroying a gas station, two large barns, three warehouses, 13 homes and killing two people near the start of the path at Cambridge.  Losses in this area were $1,000,000.  In Delaware, the eight-mile-long path produced only F1 damage.  Windows, chimneys, and fences were broken northwest of Delmar.”

Additional details from the Daily Times in Salisbury:  Several blocks of homes were “flattened” and 50-75 buildings were seriously damaged in the eastern end of Cambridge.  The new brick, F.D Sinclair Colored High School was “cut in half”.  A row of homes on Charles Street was “reduced to kindling”. A two-story lodge hall was “beaten to the ground”. About 5-6 miles east of Cambridge near the Linkwood area, barns were destroyed, five houses were unroofed, a gas station was leveled and trees were toppled over.

The name “F.D Sinclair Colored High School” is used in the above summary. That is what is reported in the newspapers, as this took place during the time of segregation in the Southern United States. 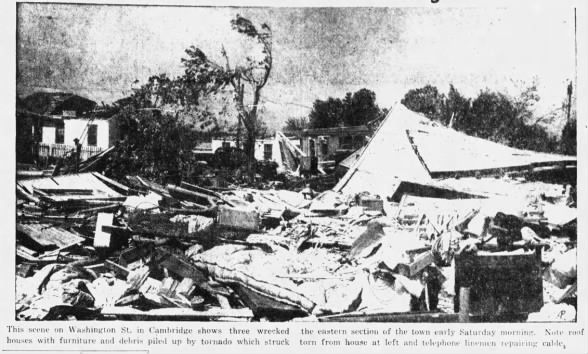