This summary looks at the devastating La Plata, MD tornado of April 28, 2002.  This was a significant event for several reasons and it is not without its discrepancies and controversy.

None were as close to the coast.  The tornado tracked across the Chesapeake Bay almost to the Atlantic Ocean.

This was not the only tornado to hit La Plata nor was it the deadliest.  On November 9, 1926, a tornado killed 17 in Charles and Prince Georges Counties.  Most of the deaths (14) occurred at a small school outside of La Plata.  This tornado was given a rating of F3 by Thomas Grazulis in Significant Tornadoes.

There is a major discrepancy on the path of this tornado. The official SPC stats show 3 separate tornadoes (see Map 1):

However, the NWS Service Assessment says these were actually the same tornado with a 64-mile path.  Tim Marshall’s survey denotes a 70-mile path through Charles, Calvert, Dorchester, and Wicomico Counites.  When you recreate the path based on the NWS Sterling Summary’s map you actually get a 78-mile path. (see Map 2 & 3)

There is photographic and video evidence of the tornado crossing the Chesapeake Bay.  The NOAA Service Assessment stated that the tornado moved out onto the Chesapeake Bay just north of the Calvert Cliffs Nuclear Power Plant.  A waterspout accompanied it for a few miles on the bay.  The primary tornado continued across Dorchester County again and intensified to F3 before dissipating as it approached Salisbury, MD.

Plot of the SPC Coordinates for the 3 tornadoes they list in the database.  Other sources combine these paths into one. 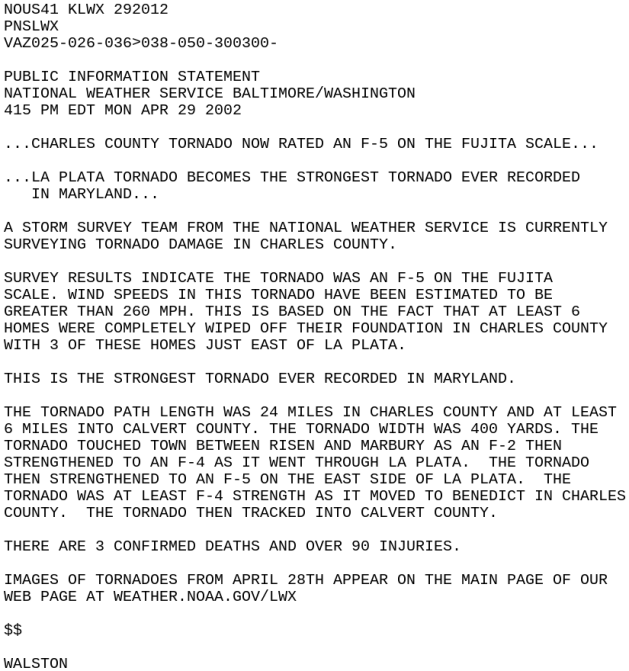 The NWS then wanted the damage studied even further by experts to see if the F5 damage was warranted.

According to Tim Marshall in his abstract of the survey, “The survey team found that most destroyed homes had been constructed poorly with minimal attachment to their foundations.  We estimated that homes simply slid off their foundations at wind speeds estimated to be as low as 45 m/s (100 m.p.h).”

Marshall’s survey found that F4 damage occurred to only two, two-story homes in Downtown La Plata that were collapsed to their foundations.

The survey found that that it was needed to study the surroundings to homes to determine an appropriate rating.  They noted minimal tree damage along with an undamaged mailbox, sheds and flagpoles, as well as only minor roof damage to some of the “slider homes” that they found.  These “slider homes” were rated F1 to F3 depending on the severity of the surrounding damage.  F4 damage was only a small area of the 64-mile path. 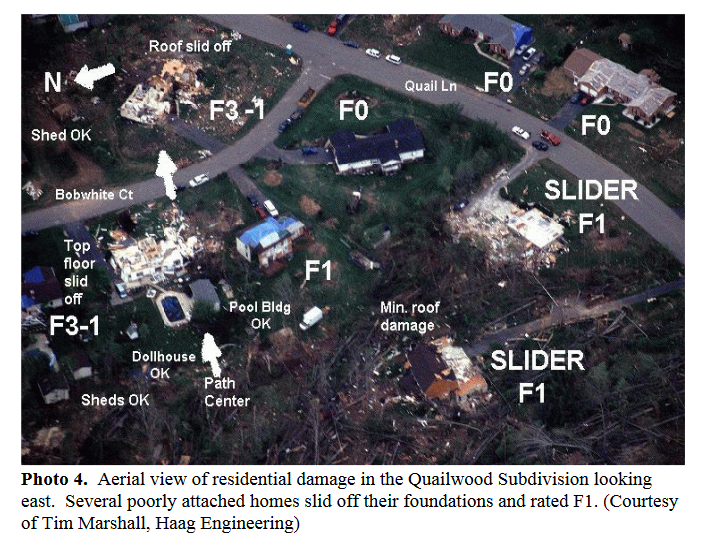 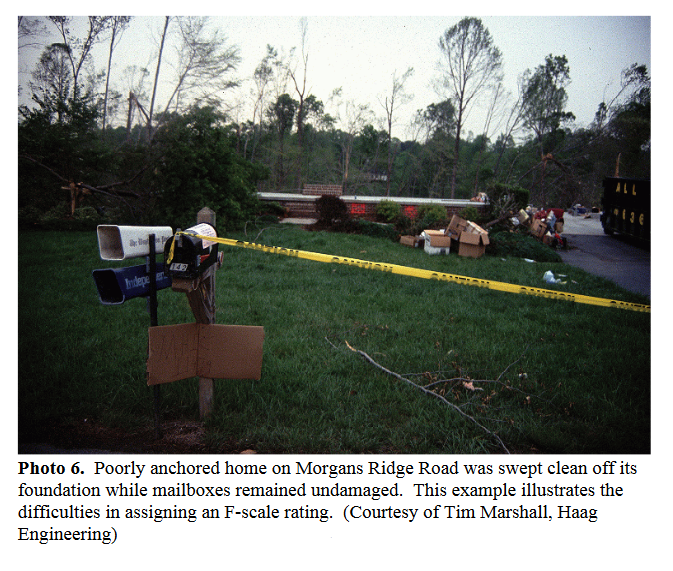 The tornado had one of the longest path lengths on record for the area.  The F4 damage was determined independently of the record path length.

Team Members agreed that the tornado damage was not as intense as observed with F5 tornadoes at Plainfield, IL, Jarrell, TX, Bridge Creek, OK, or Andover KS.

Houses that slid off their foundations were not adequately attached and failed at low wind speeds.  Some failures were a result of building code violations

The NWS WFO Baltimore/Washington first rated the tornado an F4 but later raised to the assessment of F5 based on building damage just east of downtown La Plata.

This was disseminated to the public and media through Public Information Statements and a news story created by the NWS Public Affairs Offices without a “preliminary indicator.”

Subsequent updates to the news story did contain the word “preliminary”

The assessment team concluded that the Baltimore/Washington WFO was unsure if a service assessment would be undertaken.

The assessment team questioned whether “preliminary” was a strong enough word to allow for any subsequent change to the rating.

Baltimore/Washington WFO personnel rated the worst damage F5. This preliminary F5 rating to a brick building in downtown La Plata was lowered to F4 after the assessment team determined some of the damage was due to flying debris from a lumber company upwind.

The Assessment recommended the following:

Information on the damage path from Storm Data, the NOAA Assessment of the event and the 10 Year Anniversary Summary from the NWS Baltimore/Washington.

This tornado developed at 6:56pm south of Marbury, MD in Western Charles County.  This was also about 2 miles east of the Potomoc River.  It moved to the Southeast causing F1 damage near Pisgah.  SW of Ripley, a home was unroofed.  Estimated winds here at 113 mph.

East of Quailwood, the tornado hit the Archbishop Neal School.  Heavy cement slabs that formed the roof lifted and fell into the classrooms.  The windows were broken and some of the walls were torn away.

The tornado continued to strengthen as it moved through Downtown La Plata.  Eyewitness accounts indicated a second weaker tornado formed a quarter of a mile south of the first twister.  Both tornadoes moved into Downtown La Plata between 7:02pm and 7:07pm causing widespread damage.  Swaths of F3 and F4 damage were observed through town.  The width at this point was calculated at 1/2 mile.

Along Route 6 near Route 301, cars were thrown and turned over.  Only a few walls were left standing at Posies Market.  The 125-foot city water tower was blown over.  There was F3 damage to a lumber yard on Saint Marys Avenue.  F4 damage was noted just east of the lumber yard.

The second tornado dissipated as the main toward continued to head ESE through the remaining parts of Charles County.  After leaving La Plata, a heavily wooded area sustained extensive damage and more homes were leveled.  A 51-year-old man was killed and his wife critically injured when their house under construction on Hawkins Gate Road about 5 miles east of La Plata, collapsed.

In one of the homes near Normandie and Route 6, seven people were inside and survived.  3 were in the basement, 2 were on the first floor headed to the basement and were were on the second floor.

At 7:28pm, the tornado moved into Calvert County south of the Patuxent River Bridge (Route 231).  Over half of the homes in the Patuxent View development were damaged.  A home with no foundation or anchoring east of this area off Hallowing Point Road was picked up and thrown 80 feet into a culvert.  And elderly couple were killed in this home.  Most of the damage in Calvert County was estimated in the F1/F2 range.  125 homes were damaged and 10 destroyed mainly in the Brownsville and Hallowing Point areas.

The tornado then moved onto the Chesapeake Bay just north of the Calvert Cliffs Nuclear Power Plant.  A secondary waterspout formed for a few miles on the Bay.  Before entering the Bay, there was evidence of damage along the shoreline and parts of trees were thrown in the Bay.

After crossing the Chesapeake Bay, the main tornado pushed into Dorchester County just south of Taylor’s Island.  One house and several outbuildings were destroyed near Hip Roof Road.

Per Storm Data, “Debris such as cancelled checks, bank and tax documents and teller receipts from La Plata was found in southern Delaware, over 60 miles away.”

There were 3 direct fatalities attributed to the tornado.  2 indirect deaths were also reported.

Per the NWS Summary:  The damage path exited Calvert County and entered the Chesapeake Bay. The pictures below show damage to a swath of trees along the shoreline. Parts of trees were thrown into the Chesapeake Bay by the tornado. 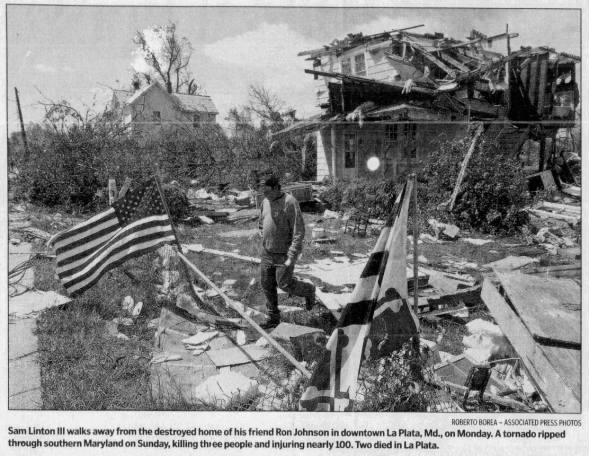 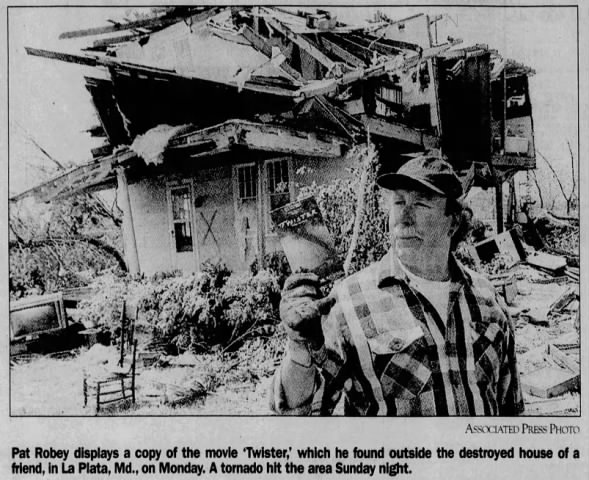 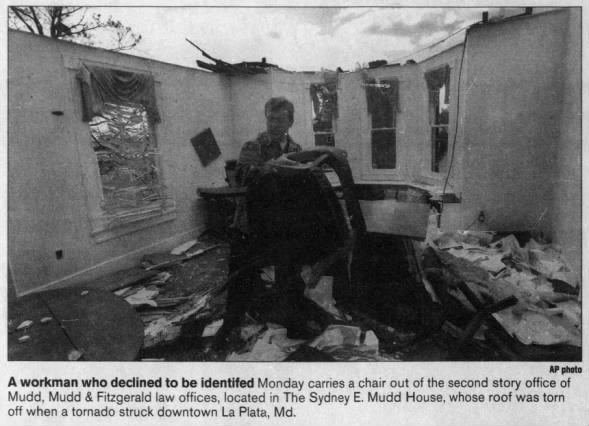 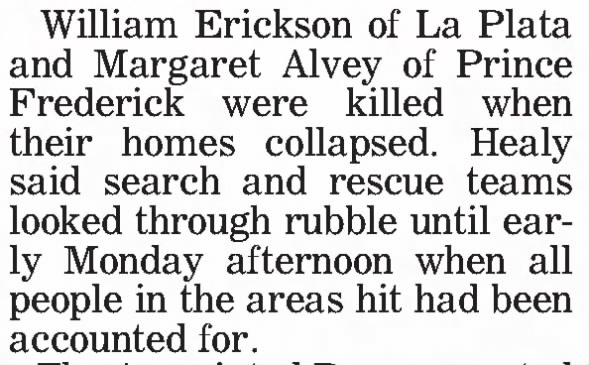 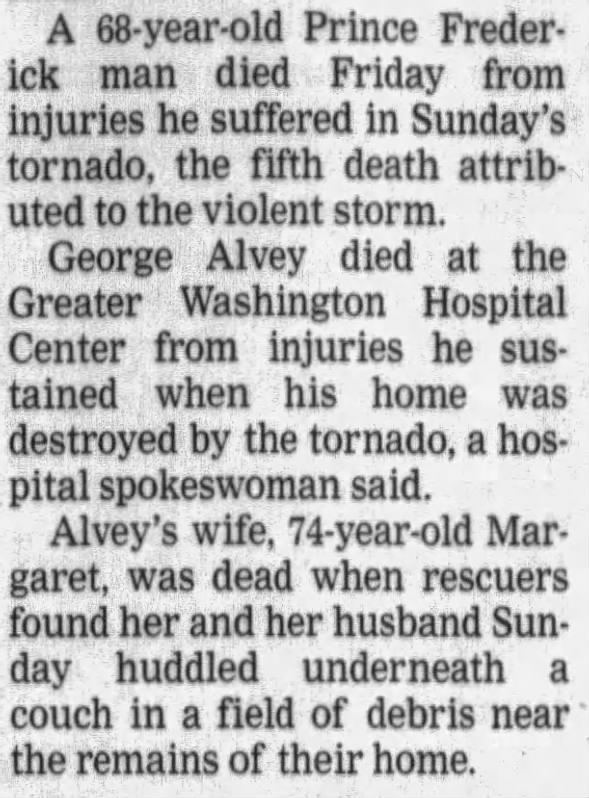 The La Plata, MD Tornado:  Issues Regarding the F-Scale by Tim Marshall