This is the free version of our Lookeba summary. The premium version of this article contains more exclusive imagery, which can be viewed here. You can access this and all premium summaries by becoming a Tornado Talk Member! Join now here.

**UNLESS AVAILABLE/SOURCED FROM A GOVERNMENT WEBSITE OR GIVEN OUR EXPLICIT PERMISSION, NO IMAGES OR OTHER MEDIA FROM THIS SUMMARY ARE TO BE REDISTRIBUTED IN ANY WAY. SOME OF THIS MATERIAL WE HAVE OBTAINED UNDER VERY SPECIFIC PERMISSIONS TO FEATURE. WE WILL TAKE ACTION IF ANY REPOSTINGS OR REDISTRIBUTIONS ARE FOUND OF THE FOLLOWING SUMMARY CONTENT.**

During the afternoon of May 24, 2011, Oklahoma was impacted by one of the state’s most infamous outbreaks. Twenty-two tornadoes tracked across areas west of and into the Oklahoma City metro. This summary will examine a short-lived and powerful EF3 that tore through areas west and north of Lookeba.

Note: This work would not be possible without the aid of Rick Smith, who dug up and provided for our use all of the damage photos and aerials seen in this summary. Jana Houser also provided us with the RaXPol imagery included in this summary and exclusive permission to feature that content. Thank you both for your critical contributions!

At 3:31 PM CDT, a supercell spawned a weak tornado one mile southeast of Sickles. Not much is known about the first portion of the track due to a lack of ground photos. Based on Google Earth imagery from August of 2012, the first observable area of damage was in several groves of trees on the south side of County Road 1140. There, numerous large branches and limbs were removed, with a few trunks being completely uprooted. Two homes near the intersection of 1140 and N2570 Road were affected, each sustaining minor damage to their roofs. As the tornado continued northeastward, a swath of snapped trees was observed in a wooded area west of County Street 2580. The video below from the timestamps 0:00-1:00 shows some of the development of this multi-vortex twister.

Two residences were enveloped by the circulation at the intersection of County Street 2580 and E1130 Road. Dean Farrow and his wife Cari lived in one of these houses. Dean was not home when the tornado struck, but his wife was and she took refuge in a storm shelter with their two dogs. In an interview with The Oklahoman, Cari said, “I could hear that thing spinning. I can’t believe all that stuff was happening on top of me. When I stepped out, I just lost it.” Thankfully, she survived unharmed, though the residence was a complete loss. The brick house was almost entirely destroyed, leaving a couple interior walls surrounded by debris. A large garage was completely swept away and a few trees sustained minor debarking. Dean’s pickup truck was ripped to shreds, with the engine torn out and the chassis thrown. Their neighbor, Gail Warren, had significant damage to her 100-year-old house. The roof was fully ripped off, and several walls collapsed. A garage behind the residence was also leveled. The video below shows the development of the twister from inception up to striking the homes. 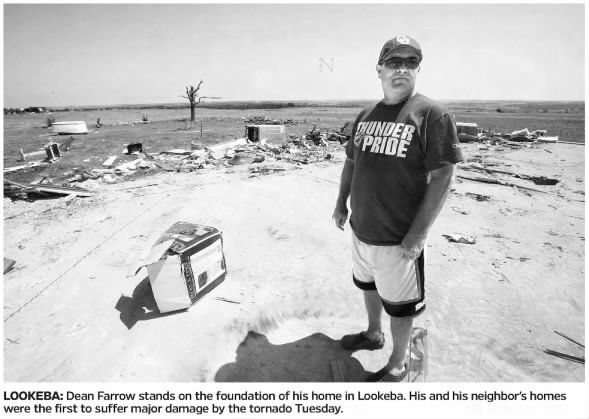 In a field along E1130 Road northeast of the two houses, aerial images showed a number of large trees that were mangled, stripped of all their branches, and in several cases, partially debarked. A trailer home farther along E1130 was pulled from its site and obliterated around 30 yards from its original location. The video included below shows the tornado rampaging through this area. The destruction of the trailer is visible at bottom center from the 1:41-1:46 timestamps.

The tornado crossed US Route 281 at a width of 1,600 yards (0.91 miles). A home overlooking the highway had much of its sheet metal roof removed, and another structure on the property was destroyed. Several large trees were torn apart here. Across the road, a manufactured residence lost several pieces of its roof. A trailer was tossed up an embankment. To the northeast, several groves of trees were shredded with all branches removed.

Most tornado enthusiasts have seen the “octopus tornado” clip. It is by far the most infamous video of this tornado, and one of the most iconic of the 2010s. The filmers traveled south on Route 281, nearly losing their lives due to a misjudgement of how quickly the twister would reach the road. You can see the “octopus” part of the video from timestamps 4:30-5:20.

Vegetation damage continued as the tornado approached E1120 Road, where another farmstead was struck. Aerial images showed a house with the roof removed and multiple walls collapsed. Further down the road, a manufactured home had much of its top ripped off. A heavy steel tank from an oil battery was mangled, torn open, and found about 530 yards from its original location.

The tornado remained over open fields as it began to narrow, eventually encountering a grove of trees. Here, a 600-yard-long swath of vegetation was downed. The last discernable area of damage was somewhat further east along County Street 2620, where a property was hit, ripping the metal facade off of a barn. Shortly after, the tornado dissipated in a wooded area.

In all, the tornado traveled just shy of 8.69 miles during its fifteen-minute trek, reaching a peak width of 1,670 yards (0.93 miles). There were no injuries or fatalities. The storm that spawned the Lookeba EF3 would quickly cycle and produce the extremely violent Calumet-El Reno-Piedmont-Guthrie EF5.

We gathered information for this event from the SPC and NCDC Databases, the May 2011 Storm Data Publication, the NWS Norman Event Page, and analysis of ground level, aerial, and satellite imagery and found the following differences: