The Louisville, MS EF4 tornado was a part of a larger outbreak that spanned from April 27-30, 2014.  84 tornadoes occurred during that period with over half of them on April 28.  There were 2-EF4 tornadoes during the outbreak and we look at one of those in this summary.

A tornado developed in NE Leake County, MS causing tree damage.  It strengthened as it approached the 4 corners of Leake, Attala, Neshoba and Winston Counties.  The tornado traveled over 25 miles in Winston county angling north toward the town of Louisville.   EF4 damage was found mainly in Winston County, first in rural areas in the SW part of the county and then near Louisville.  Estimated maximum wind speed of 185 mph.

Details from the NWS Summary

This tornado first touched down in northeastern Leake County, where the damage was mostly downed trees. As the tornado approached the 4 corners intersection of Leake, Attala, Neshoba, and Winston Counties, it strengthened and began to impact structures.

Several mobile homes, metal buildings and single family homes were damaged or destroyed in this area along Highway 25. The tornado continued northeast impacting rural areas of southwest Winston County. There it intensified and began to produce EF3 and some areas of EF4 damage. Numerous homes were destroyed, trees were debarked and severe damage occurred to several chicken farms. The EF4 damage in this area was a building reduced to a slab and a chicken farm that was completely wiped away.

At this point, the tornado made a turn to a more northerly course and continued to cause EF2 and EF3 damage just south of Louisville. The tornado entered the city of Louisville on the south side along Highway 15 and continued north-northeast through the east side of the city. Widespread EF3 and EF4 damage occurred in this area. Of particular note, several industrial buildings were destroyed and an area of homes and apartments was destroyed, a few of them being completely taken down to the slab.

The tornado continued through the east side of Louisville causing mainly EF3 damage. Of particular note, the Winston Medical Center received heavy damage and became incapable of use. The tornado continued moving north-northeast roughly along McCullough Road causing EF3 and EF4 damage. Numerous homes had their roofs and walls removed and some were reduced to slabs. Near the intersection with Louisville-Brooksville Road, two particularly well built homes were very heavily damaged and received EF4 ratings.

From this point, the tornado began to weaken, causing mainly EF2 and EF3 damage along North Columbus Avenue. As it approached a second intersection with Highway 25, the tornado lifted after traveling on the ground for over 34 miles.

Map discrepancy:  The official coordinates from the SPC track the tornado across the northern parts of Louisville  The event summary from the NWS Jackson describes a track into the southern and eastern parts of the town and their track map shows that as well.  I have attached that map for comparison.

Images from the NWS Jackson, MS

BREAKING: Large wedge tornado on the ground near Louisville, Mississippi. via @weatherchannel pic.twitter.com/D2H5UY2E4b

RT @wxprof: This door landed on the MSU campus from the Louisville, MS tornado. 30 miles to the south pic.twitter.com/RJ44g0s0tb

Before and after Louisville, MS tornado pic.twitter.com/7vCGuu7dRi

Picture: Only a slab remains after confirmed EF-4 #tornado in Louisville #MS on Monday via @NWSJacksonMS #mswx pic.twitter.com/yQuhMe1lSO 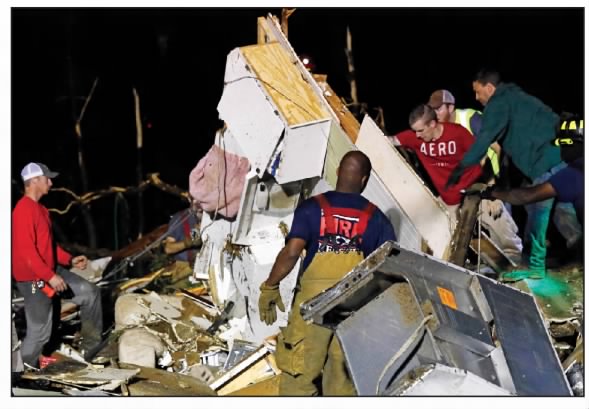 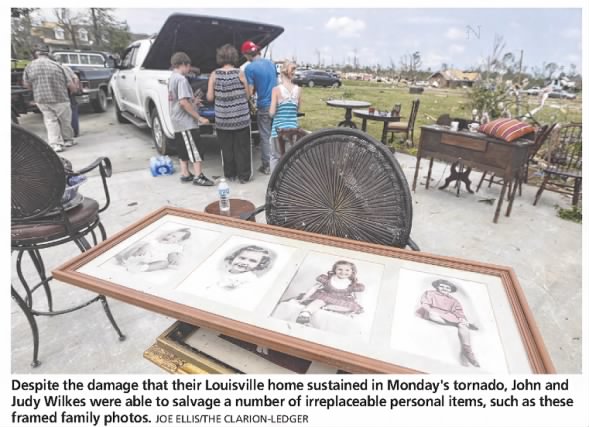 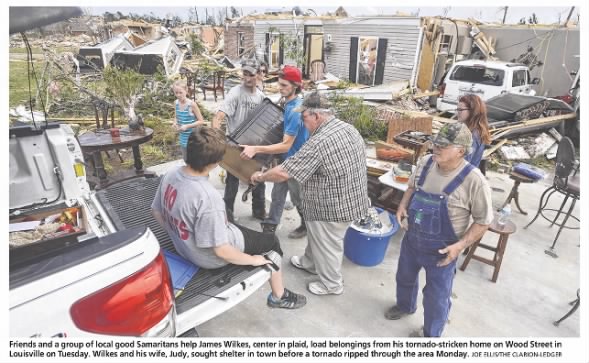 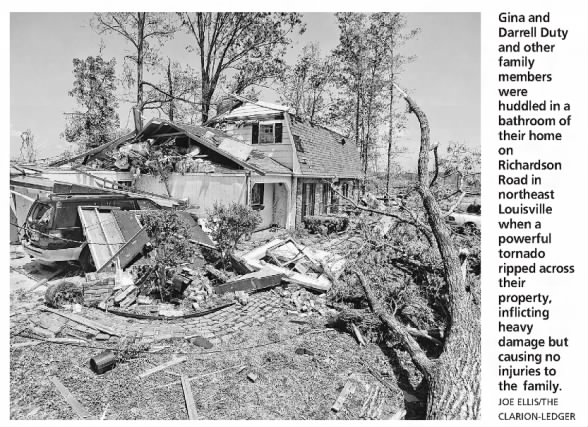