A devastating F5 tornado crossed through parts of Lubbock, TX during the late evening of May 11, 1970.  It was actually the 2nd tornado of two that hit the Lubbock area that evening.  The first tornado moved over the northeast section of the city between 8:10 and 8:45 pm.  The strongest wind occurred as it moved over the U.S. 82 and Parkway Drive interchange.  According to the Lubbock Avalanche Journal, “At this site, 13 beams, weighing 109,000 pounds each — each in place with a concrete dowel and doubly weight with chains — blew from atop the overpass under construction.” (Fujita).

Note:  I only see one entry in The Storm Prediction Center for a tornado in Lubbock County.  That is for the F5.  There was a tornado entry for a tornado tracking 1 mile in Crosby County but that appears to be a separate tornado.

The second, more destructive tornado developed near 19th Street and University Avenue at ~9:35pm CT. It moved 8.4 miles through the heart of downtown.  It lifted near the airport around 10pm CT.  Area of tornado damage covered 15 square miles.  26 people lost their lives.

Per the NWS Lubbock, “Dr. Theodore “Ted” Fujita later determined that all but one of the deaths (96%) occurred along the path of suction spots (also know as suction swaths and suction marks). These suction spots, which create localized areas of increased damage, are created when smaller-scale vortices develop and rotate around the larger parent tornado forming a multiple-vortex tornado. The below map shows where the deaths from the tornado were in proximity to the suction spots.”

The costliest tornado in Texas history developed over the southwest section of Lubbock, dipped to earth just south of the downtown section, skirted just east of the Texas Tech campus, then plowed through the downtown area, crumbling apartment houses and other buildings en route.  The tornado moved northeastward generally along U.S. Highway 87 and stayed on the ground for eight miles before lifting.  It disappeared after wrecking airplanes, hangars, and other buildings at Lubbock Municipal Airport.  Twenty-six person died as a result of the tornado.  At least 500 persons were injured, although the exact number of injuries is not known as it became necessary for hospitals to turn away many of those with minor cuts and bruises.  Total property damage was estimated at $135 million.

Where the tornado first touched ground and moved through the downtown area, the path was one and one-half miles wide, equalling that of the Glazier-Higgins Tornado of April 9, 1947, which was also one and one-half miles wide – the record for a Texas Tornado.  As the vortex travelled northeastward, it narrowed, and was about one-quarter mile wide at the airport.  This was the second tornado to strike the downtown area of a Texas city of considerable size, and occurred on the anniversary date of the Waco tornado, which devastated the heart of that city on May 11, 1953.

At 7:57 p.m. CST a funnel cloud was observed aloft three miles east of the Lubbock city limits on the Buffalo Springs Lake Road.  At 8:14 p.m. CST the Weather Bureau radar indicated a large severe thunderstorms 10 to 15 miles in diameter over the city of Lubbock, and extending about eight miles west of the airport and seven miles east and southeast.  At 8:35 p.m. CST, the huge tornado swooped down at near rooftop level from about 26h Street and the vicinity of 19th and University Avenue and was firmly seated on the ground as it passed into the downtown section and snaked through the Guadalupe area on its way to the airport.  It was on and around Fourth Street that the tornado turned into a killer.  It made shambles of expensive homes near the County Club, uprooted large trees, folded entire buildings in on their contents, destroyed or damaged about 10,000 automobiles and demolished some 119 aircraft at the airport.

The twenty-story Great Plains Life Building, which lost a huge section of brick in addition to extensive window damage; First National Bank-Pioneer Natural Gas Building had both the north and south sides, mostly glass, virtually destroyed, and marble veneer was ripped form the east and west ends;  Lubbock National Bank Building had signs ripped from roof, and suffered some hail damage;  the Citizens National Bank Building and Lubbock County Courthouse suffered mostly wind damage;  and the Lubbock City Hall suffered breakage of large two-story plate glass windows on theist side that resulted in the collapse of some interior walls.

In the downtown area, an estimated 80 percent of all plate glass windows were smashed.  The Lubbock Avalanche-Journal was hit hard by the tornado and its publishing facilities were knocked out.  The Amarillo Globe-News printed both May 12th editions of the Lubbock Paper.  Power plant No. 1 near downtown Lubbock was knocked out for an indefinite period; power plant No. 2 on Municipal Hill was knocked out temporarily.  Total damage to public facilities was estimated at $10 million.  Damage to private automobiles was estimated at $3 million.  Some cars were flattened to within two to three feet of the ground.  A Greyhound Bus was slammed broad-side into a building.

Warehouses and other buildings with broad expanses of unsupported roof were demolished or heavily damaged.  The entire north wall of the Kimbell Fords Co. on North Avenue H fell into Yellohhouse Canyon when the roof caved in.

Every motel along 4th Street and Avenue Q north of 10th Street sustained heavy damage.  Those located on Avenue Q North Drive (the Amarillo Highway) were destroyed, as was the Lubbock City-County Health Department.

The major residential damage began with apartment complexes along the northside of 4th Street near Indiana Avenue which lost roofs.  This spread throughout the Arnett-Benson area, tapering northward to tree limb breakage and roof damage nearer the Clovis Highway.  The worse residential damage occurred in the Guadalupe area, north of 4th Street between Avenues Q and A, and in the Country Club addition west of the Amarillo Highway.  The Mesa Drive area near the Lubbock County Club was reduced to piles of rubble.  House trailers throughout the norther portion of the city were easy victims of the tornado.

Except for some Jones Stadium light towers, the Texas Tech campus escaped significant wind damage.  Three light standards were bent and another was destroyed.

At the Lubbock Municipal Airport, the edge of the tornado funnel was believed to have passed approximately three quarts of a mile south of the Weather Bureau Office.  A peak gust of 77 knots (89 miles per hour) was observed on the Weather Bureau Anemometer.  About 100 private airplanes were piled like wastepaper inside and outside sheet metal hangers.  In addition, 19 of 23 small military aircraft were damaged beyond repair.

1. The tornado was used as inspiration and justification for the establishment of the Wind Science and Engineering (WISE) Research Center at Texas Tech University. WISE has developed voluminous information on windstorm mitigation and other wind-related subjects that are available to professionals and public alike. The WISE center has brought many professionals, much money, and tremendous recognition to the South Plains.

2. The tornado also helped in the selection of Lubbock as one of the very first NWS offices to receive a WSR-74C radar. The Lubbock WSR-74C radar became operational in 1978.

3. The study of the meteorological data from May 11, 1970, in combination with an extensive damage survey completed in Lubbock of the aftermath, helped, in part, in the development of the Fujita Tornado Damage Scale (F-scale) by Tetsuya Theodore (Ted) Fujita. The F-scale is the de facto standard used to rank tornadoes by the amount of damage that they inflict.

4. The study of the damage patterns, especially from overhead with aerial photos, allowed Dr. Fujita to further develop his theory that some tornadoes contained more than one vortex (i.e., there were multiple vortex tornadoes). 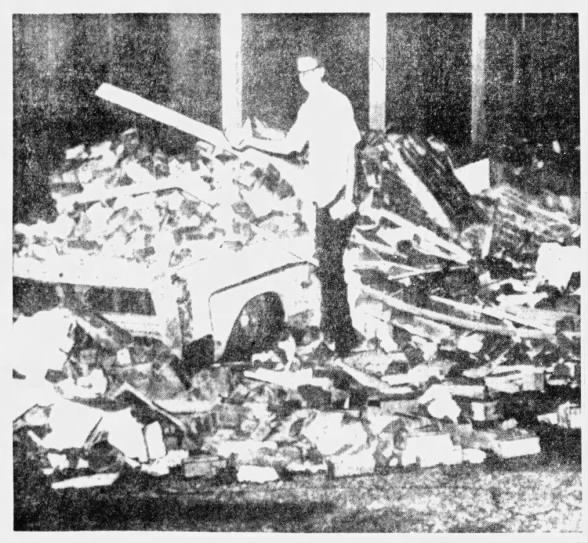 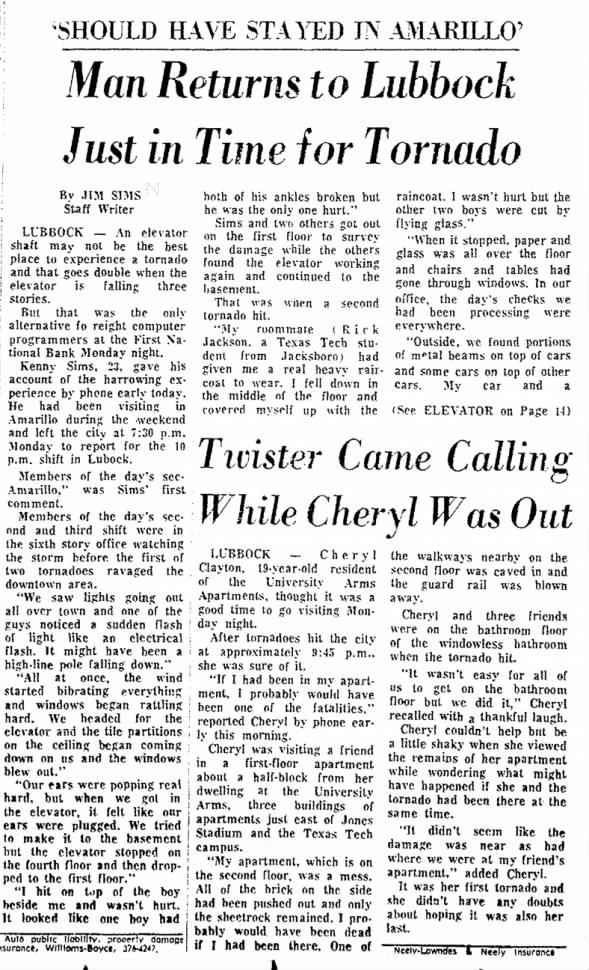 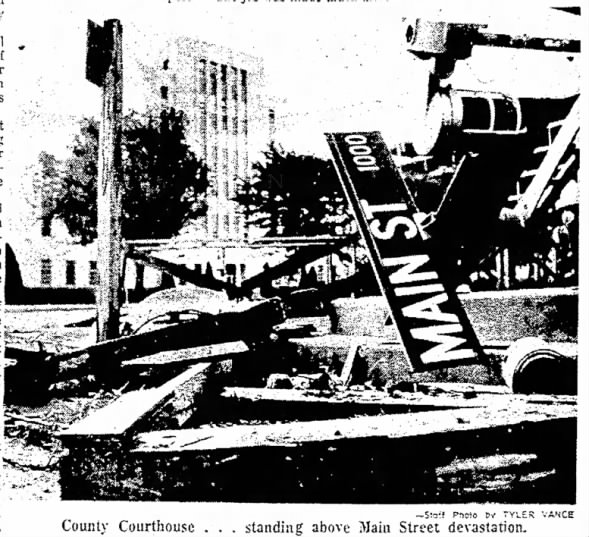 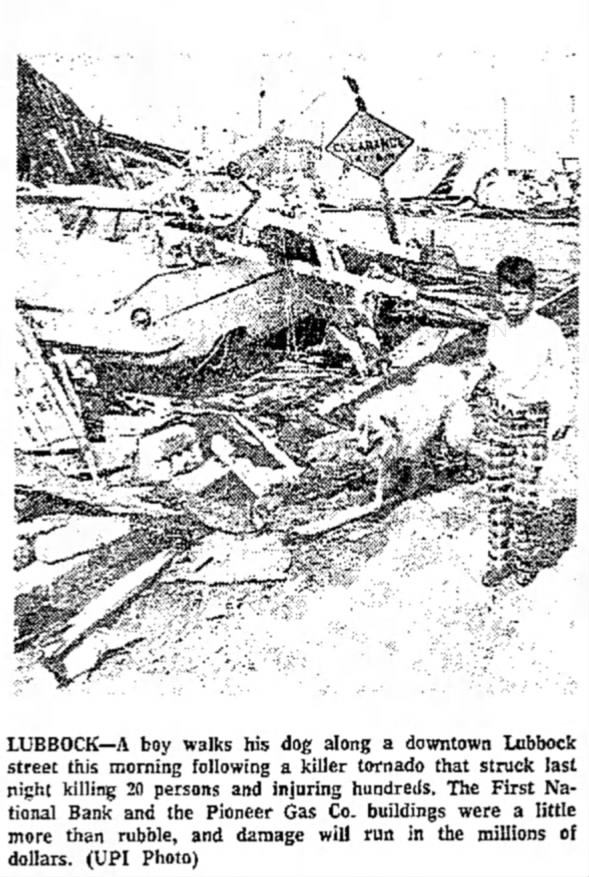 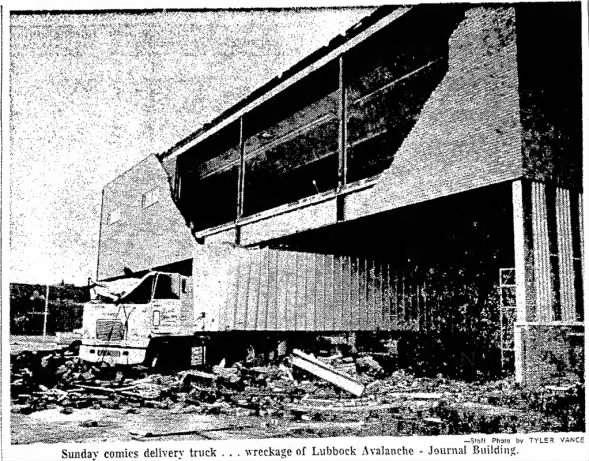 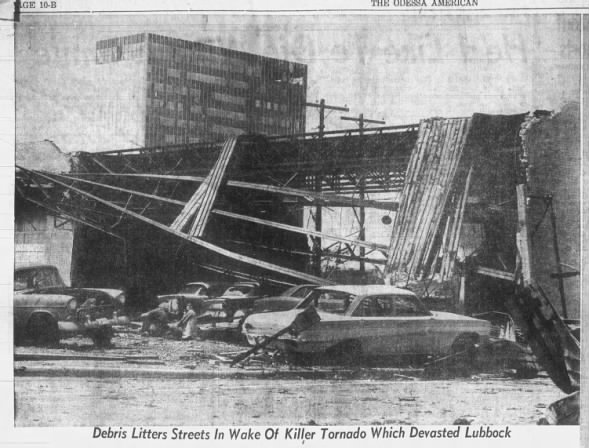 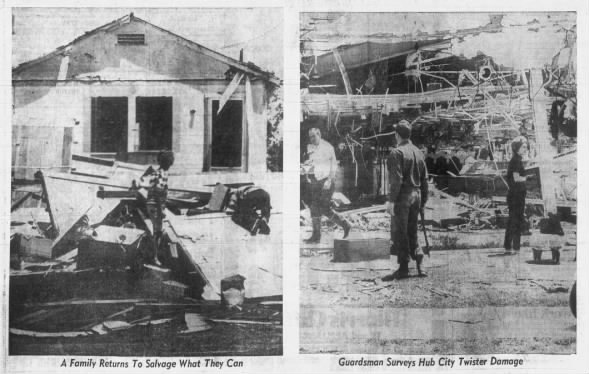 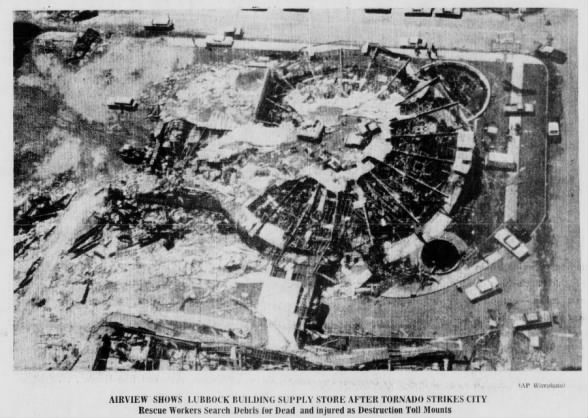 We gathered information for this event from the SPC & NCDC Databases, the May 1970 Storm Data Publication and Thomas Grazulis in Significant Tornadoes and found the following differences:

Lubbock Tornadoes of 11 May 1970 by Tetsuya Theodore Fujita