This tornado moved 20.6 miles through parts of Major and Garfield Counties.  The max width was 880 yards.  There were 25 injuries and 1 fatality reported.

Here is the NWS Summary of this event:

The tornado formed 3 miles north and 8 miles east of Cleo Springs and moved along an east-southeast path causing only minor damage until it reached OK State Highway 58 about 2 miles north of Ringwood, OK where it destroyed 2 mobile homes. The tornado then grew wider and intensified, producing heavy damage to about a dozen farms in eastern Major County. It leveled all buildings at a farm northeast of Ringwood. About 1 mile east and 1 mile north of Meno, the twister hit a farmhouse as the occupants were trying to flee in a pickup truck. Two people were injured and a girl was killed when she was thrown about 100 yards from the home.

At 4:55 pm, the tornado moved through the southern and eastern parts of Lahoma, OK. Three mobile homes were destroyed and about 6 more were damaged. Two houses were heavily damaged with others receiving less damage. The high school, town hall and fire department building were also damaged, and minor damage occurred to other numerous structures.

The tornado weakened and narrowed as it moved east-southeast, striking the Perry Acres housing development west of Enid, OK. A pickup truck was overturned and a van was heavily damaged. Several other vehicles also received damage. A barn was destroyed and several homes received significant damage. The chimneys for at least two homes collapsed within the houses. At one location, a travel trailer was thrown 50 feet in one direction while a stock tank was carried about 0.25 miles in the opposite direction.

The tornado then moved through the Imo area, about 4 southwest of Enid. One man suffered a heart; attack and died while seeking shelter at a grain elevator near lmo. His two sons were injured while trying to break glass in a window to get access to a telephone. The grain elevator was damaged, and two persons were injured when it later collapse onto their pickup. The tornado then dissipated about 1 miles east of Imo at 5:15 pm. Large hail and heavy rains accompanied the storm.” 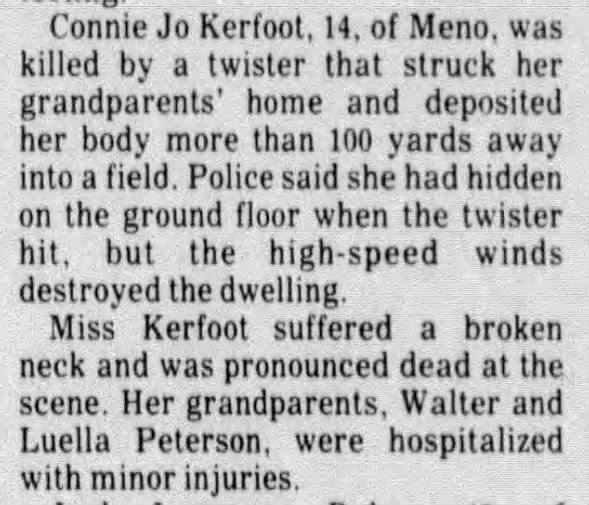 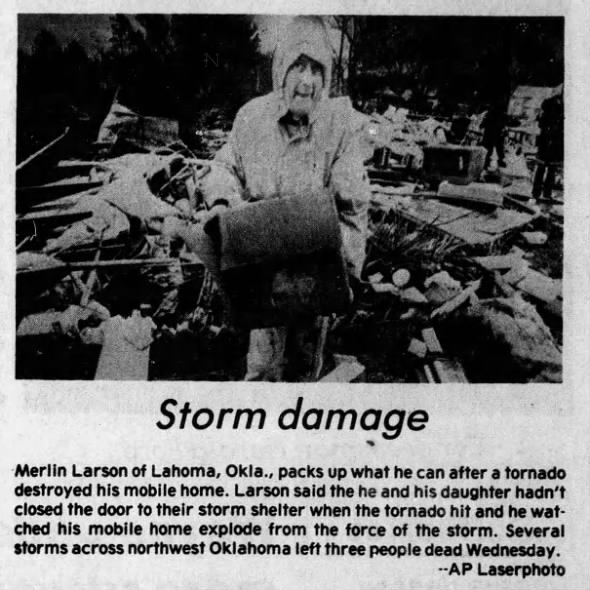 We gathered information for this event from the SPC & NCDC Databases, an overview from NWS Norman which includes Storm Data information and Thomas Grazulis in Significant Tornadoes and found the following differences:

Overview of Killer Tornadoes in Oklahoma (1950-Present) via NWS Norman