Per the Storm Prediction Center Database, 41 tornadoes occurred on June 11, 2008 across 5 states. Two long lived supercell thunderstorms produced tornadoes across Northeast Kansas.  An EF3 hit parts of Dickinson and Geary Counties including the town of Chapman.  There was extensive damage here, 3 injuries and 1 fatality.

After hitting Chapman, the supercell moved on to the northeast and produced another tornado, the strongest of the day, an EF4 in parts of Riley County.  The tornado developed SW of Manhattan causing damage to a farm. It moved NE toward town hitting the Miller Ranch Area.  It was here that EF4 damage was found.  Fifteen well built homes were completely destroyed. The tornado continued its track northeast eventually moving onto the Kansas State University campus.  Approx. $37 million dollars in damage was done to the campus.  There were no injuries or fatalities reported with this EF4.

The tornado touched down to the southwest of Manhattan on a farm, and first destroyed a large machine shed, and threw a grain cart into an adjacent field. The tornado tracked to the northeast and destroyed several homes that were in the process of being built.

Then, the tornado entered the Miller Ranch area of Manhattan, where the EF-4 damage was observed. Fifteen well built homes were completely destroyed. Nearby in the Amherst residential area, approximately thirty homes were damaged. A local newspaper reported that 45 residences in Manhattan were destroyed, 142 were damaged, and 637 were affected by the tornado. Ninety three apartments or duplexes, twenty mobile homes, and ten total businesses were impacted.

Thereafter, the windows at the Little Apple Honda/Toyota car dealership were blown out, and several cars on the lots were tossed. A nearby hardware store and several self-storage units were demolished. Other nearby businesses were also damaged. The Lee Elementary School was then damaged.

The tornado continued toward the Kansas State University campus. There, the roof was blown off a fraternity house, windows were blown out of buildings, the USDA Wind Erosion Laboratory roof was damaged, and debris from damage to the southwest was blown across the campus. Summer classes at the University were shuffled around to find appropriate, undamaged buildings to hold summer students. New student orientation was also going on the week the tornado struck. It was reported that $37 million dollars in damage was done to the KSU campus alone.

The total preliminary damage estimate from the Manhattan tornado was approximately $71 million. Off-campus, $22 million in structural damage was reported, as was $7 million in vehicle damage.

Via NWS Topeka: Below is a split radar image, depicting both radar reflectivity (left) and velocity (right). On the velocity product, green indicates motion towards the radar, while the reds indicate motion away from the radar. Look for the tight 'couplet' of red and green that develops just west of Chapman, then moves northeast through Manhattan. The storm reorganizes, and the couplet redevelops in Pottawatomie county and moves northeast until dissipating near Wetmore. Look for the hook feature in the reflectivity associated with the couplet. Also notice the burst of white after the storm moves through Chapman - likely due to debris in the storm after the tornado hit the city. 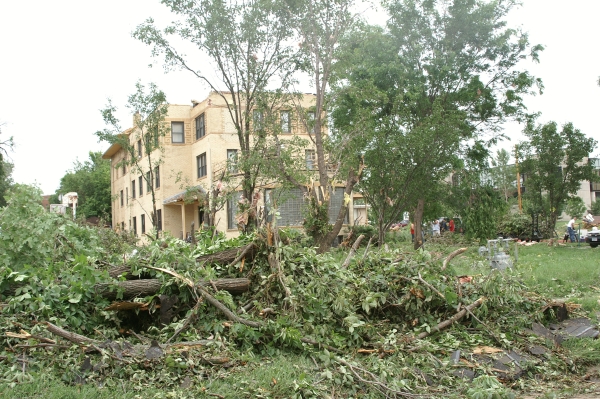 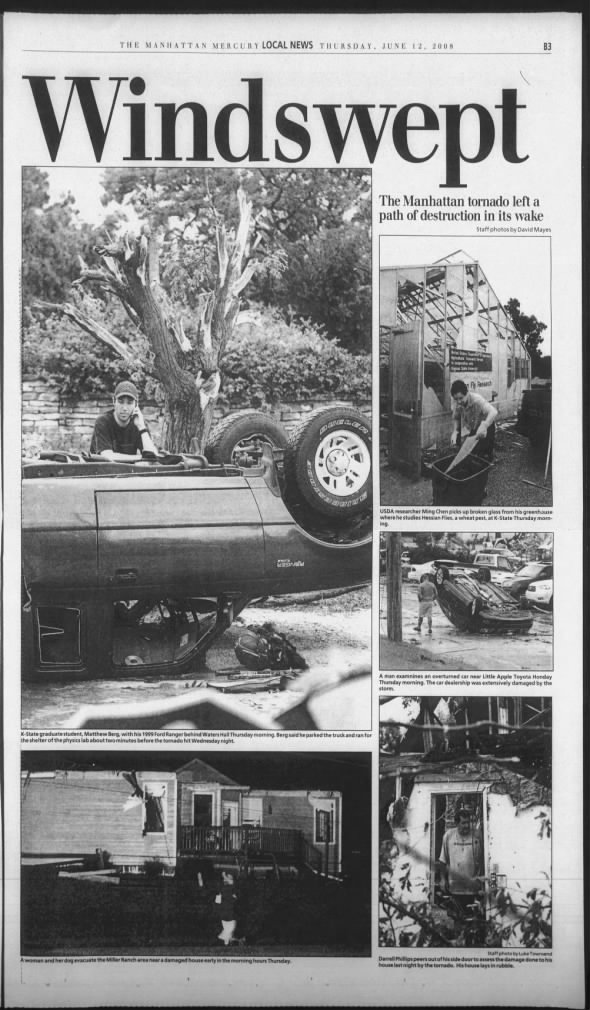 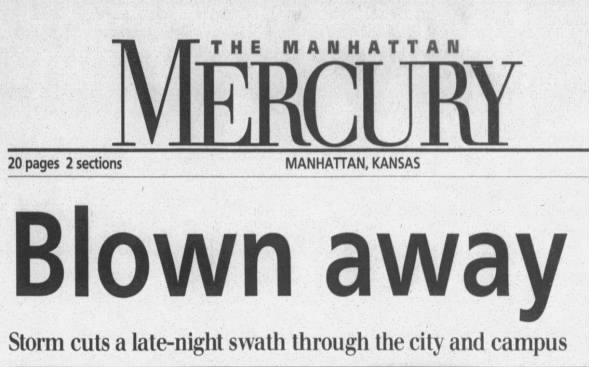 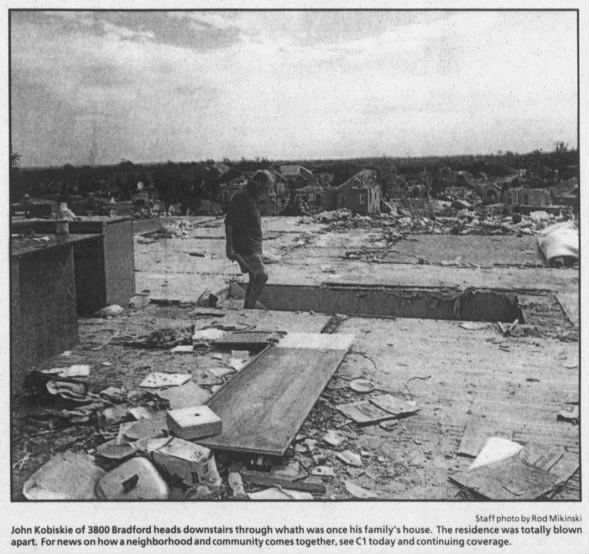 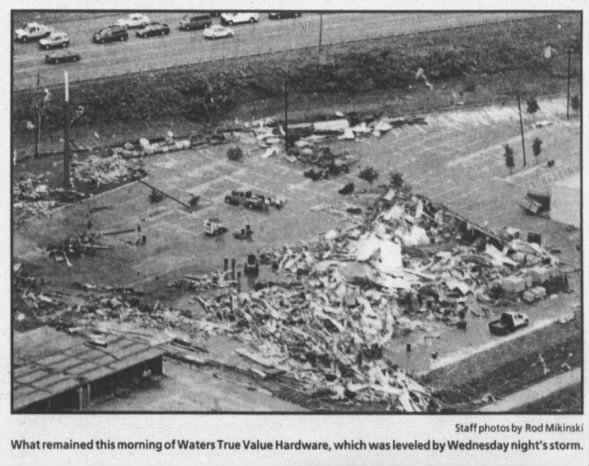 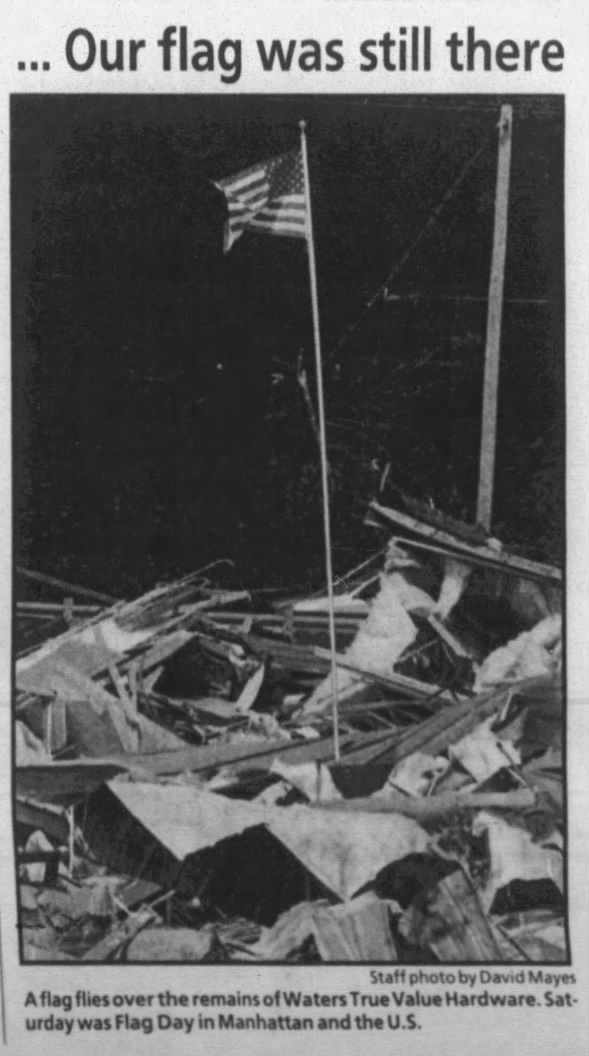