Per the SPC, there were a total of 8 tornadoes on July 18, 2004. All of them were in North Dakota. The strongest of these, an F4, is the topic of this summary. This was just five days after the widely covered Roanoke, IL F4 tornado, which bore a few similarities to this event.

The Noot Farm Tornado (as it is commonly referred to at the NWS Grand Forks) has been almost entirely removed from meteorological history. However, this was among the most intense tornadoes of the 2000s. A special thanks to the Warning Coordination Meteorologist of the National Weather Service in Grand Forks, Greg Gust. A large portion of the information, pictures, and videos were provided by him for this summary – including incredible details that would have otherwise remained unknown and lost to history.

The Marion tornado began in Barnes County, about 12.5 miles northwest of Litchfield, around 7:25 pm CST. Initially, it was a lighter colored cone-shaped tornado. Despite an exceptionally high cloud base of over 1,600 meters AGL (above ground level), the vortex intensified as it slowly meandered to the south-southwest. The average forward speed of this tornado was a modest 26.7 mph.

About 5 miles after forming, the tornado moved over a small farm. The damage here was rated as F2, and was limited to the snapping of trees and tipping over small silos.

Growing stronger the tornado moved due south for another 1.1 miles, scraping by another old and abandoned farm. Despite not directly hitting the property, it caused damage that was rated F3. By this point the former white cone was turning a dark brown, becoming obscured by dirt that was being sucked into it. A large, abandoned farmhouse completely disappeared, leaving only wooden sill planks lining the concrete foundation. Just east of here, hardwood trees were partially debarked. Immediately east of the trees, grass and several inches of soil was deeply scoured from the earth in a growing, unbroken streak. Corn and hayfields, as well as grass pastures, were all scoured away.

From this point, the tornado continued to widen and intensify further into one of the most intense tornadoes to affect the Northern Plains. The next two miles were spent over thick grassy fields as it slowly began to curve towards the southeast. The grass was utterly stripped from the earth. And not just the grass; the ground was scoured here to a depth of seven or eight inches. In fact, as this tornado continued to the southeast toward another farm, the swath of ground scouring reached a maximum of 700-yards-wide. This is one of the widest such swaths in tornado history. The only tornado that can be officially confirmed to have a wider swath of ground scouring is the May 27, 1997, Jarrell TX, F5. It is at this point that the tornado reached maximum intensity. The mile-high stovepipe was so fully shrouded in soil one could hardly even see the rotational motion of the funnel within. The Noot Family had been out baling hay when they saw the tornado bearing down on them. Quickly they sought shelter in the basement of a neighbor’s home. Their neighbor ultimately decided that his concrete basement was not safe enough, and the group opted to outrun the tornado in their car.

Weakening and narrowing, the tornado crossed a pond and tore into the farm. The damage to the Noot property was extreme. The NWS surveyor who rated this tornado, Greg Gust, often described in Skywarn Spotter classes that this tornado had “picked up everything in the farmyard and mixed it, like a blender on liquefy, and deposited it as wind-rows of debris”.

After crossing the pond, the tornado swept away several steel-framed outbuildings to the north. This was on the fringe of the most extreme swath but was still affected by violent winds. A large metal truss was wrapped around a tractor, and other steel beams were wrapped around trees. That tractor was originally in an outbuilding that was dismantled, the tractor was thrown into the air, and landed with this I-beam wrapped around it. A bulldozer was mutilated by flying debris. The remains of a tractor body with a single large wheel also came to rest in this area.

Both of the houses on the Noot Farm were obliterated. According to the surveyor, both were built to code and anchor bolted. The first was a slabbed single-story residence. The floor joist was ripped from the cinder block foundation and deposited some distance away. A small portion of the attached subflooring was removed by the tornado. A large part of the cinder block basement walls caved in. A few years after the tornado, Greg Gust learned about an incredible feat of damage here. In the basement of that home, there was a safe. The safe was ripped out of the basement and thrown several miles away by the tornado. In light of the contextual evidence and especially this feat, he told me, “I have always felt that this very well should have been rated as F5, especially given that information and the new EF-Scale with the indicators we have available today.”

The second home on the property was further away from the core of the strongest winds but it was also destroyed. It was a split-level home with a garage that had been completed in its construction a day before.

The tornado continued to ravage the Noot Farm. More outbuildings and farm equipment were obliterated. Massive silos were wiped away and torn to shreds. The shelterbelts sustained extreme denuding and debarking. All of the pine trees in the shelterbelts were left as barren, snapped, trunks that sustained various degrees of debarking. Pieces of grain bins were twisted around or sliced into trees. The vehicle damage was extraordinary. Vehicles were rendered unrecognizable, one car was twisted around a tree. A tractor-trailer had been located on the property. The semi-truck and trailer, which was full of grain and weighing tens of thousands of pounds, was thrown 250 yards to the north. Both of the two components were some distance from each other. Low lying shrubbery was ripped up and shredded. A boat was thrown a quarter mile to the east; the boat trailer, a quarter-mile south.

Earlier, I mentioned how Greg wished he had rated this tornado an F5. I want to quote another statement shared with me from him about that. “As Steve and I drove the track of the tornado, reviewing damage at earlier locations, and as we approached the Noot Farm from the north, seeing the spread of debris before us, Steve turned to me and remarked, “Greg, this is the worst damage I’ve ever seen. We’ll have to determine why not to call this an F5!”  What Steve meant was that we had the authority between us to call this either an F4 or F5 and that the damage was so catastrophic we had to really consider whether we could truly support F5 or just the lesser F4 rating.” In the end, Greg would regrettably go with a conservative 255 mph F4 rating for the damage to the Noot Farm – the highest possible below an F5.

The tornado chewed through more farmland as it churned away from the Noot Farm, deeply scouring vast stretches of formerly green fields. A field cultivator was torn apart and sandwiched into another object that cannot be identified. One-piece had been thrown far into the swath of torn-up earth. The sheer scale of the ground scouring that was photographed below, even well after maximum width and intensity, is astounding.

Path of the Tornado 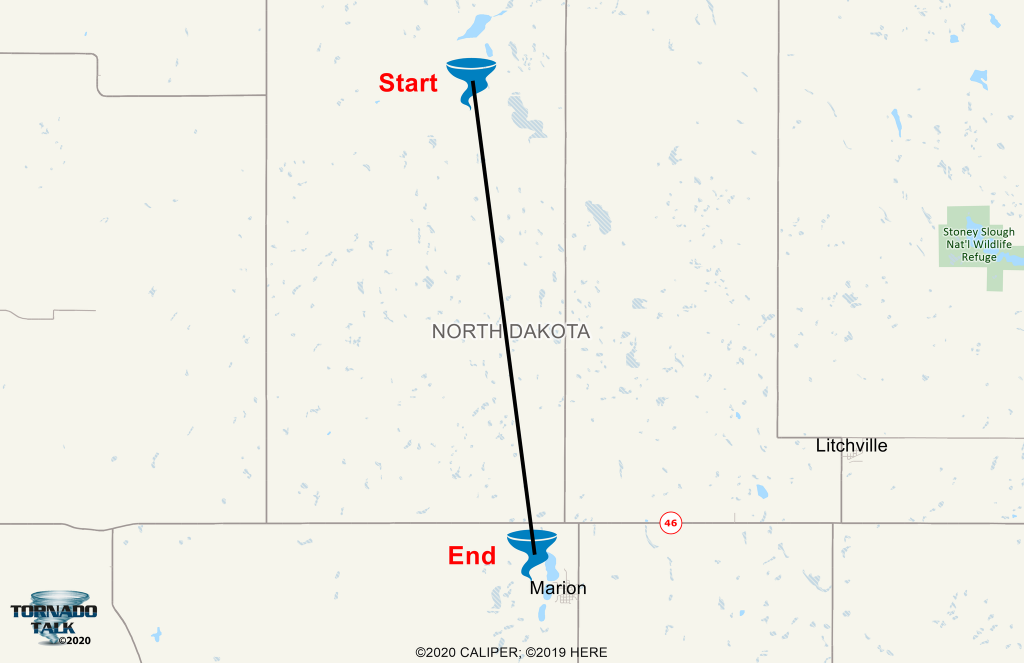 Images of the Tornado

Videos of the Tornado 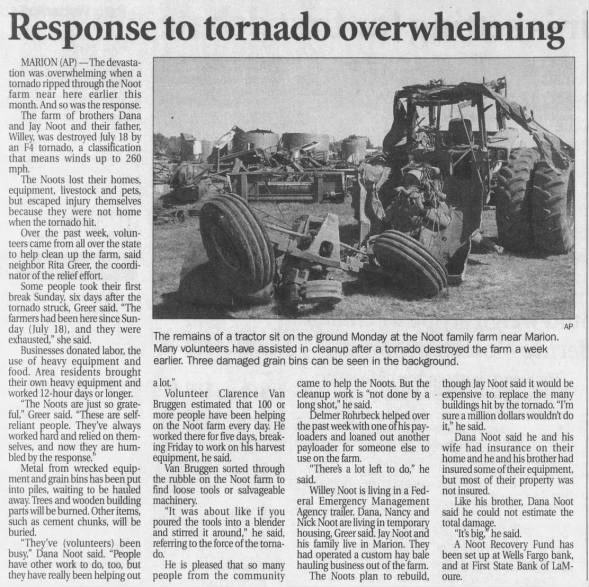 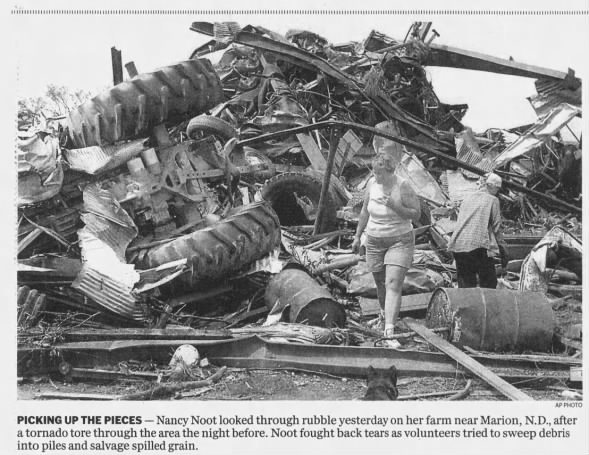 We gathered information for this event from the SPC & NCDC Databases, The July 2007 Storm Data Publication, and personal communications with the WCM from NWS FGF, Greg Gust.