On November 7, 1995, an outbreak of 40 tornadoes affected the Southeast. 28 of these tornadoes occurred in the state of South Carolina. This summary looks at the strongest tornado of the outbreak, a quick hitting F4 near the town of Marion. This rating is disputed, which we will delve into down below.

The brief tornado formed about 2.5 miles south-southeast of Marion and tracked east for less than 3/4 of a mile. It was a QLCS tornado, meaning it was spawned by a squall-line. A mobile home was completely destroyed, and a house sustained major roof damage. The Pleasant Grove Baptist Church was heavily damaged. The sanctuary portion of the church was leveled. The church bell was found 400 yards to the east of the church. One minor injury was reported.

Thomas Grazulis in Significant Tornadoes rates the tornado as an F2. Here is why he says it was only an F2. “Attached to a roof and the wooden structure that surrounded the bell, the 150-200 pound bell could easily have traveled 400 yards in F2 winds. The ranking of a short-path, 40-yard wide tornado near the top of the intensity scale (F4) seems dubious, even without knowledge of the damage left behind. Knowing that the rating is based, subjectively, on the movement of an object, positioned at the very top of a building, the rating moved from unlikely to absurd. Professor Fujita, on page 106 of Significant Tornadoes, showed a 390-pound brick chimney could be carried for 400 feet by as little as 127 mph wind. That example used downbursts winds that did not have the vertical wind component that accompanies a tornado…. A vertical wind component that might greatly assist the flight. Other damage from the tornado is consistent with F2.” 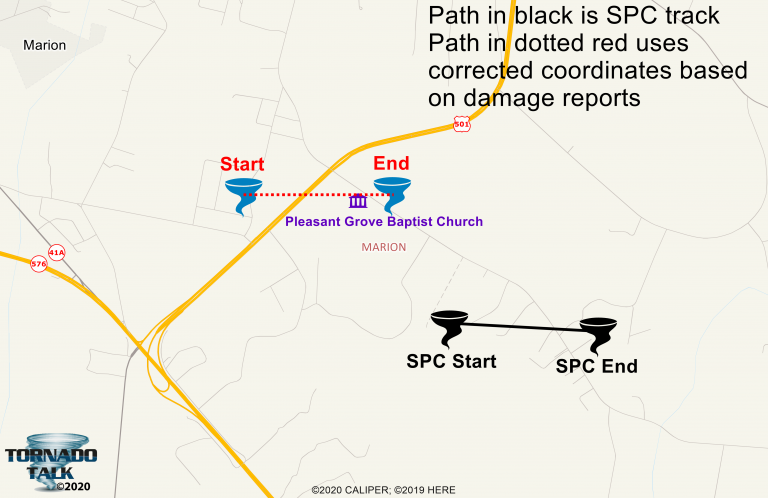 We gathered the information for this event from the SPC & NCDC Databases, the November 1995 Storm Data Publication (SDP), and Thomas Grazulis in Significant Tornadoes and found the following differences