After a devastating day with 27 tornadoes on March 21, 1952, parts of the south were again dealing with severe weather on March 22.  This time four tornadoes were confirmed in TN, KY, and AL.  This narrative will look into the details of the strongest tornado that occurred on this day.  It was given a rating of F4 and traveled through parts of Morgan and Madison Counties in Alabama.

Information for this event was gathered from the SPC Database, the March 1952 Climatological Data National Summary (CDNS), and Significant Tornadoes by Thomas Grazulis.   First of all, the SPC only lists Morgan County in the path.  CDNS and Grazulis list Morgan and Madison.

CDNS did not give much detail on this event.  They provided broad information on damage in Morgan and Madison County.  They did mention damage in the community of Redstone Arsenal.

Grazulis gives much more detail.  One of the major differences pertains to the tornado path.  He states the following:  “Moved NE from Massey, passing west of Falkville, to near Hartselle, Winton, and the Redstone Arsenal.”  When you plot the official SPC coordinates, the path is completely different.  It starts near Decatur, due north of Massey.  It does end near Redstone Arsenal.  But that starting point is incorrect.

35 homes were destroyed, 39 damaged in Morgan County.  Per Grazulis, some were “leveled to the ground” in the communities of Massey and Plainview.  In Madison County, four buildings were destroyed, six damaged.  Many buildings at Redstone Arsenal sustained damage.

All sources list four fatalities.  Per Grazulis, an elderly couple was killed at Plainview.  There was a fatality west of Falkville and in Winton.

I found a newspaper clip that lists 5 fatalities: 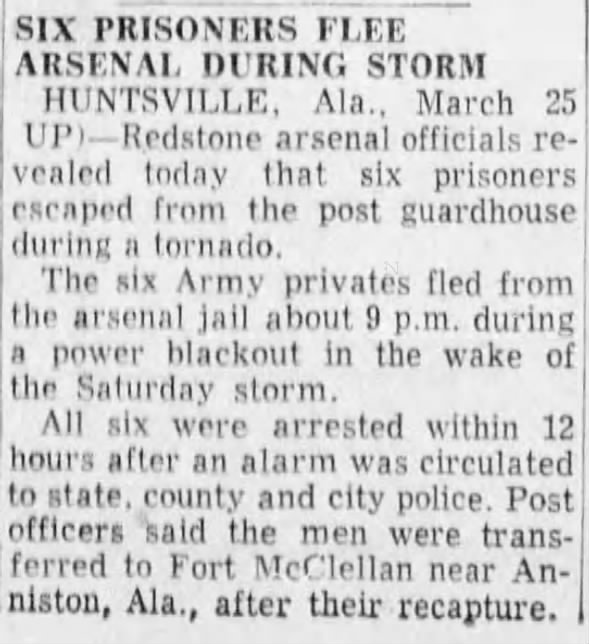 We gathered information for this event from the SPC & NCDC Databases, the March 1952 Climatological Data National Summary (CDNS) and Thomas Grazulis in Significant Tornadoes and found the following differences: