On this day in 1971: An F4 traveled 50 miles through parts of Gibson, Carroll, Benton and Humphreys Counties. The max width was 100 yards. There were 137 injuries and 3 fatalities reported. The tornado left an almost continuous path of destruction through Huntingdon and Buena Vista in Carroll County to Eagle Creek in Benton County. Read the full summary here! 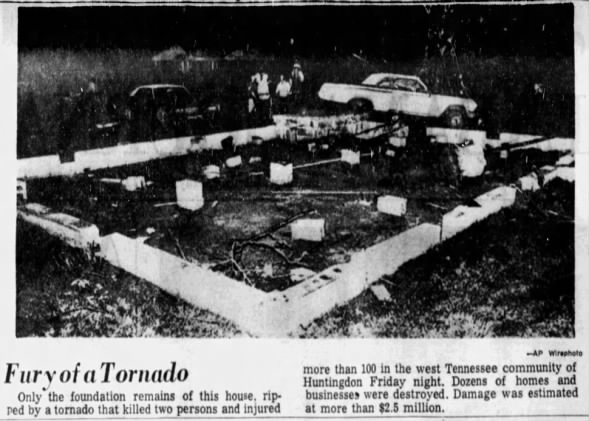 May 7, 1933: An estimated F3 tornado crossed 15 miles through Tipton County, TN. Approximately 30 homes and 75 other farm buildings were damaged/destroyed. Four were killed in a home near Charleston. Another two people were killed six miles south of Covington

On this day in 2016, an EF2 tornado tracked for about eight miles through parts of Weld and Morgan Counties in CO, near Wiggins. The path was up to 1620 yards wide, and two people were injured as several trailers were destroyed. Source.

On this day in 1840, the second deadliest tornado in the US ripped a 35-mile path through Concordia Parish, LA, to Adams County, MS. At Natchez MS, the mile-wide funnel leveled buildings and sunk several boats on the river. At least 48 people were killed in Natchez and 269 on the river. Reports that “hundreds” of people were killed on plantations in LA are possible but never confirmed. The official death total stands at 317, with 109 people injured, though it is likely that these numbers are too low. Thomas Grazulis lists this tornado as an F4 in his Book “F5-F6 Tornadoes”.   Source: F5-F6 Tornadoes.

On this day in 1952: The concept of the integrated circuit, the basis for all modern computers, is first published by Geoffrey Dummer. Check out more historical events at onthisday.com!

Gary Cooper was born May 7, 1901, in Helena, Montana. He was a motion-picture actor whose portrayal of homespun characters established him as a glamorized image of the average man. He was one of Hollywood’s most consistently popular and beloved stars. He died in 1961. Source:  Britannica.

On this day in 1947: “Kraft Television Theater” premieres on NBC. Get more daily history at onthisday.com!

On this day in 2000: Britney Spears went to No.1 on the UK singles chart with ‘Oops!… I Did It Again’. Written and produced by hit-makers Max Martin and Rami Yacoub, who had previously collaborated with Spears on ‘…Baby One More Time’.  Get into the groove with more music trivia at thisdayinmusic.com!