Good Friday, April 10, 2009: An outbreak of 64 tornadoes across the south.  This summary looks at the strongest of the day.  It was given a rating of EF4 with estimated maximum wind speeds of 170 mph.  It moved 23.25 miles through parts of Rutherford County, TN and the town of Murfreesboro. There were 2 fatalities.  Kori Bryant and her 9-week-old daughter Olivia were killed  Per the NWS Nashville, this was the first killer tornado in Rutherford County since records began in 1950. 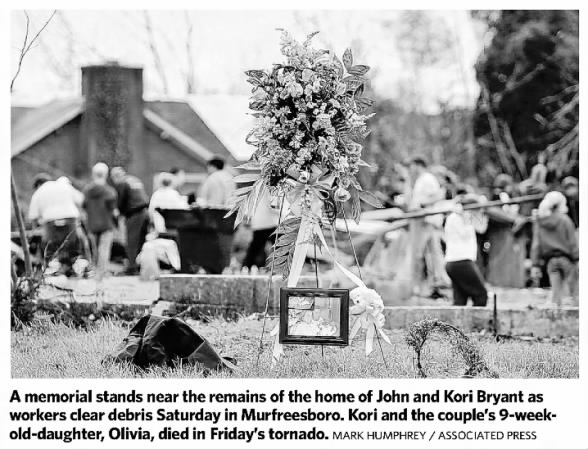 There were a couple of areas along the path where EF4 damage was determined:  In the Highland Park Drive Neighborhood and the Tomahawk Trace Area.  Several well constructed homes were destroyed in those areas, hardwood trees were debarked, and vehicles were tossed considerable distances.

The NWS survey determined the tornado began just north of the Eagleville Community in the far southwestern part of Rutherford County.  Initially, the path was intermittent with some tree and roof damage.  The survey team then inspected continuous damage from Rocky Grove Road northeast to a residence on Newman Road approximately 2 miles north of the Windrow Community.  Extensive tree damage was noted along the path…along with multiple instances of roof damage to homes.  The most significant damage was on Patterson Road 1/2 mile west of Windrow.  A brick home was completely destroyed and thrown almost completely off its foundation.

Additional areas between Stones River Battlefield and Medical Center Parkway in Murfreesboro were surveyed.  Two homes on Wilkinson Pike and two homes on Highland Park Drive were completely destroyed.  One of the homes did appear to be properly anchored to it’s foundation while three were not.  Per a newspaper report, at Stones River Battlefield, a quarter mile swath of fallen and damaged trees stretched one mile across the battlefield, along with numerous fences being destroyed, closing parts of the park to tourists.  One particular fallen tree damaged a 60 foot section of the national cemetery wall and a cannon display.

The tornado tracked due northeast for the first 9 miles then began a steady turn to the right.  By the time the tornado lifted it was moving to the east-southeast.  Additionally, videos of the tornado indicated a multiple vortex appearance to the tornado and the aerial survey was able to detect focused areas of damage within the larger path.

The aerial survey showed 12 to 15 homes which were completely destroyed and dozens others which suffered significant damage.  A 2-story office building had the complete upper floor removed.  Numerous large vehicles were picked up and tossed, including several semi trailers which wound up piled together near the intersection of Thompson Lane and Broad Street. Significant roof damage and some wall collapse on homes were also noted.  Several well built homes suffered significant exterior and interior wall failure.

Three other areas received significant damage.  The first area was along Bushnell Drive just north of Compton Road.  A well built 2-storty brick home was almost completely destroyed with just part of the kitchen wall remaining standing.  The second area was near the intersection of Haynes Drive and Sulphur Springs Road.  Three homes on Cornwall Court were completely destroyed and thrown clear of their slab foundations, however it did not appear any of the homes was properly anchored.
The third area of enhanced damage was along Battleground Drive between D`Ann Drive and Tomahawk Trace.

The National Weather Service Assessment team was joined by a Murfreesboro Code who assisted with assessing construction quality at this location.  Three homes were completely blown clear of their foundations and destroyed.  One home was not anchored/fastened to the foundation, however, the other 2 were very well constructed.  Several trees were also debarked at this location.

Additional information provided by the Rutherford County EMA through a newspaper report stated that over 845 homes were damaged, of these 117 were destroyed, 298 had major damage, 175 had minor damage, and another 255 were affected in some way.  519 Structures were also affected, including 77 destroyed, with an additional 300 plus homes and structures impacted in some way just outside of the city limits.

Radar & Photos via the NWS Nashville 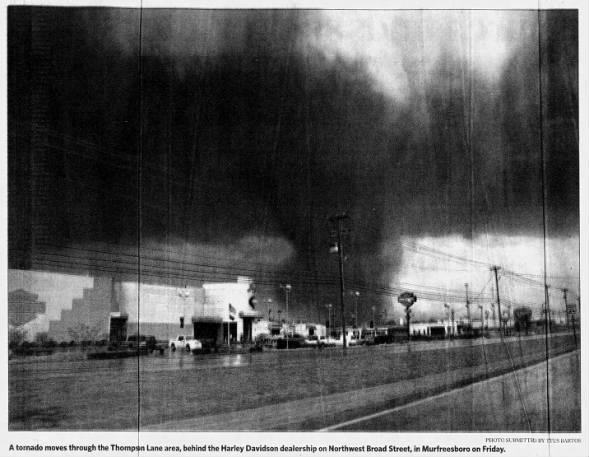 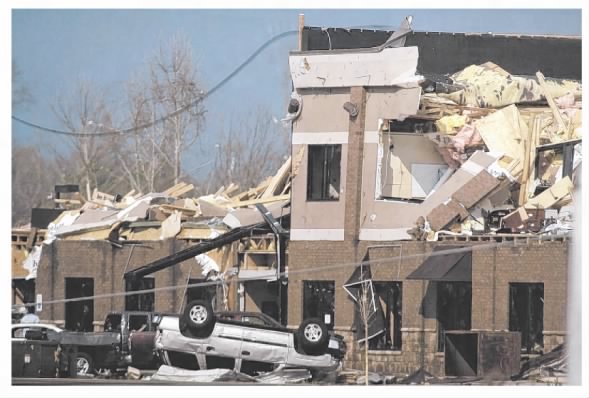