The SPC Database lists 9 tornadoes on March 16, 1965, including a long-track F4.  This tornado is listed with a path of 82.7 miles through parts of Grant, Kay Counties in Oklahoma, and Sumner, Cowley Counties in Kansas.  After digging into the Storm Data entry and Significant Tornadoes by Thomas Grazulis, it would appear this was more than likely not a single path.  Storm Data mentions the tornado touching the ground a few times and also notes multiple funnels.  Grazulis has two entries for this event:  1) A family of tornadoes in Grant and Kay Counties, OK into Sumner and Cowley Counties, KS, and then 2) for a separate tornado in Sumner and Cowley Counties.  The family of tornadoes he has given an F4 rating, the separate tornado an F3 rating.  I am documenting what we have from all sources on the type of damage in this area, regardless of whether it was a family of tornadoes or a single track.

A tornado developed 5.7 miles SSW of Nash, OK.  Liberty Church and parsonage were leveled.  It is noted that the tornado lifted east of Nash, 15 minutes after development.  Storm Data then states, “the fast movement of the storm was noted by the numerous touchdowns of the tornado.” Grazulis notes that the early part of the path (in Nash) probably should be counted a separate tornado.

Storm Data states the tornado passed 2 miles north of Jefferson.  There was heavy damage along a 6-mile path from US 81, 3 miles south of Medford to US 64, 4 miles east of that town.  Five farms had significant damage, and there was one injury.

The greatest damage was noted along a 9-mile-path from 5 miles NW of Deer Creek to the Grant-Kay County line.  A man was injured inside his demolished home.  15 farmsteads were hit in the Deer Creek area, six of which were destroyed.

In the extreme NW corner of Kay County, 10 summer cabins and trailer homes were destroyed at Lake Blackwell.  70 power poles were downed.  North of Braman, a 262 foot microwave tower (which was rated to withstand 175 mph winds) was toppled.  Storm Data mentions the tornado was last seen on the ground just south of the Kansas line.

The official record keeps the tornado going into Kansas.  Storm Data mentions that “a storm cell with at least one tornado and several (1 to 4) funnels” crossed the KS-OK line 5 miles south of New Haven.  A tornado hit Geuda Springs, KS and moved east to about 6 miles east of Winfield.  A microwave tower, grain elevator and several farm buildings were destroyed.  Grazulis lists this Kansas tornado as a separate event in his book. 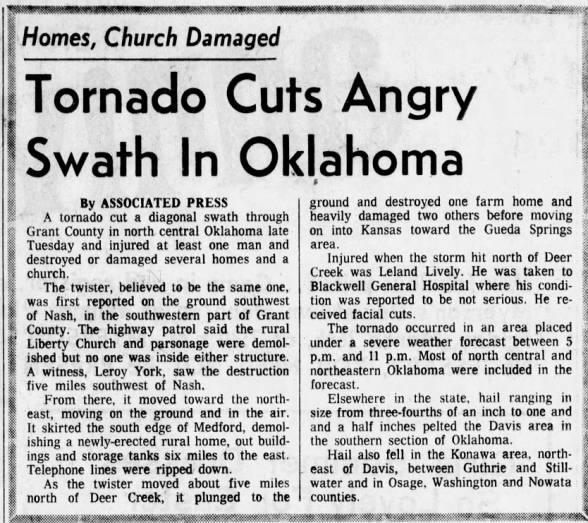 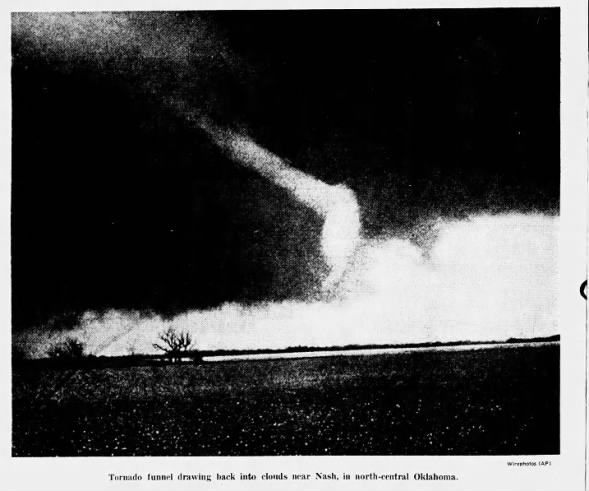 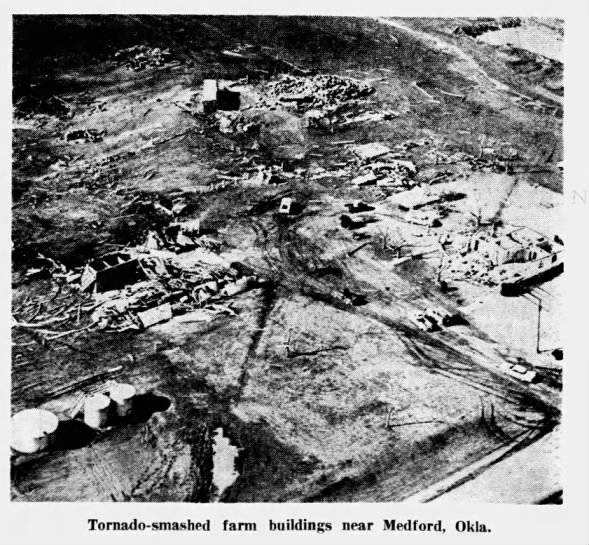 We gathered information for this event from the SPC & NCDC Databases, the March 1965 Storm Data Publication and Thomas Grazulis in Significant Tornadoes and found the following differences:

Storm Data does not list specific counties for Kansas.  They just mention “south-central”.