Seven tornadoes moved through parts of Mississippi to start what would be one of the most active tornado years on record.  We look at one of two EF-3 tornadoes that occurred.  During the mid-afternoon of January 1, 2011, this tornado tracked almost 10 miles through parts of Noxubee County, MS.  It began three miles south of McLeod and ended near Aubrey.

Damage at the beginning of the path was mainly to hard and softwood tress along E. Spann Road.  The tornado moved northeast.  It caused significant damage to a dairy farm on Paulette Road.  A barn, milkhouse, a silo and a mobile home were all destroyed.  Large trees were uprooted and several power poles were snapped.  A horse trailer was tossed about 100 yards.  Debris was found about one mile to the northeast.  Damage here was given an EF-3 rating.

The tornado continued off to the northeast destroying a metal farm building and an office off Stan Tabor Road.  An 18-wheeler was pushed approximately 25 yards.  Damage to the metal building was determined to be EF-3.

Off of Highway 14, the second story of a home was destroyed.  A barn was destroyed along Stoke Williams Road.  The tornado ended near Koehn Road.  Maximum winds were estimated at 140 mph. 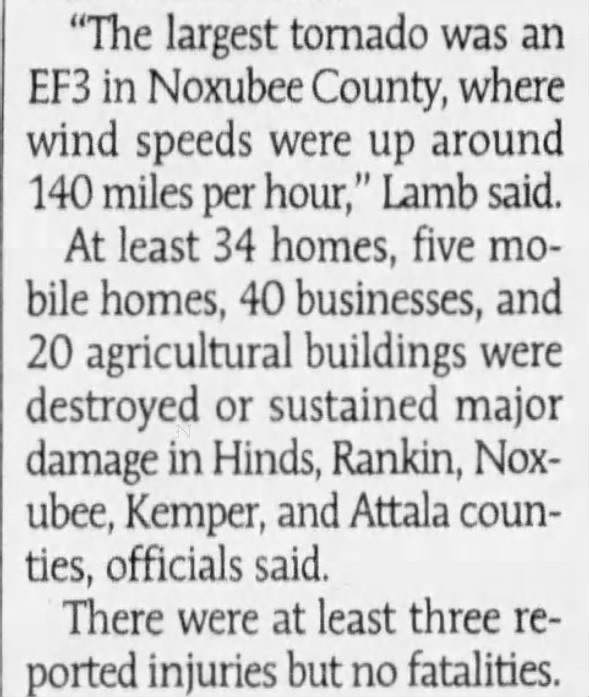