There were 12 confirmed tornadoes in the state of Wisconsin on July 18, 1996. The most devastating was given a rating of F5.  It crossed just over 13 miles through Fond du Lac county striking the village of Oakfield, population at the time of 1,000.  Max winds were estimated at 265 mph.

This significant tornado started its journey at 705pm CDT approximately 4 miles WNW of Oakfield.  It moved ESE toward the village.  There were several reports that the tornado “hopped and skipped a few times” and multiple vortices were seen.  Per the NWS summary, “Witnesses reported that the tornado paused for a minute or so on the southeast edge of Oakfield.”

The tornado struck the small village at 715pm CST.  The NWS states that as the tornado began to move in, it turned more to the east and produced mainly F4 damage.  Numerous homes and businesses were damaged in Oakfield.  The Friday Canning Company was leveled.  Millions of empty
cans were carried a distance over 50 miles. Two churches and numerous
vehicles were destroyed.

Between one to four miles east of Oakfield, there was evidence of F5 damage.  In this area, four homes were demolished, swept clean from their foundations.  In the original local storm report about the tornado damage, the NWS states that steel rebar supports from one of the homes’ foundations were bent 60-90 degrees.

A few automobiles were sent airborne a distance of approximately 400 feet. (Note: The original Local Storm Report states that cars were tossed 300-400 yards.  That is not what is in the official survey.)  Their remains “were unrecognizable.” Corn fields were “reduced to short 1 to 4 inch high stubble.” There were burn marks in the fields.  The NWS notes that “the most intense damage was about 150-200 yards, although at times, some secondary damage was observed in a 400 yard wide path.”

5.5 miles east of Oakfield the tornado started heading to the northeast and weakened.  It ended 1 mile NW of Eden.

Along the path, 60 homes and 6 businesses were destroyed.  130 homes and businesses were damaged.  18 barns and numerous sheds were damaged/destroyed.  500 acres of crops were lost. Total damage amounts were $39.5 million in public/private property; $900,00 in crop losses.  Debris from this tornado was found near the Lake Michigan shoreline and there were cancelled checks discovered 125 miles away near Muskegon, MI.  Per the NWS, the sirens were blaring 8 minutes before the tornado hit Oakfield. Noone was killed and there were 12 injuries. 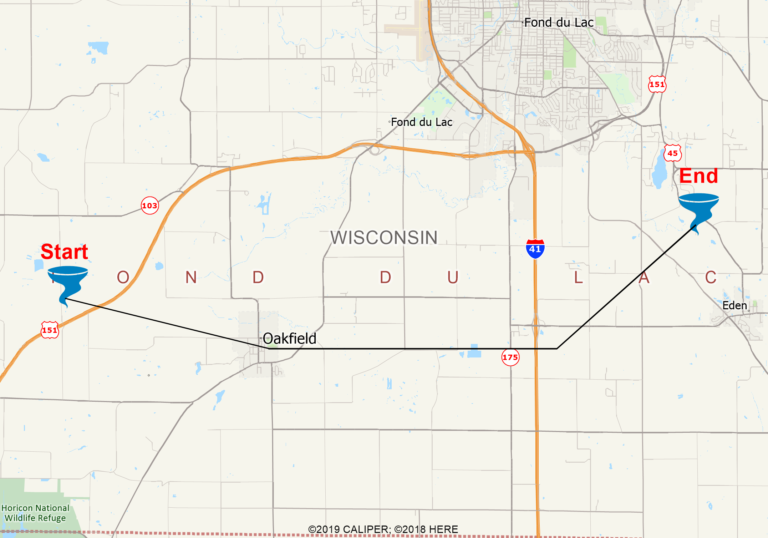 This is a rough guesstimate on how the tornado tracked based on the description in the NWS Storm Data entry.

These fantastic photos are embedded from her Facebook page.  See the full collection here.

Here is the full album of of over 170 photos from the Facebook page.  I have included a few photos.  Unless otherwise noted, photos were taken by Bob Riel.  Bob worked at the Canning Company.

Comment on this Facebook post: “The basement in the foreground is 215 2nd st. The Fearson house. The home still standing was Irv Peas home. We were in the basement on the West end. Nothing has been cleared away, this is how it looked when we climbed out.”
Photo from Chris Fearson.

Corner of Putnam and Filby.

Archived Tornado Talk Podcast about this event.  We talked with WISN-TV Chief Meteorologist Mark Baden and Warning Coordination Meteorologist Tim Halbach of the NWS in Milwaukee. 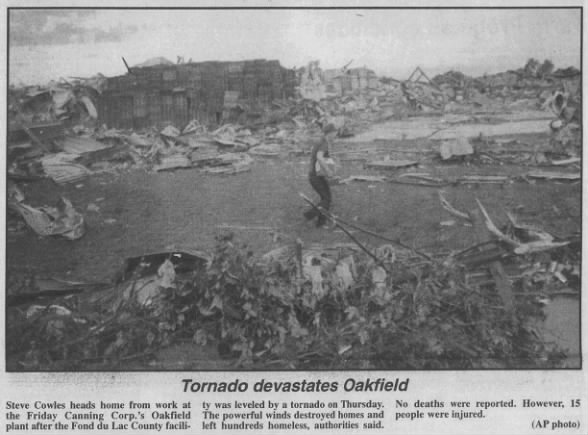 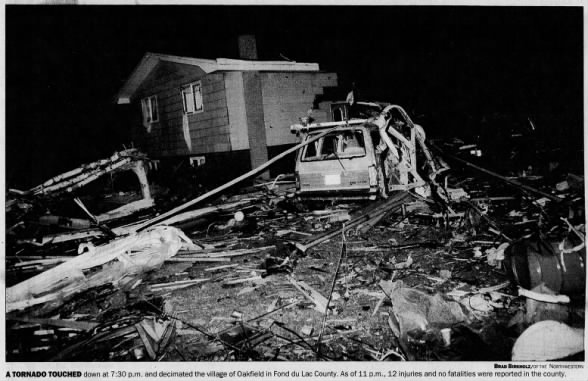 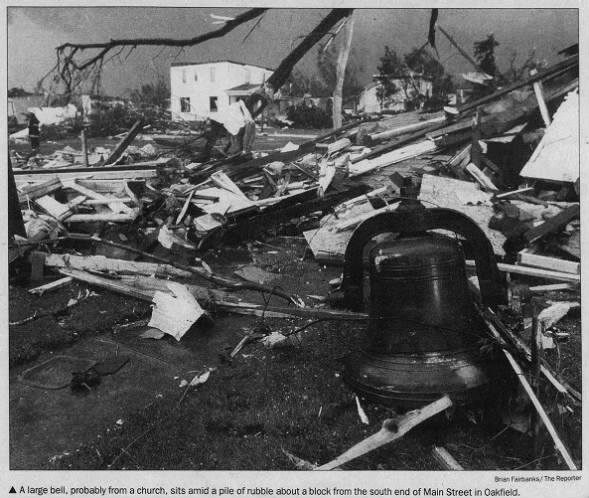 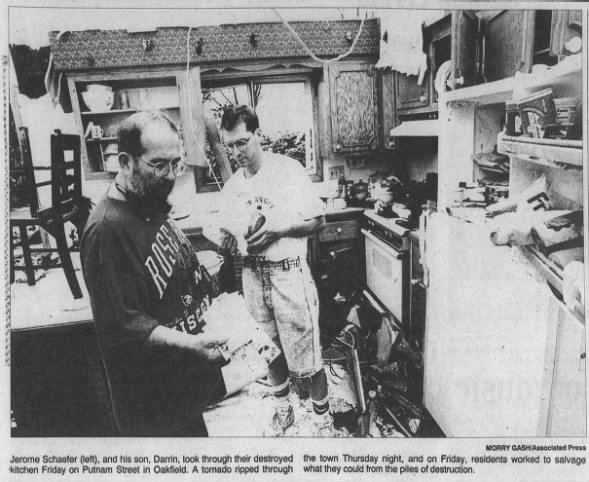 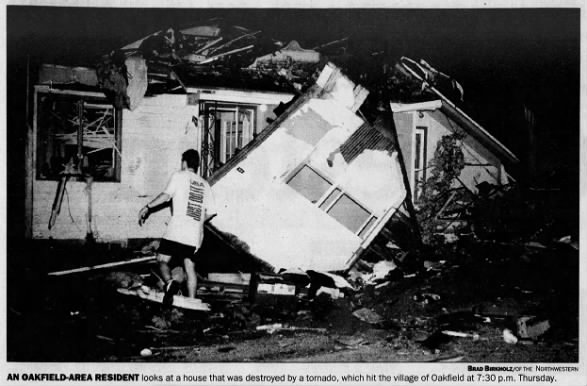 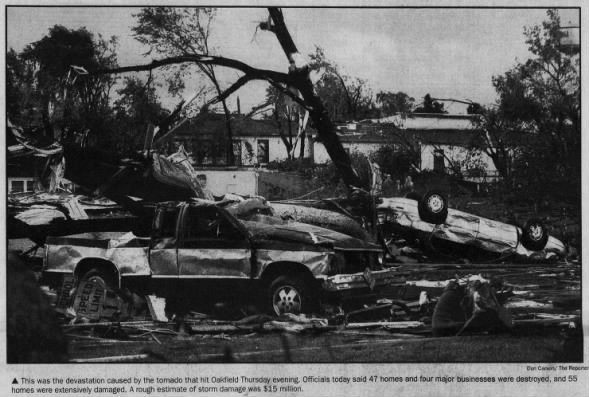 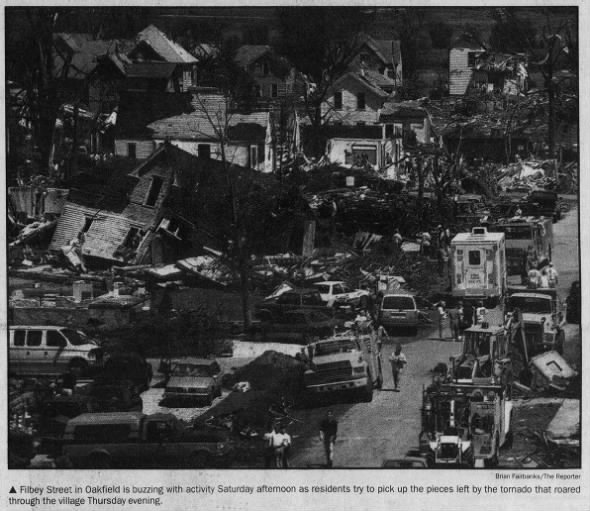 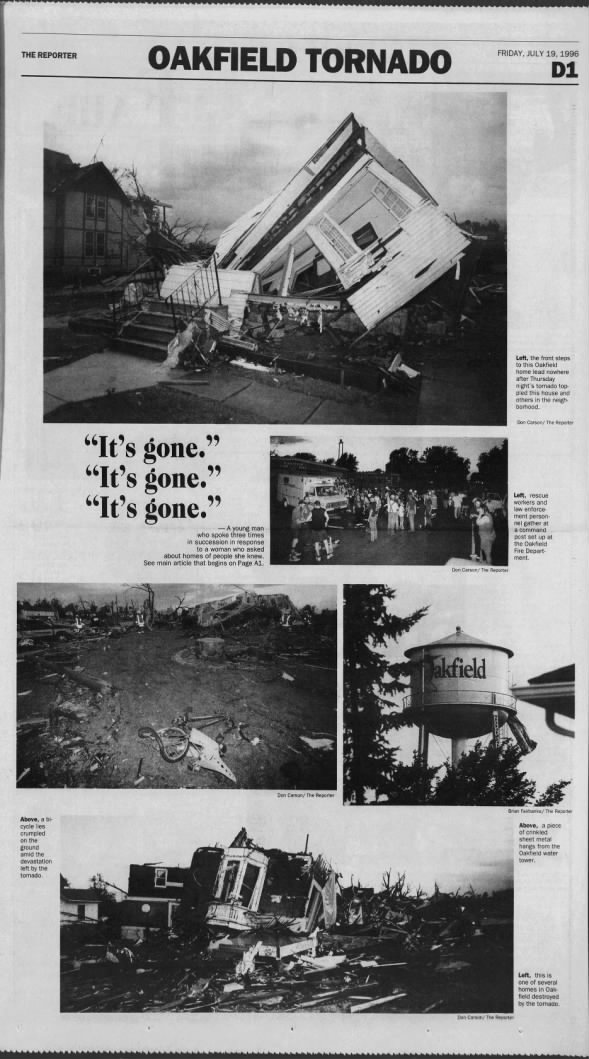