It is the only F5/EF5 on record during the month of October: The October 14, 1966 Belmond, IA Tornado. Just minutes after the high school’s homecoming parade, this devastating twister demolished a large section of town. The total path was approximately 12 miles. Six were killed and 172 injured. Read the full summary here! 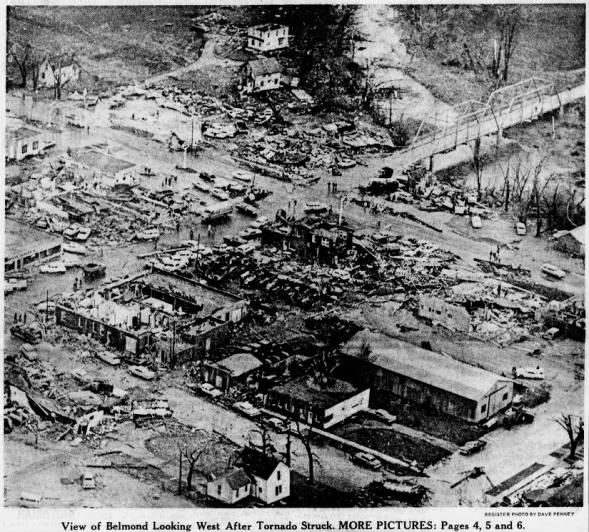 October 14, 1920: Grazulis documents a small tornado that hit two miles south of Tyler, TX. Four people were killed at a home. Debris was thrown over a mile. “The tornado scattered the bodies fro 100 yards in several different directions”.

On October 14, 2016, a waterspout moved onshore at Manzanita, OR, and plowed right through downtown. It was rated high-end EF2 with peak winds of 130 mph. Several businesses and homes were damaged or destroyed. Source.

October 14, 1981: The remnants of Hurricane Norma dumped up to 21″ of rain across portions of Oklahoma and Texas, resulting in significant flooding. Source.

On this day in 1834, the first African-American was granted a US patent, Henry Blair, for a corn planter. Check out more historical events at onthisday.com!

On this day in 1978, Usher, American musician whose smooth vocals and sensual ballads helped establish him as a rhythm-and-blues superstar in the late 1990s, was born in Dallas, Texas. Source:  Britannica.

On this day in 1979, NBC premiere of U.S. TV adaptation of Helen Keller’s life story “The Miracle Worker”! Get more daily history at onthisday.com!

On this day in 1990, Multi-Emmy and Grammy award-winning American composer, pianist and conductor, Leonard Bernstein died of pneumonia. Composed music for the 1957 musical ‘West Side Story’, and ‘On The Waterfront’. Bernstein conducted the New York Philharmonic aged 25 and wrote three symphonies, two operas, five musicals, and numerous other pieces. Get into the groove with more music trivia at thisdayinmusic.com!