“The developing tornado initially moved northwest and then west(!), passing within a mile south of our position, which was about midway between Highways 152 and 60.  We drove to the Highway 60/282 intersection, then watched in awe as the circulation intensified into a full-blown tornado and turned north across Highway 60 and the railroad tracks.  From our location, the photographic contrast was excellent; the core of the tornado was dark with light-fringed edges and a bright background.  I have only dreamed of such a photogenic view.  Chuck zoomed in with the video camera at the right moment, as if he knew he was about to capture the very sudden and dramatic example of tornado intensification, from about 1/3 of a mile away.”

Those are the words of Alan Moller from the Nov-Dec 1995 Edition of Storm Track.  He documented his chase experience in the Pampa area with Chuck Doswell for the Vortex project.  Per the NSSL website, “The VORTEX project began in 1994, with the objective of explaining how tornadoes form.  The two-year field project resulted in ground-breaking data collection and led to several follow-up studies in the late 1990’s.” The crew struck gold on June 8, 1995.

A total of 31 tornadoes are listed in the SPC Database for this day.  20 were in the Texas Panhandle.  Three were given an F4 rating.  We look at one of the F4s in this summary which was actually a part of a tornado family.

Per Thomas Grazulis in Significant Tornadoes, “The Pampa supercell spawned at least eight tornadoes.  The first was 8m SSW of Pampa.  The last was 18m WNW of Canadian.”

There are limited details in the June 1995 Storm Data Publication about this tornado family.  Here is the entire blurb about the event:

“Tornadoes in Gray County began with a brief touchdown that redeveloped into a strong tornado which moved into the center of Pampa.  About 50 homes and 25 businesses were destroyed with another 150 homes and 25 businesses damaged.  Seven people were hospitalized.  Early warnings and good visibility seem to account for the low injury and no death totals.  The tornado dissipated at the center of town with a visibly larger tornado developing just to the northeast of Pampa.  Because of the open land a higher F-scale classification could not be justified.  The F4 in Pampa was surveyed, while the other two paths are an estimate.  Additional information from spotters added another brief tornado about 2 miles east of Pampa.”

This blurb captures 4 of the tornadoes produced by this supercell in and around Pampa.  Per the Storm Prediction Center:

Grazulis states the following about the rating:  “The F4 rating is subjectively based on the movement of industrial equipment weighing up to 30 tons.  Only strong F2 to minimal F3 damage was done to homes, as the tornado had weakened by the time it arrived in the residential area.  Some rough photogrammetry of the rotational speed of the funnel by The Tornado Project indicated that about 100 feet above ground level, the rotation was in the 200-250 mph range, not counting a very high vertical wind component, probably well in excess of 100 mph.” 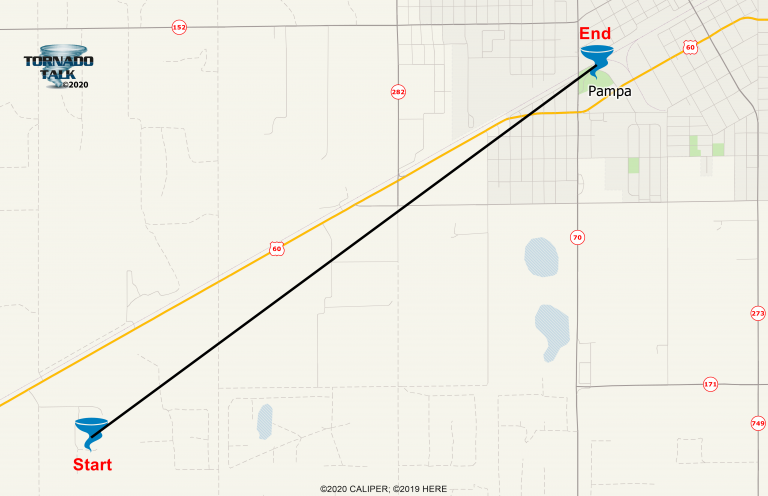 Many thanks to the NWS Amarillo for emailing us this radar loop from June 8, 1995.

Here are a few of the spectacular photos taken by the late Alan Moller for Storm Track. 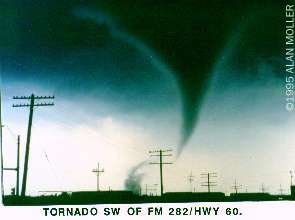 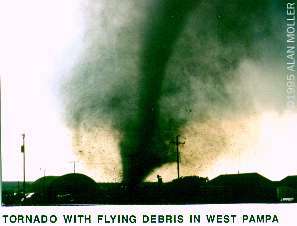 Facebook embed of the “Hoover Tornado” via Tempest Tours.  Their post reads, “From our photo archives… A classic violent tornado passes just behind the Jordan Unit Prison in Hoover, Texas on June 8, 1995. This tornado was so intense it removed asphalt from area roadways. It formed just as the famous Pampa tornado was diminishing a few miles to the west. Tempest Tours CEO Martin Lisius shot this photo which currently hangs in the warden’s office. “He told me that the prison guards in the towers were very concerned,” Martin said.”

I went on a huge search for damage photos from the Pampa tornado.  They were very difficult to find.  I started reaching out the Pampa community and talked to the wonderful folks at the Pampa News and the Lovett Memorial Library.  The library website has archived copies of the newspapers and through there I was able to clip damage photos and read articles of what happened to this community on June 8, 1995.  Many thanks for your help! 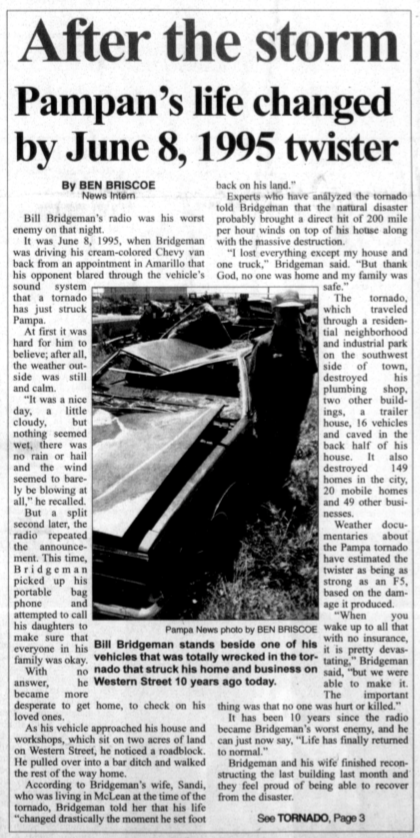 In a Facebook search I found the picture above from an insurance agency.

In my search for photos, I contacted White Deer Land Museum and a wonderful lady named Della Moyer responded.  We started talking and she said she had some damage photos from this event.  She is a photographer and you can check out her business here.

Della shared here experience on June 8, 1995. “I was working at an attorney’s office downtown at the time and I heard the sirens go off.  I walked out back to see where it was and saw a small funnel coming down over the grain elevator.   I told my boss we needed to take staff and clients across the street to the basement at Moses. As we cross the street, I saw the big one, that covered the entire western horizon.  I have a friend who was seriously injured when it hit their business west of town.”

The photos below were taken by Della’s Dad, Lewis Epps.  This is damage to her brother’s buildings on Milliron Road as well as Price Road.

Documentary from TLC.  Pampa footage with damage begins around the 5:50 mark.  This includes interviews and a look at the damage. 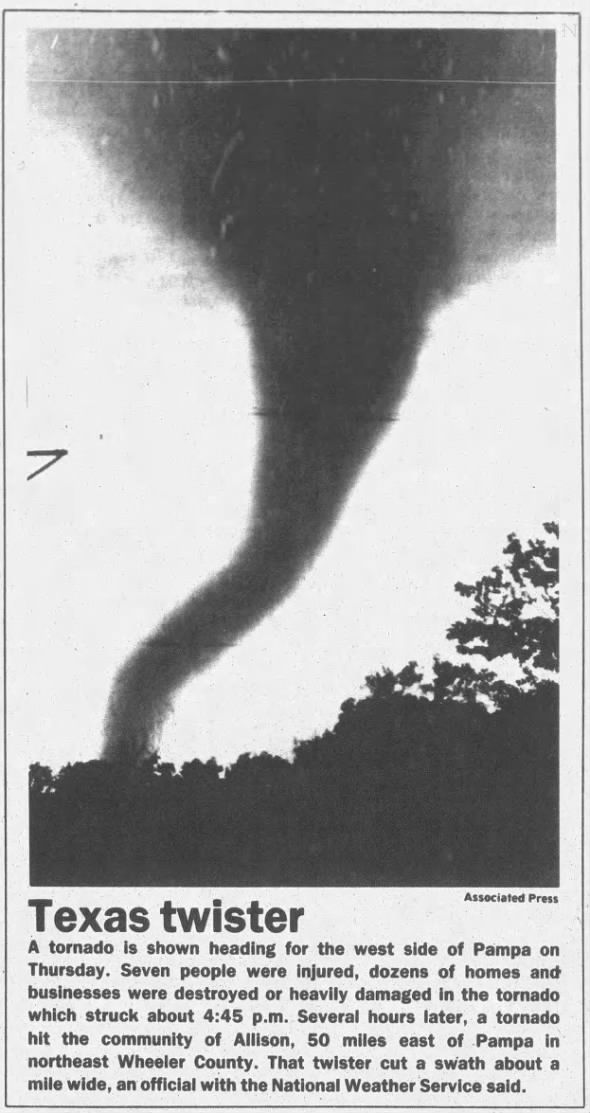 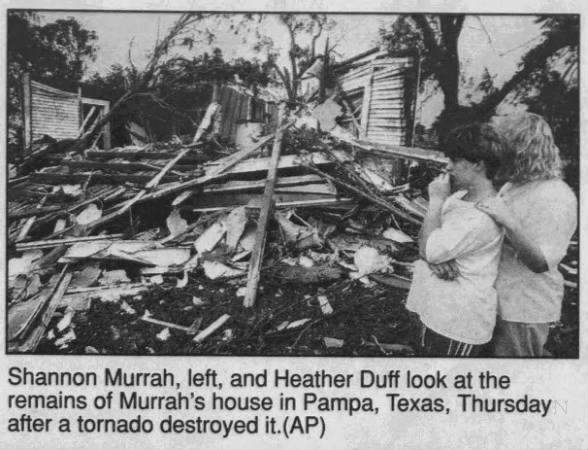 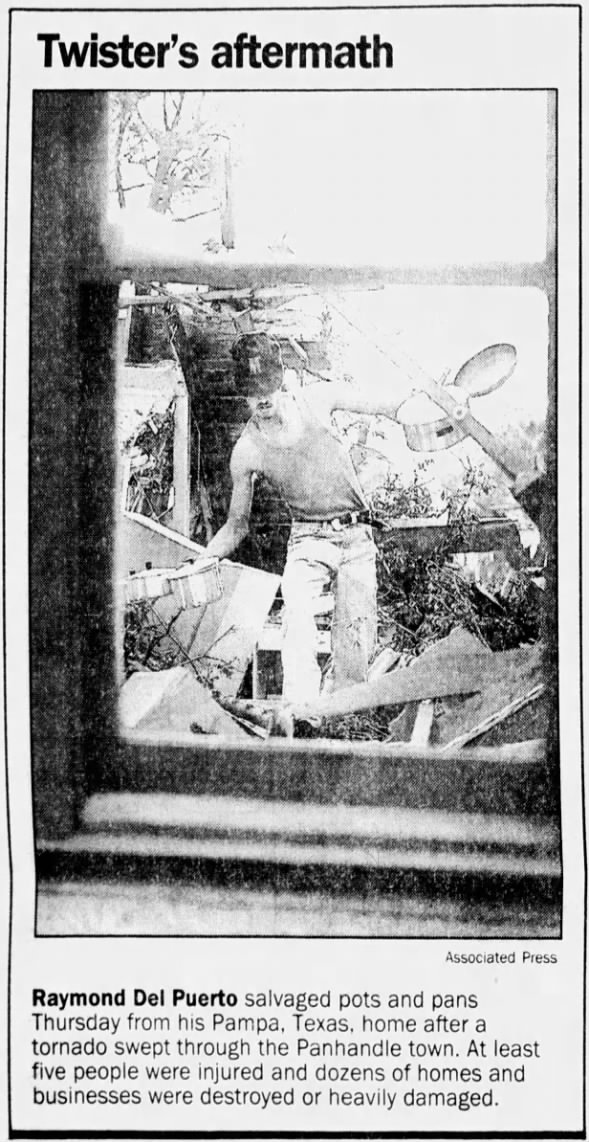 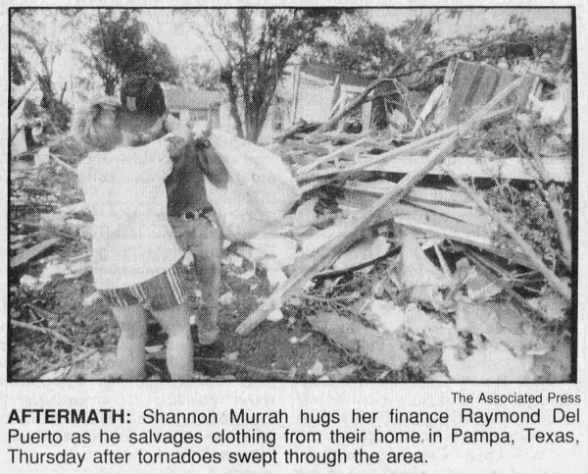