Per the Storm Prediction Center Database, there have been 6 F5/EF5
tornadoes observed since 1950 in the state of Iowa.  The last one hit on May 25, 2008 and is the topic of this summary.

General overview of the tornado track via the NWS Des Moines.  More detailed survey information listed below from a paper written by Tim Marshall.

The official path length is listed as 40.97 miles.  A few other sources though, including Storm Data and the detailed survey from Tim Marshall have a path of 43 miles.

A satellite tornado was observed by storm chasers and an off duty NWS employee south of the main tornado.  It traveled about a mile in Grundy County.

Per the NWS summary in Storm Data:  “At least 627 homes were damaged, including 288 homes destroyed in Parkersburg, 88 in New Hartford, 15 in Hazelton and another 50 in Black Hawk County.  In addition, 58 had major damage, 33 had moderate damage, 2 were inaccessible, and 93 damaged but able to be occupied.  There were also 21 businesses destroyed.  Governor Chet Culver declared both Butler and Black Hawk disaster areas with both given the State Declaration.  A Federal Disaster Declaration occurred two days later for both Butler and Black Hawk Counties.”

An initial survey team was deployed on Monday, May 26 at 10am.  40+ damage indicators were identified during the survey.  In parts of Parkersburg and New Hartford, low end EF5 damage was discovered.  Additional investigations occurred including one led by Tim Marshall.  He presented a paper on how the rating was determined with Karl Jungbluth (NWS Des Moines) and Abigail Baca (Risk Management Solutions).  Per the paper, “Difficulties in rating homes arose since several homes were not anchored and slid off their foundations.  Also, there was significant clean-up of debris within one to two days after the tornado, even in the midst of inclement weather.”

The survey determined that the tornado traveled to the ENE for approximately 70 km (43 miles).  98% of the track was over rural farmland. The remaining 2% was over the south end of Parkersburg.  “Spiral ground marks were observed in many fields where corn stubble had been gathered indicating this was a multi-vortex tornado.  Complex flows were recorded in the corn stubble revealing sudden changes in the tornado’s path and even one loop.”  Additional highlights from this survey.  Note any pictures below come directly from this survey: 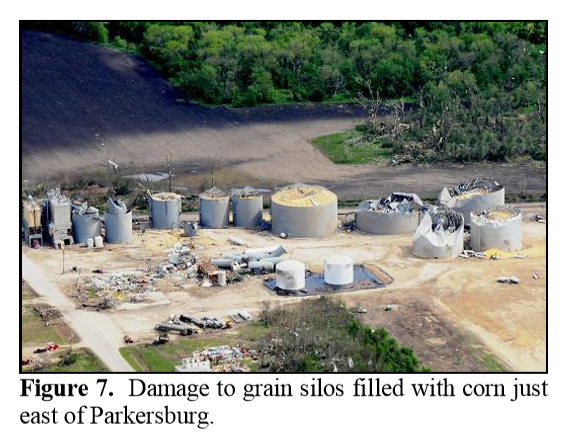 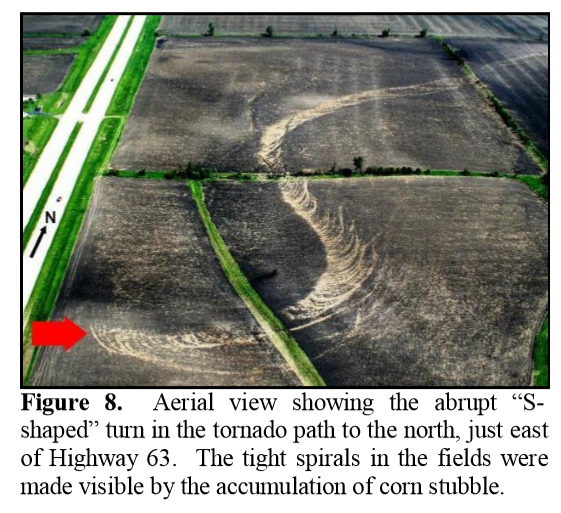 EF-scale numbers were assigned to 440 wood-framed houses, 370 of which were in Parkersburg.  “EF-5 ratings were given to homes that were swept clean above their anchored floor platforms.”  Per the survey, 4% of the homes surveyed were given the EF-5 rating (17 out of 370).  They were mainly in the eastern portion of the damage path. 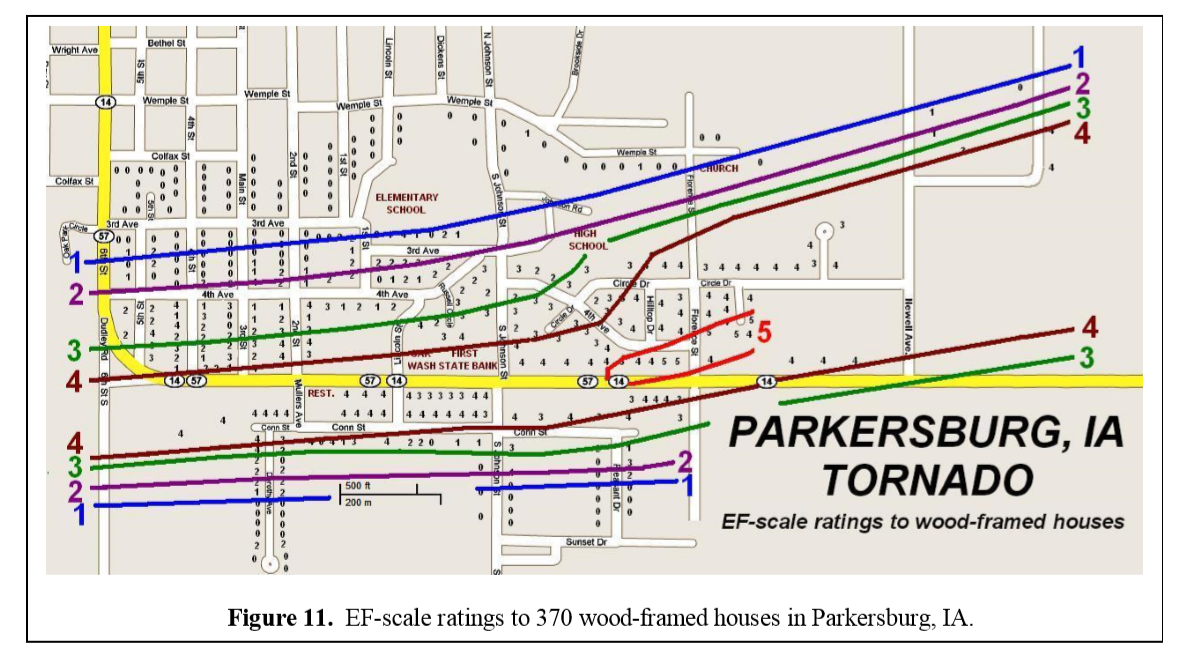 Per the survey, “The fact that homes were swept away did not by itself indicate EF-5 damage.  Consideration was given to the type of foundation and anchorage, as well as the degree of the surrounding damage to homes and trees.”  It was noted that wind rows of fine debris were visible along the center line of the path.  Also, debris impact marks were observed on debarked trees in town.  In rural areas, wet top soil and corn stubble was embedded in buildings, utility poles and barbed wire fences. 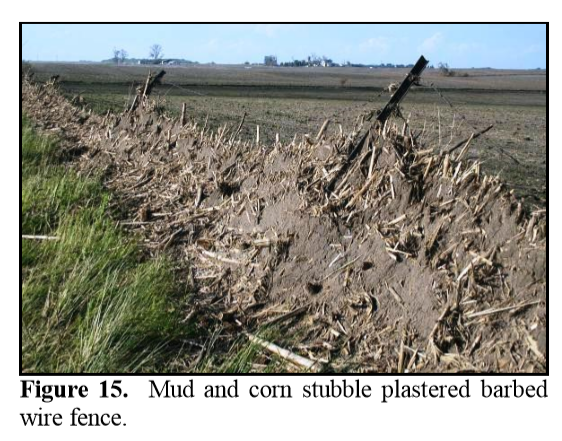 Over 200 vehicles were found to have damage.  50% of the vehicles had not moved but were plastered with debris.  3 vehicles were rolled or lofted.
News reports indicated that a receipt from Parkersburg was found 3 miles north of Prairie Du Chien, WI.  That is over 100 miles NE of the tornado track.  Receipts were also found in Clayton County near Elkader (86 miles from Parkersburg).  Scrapbook pages and photos were found in far northeast Bremer County at Sumner (50+ miles away).

There were 9 confirmed fatalities.  7 were in the Parkersburg area and 2 in New Hartford.  Two deaths occurred a few days after the tornado hit and the last fatality was reported on November 7, six months after the tornado.  Per the NWS, a 61-year-old woman, was injured in the stairwell of her home.  A 2×4 was thrown through her right side lung.  She died of complications from her injuries.

In an article on extremeplanet.me entitled, “The List of the Strongest Tornadoes Ever Record:  Part III”, Parkersburg landed at #11 out of 20.  The town’s mayor is quoted from a 2008 NY Times article.  He states that most of those killed in Parkersburg were in their basements.  “Many of the destroyed homes were swept completely away, floorboards and all, exposing people who had taken shelter underground to the full force of the tornado.” 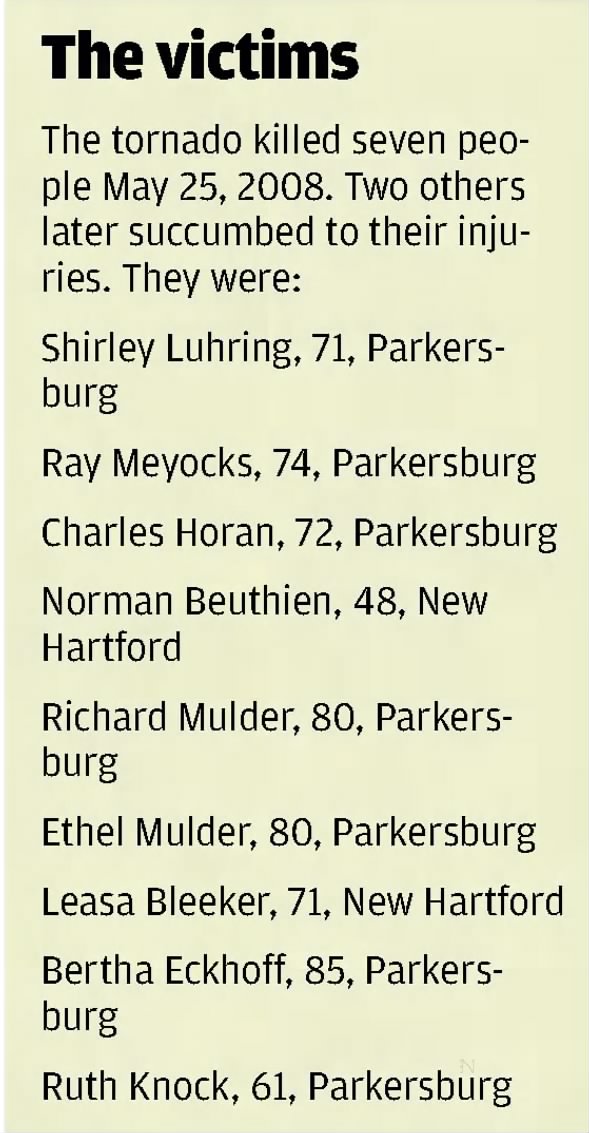 Rebuilding the Town and More Tragedy A Year Later

An article was posted in The Christian Science Monitor on June 7, 2011 entitled, “Parkersburg, Iowa, emerges as model for tornado recovery.”  The story describes how this small town in the middle of the country recovered after a horrific EF-5 tornado.

Within one year after the twister, the destroyed high school had been rebuilt.  This was one of the first goals set by the town’s administrators.  “This decision was important because the community was proud of its football team.”  In it was a basement-level, cement-enclosed wrestling room which would also become a storm shelter for the students and faculty.

Parkersburg had their own volunteer coordinator to handle the influx of college students and nearby residents who came to help with cleanup and the rebuild.  Only a year early, Greensburg, KS  had been struck by an EF-5 tornado. Children from Greensburg sent in pennies they had saved to help the town of Parkersburg.

I discovered in my research that just over a year after the tornado, on June 20, 2009, the beloved coach of the Aplington-Parkersburg football coach, Ed Thomas was murdered.  He was killed by a former football player who was later diagnozed with paranoid schizophrenia.  Horrible tragedy for a town that had already endured so much. 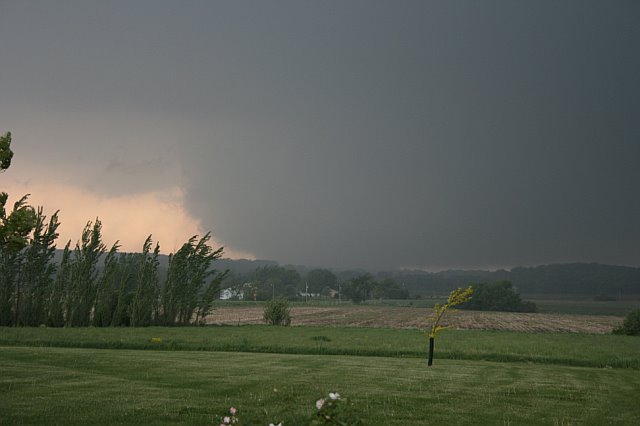 Photos via extremeplanet.me all credited to the NWS 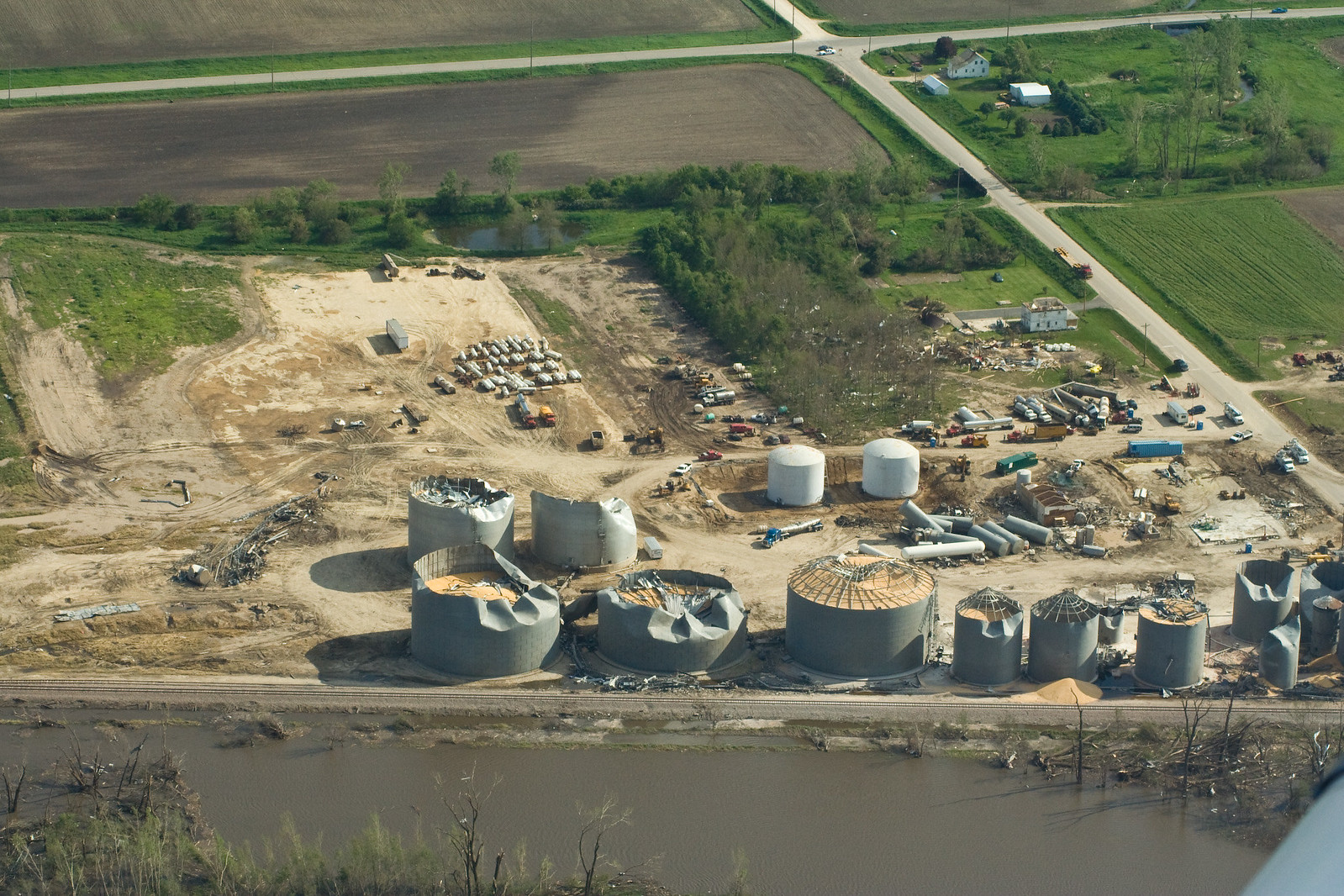 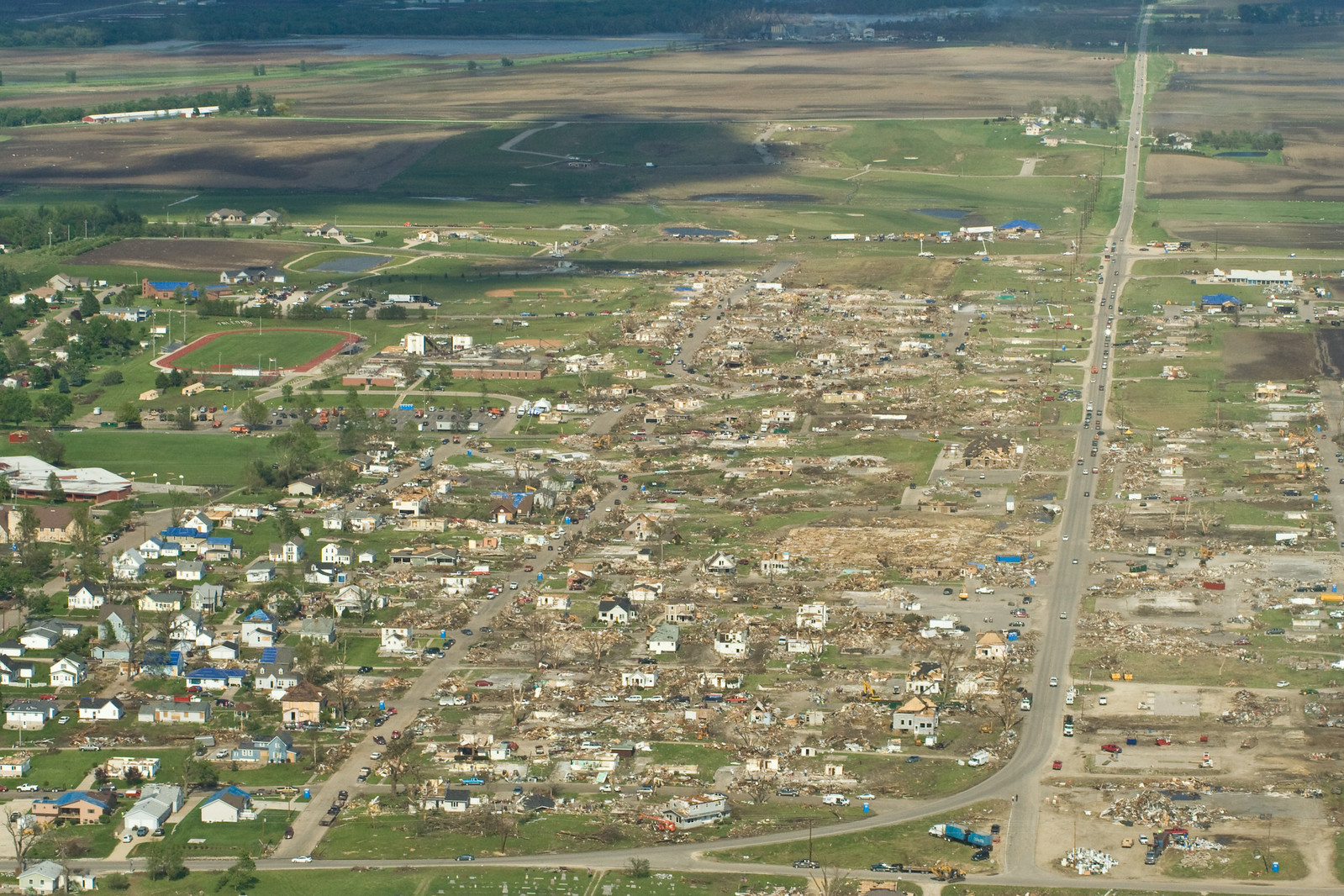 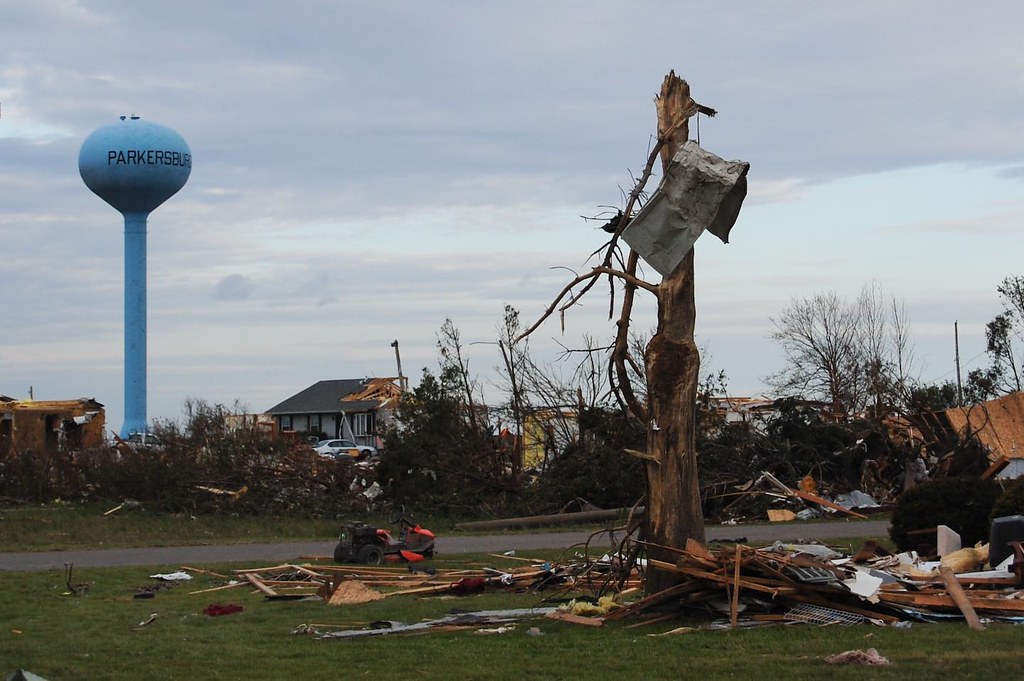 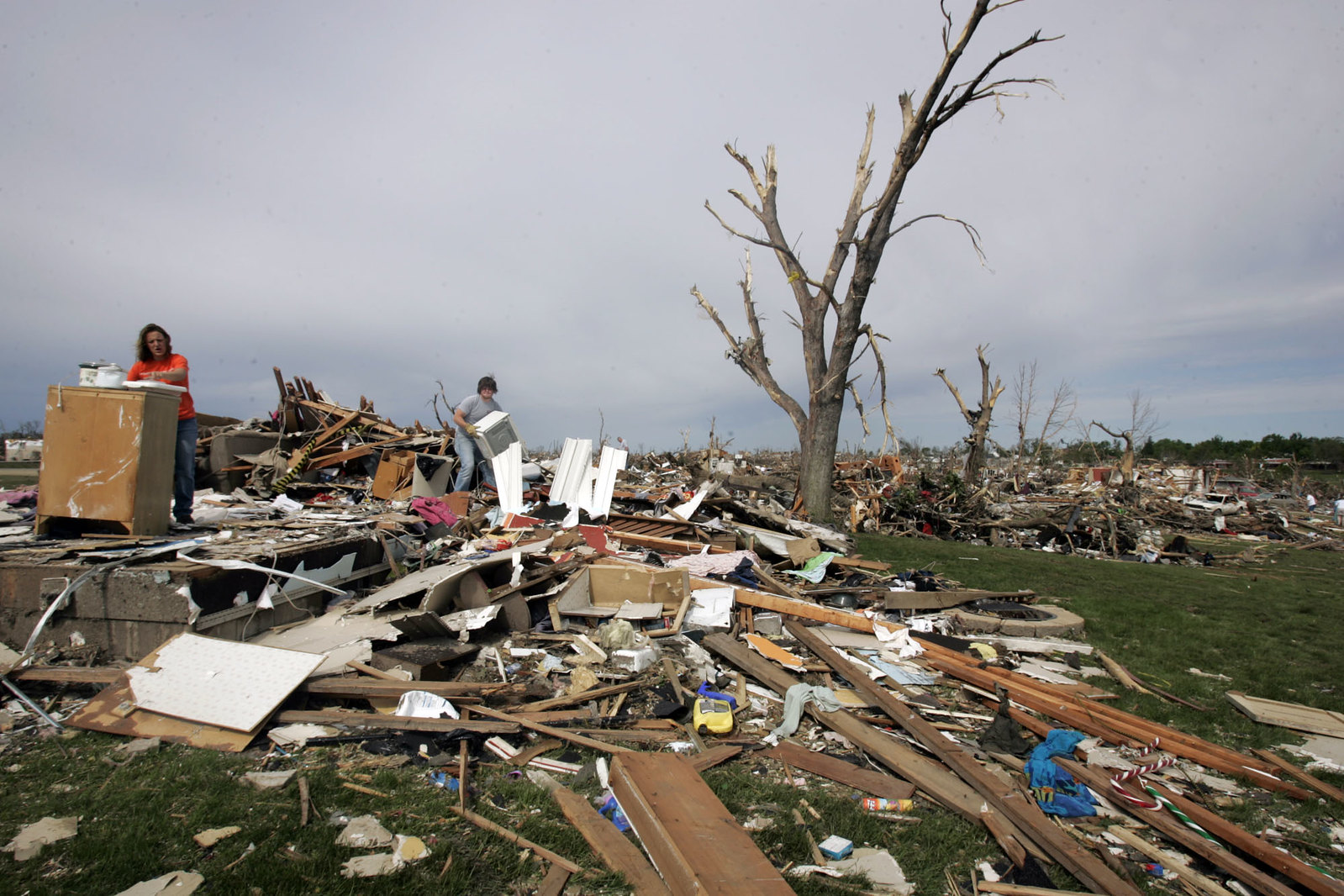 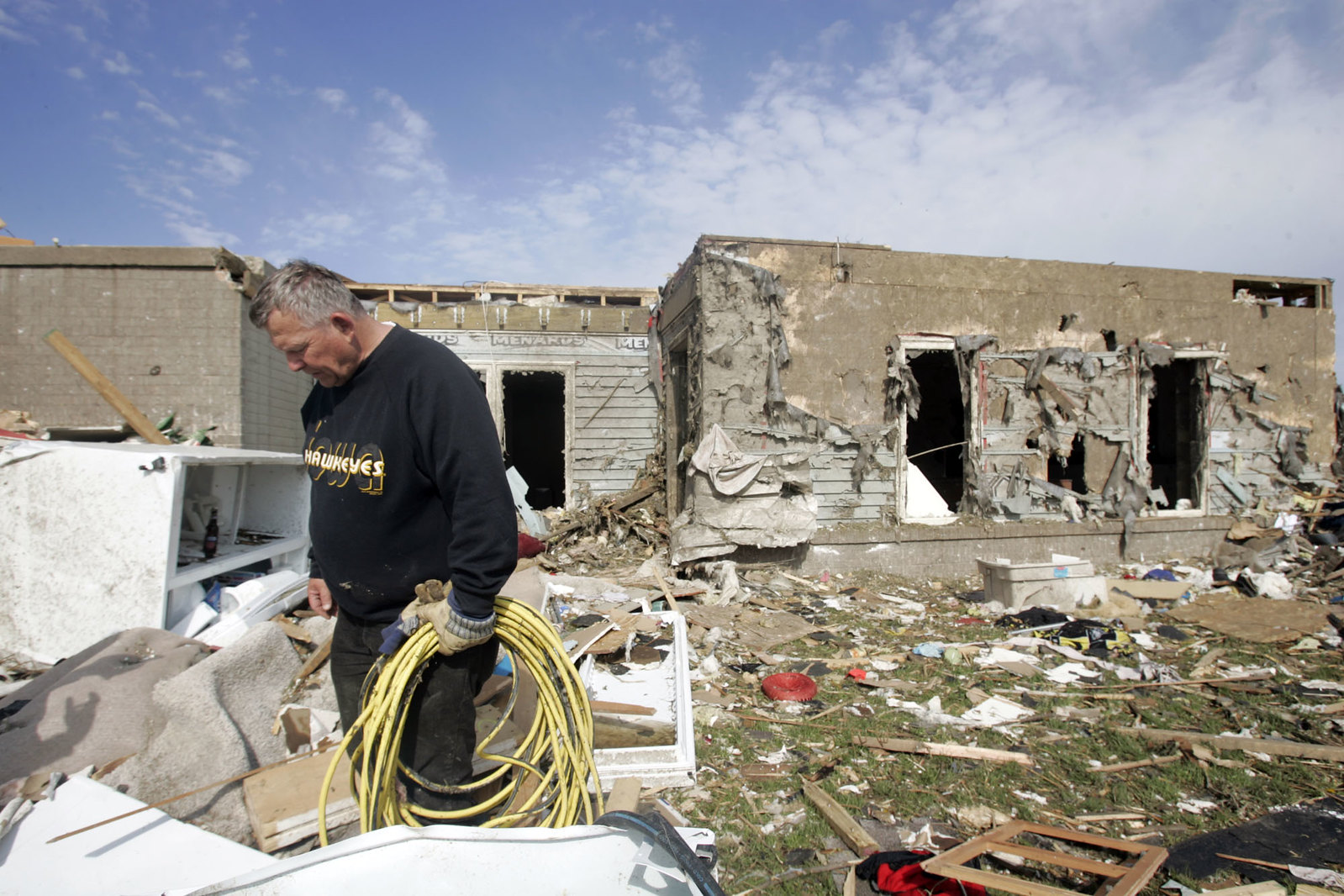 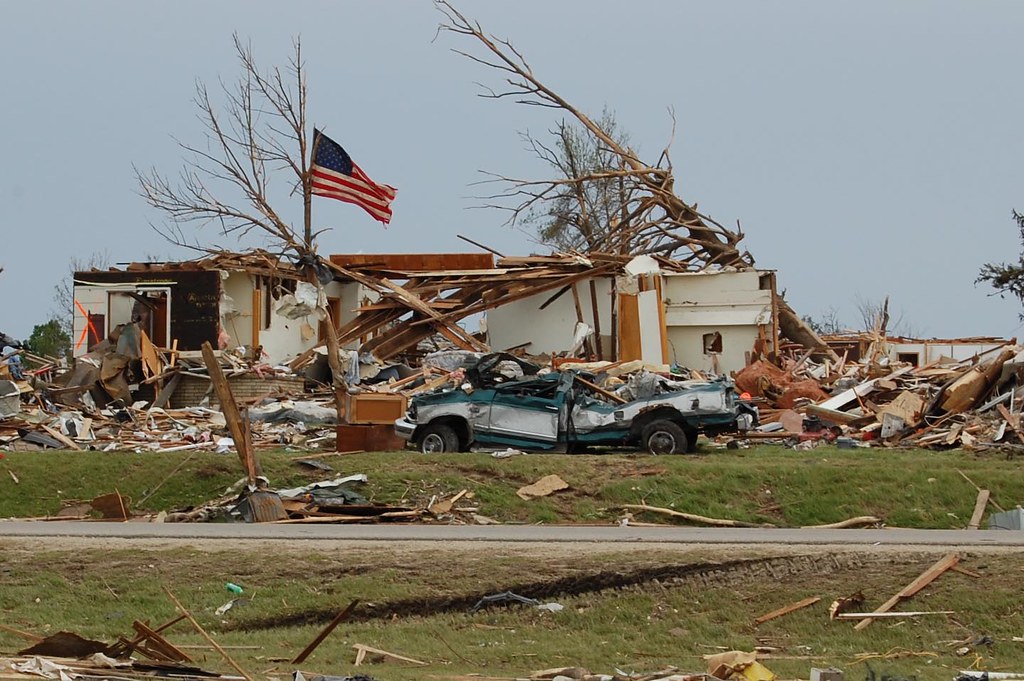 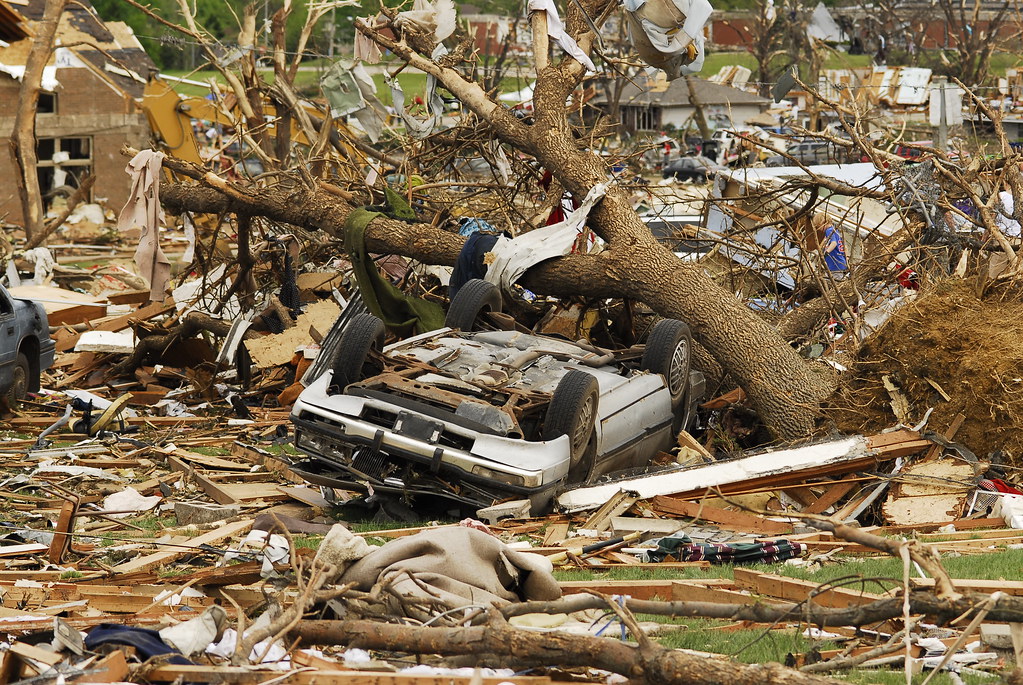 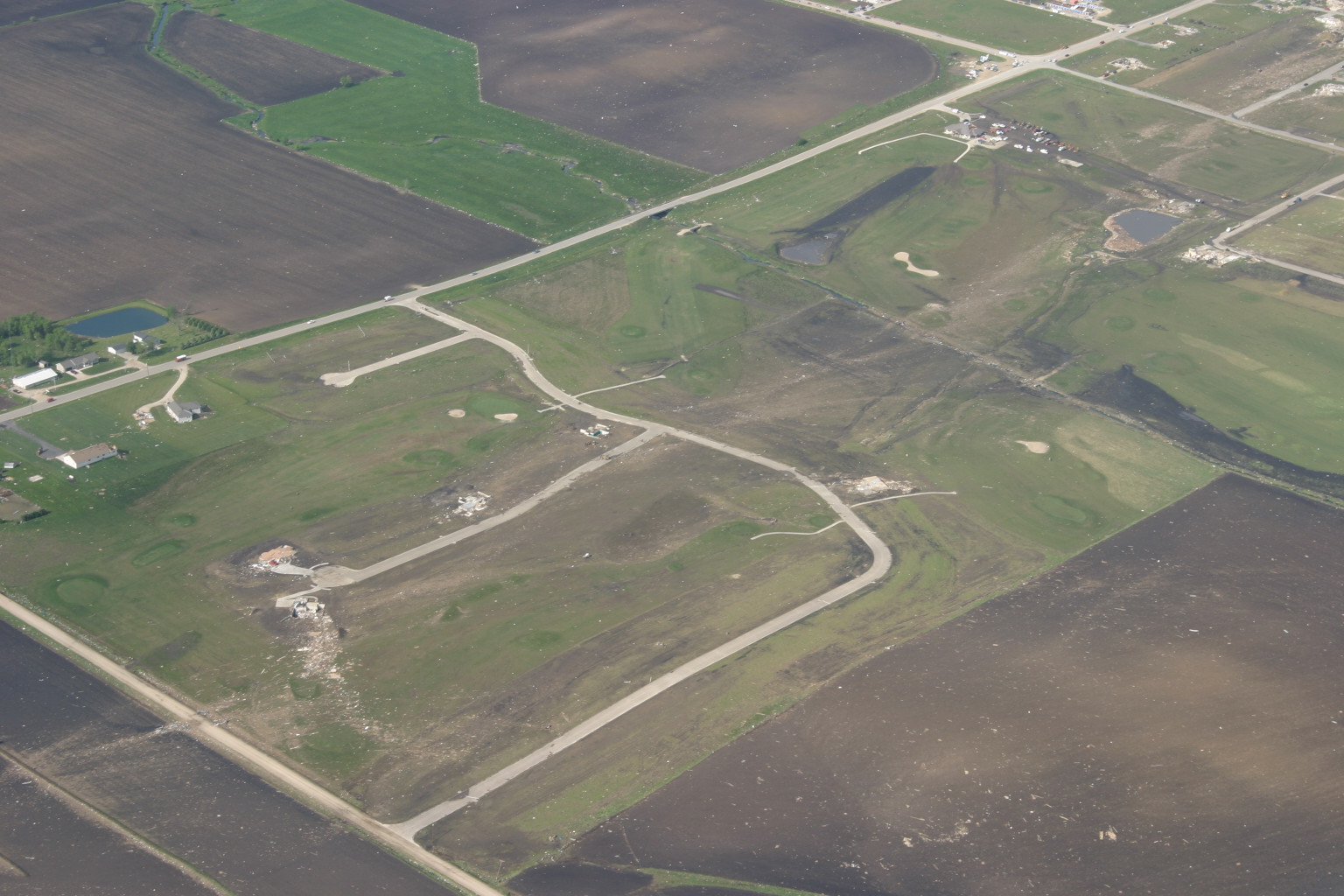 Parkersburg before and after the EF-5 tornado on May 25, 2008 via NWS Des Moines Facebook Page

YouTube embed via rjo232KCRG – An ATM surveillance camera from First State Bank in Parkersburg, Iowa caught this amazing footage of a house being destroyed by the deadly May 25th EF-5 tornado.

YouTube embed via eloisegugenheim.  View of the damage from Kwik Star.

YouTube embed via eloisegugenheim.  View of the damage from the corner of 3rd St and 4th Ave in Parkersburg.

From our partners @IowaHSEMD: On May 25, 2008, an EF-5 tornado ripped across 43 miles of Butler & Black Hawk counties in #Iowa. In this video, Iowa Homeland Security and Emergency Management staff recall the events surrounding the "Parkersburg tornado."https://t.co/xeWASyeRtC

The people of Parkersburg — and all Iowans — can be proud of the town’s recovery and growth since the 2008 tornado that devastated about 1/3 of the community. https://t.co/6o7saufyEI pic.twitter.com/5KTN5MRhXc

"You find out a lot about your character in those moments." Mr. Kerns discussing the impact of the 2008 Parkersburg tornado. pic.twitter.com/y3FQQYom5a 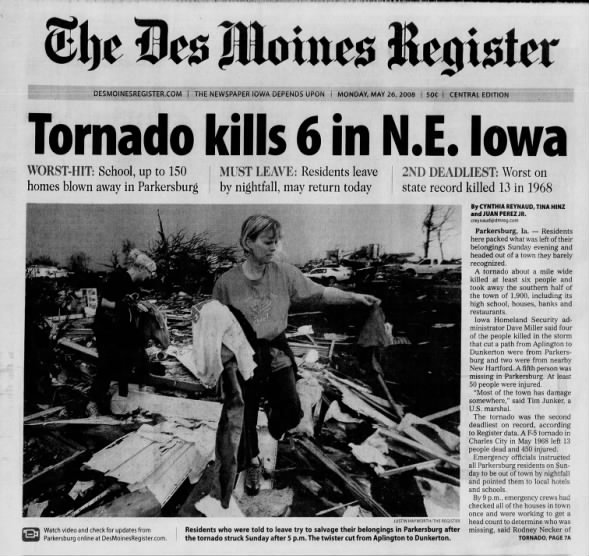 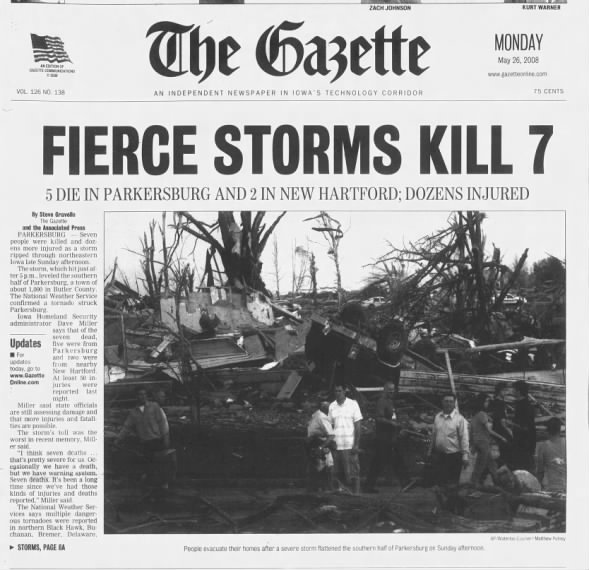 The List of the Strongest Tornadoes Ever Recorded:  Part III via extremeplanet.me