This tornado was one of at least 20 that occurred during the Central Texas Tornado Outbreak of May 27, 1997.  This is the same outbreak that produced the Jarrell F5.  This tornado traveled 5.6 miles in a general westerly direction through the Pedernales Valley area in Travis County.  There was one fatality.  A 25-year-old male died when he was either blown from his mobile home or from his pickup truck as he attempted to flee the storm.  The first tornado of the outbreak occurred SW of Waco.  The Pedernales Valley Tornado developed 80 miles south-southwest of that area.

The Pedernales Valley tornado began on the shore of Lake Travis destroying trees and a floating marina where nearly all of the watercraft were destroyed. While numerous trees were twisted and uprooted in this area, several structures sustained only what appeared to be minor damage that would be no more than F0. The tornado was initially moving westward as it moved into rough terrain. A number of structures sustained varying damage until the tornado reached Bee Creek Road. At that location, a Southwest Bell building housing telephone switching equipment was destroyed. The building was well constructed and was one of several buildings which indicated at F4 rating for this tornado. Bee Creek Road takes a bend close to the telephone building and across the street a house was destroyed with walls knocked down.

Approximately 2.2 miles from the lake, the tornado path takes a distinct dog leg turn toward the southwest. The point at which this dog-leg turn occurred also corresponds with a knoll. Trees and buildings at the top of the knoll were destroyed. After the dog-leg turn, the tornado assumed a heading of 250 degrees and crossed a major power distribution line. One steel tower was destroyed bringing all lines to the ground. The tornado remained on the 250 degree heading moving through the area described as the Hazy Hills subdivision. Numerous houses and several mobile homes were totally destroyed. Several houses survived but sustained major damage making them totally uninhabitable.

The only death associated with this tornado occurred here when one man was killed. He lived in a mobile home that was demolished and his vehicle was tossed several hundred feet. Other survey team members were unable to learn whether he was in the mobile home or had left it to drive away.

The tornado continued west-southwest moving across State Road (SR) 71. A number of well built homes in the Hazy Hills subdivision were heavily damaged or destroyed. Crossing SR 71, the tornado moved into another subdivision with widely separated houses in the Lick Creek valley, a steep walled creek that feeds into the Pedernales River. One stone-walled house located just north of Pedernales Drive and west of SR 71 was completely deroofed. Other structures in this subdivision sustained roof damage in the F2 range. After following the terrain into the creek it climbed another rise in the land before ending shortly after passing the crest of the small hill. As the tornado ended, damage was minimal to trees.

This is what is plotted on our map above and matches with the Storm Data Narrative of the track and matches more closely with the map included in the NWS Assessment which is shown below. 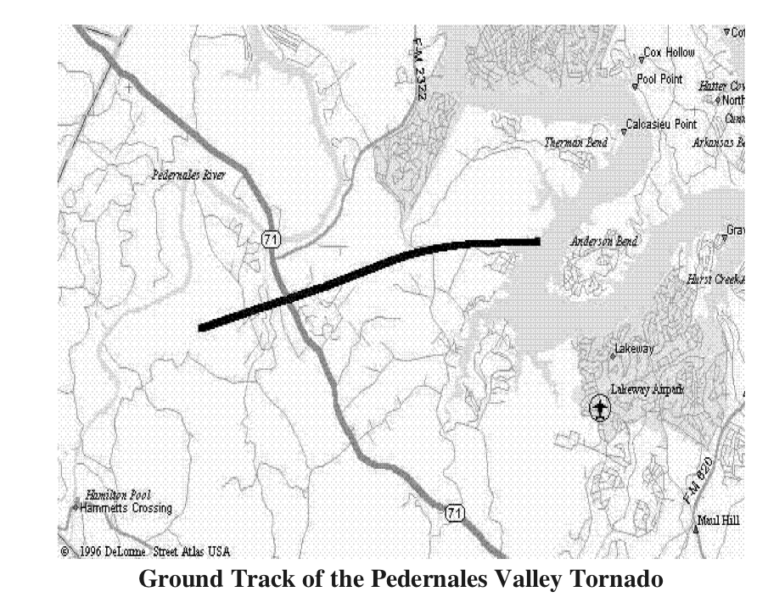 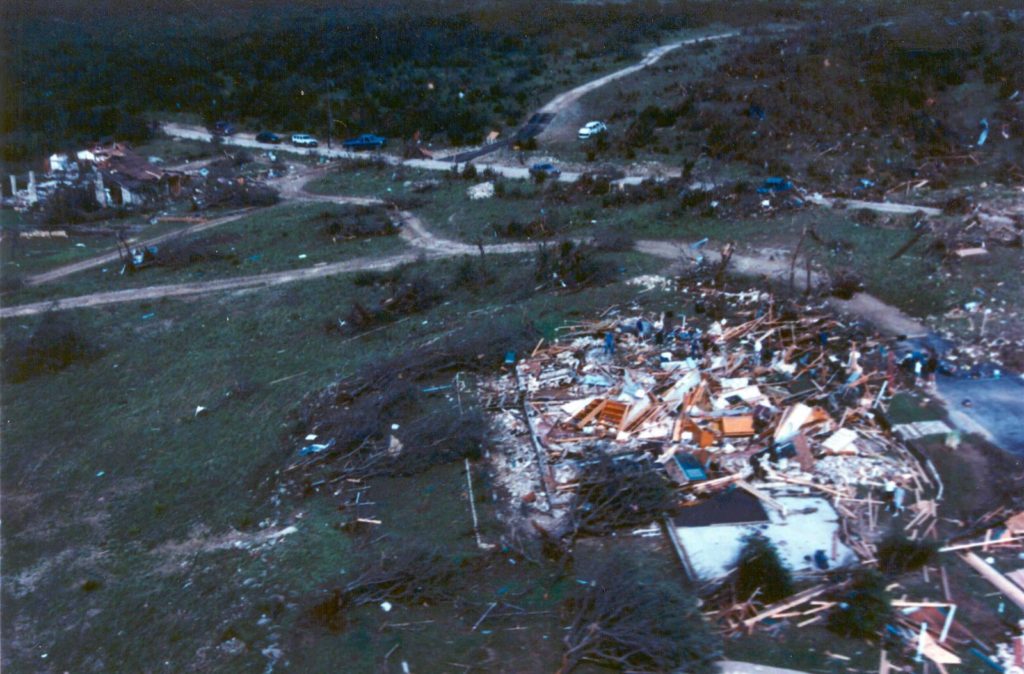 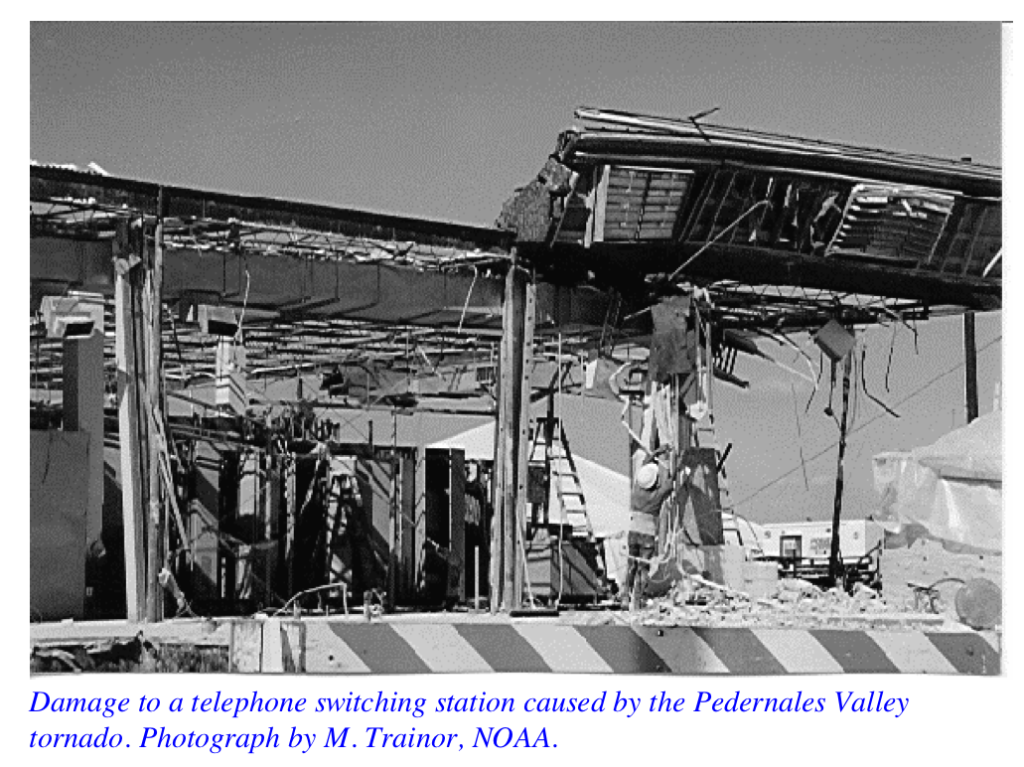 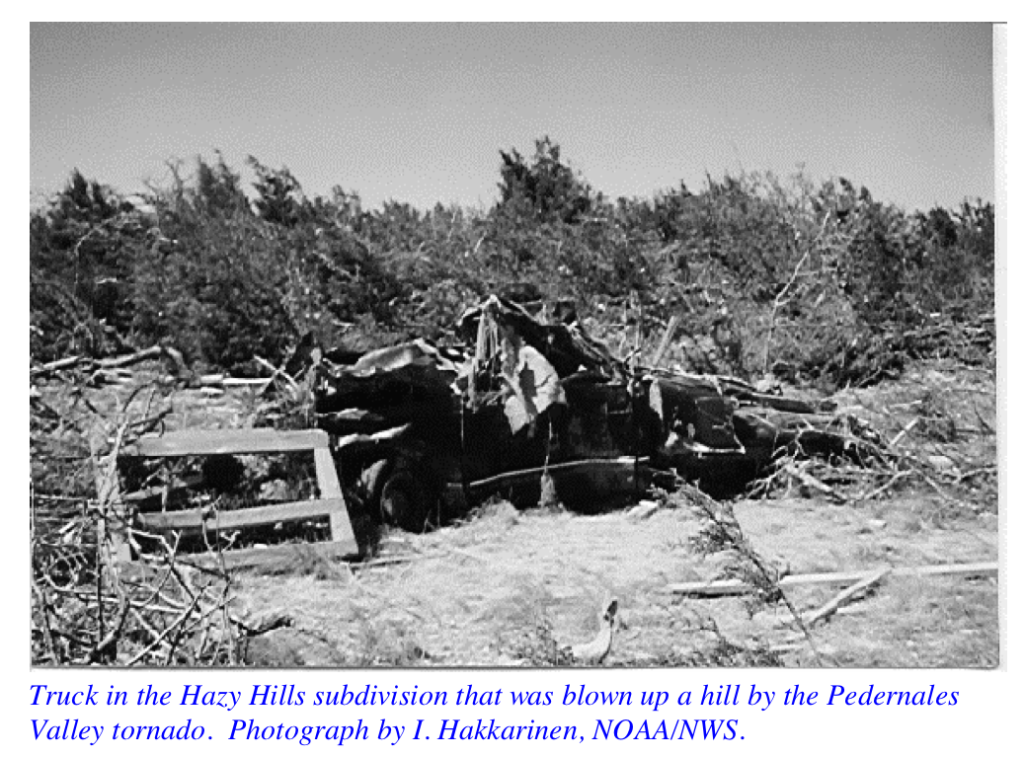 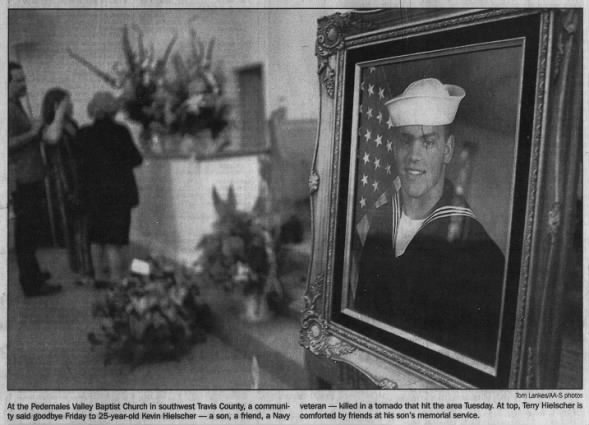