On May 22, 1949, at least 7 tornadoes touched down in Pennsylvania.  I had originally assigned an F1 rating to four of them and an F2 rating to three of them.  Thomas Grazulis only has two of the tornadoes listed in Significant Tornadoes 1680-1989. One of them is the Harrisburg-Hummelstown tornado which I originally assigned an F1 rating.  I have since changed this in my database to an F2.   The other F2 he has listed is the Clayton-Coopersburg tornado.  I split this tornado into two tornadoes after doing further research. Also, after doing research, the only tornado to still attain the F1 rating I originally assigned is the Zelienople Tornado.  The other 6 tornadoes now have an F2 rating.  Keep in mind ratings are subjective, and these may not be entirely accurate.

The first tornado touched down around 4:30 west of New Brighton in Beaver County and for the next half hour, tracked northeast through Zelienople, and Harmony.  Many trees and power lines were knocked down.  And homes had some window and roof damage.  Several garages were knocked over and sheds were destroyed.  A greenhouse had 6,000 window panes knocked out, and the roof of an orphanage was ripped off.  The garage at the orphanage had the doors blown off.  A barn was destroyed, killing a cow, and a dog inside the barn was blown through the air. 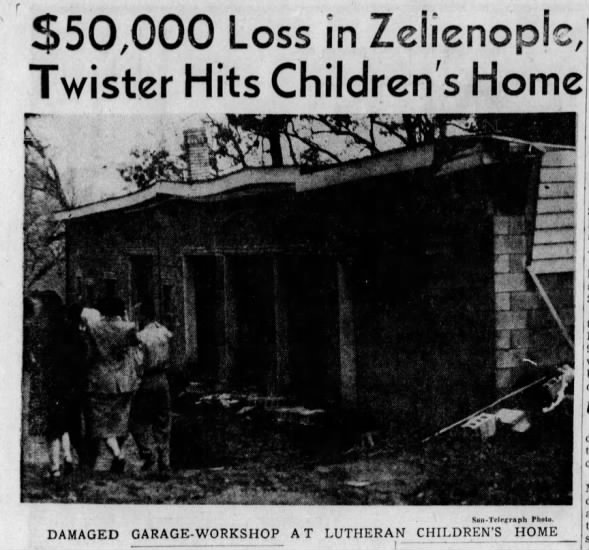 What was likely a family of tornadoes cut a swath of sporadic damage from Johnstown to Altoona. The Pennsylvania Climatology Data report for May 1949 states, “at least one tornado was responsible for the damage, and 6 people were injured”.  Information for the Cambria County segment was hard to find.  However, extensive tree damage occurred just east of Johnstown, and trees were shredded along Route 219.  Power-lines were downed too, a man was killed after trying to move a downed power-line near Johnstown.  This death should be considered an indirect death as it did not occur during the tornado.  Three people in one car were injured by a falling tree.  A large barn near Beaverdale was flattened, and two sheep inside were killed (F2 damage?).

This tornado then ripped down the Carson Valley, where it toppled hundreds if not thousands of trees and it moved toward Altoona (low-end F2 damage, several tornadoes in Pennsylvania, have been rated EF-2 for this reason which is why I changed my original rating from F1 to F2).  Falling trees blocked what is now Old Route 22 west of Duncansville which caused about 100 cars to be stranded.  The 100-yard-wide tornado ripped a path of destruction through the southern part of Altoona.  At the Intersection of Sugar Run Road and Broad Ave Extension, homes had large sections of roofs torn off, garages and other outbuildings were twisted or destroyed. Large trees some 4 feet in diameter were “twisted” apart or uprooted.  The tornado hit the Eldorado section of town, downing many trees and power lines, and damaged shingles and windows.  A restaurant on 58th street had its brand-new neon sign blown away and a large billboard next door was pushed to the ground.  Several homes sustained damaged from falling trees/branches.  The tornado then roared into Highland Park uprooting large trees and causing damage to maintenance buildings and pavilions in the park. In the Llyswen section, large trees were downed, and shingles were torn off houses.  Fallen trees disrupted trolley service.  Then it “roared up” over brush mountain where it lifted after downing trees along Kettle Road.

It is possible that the damage to farms near Boswell, in Somerset County, was caused by this tornado, but I could not confirm that. 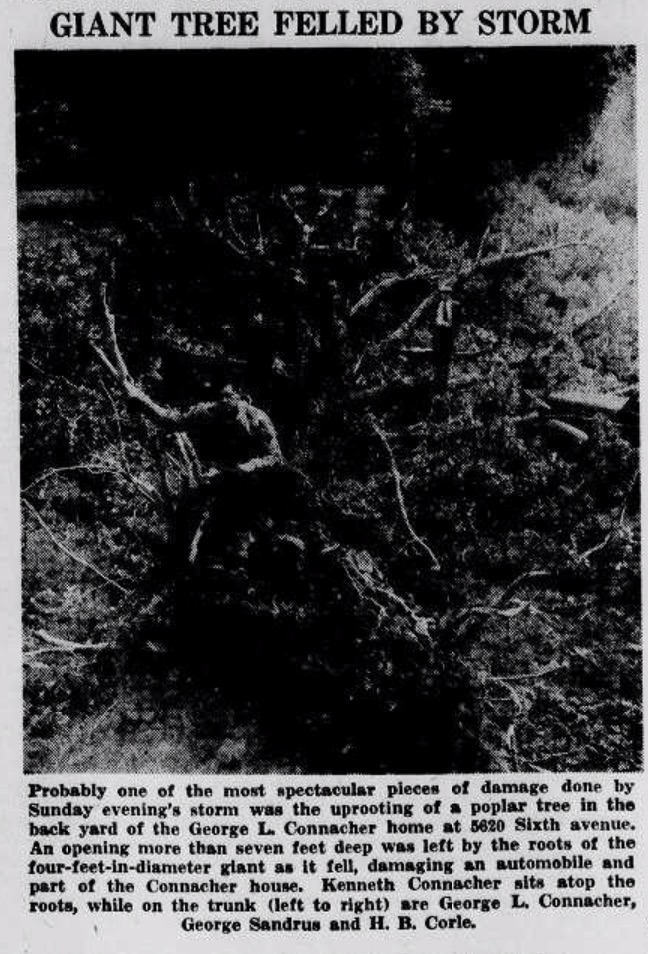 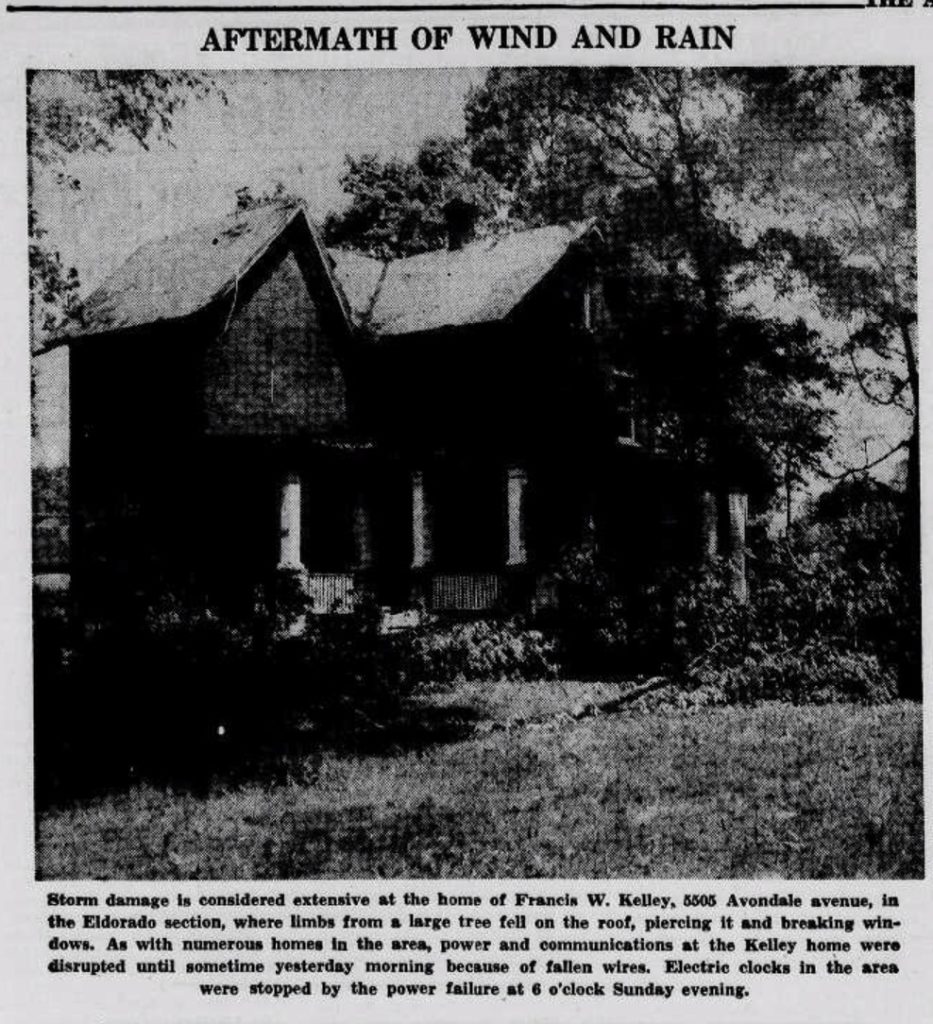 A 500-foot wide tornado passed “diagonally” through Imler.  Most of the trees in the tornado’s path were “twisted” out of the ground according to eyewitnesses.  A truck was crushed under a falling barn.  Roofs were torn from barns and outbuildings and several homes damaged too, with broken windows and roof damage.  At the Claycomb Farm, the large barn was “raised from its foundation, twisted by tornadic winds then dropped to ground completely razed.”  A chicken coop in front of the barn was crushed and only a few of the 200 chickens survived.  A brooding house at the rear of the barn containing 300 peeps was shredded, and a smokehouse was leveled, and its contents scattered.  Nearby at the Kaufman Farm, the barn roof was torn off and several large trees uprooted.  Damage was caused to the Kaufman’s home, breaking windows and “twisting” several interior doors.  An Apple orchard was destroyed, too.

This tornado was not reported in the Monthly Weather Review or the Climatology Data Report, but it was confirmed by the Altoona Mirror. 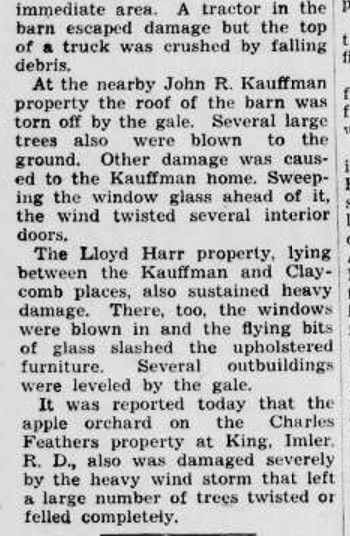 “Two freak wind and rain storms which converged upon the Fredericksburg and Henrietta areas yesterday afternoon caused widespread damage to large barns, woodlots, churches, and homes, and at least one person was known to have been injured” the Altoona Mirror reported. The “baby twister” moved through Henrietta and Millerstown before dissipating near Clover Creek (Fredericksburg), east of Martinsburg. A 70-foot by 40-foot barn at the Robeson Farm was heavily damaged. Timbers were found a quarter of a mile away. Mrs. Robeson had just returned to the porch of her home from the barn where she had just finished milking the cows when the funnel struck. Three cows were struck by flying timbers and injured, and a large timber from the barn went through the roof a hog pen, fatally injuring a pig. At the Kensinger Farm, a 150-year old stone and frame barn was heavily damaged, with timbers piercing the house, chicken coop, pig pen, and wagon shed, timbers were also blown onto a neighboring farm.

Several other barns were heavily damaged or entirely destroyed. Numerous Trees were snapped and uprooted. A 100-foot chicken house was leveled killing many chickens, though many of the eggs inside were unharmed. Another chicken house was swept away. A car was damaged when the barn it was in collapsed.  Dozens of homes had varying degrees of damage ranging from broken windows to being unroofed. A 17-year-old girl in Henrietta was injured when the window she was standing at shattered. At one house a porch swing that was blown through a window. At Millerstown, the Mount Pleasant Evangelical and Reformed Church was heavily damaged when the chimney collapsed and windows shattered, allowing rain to get in and cause water damage.  The tornado then downed several willow trees in the Clover Creek area before dissipating. It was said to be the most destructive storm to strike the area since 1925.

This tornado may have been the same tornado that struck Imler, though since that can’t be confirmed, it will have to be listed as a separate tornado. 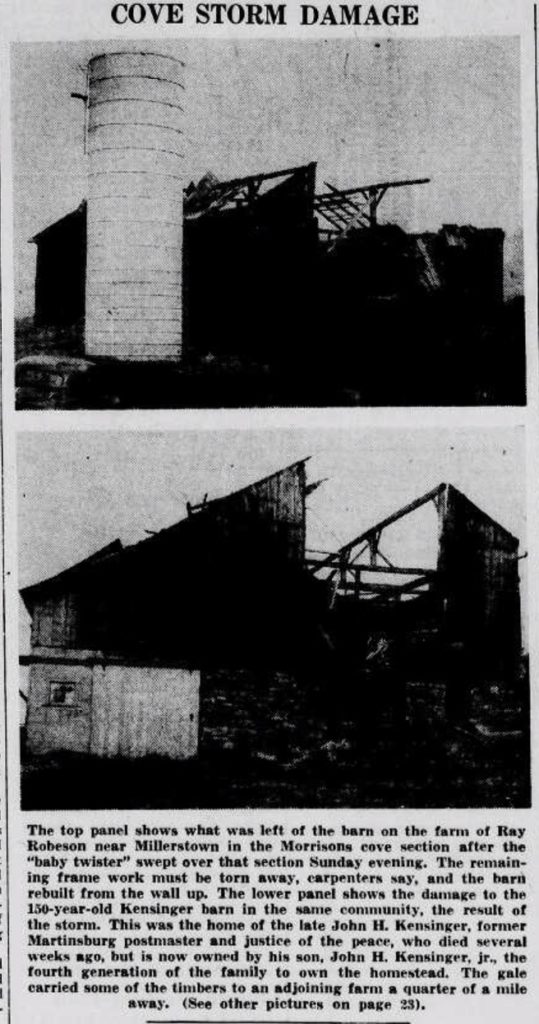 Per the Climatology Data Report “at least one small twister moved west to the east shortly after dark”.  Strong winds blew down many big trees in River Park, completely blocking Front Street for 15-20 blocks.  At least one house was completely unroofed, felling several light poles, and sideswiping other homes.  Several cars damaged by trees falling on them. Signs and small stands damaged store windows.  Fallen power lines resulted in several spot fires, causing limited property damage.  Near Hummelstown side of stone house blown out.  Several barns unroofed.  A partially finished home demolished and another new home blown down. The roof of a grocery store was blown through the air about 75 feet damaging a home.  I was unable to access newspapers from the Harrisburg/Lebanon area to get more information on this tornado. 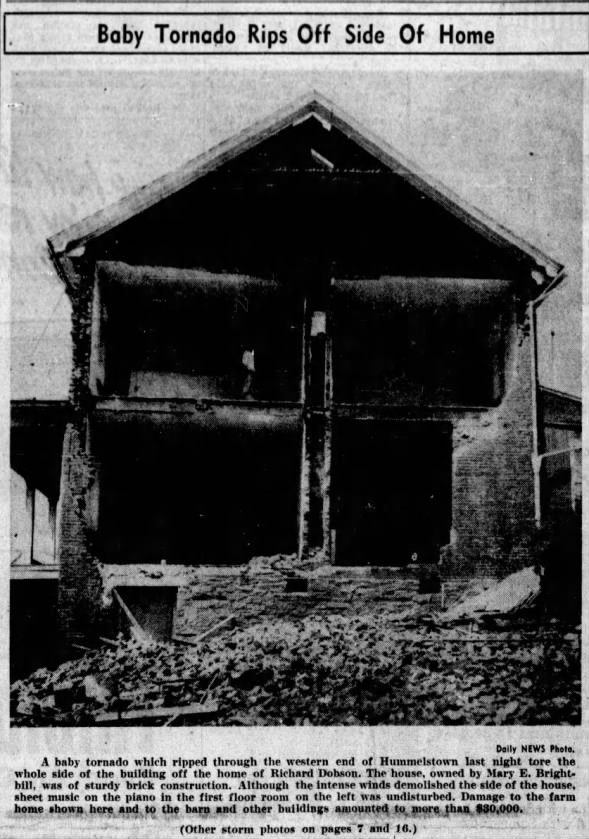 Touched down along Route 100 north of Bally tracked northeast through Clayton lifting before it reached Hereford.  A large, well-built two and a half story stone barn at the Meitzler farm, the largest barn in the area was demolished.  Mr. and Mrs. Meitzler were struck and injured by the flying timbers.  The Meitzler home was unroofed and had windows blown out.  A tv aerial was blown down, and three 75-foot-tall trees in the front of the home were toppled.  The land around the farm was littered with debris.  The East Greenville Hosiery factory was nearly leveled by the tornado.  The north and south walls were blown out, as was the roof, inside three hosiery knitting machines were badly damaged, and a large stock of unfished yarn was scattered through the remains of the building and outside in the fields.  As the tornado continued northeastward, it snapped and uprooted numerous trees and unroofed several homes.  The Clayton Garage on Route 100 was unroofed.  A shed was demolished and scattered across Route 100 and a field, some of the garden tools inside disappeared. 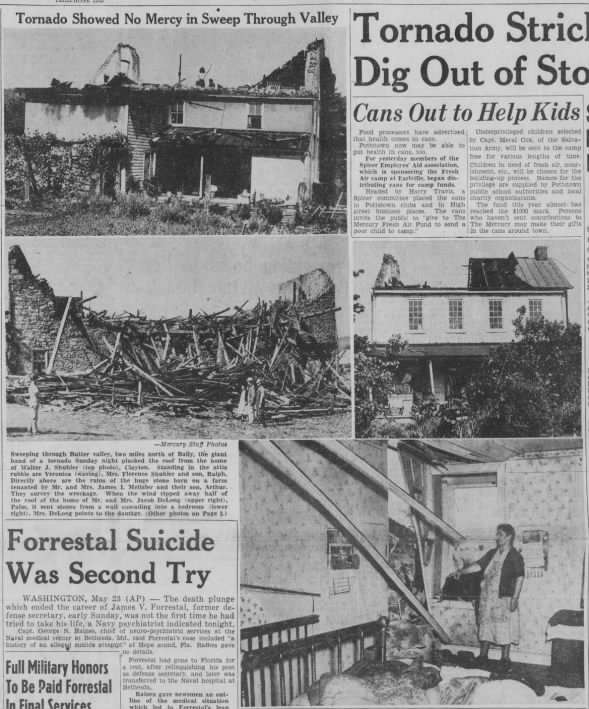 A tornado moved from Palm to near Hosensack to Coopersville, several barns were leveled as were chicken houses. A large stone house was unroofed and had several walls cracked near Palm, and falling trees blocked Route 29.  Several other homes along the path were damaged or unroofed.  5 people were injured when a large 3 story apartment was unroofed.  Five chicken homes were demolished near Hosensack, and two people were injured.  Near Coopersville, a garage was destroyed.  Numerous trees and powerlines were downed along the path. 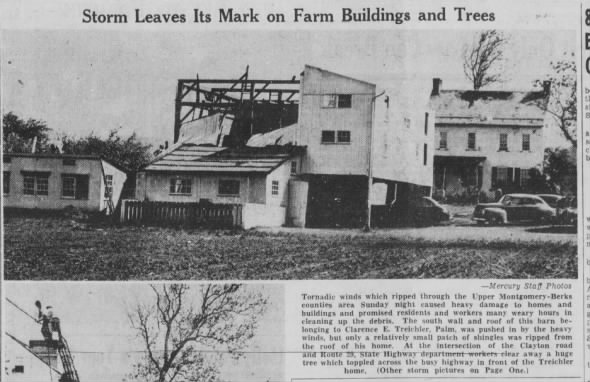 The Altoona Mirror – May 23, 1949 from newspapersarchive.com

The Pennsylvania Climatology Data Report from May 1949