August 6, 1993, was one for the record books in the state of Virginia. 18 tornadoes occurred on that day alone, smashing the old record of ten in one day on October 13, 1983. This record held for 11 years until September 17, 2004, when Hurricane Frances spawned 39 tornadoes. The focus of this summary is on the strongest tornado of the outbreak, an F4 that hit the town of Petersburg with estimated winds peaking near 210 mph. This is the most intense tornado in Virginia since 1950. The twister caused an estimated $47.5 million in damage. This was not only the costliest of the day but the costliest in the history of Virginia. The total estimated damage from this day was $52.5 million. There is no dispute on the strength of this tornado, but there is a dispute on where the F4 damage occurred.

The tornado formed at around 1:30 PM EDT about 4.3 miles southwest of downtown Petersburg, Virginia. The multi-vortex tornado grew rapidly and damaged many homes before it plowed into historic Old Towne Petersburg. Details are limited on the extent of the damage before the tornado reached Old Towne. The Old Towne commercial district was established in the 17th century and most of the buildings dated back to the mid-1800s. Virginia’s oldest standing train station was also located here. A tornado warning was issued at 1:35 PM EDT, five minutes after the tornado had already formed and damage was already occurring.

The NWS believed that the tornado reached its peak intensity of F4 in the Old Towne area. Several large well-constructed brick buildings were collapsed and destroyed, with others being heavily damaged. The end unit of a row of three-story brick buildings was completely destroyed, with only the part of the first floor walls remaining in place. In another row of three-story brick buildings, the middle unit was leveled. The historic train station was completely destroyed. Near the train station, a caboose that was anchored to the ground and resting on a set of railroad tracks was torn from its anchors. It was thrown about 20 feet to the southwest, ripping the tracks out of the ground with it. A nearby restaurant that had a solid brick wall (four bricks thick) with no windows had a large hole about 2-3 feet in diameter knocked through it. Another building in the area that was constructed with reinforced cinderblocks and a brick exterior was also destroyed. A total of 58 buildings in Old Towne Petersburg were damaged or destroyed.

After devastating Pocahontas Island, the tornado crossed the Appomattox River, and Interstate 95, into Colonial Heights. It tore through the Southpark shopping area. A K-Mart and the Southgate Square Strip Mall were among the stores that sustained heavy damage. These stores had roof and wall failures. Walls of the businesses that were still standing were splattered with debris. The tornado then hit a Walmart. It was about as wide as the Walmart was long. A narrow suction vortex struck the store carving a 20-yard wide swath through it. The survey determined that this suction vortex had winds up to 175 mph (F3 on the Fujita Scale). It was here, at the Walmart, where the tornado tragically killed three women and injured 198 people. Two of the women, Cheryl Diane Weisheim and Carolyn Gunn, were Wal-Mart employees. The other woman, Mae Prosise, was a customer. Most of the injuries in the store were minor, though several people had broken necks and head trauma due to the falling/flying debris. 500 cars in the Wal-Mart and Southgate Square parking lots were tossed about and destroyed or damaged. In this area of Colonial Heights, the damage was estimated at nearly $30,000,000.

The twister crossed the Appomattox River, again, moving into Prince George County. It hit the Tarmac Virginia, Inc. which is a sand and gravel pit company on Puddledock Road. F2 damage occurred here. The second floor of a cinder block building where several employees took cover was destroyed. A man, Morris Gupton Jr, was crushed and killed between cinder blocks. It also twisted large conveyor belts and overturned several cars and trucks at the gravel company. The tornado continued northeast across Interstate 295 where it damaged a tall brick barrier as it moved into the northern part of Hopewell. Here, it caused minor damage to 49 homes, heavily damaged 13 others, and destroyed two homes. It damaged the roofs to several units at the Riverside Park Apartment Complex. Eight people were injured in Hopewell. The tornado dissipated near the confluence of the Appomattox and James Rivers.

This was the first F4 tornado recorded in the state of Virginia. At the time of writing this summary, only one other F4 tornado has occurred in Virginia. On September 24, 2001, this tornado hit Rixeyville, injuring two people. According to Grazulis, the Petersburg tornado alone injured as many people as all other Virginia tornadoes combined from 1880-1993. This wasn’t the only destructive tornado to affect Petersburg. On May 8, 1984, an F3 tornado moved through downtown. 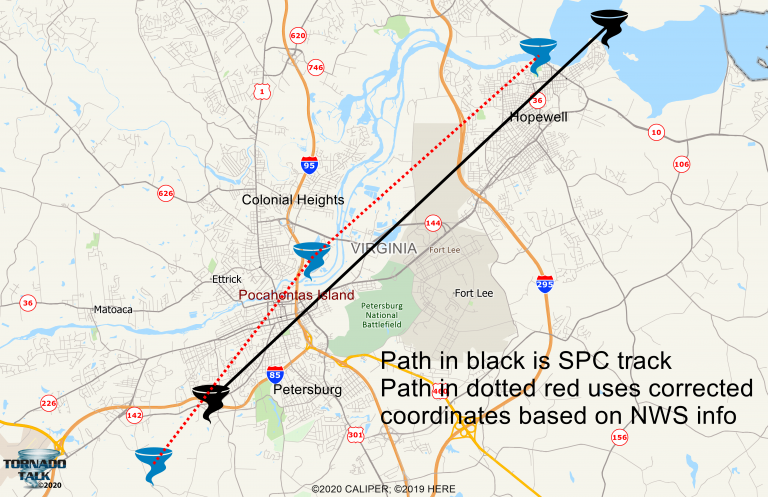 Corrected Coordinates: From the NWS Summary. 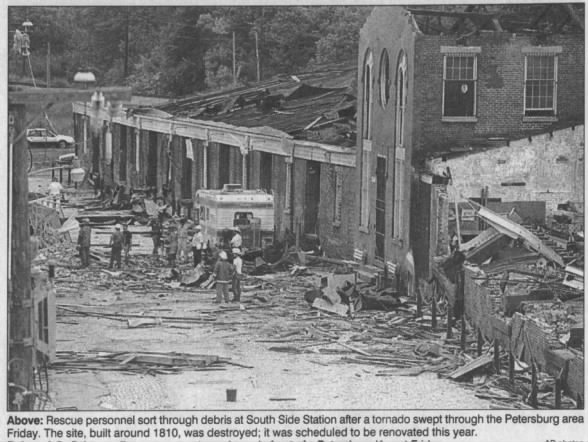 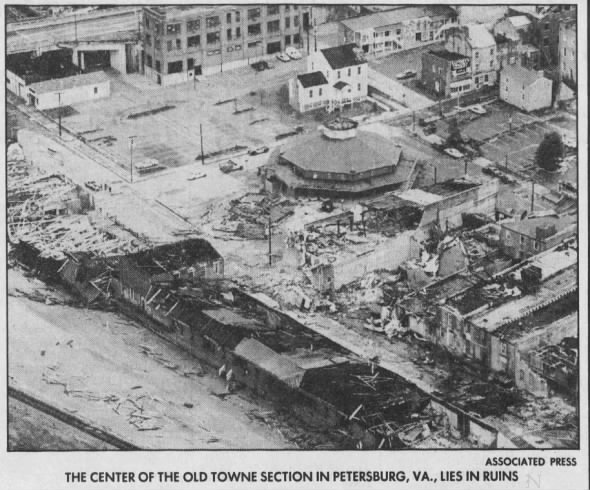 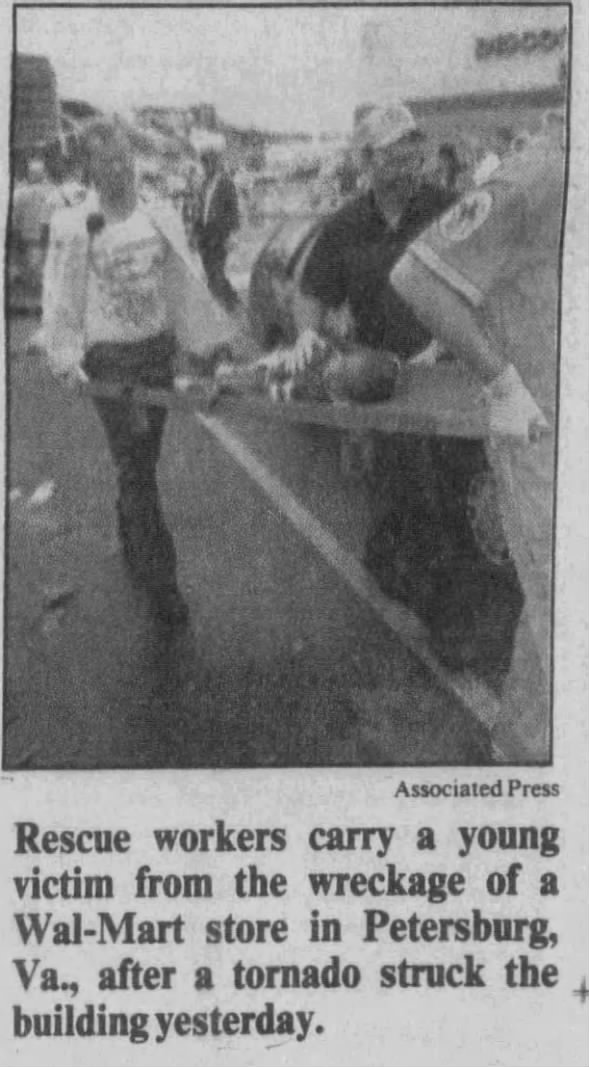 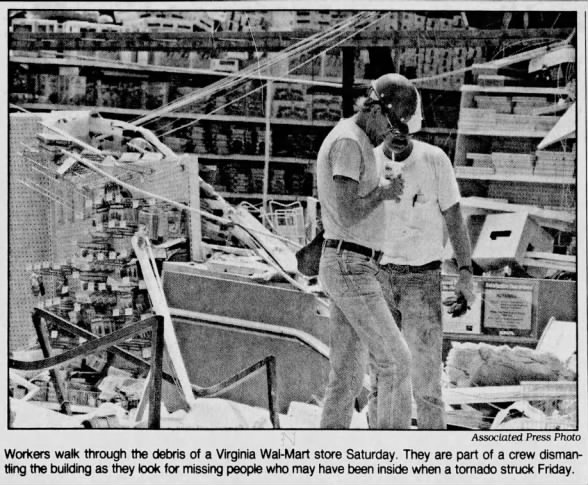 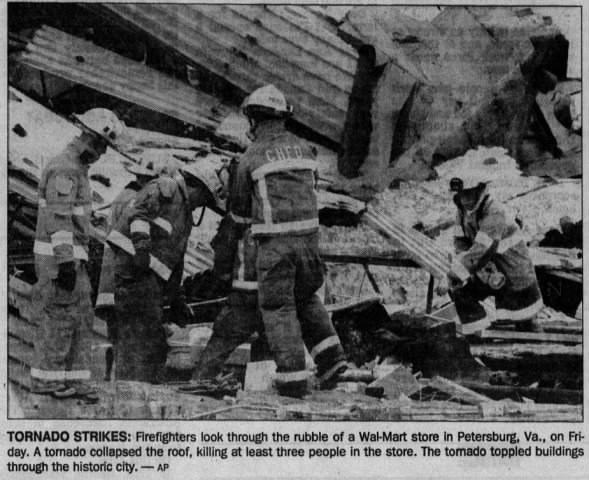 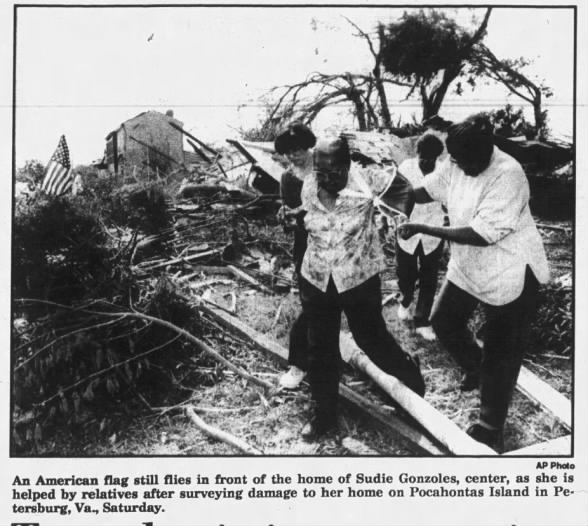 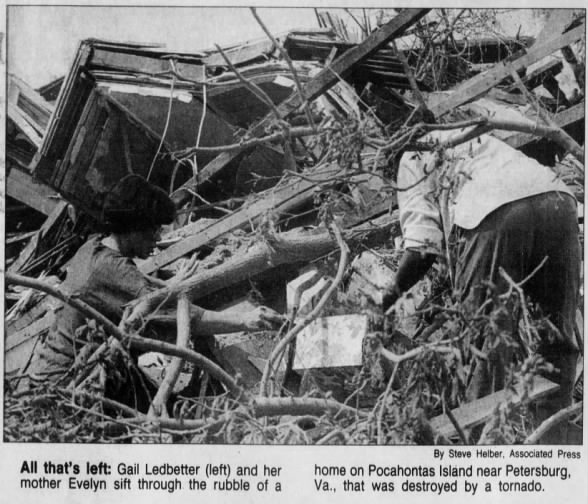 We gathered the information for this event from the SPC & NCDC Databases, the NWS Summary, August 1993 Storm Data Publication and Thomas Grazulis in Significant Tornadoes and found the following differences:

Virginia has seen more tornadoes in April than any other month