There were 37 tornadoes recorded on May 10, 2008.  The strongest, an EF4 that caused extensive damage in the town of Picher, OK.  200 homes were destroyed here and 6 people were killed.  The tornado remained significant as it crossed into Missouri.  In Newton County, several people were killed in automobiles, including a firefighter who was storm spotting.  One vehicle near the intersection of Highway 43 and Iris Road was thrown 5/8 of a mile.

A tornado developed just south of the Oklahoma-Kansas border north-northwest of Welch. It moved rapidly east across northeastern Craig County, intensifying and widening as it moved into Ottawa County. In Craig County, the tornado destroyed several mobile homes, severely damaged about a dozen other homes, snapped or uprooted numerous trees, and blew down power poles and power lines.

This tornado developed at 1620 cst in northeastern Craig County and continued into Ottawa County. The tornado moved rapidly eastward toward the town of Picher where it destroyed about 200 homes, killed six people, and injured another 150 people at about 540 pm. Damage in and around Picher was rated EF-4 on the Enhanced Fujita Scale.

The tornado began moving more southeasterly near Picher and struck the north side of Quapaw. While this tornado was beginning to weaken east of Quapaw, the supercell produced another tornado a few miles east-northeast of Quapaw that merged with this tornado just east of I-44. After the merger of the two tornadoes, a single tornadic circulation reintensified and became about a mile wide for several miles before moving into Newton County MO.

This tornado is an extension of the Ottawa County, Oklahoma tornado. A National Weather Service storm survey revealed that an EF-4 tornado crossed into Missouri just north of Iris Road, and tracked east southeast all the way across Newton County to just north of Fairview. Several people were killed in automobiles, including a firefighter who was storm spotting, as the tornado briefly reached EF4 intensity near the intersection of Highway 43 and Iris Road. One vehicle at this location was thrown 5/8 of a mile. The tornado then extended to a mile wide and EF3 intensity as it tracked across the intersection of Highway 86 and BB. Many of the 14 fatalities and 200 injuries occurred from just west of Highway 43 to Highway 86. The communities of Granby and Newtonia were also directly impacted from this tornado.

This tornado is an extension of the Newton County tornado. A National Weather Service storm survey revealed that an EF-2 tornado tracked across much of Barry County and directly impacted the community of Purdy. One man was killed as he was taking shelter in a mobile home. Numerous structures, trees, and power poles were destroyed.

Radar storm-relative velocity image from the KINX WSR-88D radar at 5:38pm showing the rotation signature associated with the tornado as it was moving into Picher. 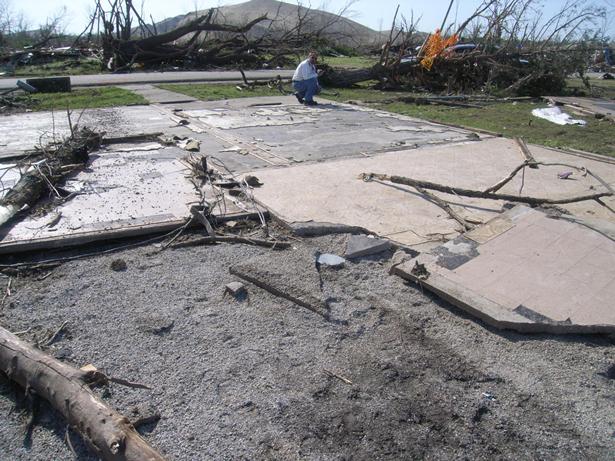 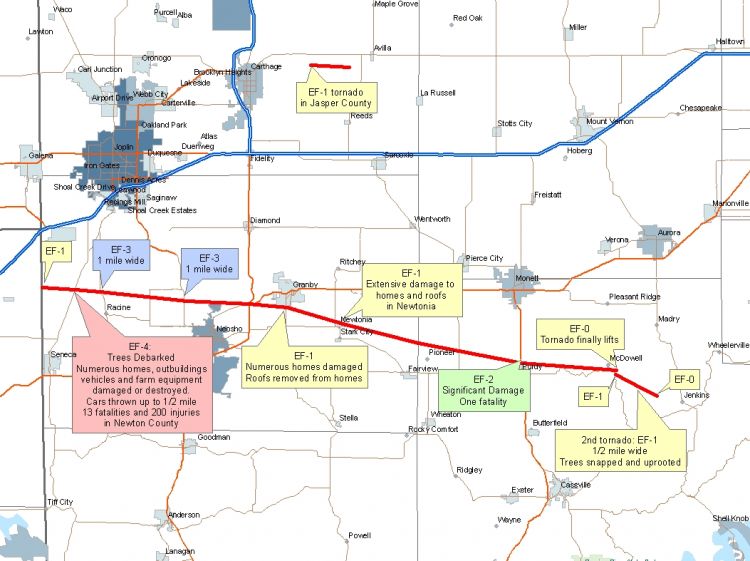 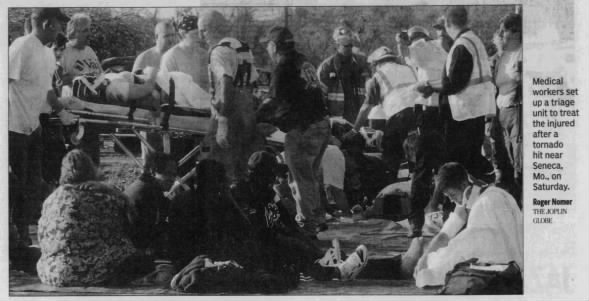 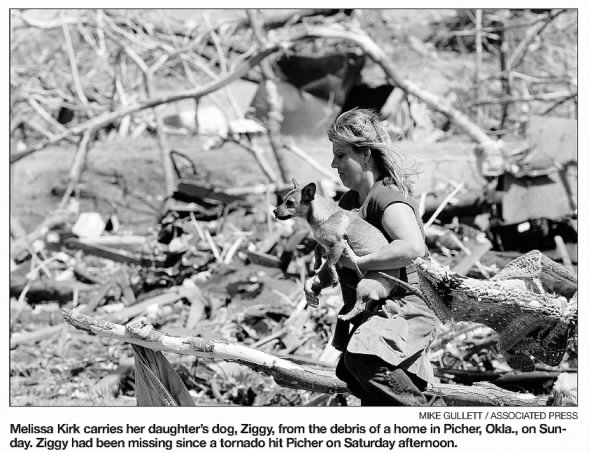 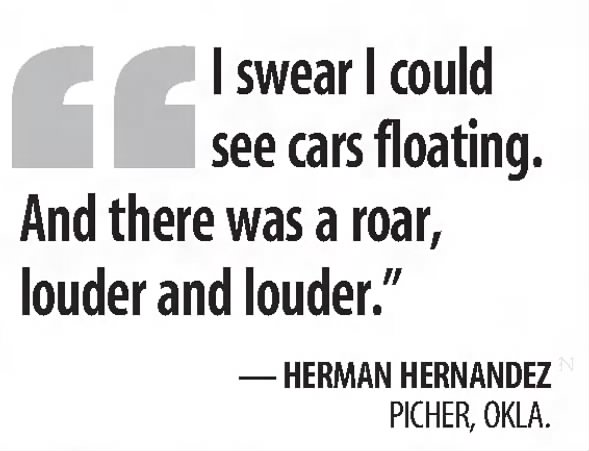 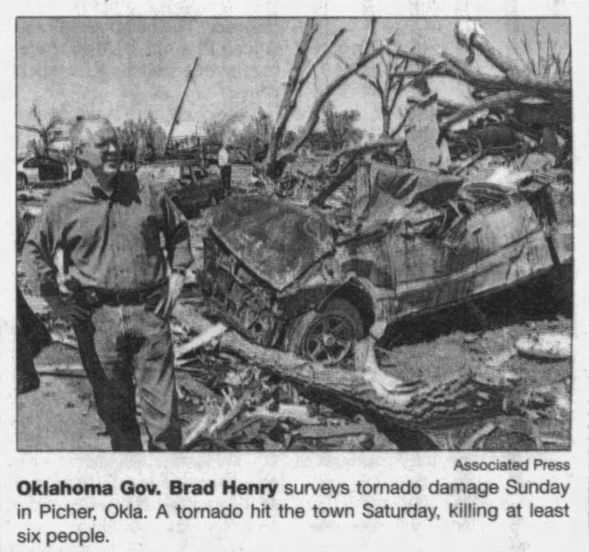 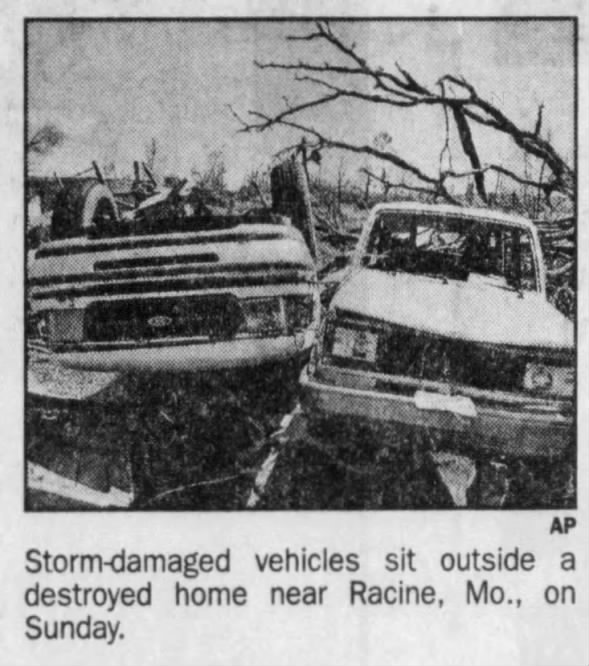 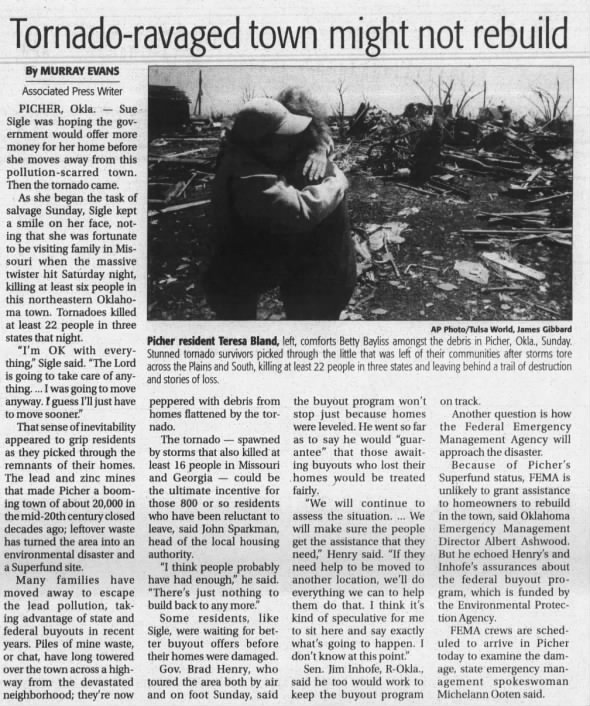