The Palm Sunday Outbreak of March 27, 1994:  It was a devastating day across the South.  Per the SPC, there were 29 tornadoes across 5 states: Texas, Alabama, Georgia, North Carolina and South Carolina.  7 were rated F3 and 2 were rated F4.

This summary will review the most deadly tornado of the outbreak (and the deadliest for 1994).

An F4 moved 50 miles through St. Clair, Calhoun and Cherokee Counties in Alabama and lifted just over the Georgia state line in Floyd County.

The max width was 880 yards.  There were 150 injuries reported and 22 fatalities.  Most of the fatalities occurred at the Goshen United Methodist Church in Cherokee County, AL.  Thomas Grazulis in Significant Tornadoes shared the following from Tim Marshall, a member of the NWS survey team. He stated in the May-June 1994 issue of Stormtrack Magazine, “The steep gable roof (of the church) acted like a sail to catch the wind…the heavy timber roof lifted slightly and shifted, then the sanctuary walls and the roof fell in unison to the north.  Church members were caught without warning. The walls had no intervening columns or lateral braces.  As a result, falling masonry crushed persons in the southern half of the sanctuary.  A long hallway next to the sanctuary could have provided safe haven, as it remained untouched.”

We also have a summary for the 2nd F4 of the day that traveled through parts of North GA.  Read that here.

A tornado began about one mile south-southwest of Ragland in St. Clair County at 1055 CST and traveled northeast at between 45 and 55 miles an hour crossing the Alabama/Georgia border about five miles northeast of Rock Run in Cherokee County. The tornado moved across County Highway 144 just south-southwest of Ragland where it first began then destroyed a number of structures along 144 to the east of Ragland. The tornado crossed primarily wooded land before moving through a camping area on the west side of Neely Henry Lake.

A woman was killed outside on the west side of the lake as she tried to secure a boat. The tornado crossed Neely Henry Lake just north of the dam as it moved into Calhoun County. Twenty-six homes were damaged, 18 homes were destroyed, and 20 mobile homes were destroyed in St. Clair County.

Moving into Calhoun County at 1104 CST, the storm continued on a steady northeast track (60 degree heading) crossing the north side of Ohatchee. The storm crossed U.S. Highway 431 at 1120 CST where one man was killed when the van he was in was thrown into a ditch. Three other people in the van were injured.

The storm continued northeast across mostly woodlands with only scattered structures, mostly homes, in its path. It crossed U.S. Highway 278 between four and five miles west-northwest of Piedmont. The storm entered Cherokee County at 1135 CST. 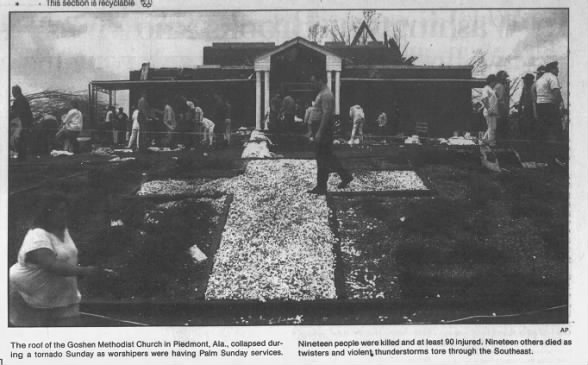 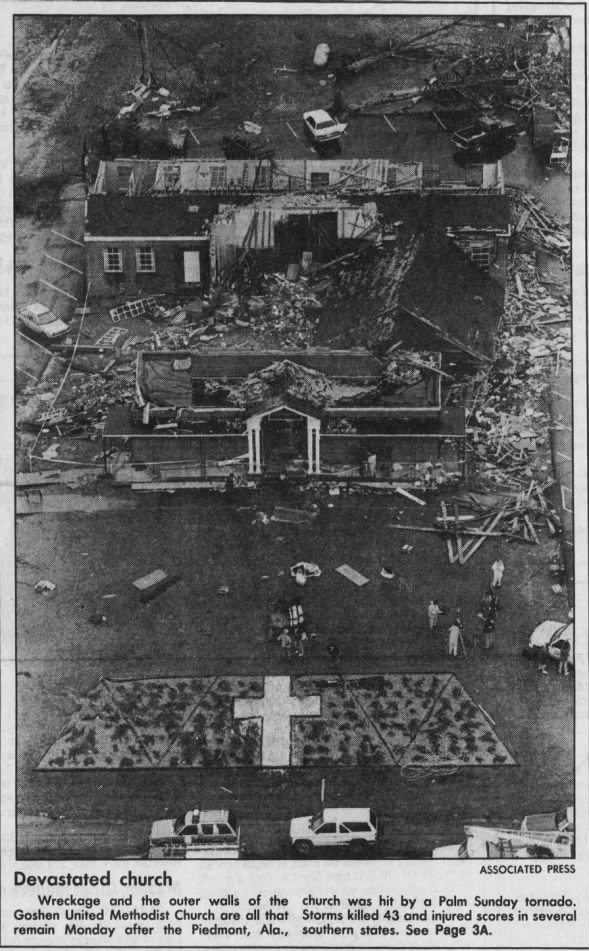 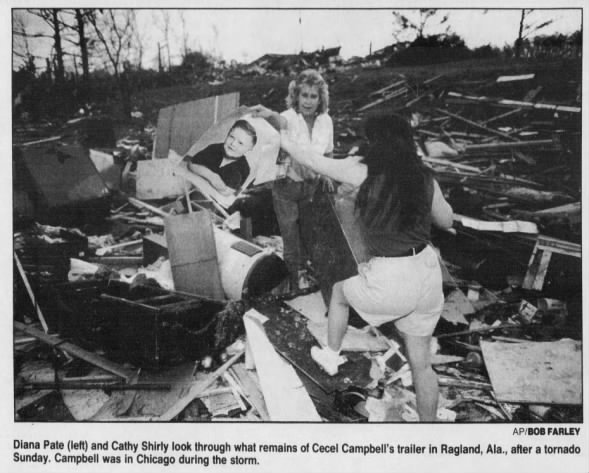 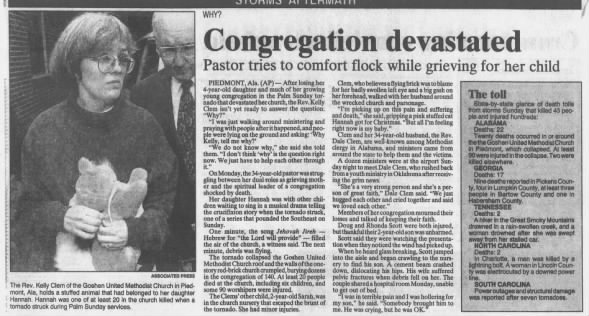 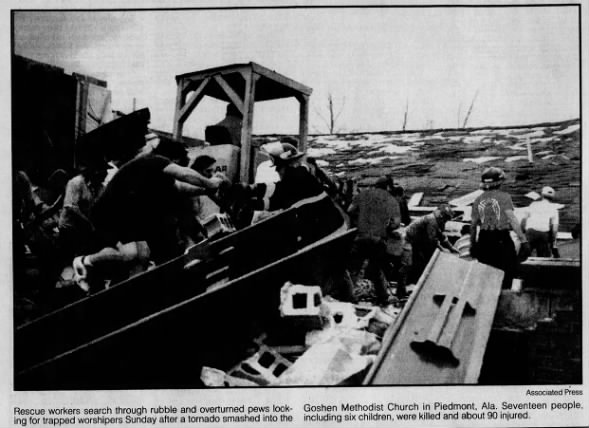 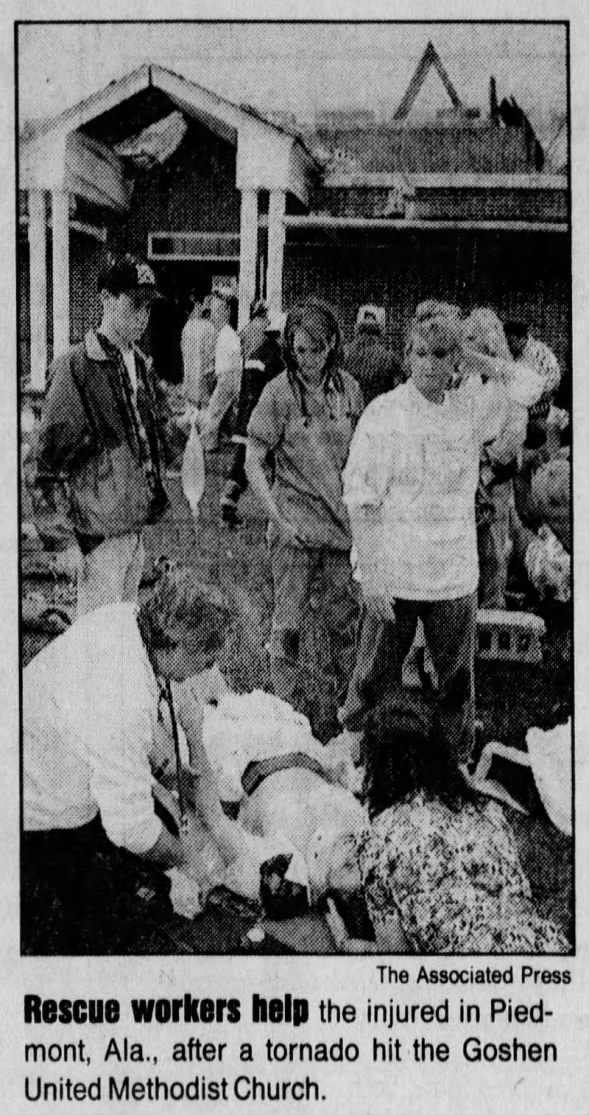 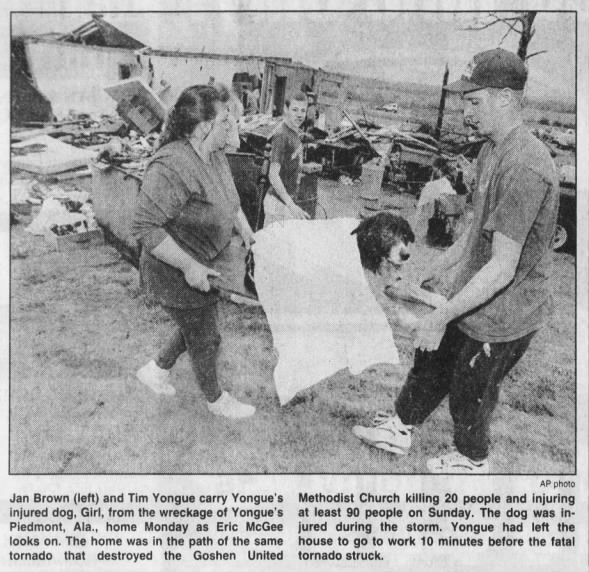 We gathered information for this event from the SPC & NCDC Databases, the March 1994 Storm Data Publication and Thomas Grazulis in Significant Tornadoes and found the following differences:

NOTE:  There are NO entries in NCDC for the Georgia tornadoes that occurred on this day.