It was the deadliest and most damaging tornado of 1990.  An unusual, late August F5 tornado crossed just over 16 miles in less than 30 minutes across parts of Kendall and Will Counties in Illinois.  It caused an estimated $165 million in damages.  A total of 470 homes were destroyed and another 1000 were damaged.  29 people were killed and 350 more were injured.

The August 1990 Storm Data entry, which I have included below, is extremely detailed on where the damage, fatalities and injuries occurred. Here is a generalized overview of the track and the intensity at different points along that track (all per Storm Data).

The tornado developed near Oswego.  For four miles, it produced F1 & F2 damage.  It intensified to an F3 at Wheatland Plains.  As the tornado approached Plainfield, it because an F5.  A varying degree of significant tornado damage was found in Plainfield (the high school had F3 damage). For the next 4 miles after leaving Plainfield, F3 and F4 intensity damage was found.  Numerous homes, apartment complexes and several shopping malls had significant damage or were destroyed.  The tornado decreased in intensity on the west side of Joliet.  F1 and F2 damage was found here.  The tornado continued to weaken as it crossed Larkin Avenue just north of Glenwood Avenue and lifted within a half mile.

Below are images from an aerial survey performed by Dr. Ted Fujita and Mr. Duane J. Stiegler.  This was included in the August 1990 Storm Data Publication.  Numerous microbursts preceded this massive tornado.   If you look closely, Fujita maps out the microbursts and embedded within them are 4 other small tornadoes (labeled No. 1 through No. 4).  These are not counted in the official SPC Database.  The Plainfield tornado begins at “No. 5” on the map.

The next image shows Fujita’s detailed maps along the Plainfield tornado path. 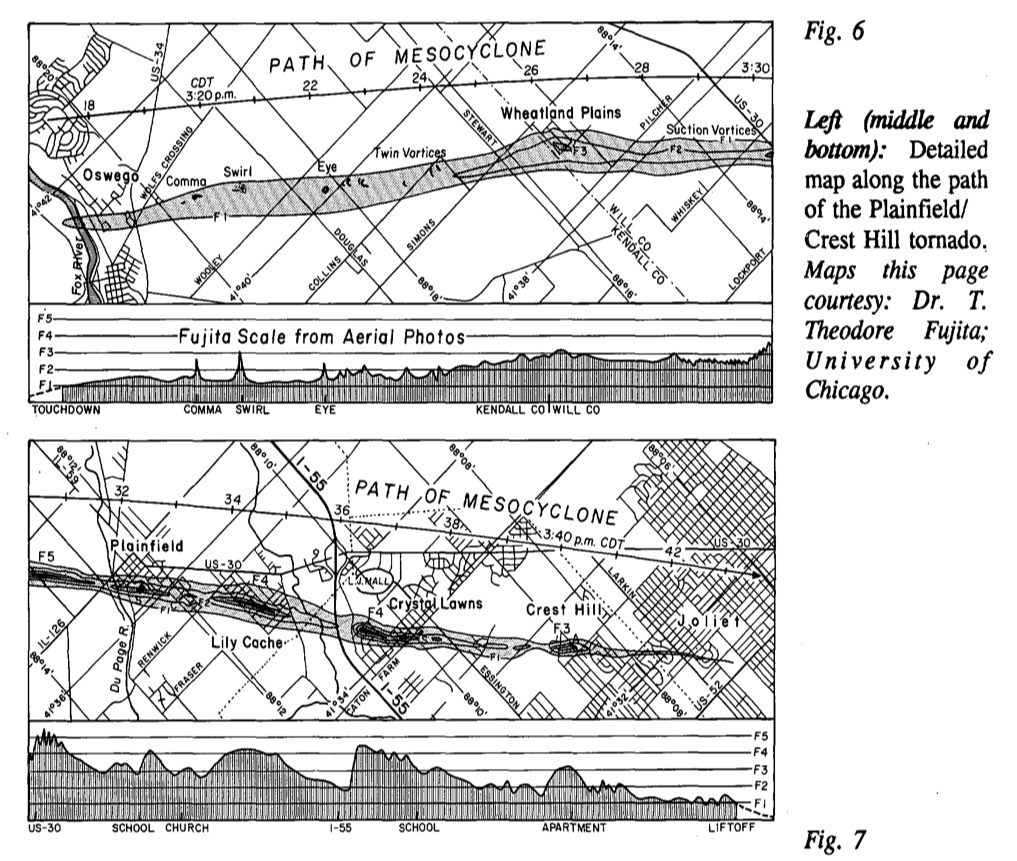 Per an excellent article on the 20th anniversary of the event from the Summer 2010 edition of Weather Currents by the NWS Chicago, they listed a few other reasons why this tornado was “unusual”:

A large, killer tornado spun a path of destruction across Kendall and Will counties late in the afternoon.  This unusual, late August tornado killed 29 people and seriously injured at least 350.  It caused an estimated $165 million damage, including about $100 million damage to private property, and at least 50 businesses were destroyed.  Many homes, townhouses and apartments are destroyed or damaged.

It first touched down at at Oswego at about 1430 CST and moved southeast, crossing the Kendall-Will County border, 6 miles south of their north border, and lifted at about 1450 CST in Joliet.  The damage path was 16.4 miles long and ranged from 200 yards to a half-mile wide.

Aerial survey revealed the tornado first touched down at Oswego, damaged several buildings, and moved southeast across crop land roughly parallel to US Route 30.  The first 4 miles it was F1 and F2 across rural areas, then became F3 across Wheatland Plains where it destroyed 12 homes, damaged 50 and did more than $9.2 million damage.  As it approached Plainfield, it reached maximum intensity F5 and destroyed two large steel electric transmission towers and damaged others.  It then destroyed Plainfield High School with F3 intensity, where double brick and concrete block walls were demolished, and 2,300-pound concrete blocks were toppled.  The football team was practicing and took shelter just before the tornado struck.  Also in Plainfield, six people were killed, 55 homes were destroyed and 205 damaged.  Grand Prairie Elementary School and District Administrative Center were destroyed for a total estimated loss of $60 million.  At Saint Mary Immaculate, three people died, and $6 million damage was done to the church, school, rectory and convent.

The surprise factor was great with this tornado because a powerful thunderstorm was in progress with low cloud bases, and its early stages were masked by the preceding downburst.  Eyewitness accounts testify to abrupt and complete devastation;  people were unable to communicate the damage to others until it was too late. 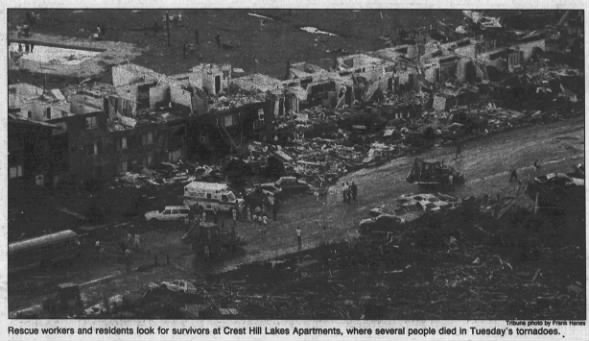 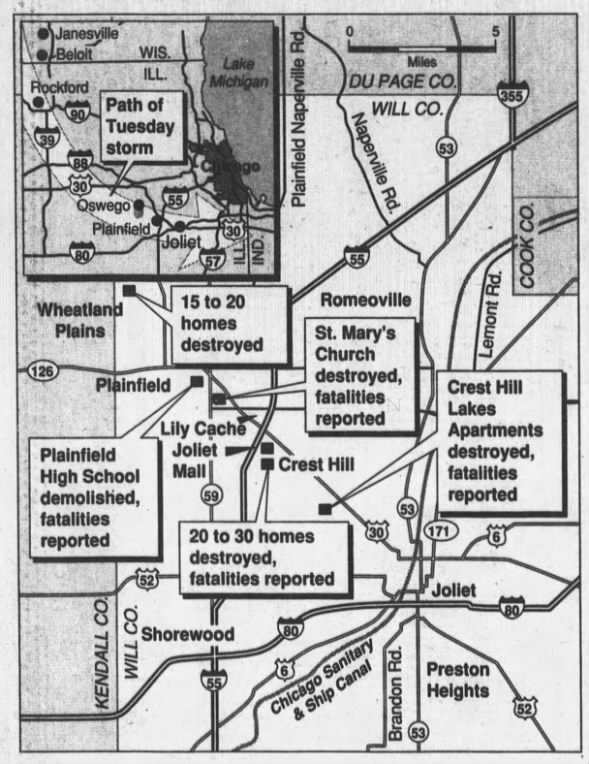 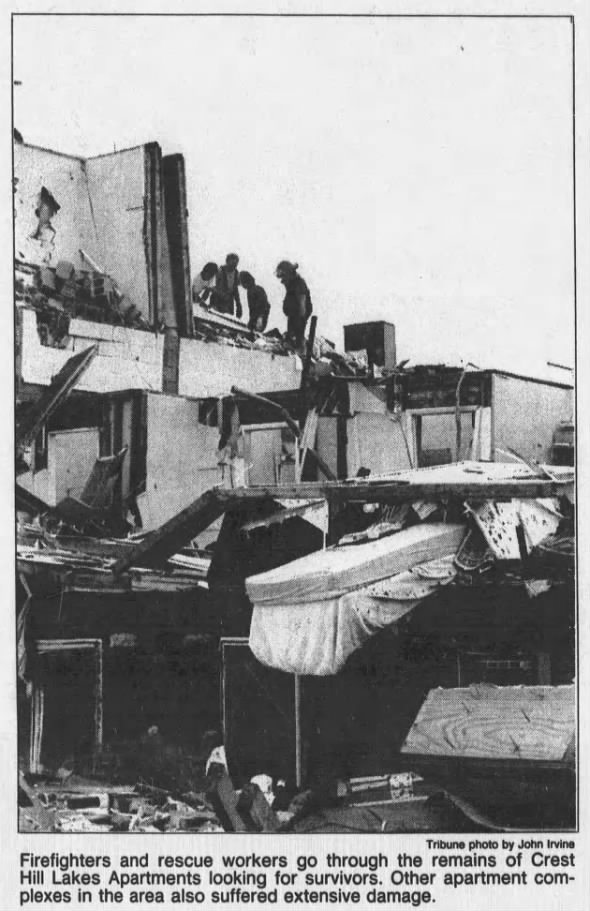 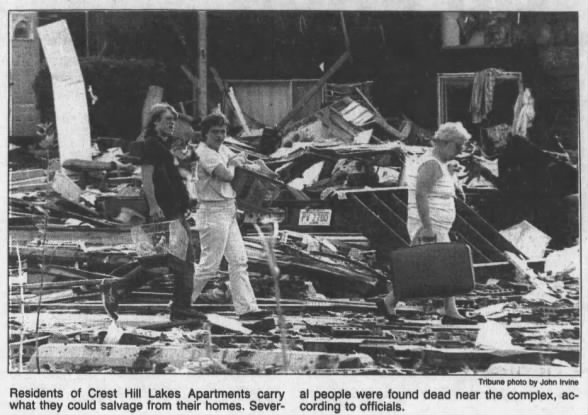 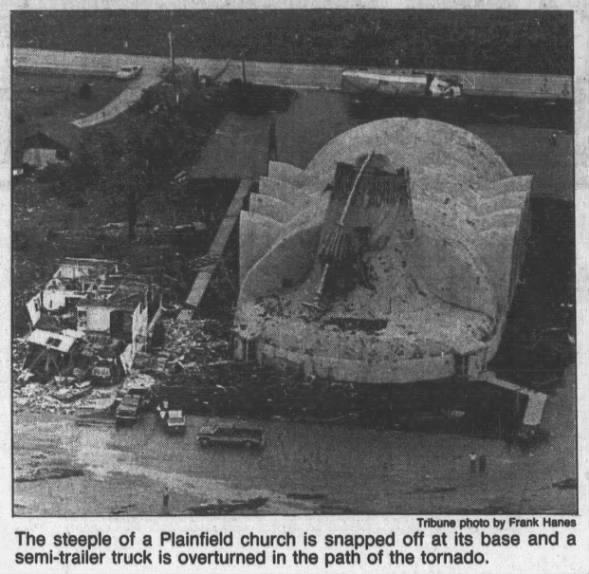 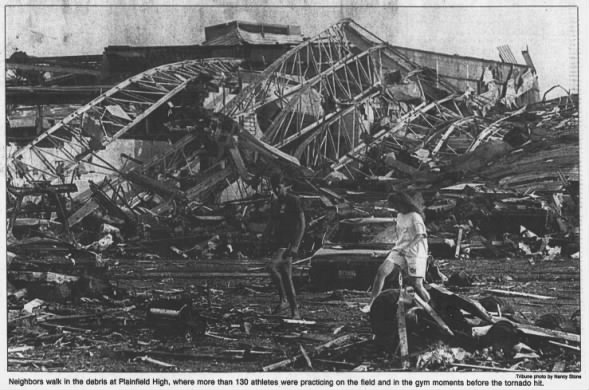 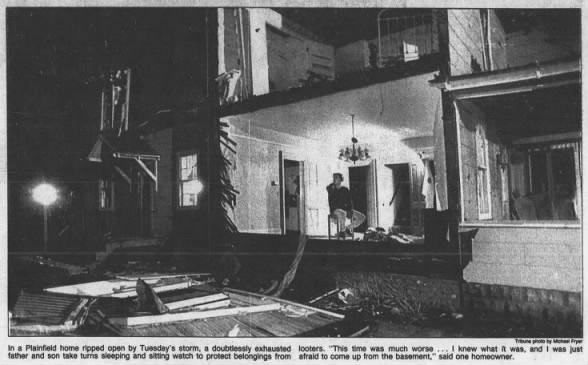 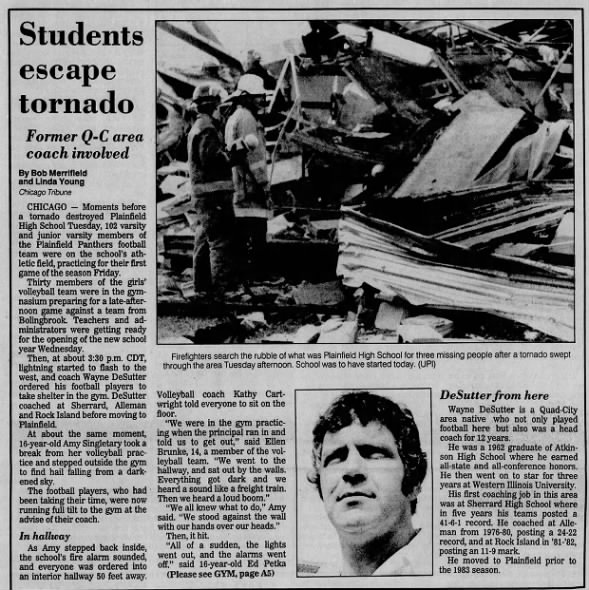 We gathered information for this event from the SPC & NCDC Databases, the August 1990 Storm Data Publication and Thomas Grazulis in Significant Tornadoes and found the following differences: