A quick-hitting tornado later rated F4 caused significant damage to a few farms, a house and 5 other buildings on this day in 1956.  The damage was found North of Pleasanton.  Per Thomas Grazulis in Significant Tornadoes, “dead chickens were scattered for a half mile.”  One injury was noted in the Climatological Data National Summary and by Thomas Grazulis.

Found some interesting newspapers articles that would suggest we could add another injury.  In an article from the Kingsport New, a pilot describes his experience in this tornado.  Captain Robert J. Manning was flying an F86D Sabre Jet.  He was enroute from Madison, WI to Fresno, CA.  “Lightning struck the front of the plane nipping the nose.  Severe turbulence exploded his cockpit canopy.  His radar was out and he lost radio contact.”

The pilot describes how the leading edges of the plane were riddled with hail.  Dirt from the floor of the plane swirled around in the air.  His only injury was reddened eyes caused by the swirling dirt and dust.  He made a safe landing at the North Platte airport. 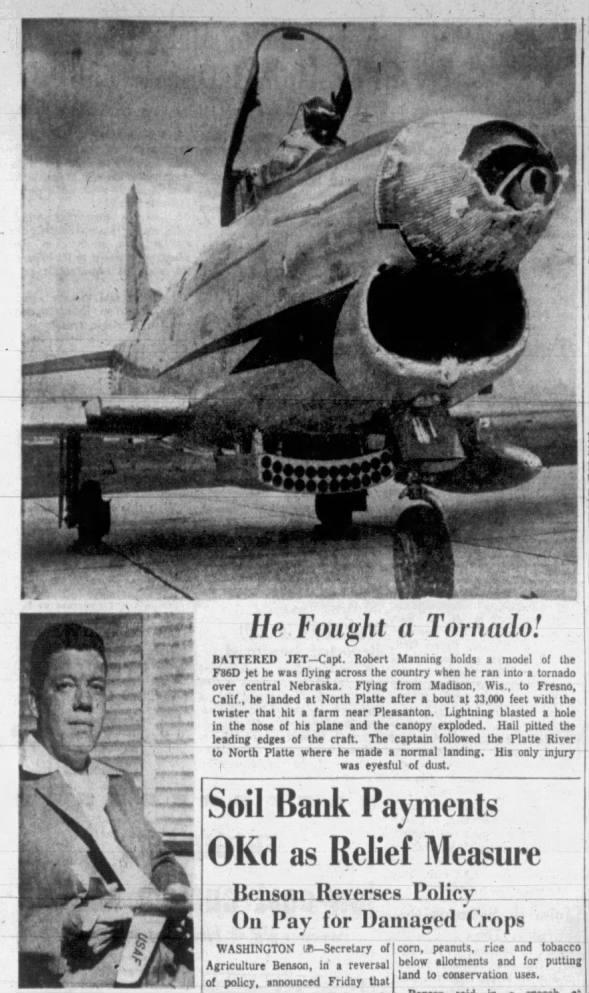 We gathered information for this event from the SPC & NCDC Databases, the June 1956 Climatological Data National Summary (CDNS) and Thomas Grazulis in Significant Tornadoes and found the following differences: