Per the Storm Prediction Center, 31 tornadoes occurred on May 5, 1960.  The most violent was given an F5 rating.  It tracked 71.8 miles through Pottawatomie, Lincoln, Okfuskee and Creek Counties in Oklahoma.  The max width was 800 yards.  There were 81 injuries and 5 fatalities reported.

Details from the Storm Data Narrative:

This violent tornado was initially observed as it formed in the North Canadian River bottomlands just south of the city of Shawnee. Several farmsteads and the Resthaven Cemetery were damaged or destroyed 2 miles east of Shawnee. Several more farmsteads were destroyed and general destruction occurred in the Eoontuohka area. At least 14 farmsteads were destroyed between Prague and Paden at 5:27 PM CST. There was extensive destruction in the area.

The tornado was described as barrel as a huge, white, barrel-shaped cloud that stayed completely on the ground. Northeast of Prague, a million dollar refinery received about $750,000 in damage. Several company homes were destroyed. Farmsteads were damaged and destroyed all along the rest of the rest of the long path northeastward.

Two people were killed and eleven injured in the Iron Post area south of Bristow. This tornado caused the most damage as it moved through the west and north portions of Sapulpa at 6:32 PM CST. Three persons were killed and 70 injured, and a total of 1000 people were homeless.

There were about 300 homes destroyed or damaged. Of this, a total approximately 100 homes were completely destroyed with 100 more receiving heavy damage and another 100 homes incurring partial damage.  A school and 2 churches were also destroyed, and trees and utilities were heavily damaged. The storm covered a 12-15 block area in Sapulpa.

The funnel lifted northeast of Sapulpa and was observed aloft over Tulsa at 7:00 PM CST. High winds destroyed a house in Tulsa and other general damage was reported. Large hail fell east and northeast of Shawnee, and some hail was observed near the entire path of the tornado.” 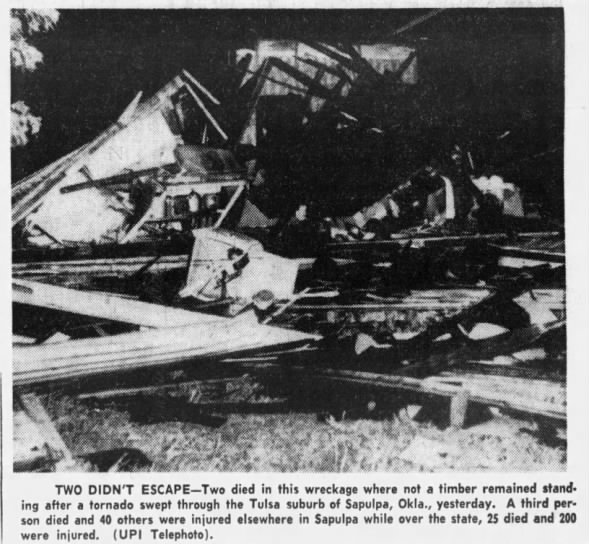 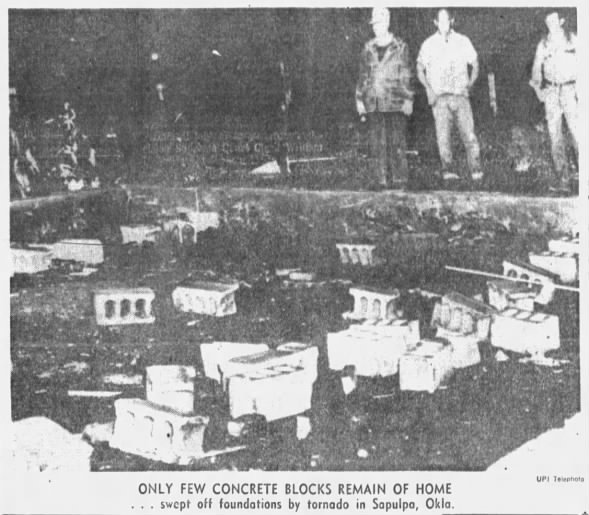 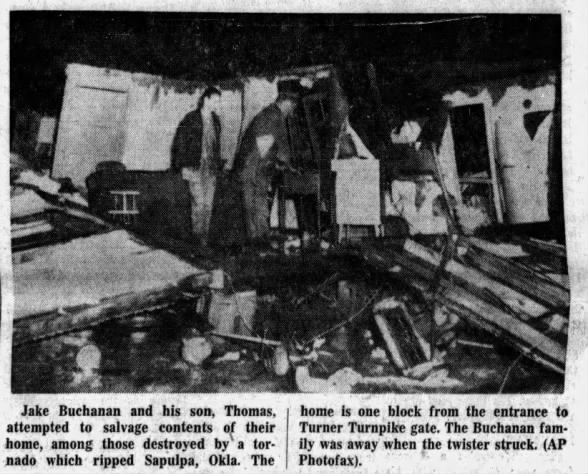 We gathered information for this event from the SPC & NCDC Databases, Storm Data information via NWS Norman and Thomas Grazulis in Significant Tornadoes and found the following differences: