This F4 tornado began south of Niota in Hancock County, IL and traveled 50 miles through Henderson into Warren County where it dissipated 6 miles SW of Abingdon.

The tornado reached F4 intensity 1 mile NW of Disco in Hancock County. Several farms were leveled.  Near the small community of Raritan, a farm was hit throwing the owner about 70 yards out of his home into a field.  The only thing left in the home was the basement stuffed with debris.  Most of the damage in the Raritan Community was along and south of Main Street.

The supercell storm that produced this tornado developed over Clark County, Missouri and produced a funnel cloud over Fort Madison, Iowa before it moved into west-central Illinois and preceded to produce a large tornado.

The tornado started out as an F0 when it first touched down south of Niota and, based on damage surveyed the following day, grew to F3 strength by the time it reached Dallas City. Eye witnesses saw three separate funnels at on point. The Dallas City school received major damage and one older house was blown off its foundation. Several mobile homes were destroyed and a car was rolled six feet up a hill.

The tornado preceded to the northeast and gained in strength. About one mile northwest of Disco the tornado reached F4 strength. At this time the tornado was just about right on the county line between Hancock and Henderson Counties and struck the Maxine Clover farm site. The Clover brick home was totally destroyed with only a few parts of walls still standing. The tornado appeared to be about one-half mile wide.

The tornado continued to the northeast where it struck the Dick Edmunds farm site. The Edmunds seventeen year old brick home was destroyed along with most of the other farm buildings. Sixty animals had to be destroyed.

As the tornado crossed highway 94 just south of Terre Haute it only produced F0 to F1 damage, but still appeared to be about one-half mile wide by the scoured dirt path it ground into the area farm fields.

At this time the tornado was approaching the small community of Raritan. The Wendell Shaner farm site, located one and one-half miles southwest of Raritan, was hit at this time. Mr. Shaner was thrown about 70 yards out of his home into a field east of the house. Mr. Shaner received broken rips and other internal injuries. The Shaner farm site was totally destroyed. Where the home had been located there was nothing left, but the basement stuffed full of debris. Hundreds of dead hogs were scattered along and up a hill to the northeast of the home site.

The tornado then clipped the southeast corner of the community of Raritan where damage was limited to areas along and south of main street. The Carl Huss home was totally destroyed while he was in the basement. Mr. Huss received a large bruise on his back when cement blocks were pulled in from the west side of the basement as the home was shredded off its foundation. The 137-year-old farmstead of John and Bev Livermore was also hit at about this time. Mr. Livermore was in the basement with his two grand-children when the tornado struck. The home heating fuel tank, located in the basement, was sucked up and thrown 50 yards away from the house. Mr. Livermore literally had to lay on his grandson to keep him from being pulled out of the basement. The home was totally destroyed.  (Note:  Thomas Grazulis in Significant Tornadoes added that newspaper reports indicated that Mr. Livermore had to “reach out, grab the boy’s leg, and pull him back down into the basement to keep him from getting sucked into the funnel.”)

The Richard Likes home, also on the east side of Raritan, was totally blown off the foundation and pushed 50 yards into the field to the east. The Likes were not home at the time. This is also about the time the tornado appeared to reach its maximum width of 0.6 miles. One to two miles northeast of Rariton the large tornado either weakened or dissipated. Regardless, F0 to F1 damage and debris continued across Warren County from either the weakened tornado or multiple spinoff tornados. The tornado finally exited Warren county about six miles southwest of Abingdon. This large tornado produced no fatalities and only one injury was of a serious nature. 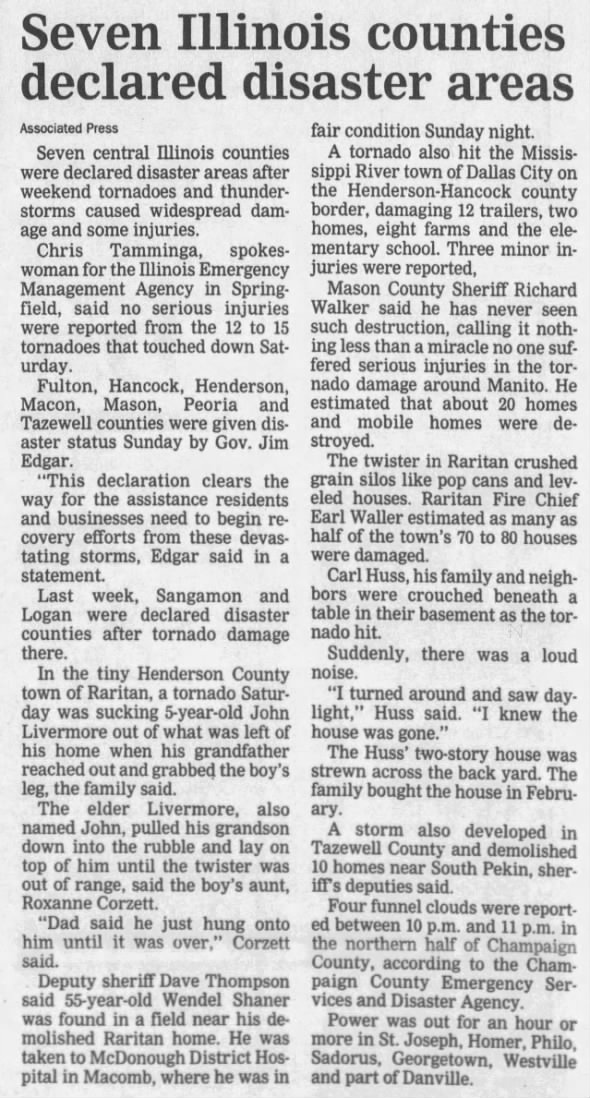 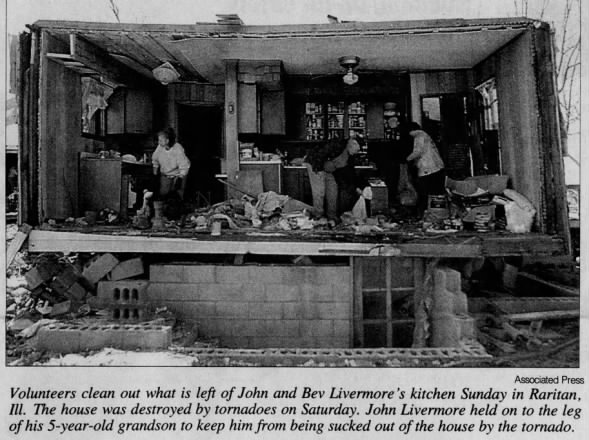 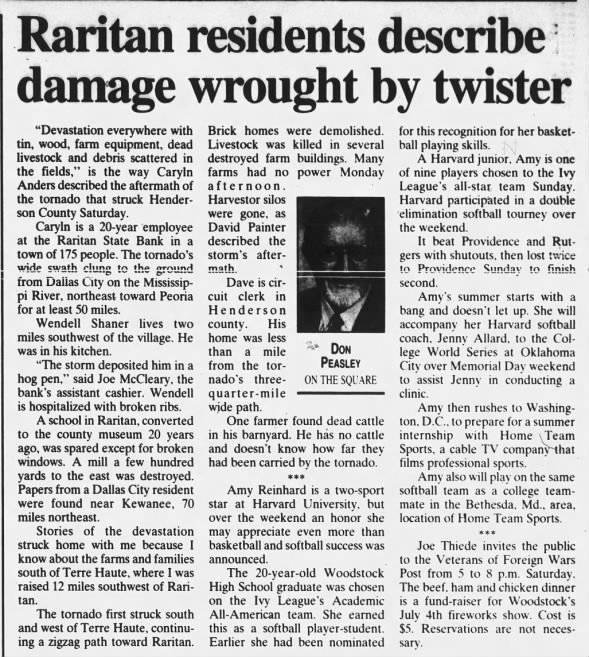