Per the SPC Database, 15 tornadoes touched down in Nebraska on March 13, 1990.  The strongest, an F4, traveled from 3 miles south of Red Cloud in Webster County and lifted 3 miles East of Schuyler in Colfax County.  The maximum width was 440 yards.  There were eight reported injuries.

The SPC has a path length of 131 miles.  The Storm Data entry and the summary from the NWS both state the path was 124 miles.  Thomas Grazulis states in his book Significant Tornadoes that this was a family of tornadoes that covered 124 miles.

This tornado developed 3 miles south of Red Cloud in Webster County.  One farm was “completely wiped out” northeast of town.  Seven farmhouses were damaged, and several outbuildings and power lines were destroyed.  Livestock was killed in this area.

The tornado moved northeast into Nuckolls County, 1 mile SW of Lawrence.  At Lawrence, 68 buildings were damaged.  This included 53 residences in Nuckolls County.  Eight homes and a lumber yard were destroyed.  Several vehicles, outbuildings, power lines, and a grain elevator were damaged.  Eight farms were damaged, and many livestock were killed in rural areas around Lawrence. There were three injuries.

The twister entered Clay County around 1810 CST, 2 miles WSW of Deweese.  49 homes were damaged, and one business was destroyed.  Severe damage occurred in the Sutton area.  A small airplane was demolished.  A pickup truck was flipped, injuring three people.  A police car was also overturned, and the officer was injured. 110 cars were damaged at a car dealership.

The tornado crossed into the extreme NW corner of Fillmore County, 6 miles west of Grafton. Outbuildings, trees, and power lines were damaged in this area.

At 1835 CST, the tornado moved into York County, 2 miles to the SSW of Lushton.  Most of the damage occurred in rural areas near the I-80 interchange.  A farmhouse and buildings were heavily damaged 4 miles west of McCool Junction.  At the I-80 interchange, a roof was torn off a motel, and 2 people were injured by flying glass.  Two semis were destroyed, and a gas station and convenience store were heavily damaged.  A farmhouse 3 miles SW of York was destroyed.  In the Waco area, 57 railroad cars were knocked off the track.  10,000 geese were killed in the county.

The tornado next entered Seward County, 11 miles WNW of Staplehurst.  Most of the damage was to trees and power lines.

At 1900 CST, the tornado traveled into Butler County 6 miles WSW of Ulysses.  Several farmsteads were damaged from Surprise through the David City area.  35 homes were damaged or destroyed. 155 other structures were damaged.  1200 livestock were killed or injured.  The tornado did not directly hit David City.  A police car in the area was overturned.

Image from the NWS Hastings Summary 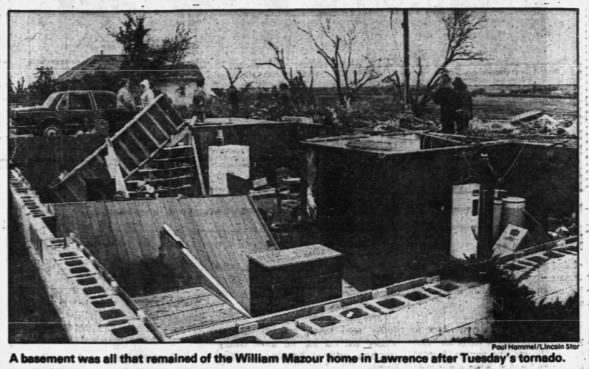 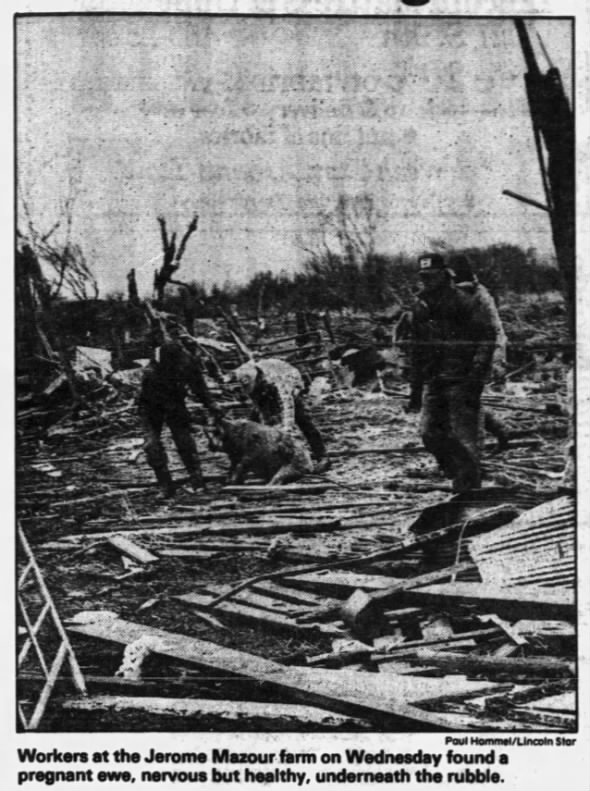 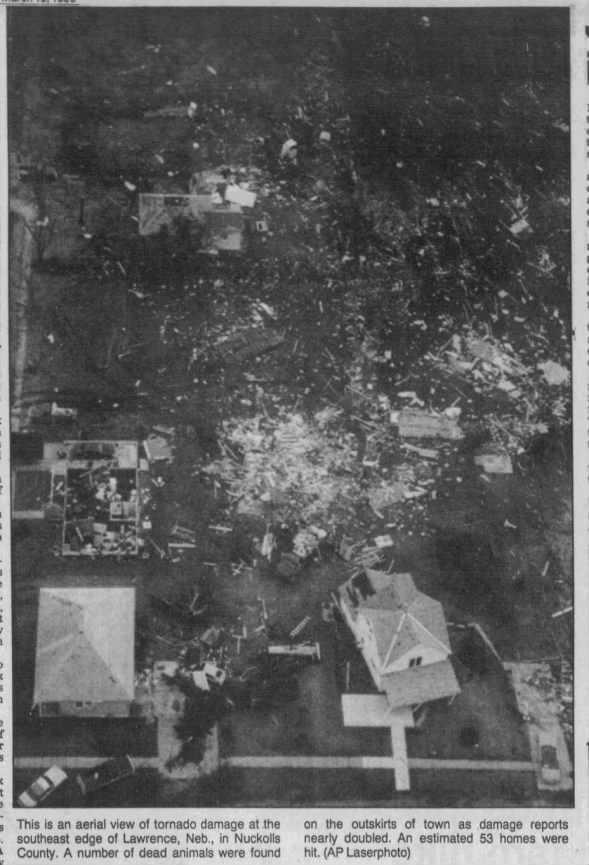