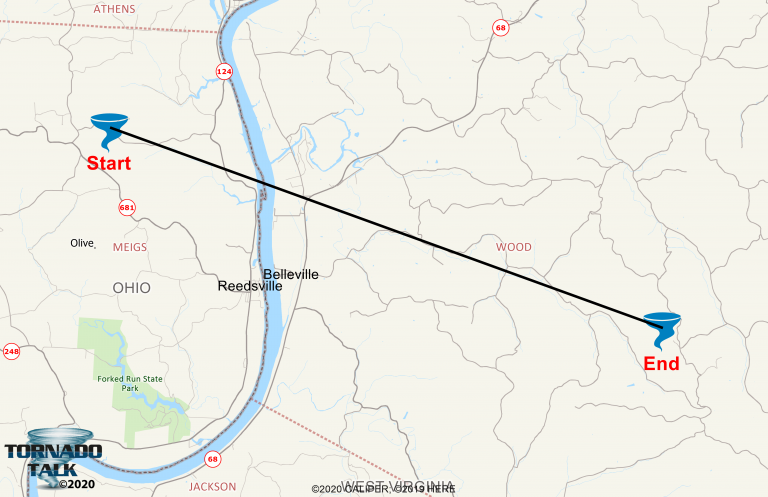 Path appears to be too far north based on the Storm Data entry description.  Reedsville and Belleville hit.

Fifteen tornadoes are recorded in the SPC Database for September 15, 2010. The strongest was an EF3 that made a trek from Meigs County, OH near Reedsville over the Ohio River into Wood County, WV near Belleville. The estimated maximum winds were estimated between 150-160 mph. Per the Storm Data entry, in Meigs County, 22 structures were destroyed or had major damage. This was mainly mobile homes or single-family homes. There was a car repair shop that was destroyed. Two people in Meigs County were seriously injured. One man received rib and leg fractures when his truck was flipped. A woman was injured in the rubble of her mobile home. Per the NWS summary, her barking dog led first responders to find her more quickly.

Per the NWS Charleston, WV, this EF3 in WV was one of the strongest to hit in decades. It also resulted in the state’s first tornado-related fatality since the early 1980s. A 57-year old man had taken shelter in the basement with his wife and dog. He went upstairs to get a flashlight when the tornado hit their ranch home. His body was found 150-200 feet in a field. A total of 10 homes were destroyed in Wood County. Another six homes had major damage and 27 residences attained minor damage. More than 15 outbuildings were destroyed.