This tornado is considered “the most devastating to strike West Virginia since 1944.” That was written in the July 1980 Storm Data Publication by the NWS.  Looking at records since that point, there as only been one F3 to hit the state since this one.  It occurred October 1, 1986 in Doddridge County. The path length was only a mile and the damage was not as widespread.

The June 3 tornado tracked nearly 30 miles from the extreme eastern parts of Monongalia County through Preston County hitting the town of Reedsville.  It moved through the community of Manown to south of Kingwood and south of Terra Alta before moving into Garrett County in Maryland.  The town of Crellin was hardest hit in Maryland.  There were no fatalities reported with this event.  There were 19 injuries.

A mobile home park was hit near Kingwood.  A 2-year old was tossed into a pasture nearly a mile away from her home.  She suffered head injuries and fractured legs but survived.

The most devastating tornado to strike West Virginia since 1944.  There were no deaths but 15 were injured.  Initial touchdown was near Ridgedale in extreme eastern Monongalia County.  Tornado moved southeast hitting Reedsville in Preston County, to Manown, to southern Kingwood, passing 2 1/2 miles south of Terra Alta, then moving into Garrett County, Maryland.  Total path length of 29 miles, 24 in West Virginia.

One of the hardest hit areas was Reedsville, a community of 400 people.  Extensive damage at Kingwood Mobile Home Village near Kingwood.  It was here that a two year old child was thrown into a pasture nearly a mile from her trailer home.  She suffered head injuries and fractured legs.  A large number of injuries or deaths were probably prevented because schools were close due to primary elections.

Tornado moved from the vicinity of Crellin near the West Virginia line, east-southeastward in an apparent non-continuous path to across Backbone Mountain.  One person observed the funnel approaching with debris floating around it.  At least two mobile homes were demolished.  The family in one narrowly escaped by flattening out on the kitchen floor.  A man was picked up as he attempted to leave another trailer, and was carried nearly 50 feet.  He was listed in satisfactory condition with a fractured ankle and lacerations.

Property on 12 farms received various damage and a large metal building belonging to a sand company was destroyed.  In addition, some 15 homes in the vicinity of Crellin were damaged and many trees were uprooted, one nearly destroying a home when it fell through the roof.  Total property damage estimated at near $300,000 with crop damage estimated at around $40,00

Note:  Starting coordinates from SPC seem off.  The tornado went through Reedsville but that is not shown.  Starting point should probably be placed further NE. 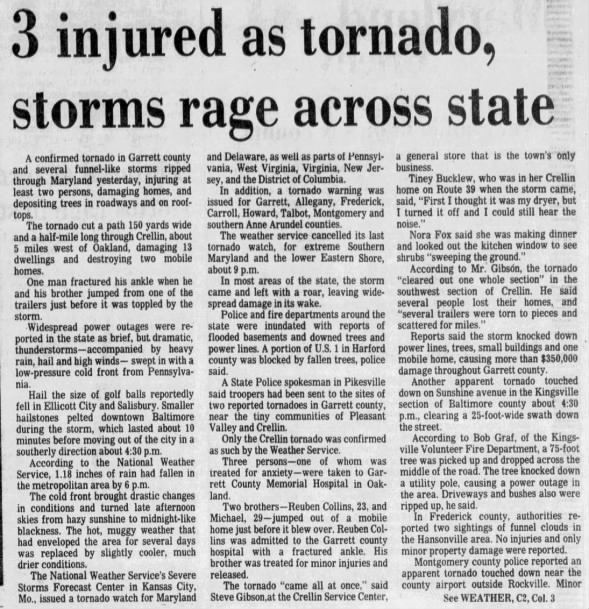 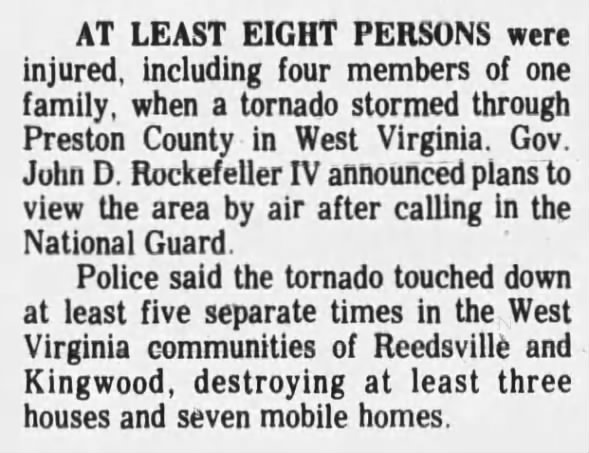 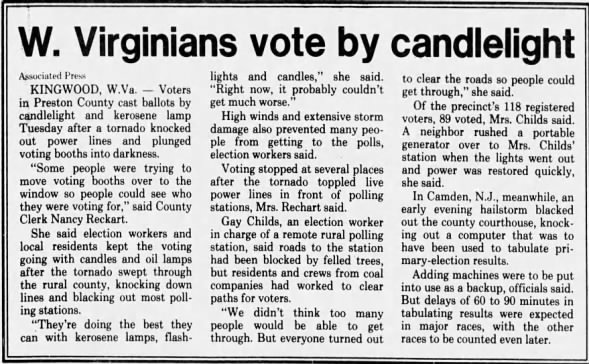 We gathered information for this event from the SPC & NCDC Databases, the June 1980 and July 1980 Storm Data Publications and Thomas Grazulis in Significant Tornadoes and found the following differences: