April 27th, 2011. Thanks to advances in weather forecasting technology we knew it was going to be a bad day early on. Still I don’t believe anyone was prepared for how devastating this tornado outbreak would be.

At the time, I was General Manager of WRSA (Lite 96.9) in Huntsville, Alabama. I also hosted the morning show. The storms hit early that day and relentlessly continued into the evening. WRSA was affiliated with The Weather Channel Radio Network, which provided us meteorologists to go on the air live to cover severe weather for our area. During that morning, our on-air meteorologist was the late, talented Nick Wiltgen. Nick was more than a voice from another city, he was an essential part of our morning show… and a close friend who would come to Huntsville and visit often. Nick knew every landmark, roadway, county and small town in our coverage area. Because of his knowledge of Huntsville, he was a master at communicating to our listeners where the storms were headed. One person called the next day to tell us she was listening while driving and changed her route because of Nick’s storm tracking. She said “Nick Wiltgen saved my life.” 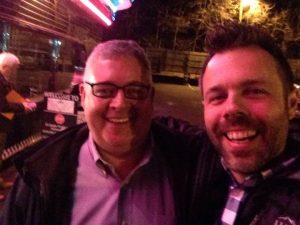 Throughout the day, into the evening, we endured round after round of severe storms. Many containing tornadoes.

Huntsville’s source for electricity is the Brown’s Ferry Nuclear Plant near Tanner in Limestone County, Alabama. The large transmission lines were destroyed by a tornado that afternoon. It also wiped out the radar site for Huntsville’s NBC-TV affiliate WAFF. This resulted in a power outage that spanned Huntsville and Madison County. WRSA had generator power at both its transmitter site and the studio, however on this fateful day the studio generator would not crank. We remained on the air with battery backups, but after an hour or so they started shutting down, one by one. Ironically the last backup to fail was the one powering our on-air console, microphone and link to the transmitter, so we were able to continue broadcasting. God was watching over us. My Operations Manager Nate Adams, along with a couple of mechanics from a car repair shop next door, were able to get the generator running… without a minute to spare!

The storms weren’t finished. Into the evening we continued to deal with multiple tornadoes. At one point there was a warned tornado headed directly for our studio building in South Huntsville. As our meteorologist Jennifer Narramore reported live on the air, we realized the storm was close. Our afternoon host, Allen Moore – himself a TV meteorologist – and I decided it was time to evacuate the studio and head downstairs to our vault. Yes, a vault. WRSA is located in a former bank building! Meanwhile Jennifer reported solo for about 10 minutes until we were certain the storm had passed. Fortunately our building was not damaged.

Sadly, many homes and businesses were damaged or destroyed. People were hurt. Lives were lost. To add to the struggle, the power was out for days in Huntsville and surrounding communities. What did this mean? Stores could not open until they were able to bring in generators. Gasoline could not be pumped. There was very little power backup for cell towers. Cable TV was down, so it was impossible to watch TV without an antenna and generator power. The only way to receive information was through the radio. Very quickly we became one of the few information sources for the area, relaying information that ranged from EMA press conferences… where to buy ice… to even broadcasting the 10:00 news from WAAY-TV. We worked in partnership with WAAY, local authorities and another radio broadcaster whose station had no generator and was off the air. To say the least, radio was a lifeline. A time I will never forget.