Corrected Coordinates based on the NWS summary showing one tornado:

Per the Tornado Project, Hurricane Ivan produced a total of 120 tornadoes in three days. That is the largest outbreak on record associated with a tropical system. Almost half of those tornadoes occurred on September 17, 2004.  Per the NWS Blacksburg, “In the Commonwealth of Virginia the outbreak of tornadoes added up to 38, which is by far the largest ever one-day total not only for Virginia, but for any state east of the Appalachians north of South Carolina.”

In this summary, we will focus in on the strongest tornado reported in the entire outbreak. It occurred in Fauquier County, VA near the town of Remington. The SPC database lists three separate tornadoes. However, in the summary provided by the NWS Baltimore/Washington, these three tornadoes were actually one long-tracked tornado.

The tornado developed just to the southeast of Remington. A pickup truck on Summerduck Road was lifted and carried through the air greater than 75 yards over trees and powerlines. It smashed down in a field. The NWS based the F3 rating on the damage to the truck. Structural damage in this area was minimal.

As the twister traveled north, it moved into the Meadows Subdivision. Several homes had their roofs removed.  One home slid off its foundation and numerous garages and outbuildings were destroyed.  The track continued to the north producing intermittent tree and powerline damage. Per the NWS, in an area near Broad Run, “large stands of very old mature, healthy trees were snapped off and small missiles were impaled into the buildings.” The tornado lifted north of Interstate 66.

Photos of the Tornado 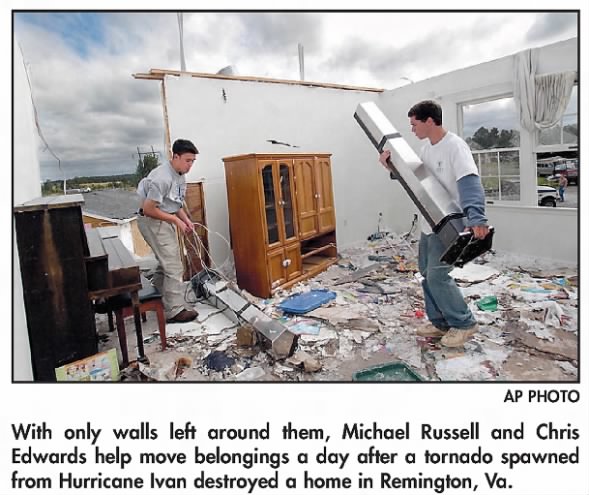 We gathered information for this event from the SPC & NCDC Databases, the September 2004 Storm Data Publication (SDP), and old NWS Baltimore/Washington even summary page and found the following differences: