Hurricane Andrew hit South Florida during the early morning of August 24, 1992.  There were no tornadoes reported in Florida.  Ted Fujita surveyed the damage.  “Three scales of wind systems were isolated and studied in detail. They are (1)  Overall hurricane, (2)  Swath of high wind and (3)  Mini-swirl and microburst.”  He determined “the damage-causing peak winds of (2) and (3) were far stronger than ordinate peak gusts experiences along the path of Andrew.” (Storm Data)

Andrew pushed across the Florida peninsula and made a secondary landfall on August 26, 1992 WSW of Morgan City, LA.  Ahead of this landfall, on the 25th, tornadoes were spawned across parts of Louisiana and Mississippi. The first tornado was also the only killer tornado produced by Andrew and that is the topic of this summary.

This F3 tornado moved in a westerly direction from 2 mile East of LaPlace to 4 miles NW of Reserve.  There were two fatalities:  a 63-year-old man and a 2-year-old girl.  She died a few days later of head injuries.  Both lived in the community of Reserve.   A total of 66 homes and 33 mobile homes were destroyed.  180+ more had minor to moderate damage.  The River Parishes hospital had roof damage and had to be evacuated.

A strong tornado moving rapidly west on an intermittent 9-mile path through Laplace and Reserve between 2010 CST and 2020 CST, killed two people and injured 32.  Both fatalities, a 2-year-old girl and a 63-year-old man, occurred in their Belle Pointe subdivision homes in Reserve.  A joint damage survey conducted by the St. John the Baptist Office of Emergency Preparedness and National Weather Service indicated that 66 homes and 33 mobile homes destroyed; 56 homes or mobile homes sustained moderate damage; and 130 homes or mobile homes had some minor damage.  Twenty-five businesses were either destroyed or sustained moderate damage.  This includes the River Parishes Hospital which had its roof damaged by the tornado and had to be evacuated.  Seven public buildings including two schools were damaged.  Estimated damages to homes and mobile homes were $6,726,250; businesses, $3,428,500; public buildings, $1,957,500.  Agricultural losses to the sugar crop were $1 million and $100,000 to the soybean crop. 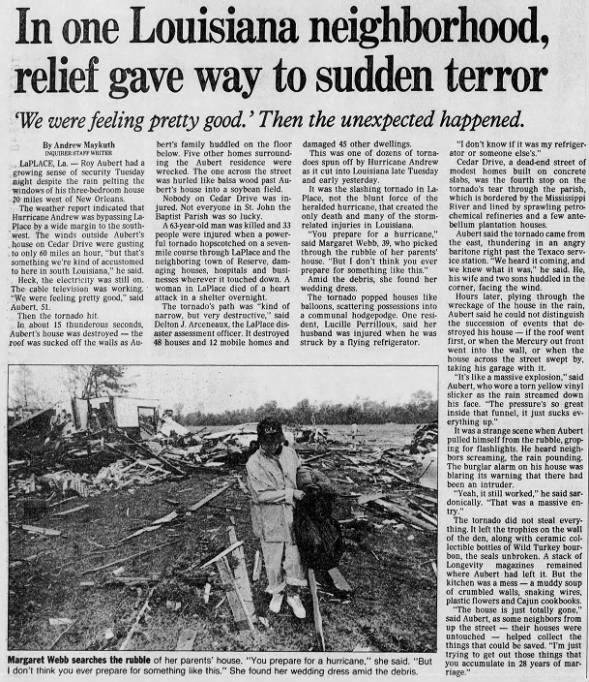 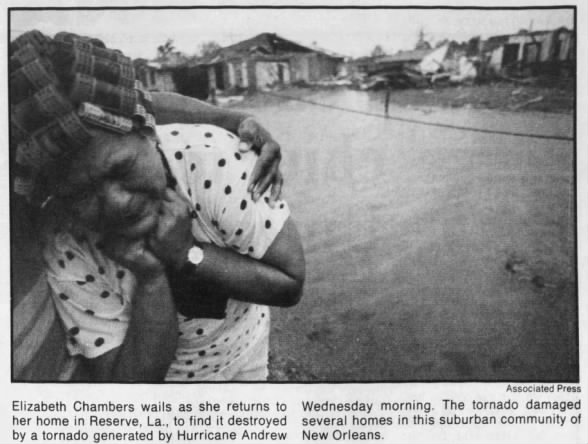 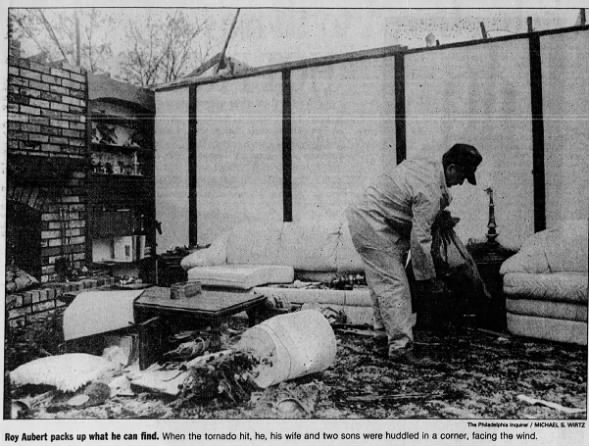 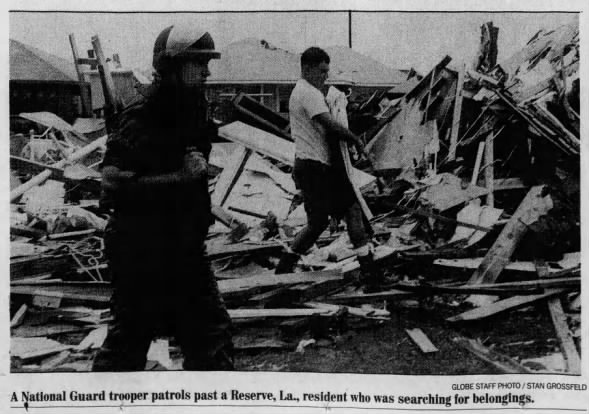 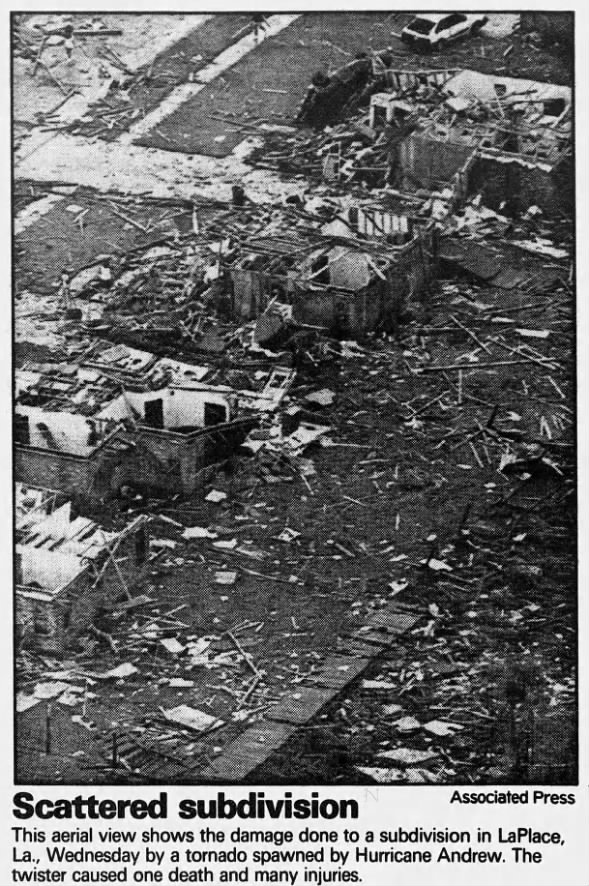 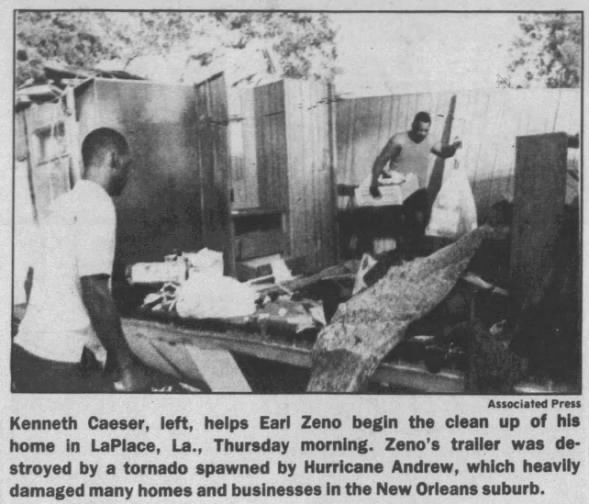 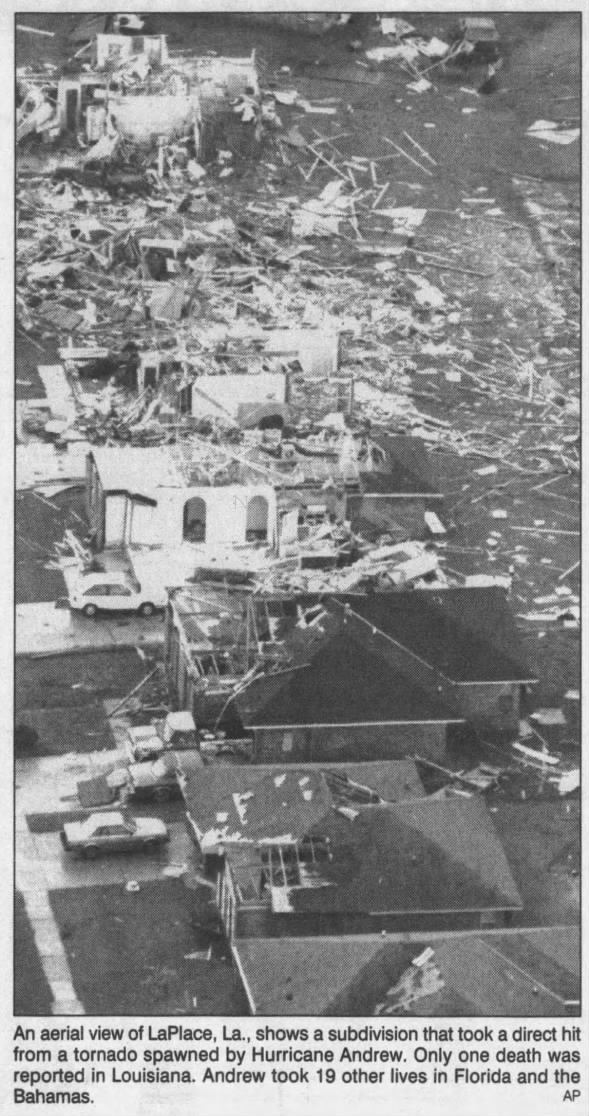