On September 24, 2001, one of the most significant tornadoes to ever hit the Baltimore-Washington metropolitan area occurred. Of the nine tornadoes that day, six were in the NWS Baltimore/Washington County Warning Area (CWA). That included an F1 that brushed by the parking lot of the Pentagon, only 13 days after a group of terrorists had flown a commercial flight into that same building and killed 184 people. The deadliest of the outbreak was an F3 that struck the DC suburb of College Park in Maryland, killing two. However, the focus of this summary is on the strongest tornado of the outbreak, and one that has remained obscure for decades. Per the Storm Prediction Center (SPC), this F4 is one of only two in records going back to 1950 within the state of Virginia. The other one occurred on August 4, 1993, in Petersburg.

This tornado began 1.4 miles to the southeast of Rixeyville in Culpeper County and moved towards the north-northwest. The track started in a forested area with sporadic uprooting of trees in a weakly circular pattern. It crossed Ryland Chapel Road and the width very briefly expanded to near 250 yards, with more uniform if still sporadically uprooted trees. This lasted only for a moment. A tree was blown onto a home in this area. This first tornadic swath appears to have ended with a mere length of 0.9 miles. The next sign of any tornadic damage is 1.3 miles northeast of the end of the first swath, and this time in a north-northeastward direction out of a forested area. It is not entirely uncommon for weak tornadoes to have “skipping” paths of this distance between damage, though these two paths track in somewhat differing directions. The NWS Baltimore/Washington was unable to access the area between the two tornadic swaths to confirm a continuous path. It is possible there were two separate tornadoes. It is more likely that the tornado may have been too weak to produce tree damage visible several years later in aerial imagery. The differing trajectories could possibly be explained by the fact that this tornado exhibited an erratic zig-zagging path.

The tornado exited the forested areas into largely open grassland, where damage had largely been limited to a couple of uprooted trees and snapped branches. A quarter-mile later another grove of trees was brushed through, where tree uprooting appeared notably more populated but not intense.

On the other side of a grassy field from the grove of trees was a large, “well constructed,” and “brick wall exterior” house along Indian Fork Road. The $500,000 summer home, owned by Dr. John Vas, was vacant at the time. This structure had a steel frame, with two stories above ground and an additional walkout basement level. An eyewitness described that the tornado “dropped onto” the home. The entire top floor was swept cleanly away, and only a couple of the interior kitchen walls were left on the first floor. One of the steel I-beams originally holding up the first floor was found to be badly twisted. Some of the walkout-basement walls were also leveled. Wood and even bricks were “impaled into the ground.” Roof trusses and a section of a deck were hurled as far as a half-mile downwind. Insulation was found six miles away as well, and The Free Lance Star described “the half-mile debris trail, evident in the days after the impressive two-story structure exploded….” It must be noted that this is exceptionally intense damage, perhaps some of the most impressive tornado damage ever recorded in the larger region. No trees were encountered by the tornado within a 300-yard radius of the house. Nevertheless, both before and after hitting the home I could not find any contextual tree damage typically associated with F4, F3, or F2 winds. Such rapid fluctuations in intensity could be found along other portions of the path as well.

After it crossed Indian Fork Road and continued through grassy open areas for a mile, the tornado entered another area of forest. The severity of the tree damage was unimpressive and varied wildly, but still more defined than in previous points along the track. 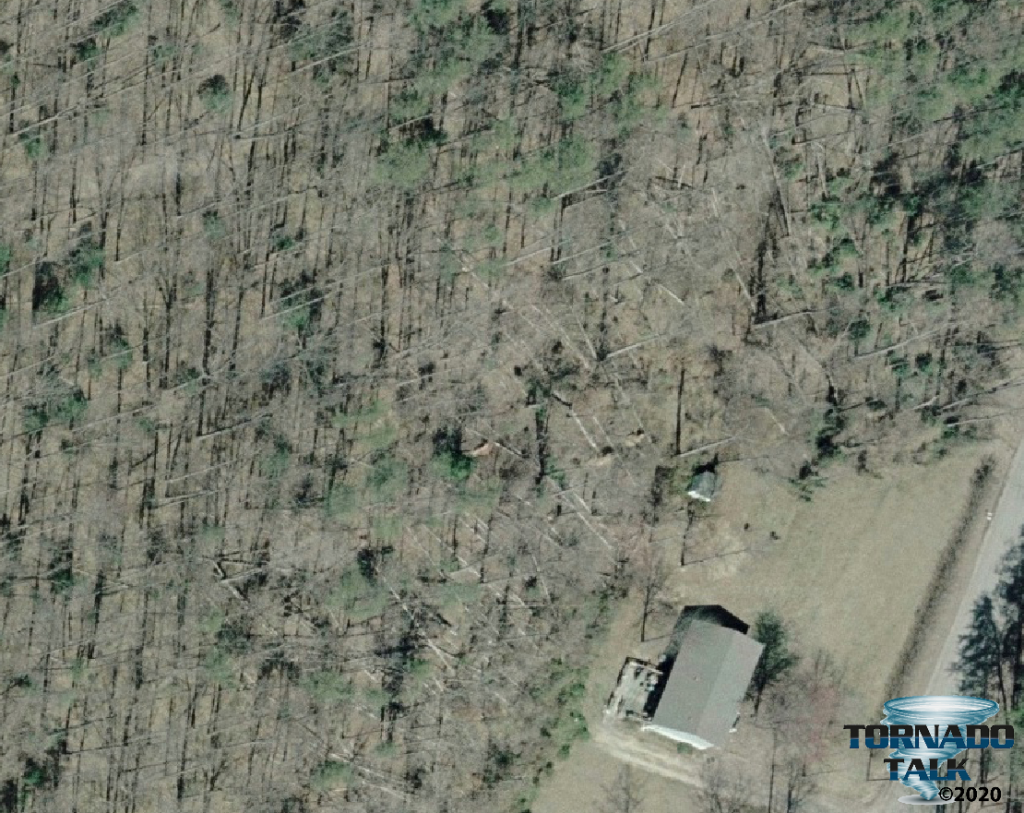 The tornado continued for another mile and crossed Scottsville Road. Soon after it moved through the Ponderosa Trailer Park, destroying three trailers and damaging four more. One of the destroyed trailers was found in pieces 300 yards from where it was originally located. Two people were injured in the mobile home park, one of whom had been struck in the back by flying debris while clinging to a pole.

The tornado made a sharp turn to the north-northwest, causing two churches to be damaged. The Rising Zion church sustained only superficial damage. 60 yards to the north-northeast of the church, a small cluster of softwood trees was completely flattened with some minor debarking visible in a photograph. This swath of extreme winds only measured 10-20 yards wide and narrowly missed the Upper Zion Church. The only damage to the church was when the roof was torn off of the social hall.

The corridor of intense tree damage continued for a short distance into a large grove of trees before disappearing. The tornado followed a zig-zagging north-northeastward track along Springs Road, moving through the heart of sparsely populated Jeffersonton but only impacting two other churches and several more houses. The hardest hit was a two-story home that lost a portion of its roof, a large garage, and the rear porch. One of the churches sustained extensive roofing damage. Large pieces of the roof were deposited in a resident’s front yard a quarter-mile away.

Quickly after leaving Jeffersonton, the tornado weakened. Tree damage became barely noticeable in forested areas over the next half mile before it crossed the Rappahannock River into Fauquier County. Damage in that county was sporadic and weak. According to the NWS survey, it was limited to some F0 tree damage and F1 damage to an unroofed barn. After four miles in Fauquier County, the tornado dissipated near Route 211 at 3:25 pm EDT.

The tornado lasted for 22 minutes and injured two people in Jeffersonton. Assuming the path was still continuous between the two mapped swaths of damage, this event had a path length of 12.4 miles and a technical maximum width of 260 yards. However, the width for nearly the entire track was far smaller in the 50-150 yard range. Per the SPC there was $2.02 million in damage. Jeffersonton recovered quickly and was unfazed by the event. The large home destroyed was never rebuilt; to this very day, the concrete foundation remains a scab on the landscape of a grassy field.

A special thank you to the Science and Operations Officer at the NWS Baltimore/Washington Steven Zubrick for his invaluable help.

We gathered information for this event from the SPC & NCDC Databases, the September 2001 Storm Data Publication (SDP), a no longer publicly accessible NWS Baltimore/Washington event page, and Nelson Tucker’s analysis and found the following differences: