An F4 tornado developed rapidly in a highly unstable atmosphere and devastated everything along its 9.6 mile path through Woodford County, IL on July 13, 2004.  It began 1.75 miles NNE of Metamora and traveled generally in a southeasterly direction.  The tornado reached F4 intensity as it crossed Route 117 and demolished the Parsons Manufacturing Plant. There were 140 people in the plant at the time and all made it to storm shelters in time.  Per the NWS Summary, they arrived 3-5 minutes before the tornado arrived.  “Steel beams and metal siding from the plant were found approximately 3/4 mile east in a farm field.”

A paper found in the Natural Hazards Center Library discusses the proactive safety plan that was in place at the Parsons Plant and how the implementation of that plan saved lives.  There were no fatalities with this event and only 3 injuries reported.  Here are a few highlights in regards to the severe weather safety plan at Parsons:

Here is the full paper on their plan.  All companies could learn a great deal from the Parsons Plant Warning Process.

After hitting the Parsons Plant, the tornado continued its trek devastating farmsteads.  2 farmsteads near the plant had the 2-story homes leveled with only debris remaining in the basements.  The tornado approached Roanoke from the SW.  It tracked south of town causing significant damage to a barn and another farmstead.

I found a very detailed paper written by members of the NWS Central IL about this event.  It is entitled, “The July 13, 2004 Tornado event:  Analysis of Tornadogenesis in a Highly Unstable Environment.” Read the full paper here.

Their analysis showed a unique weather set-up for this event.  A small shower developed into a supercell with an F4 tornado in less than 30 minutes.  “Intersecting boundaries, the high levels of instability, and the environmental and storm-scale storm relative helicity were critical players in producing the resultant tornado.”

The tornado touched down around 234 pm CDT approximately 1.75 miles north-northeast of Metamora in western Woodford County. The tornado traveled southeast for about 2.5 miles, before beginning a temporary eastward jog between county roads 1300E and 1400E. The tornado curved southeast again, striking the Parsons Company, Inc.’s manufacturing plant around 241 pm CDT. The plant was severely damaged by the tornado. Approximately 140 people were in the plant at the time, but all personnel made it to storm shelters in time (approximately 3 to 5 minutes before the tornado arrived). Steel beams and metal siding from the plant were found approximately three quarters of a mile east in a farm field.

From the plant, the tornado continued east, just south of Illinois Route 116/117, affecting 4 farmsteads approximately 1/2 to 1 mile east of the plant. Two of the farmsteads closest to the plant (about 1/2 to 3/4 mile east) had the 2-story houses completely blown away, with only debris remaining in the basements and nearby property. The other two farmsteads had significant damage to the 2-story houses with outbuildings demolished. The center of the tornado tracked about 100 yards south of the houses located on the south side of the road.

From the plant to the farmsteads, the average width of the tornado was 400 yards and was close to 1/4 mile wide at times. The greatest tornado intensity was during this approximately 1 mile stretch and has been rated F4 by the National Weather Service. 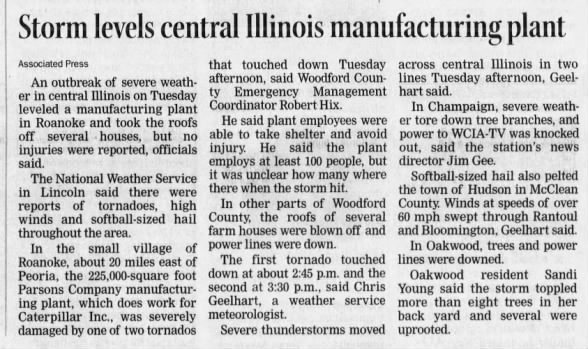 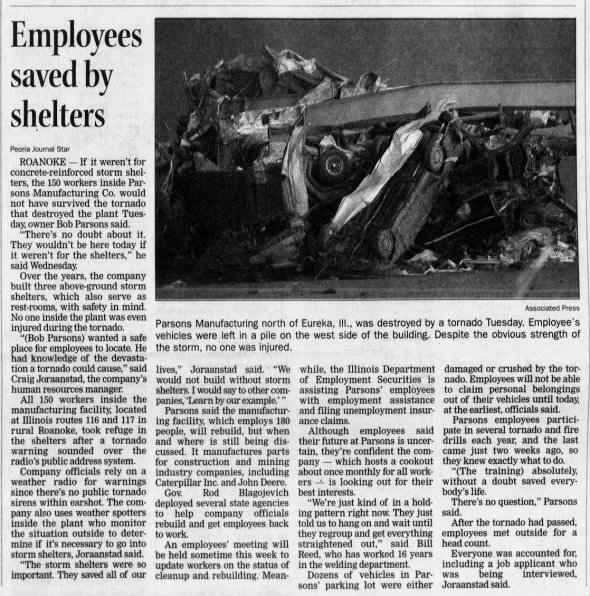 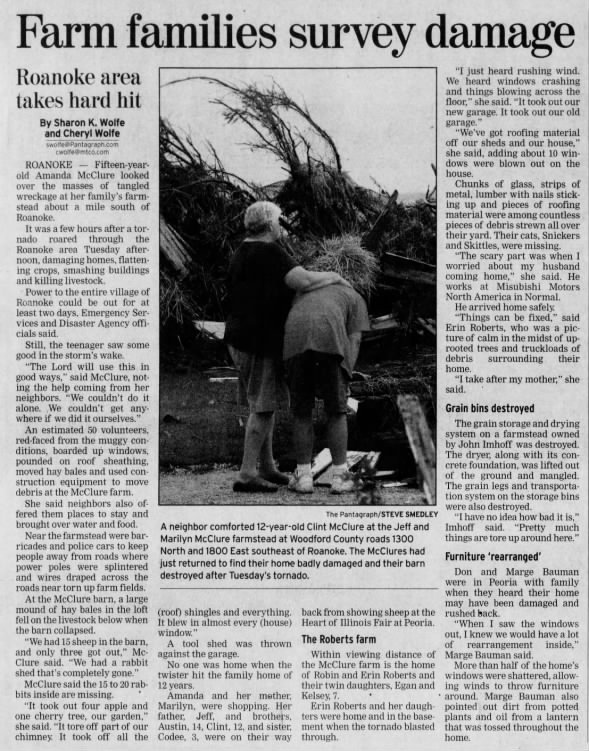 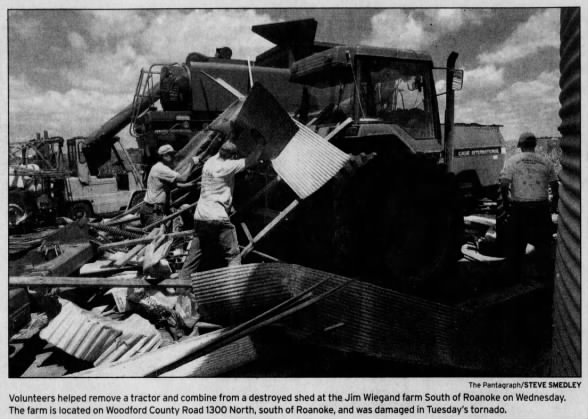 The July 13, 2004 Tornado Event: Analysis of Tornadogenesis in a Highly Unstable Environment.