This F5 is commonly known as the “Ruskin Heights Tornado” because of the tremendous damage inflicted there.  It has also been called “The Kansas-Missouri Tornado” and “The Ottawa-Kansas City Tornado”.   It developed southwest of Williamsburg, KS, traveled close to 70 miles and ended near Knobtown, MO.  This tornado was the strongest of 35 that occurred on May 20, 1957.

Per the Climatological Data National Summary (CDNS), a supercell formed south of Emporia and moved NE toward the southern parts of Kansas City.  A number of tornadoes and funnel clouds were produced.  One caused damaged near Hartford, KS.  Another hit near the Verdigris River.  This Ruskin Heights Tornado was the main one of the family traveling through Franklin, Miami, and Johnson Counties in KS and ending in Jackson County, MO.

A total of 44 fatalities were reported.  The SPC only lists 207 injuries. Thomas Grazulis in Significant Tornadoes states the injury count at 531.

Severe thunderstorm developed south of Emporia and moved northeastward to southern Kansas City, MO from about 5:30 to 8pm.  A number of funnel clouds and tornadoes were spawned by this thunderstorm cell.  At Hartford, 14 miles southeast of Emporia, tornado at 5:45pm followed short, east-southeastward path through town, damaging trees, roofs and windows with damage of $300.

Main tornado of this storm struck ground about 2 miles southwest of Williamsburg, Franklin County, about 6:15pm and followed northeastern course of 71 miles to about 2 miles northeast of Knobtown, MO.  Kansas part of path approximately 57 miles.  Tornado passed out of Kansas 1 mile southwest of Martin City, MO at 7:37pm.

Another tornado left damage path of about 7 miles adjacent to and paralleled with main path from 1 mile northeast of Williamsburg to about 3 miles northeast of Homewood.

3 funnels observed east of Ottawa in addition to main tornado.  1 funnel sighted aloft and heard as it passed northeastward over Overland Park and Fairway.

Main tornado on ground virtually all the length of path.  Noise of tornado terrific and could be heard at least 5 minutes in advance.  Debris carried to height of 30,000 feet and to many miles from damage path.  Cloud was well-defined funnel variously described from light to dark, and which because larger and narrower near its termination.  Destruction indicated great intensity of storms.   Damage to property estimated at $1,000,000; to crops $10,000.

Tornado first spotted at 6:15pm near Williamsburg, KS.  It was tracked by radar and reported by persons observing storms along its entire track.  Crossed Kansas-Missouri border just north of southwestern corner of Jackson County at 7:37pm.  From there it hit Martin City, Ruskin Heights and near Knobtown.  Speed of motion calculated at from 31.4 to as much as 46.9 mph at various times along its path.

Some indications tornado lifted near Knobtown, then either came back down, or another funnel formed near Sibley then moved into Ray County across river.  Witnesses at Hardin and Richmond told of seeing tornado and considerable damage to property done at Richmond about 8:30pm.  Debris from Hickman Mills found later at Ottawa, IA and at many points in north-central Missouri.

I have included a path map below from the Weather Bureau

Images via the NWS Kansas City Summary of the Event 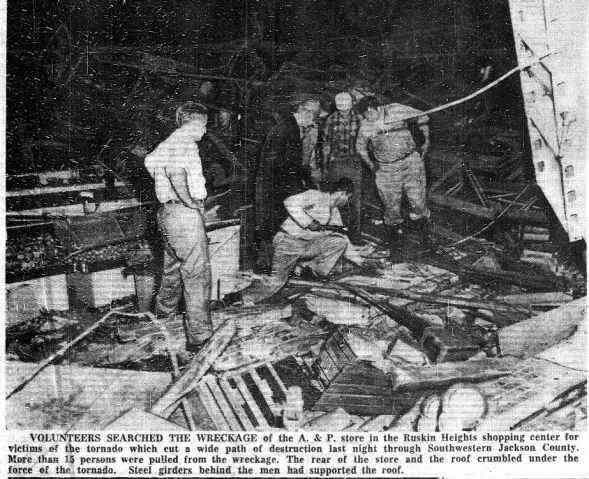 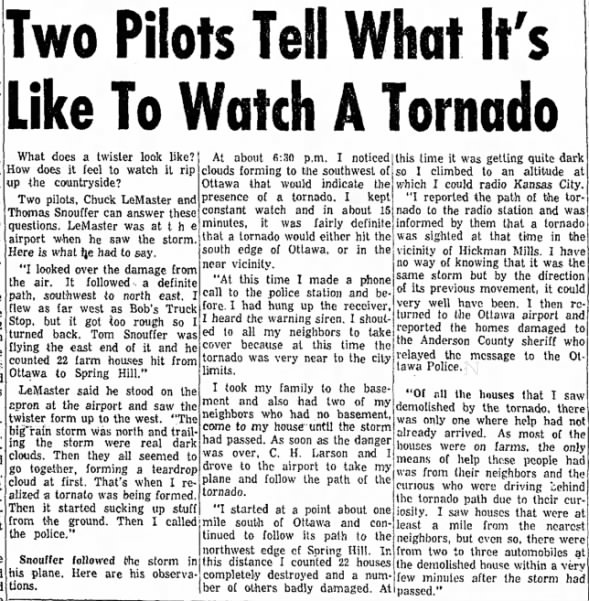 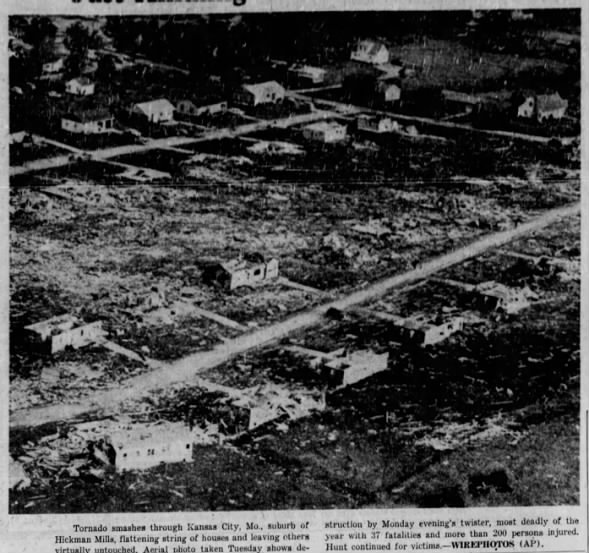 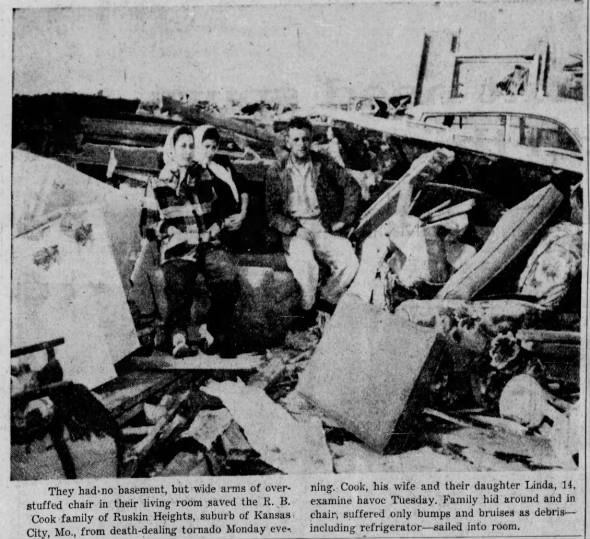 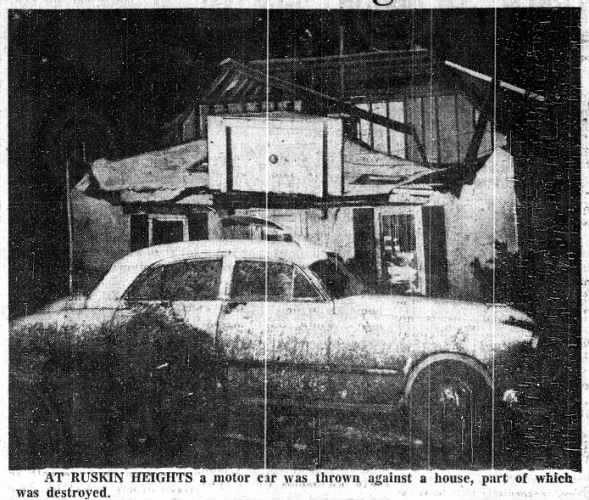 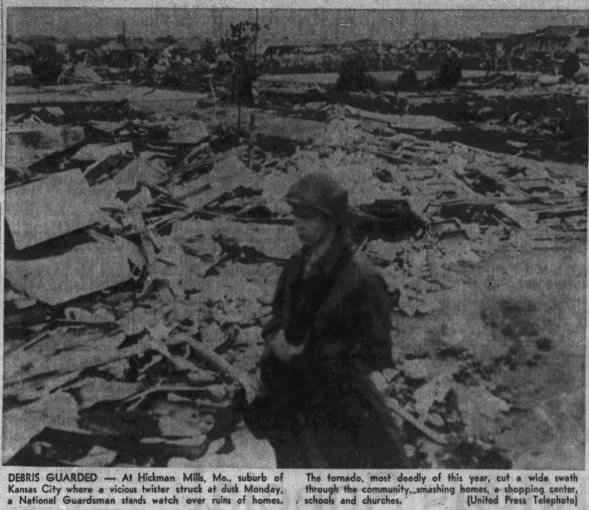 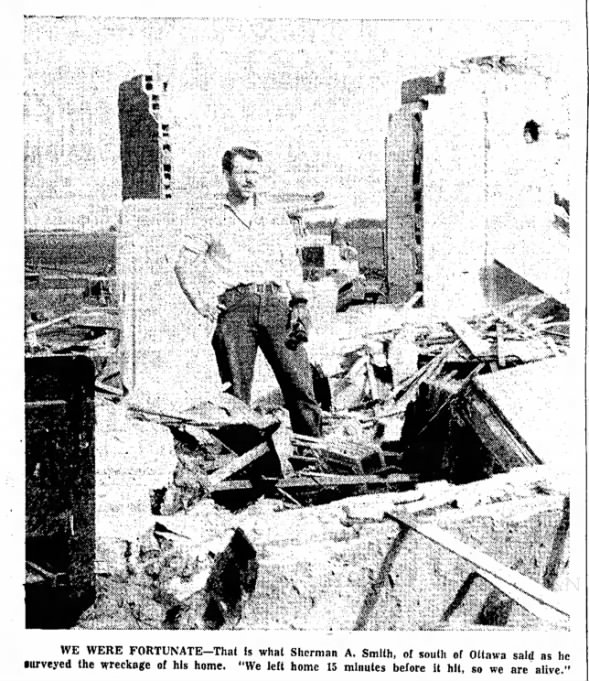 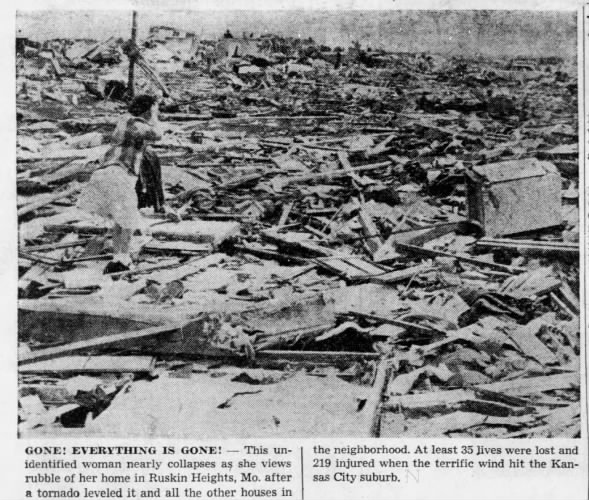 We gathered information for this event from the SPC & NCDC Databases, the May 1957 Climatological Data National Summary (CDNS) and Thomas Grazulis in Significant Tornadoes and found the following differences: