August 11th, 1999 is a day that many Utahns will never forget. One of the most damaging tornadoes in Utah state history descended upon downtown Salt Lake City, tragically killing 1 person and injuring 80 others. The tornado carved a path of destruction 4.3 miles long through the heart of Salt Lake City, causing over $150 Million in damages to the state capital and surrounding neighborhoods. This widely visible tornado was rated F2 and became a stark reminder of the unique meteorological setups that can occur along the Wasatch Front.

The tornado formed at 12:41 pm MDT in the Poplar Grove neighborhood, just over two miles west-southwest of Downtown Salt Lake City. The damage was initially in the F0 to F1 range but the tornado intensified to an F2 as it moved northeast, crossing the interchange of Interstate 80 and Interstate 15 into the northern part of Downtown Salt Lake City. Customers and employees hid in the walk-in cooler at Club Axis, as the building collapsed around them. They were uninjured. It caused “widespread” roof and window damage at the Delta Center (now called Vivent Smart Home Arena). Sections of the roof were peeled back and removed. The then- Wyndham Hotel (now owned by Raddisson), located across the street from the Delta Center was heavily damaged. Several of its windows were sucked out. A parking sign from the Delta Center was found 2 miles away in the front yard of a home in The Avenues Neighborhood. Diagonally across the street from the arena, the Outdoor Retailers Convention was being set up and had erected massive steel-framed canvas tents in a parking lot just north of the Wyndham hotel. The tornado leveled one of the tents there. Sadly a man from Las Vegas, 38-year-old Allen Crandy, was killed when the tent was destroyed. This was also where many of the injuries occurred. Pieces of the canopy and metal beams from the tent were “scattered for blocks.”

From here, the tornado moved northwest into Temple Square, Headquarters for the Church of Jesus Christ of Latter-Day Saints (LDS). Viral video taken by wedding photographers on the western steps of the Salt Lake City Temple showed debris from the Outdoor Retailers Convention lofted over the Tabernacle building and into Temple Square. The west-facing doors of the tabernacle building were removed, and glass from the windows at the North Temple Square visitors center was found embedded 12 inches into soil elsewhere in the church complex. Across the street from the visitors’ center, the new assembly hall and conference center that was under construction at the time received a direct hit. Here, the tornado ripped down scaffolding and caused a 200-foot crane to buckle and collapse. The tornado scattered building materials from the construction site over a mile further down the path. In northwest Temple Square, the tornado blew out some north-facing windows of the 28-story LDS Church Office Building and uprooted numerous trees on the grounds of Temple Square. Included in this was “The Sweetheart Tree”, said to have been grown from the seeds transported by Mormon pioneers in the 1800s, and frequently used as a backdrop for temple wedding festivities.

Continuing northeast, the tornado moved across the southeastern part of the Utah State Capitol Complex. It skirted past the capitol building but caused severe tree damage. Over 100 trees were downed on the Capitol grounds. Minor damage was also reported to a few of the historic buildings in the vicinity of Capitol Hill. Memory Grove Park, originally planted by mothers mourning the loss of their sons during World War I, was extensively damaged. Every tree was snapped or uprooted here. The tornado then continued through a residential area known as The Avenues, where it damaged at least 121 homes. F2 damage occurred here, as 34 homes were unroofed or torn apart. The tornado then lifted as it exited The Avenues, near the base of Black Mountain.

The August 11, 1999 tornado rocked the Salt Lake Valley to its core, damaging or destroying over 300 buildings along its 4.3-mile track. As of the time of writing this summary, it holds the record as the most damaging tornado in Utah history, though not the strongest. It is only the second known tornado to have caused a death in the Beehive State, the first being in 1884. But amongst the records and numbers, the tornado also served as a rallying point for the community to help those most affected by the storm. In Memory Grove, thousands worked together and raised over $1.5 million towards the replanting of trees in the memorial. Communities banded together to help remove fallen trees in The Avenues hours after the tornado passed, the calm evening air punctuated by the roars of chainsaws. While the tribulation of a damaging tornado in the Salt Lake Valley will not soon be forgotten, neither will the unity shown in its aftermath. 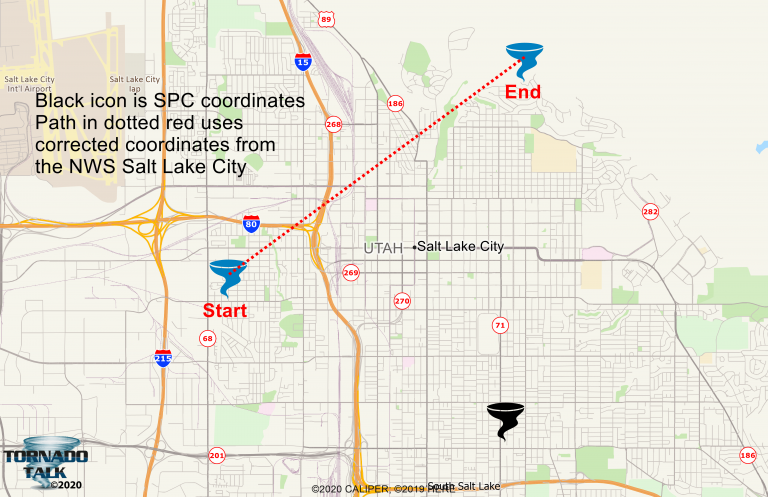 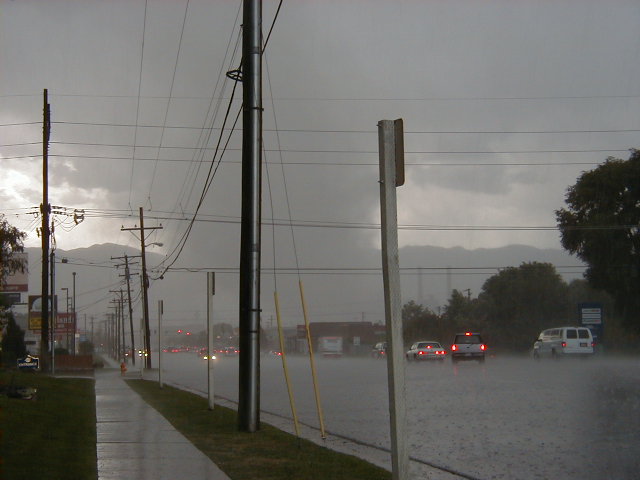 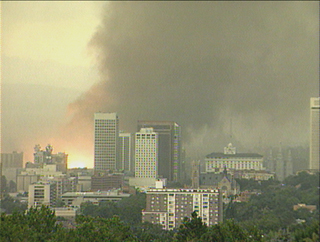 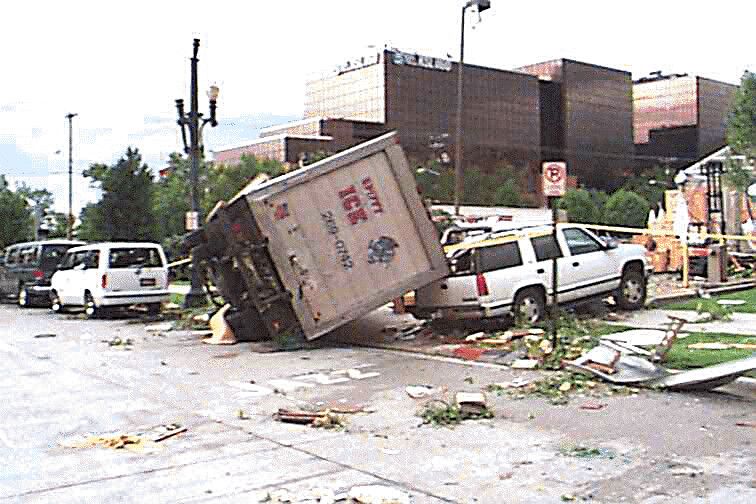 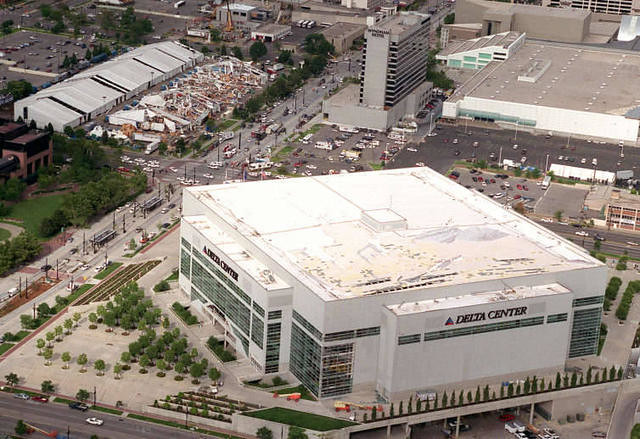 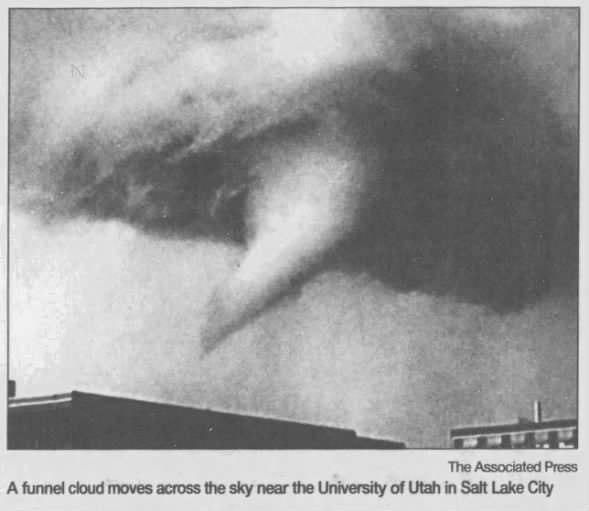 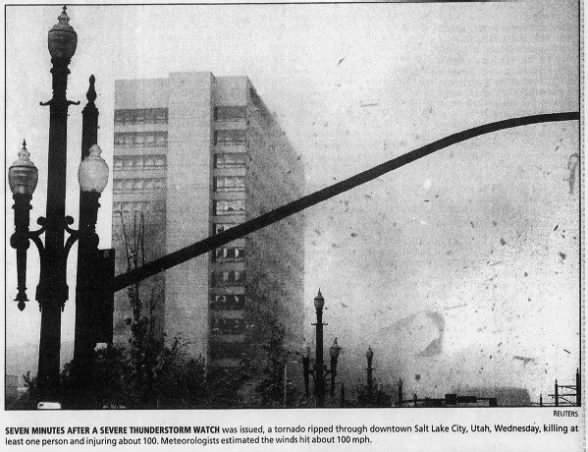 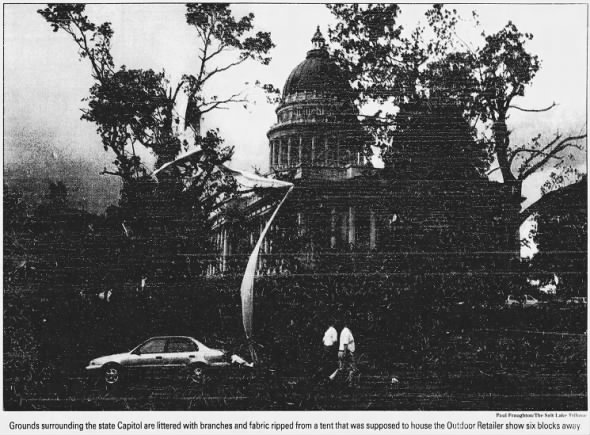 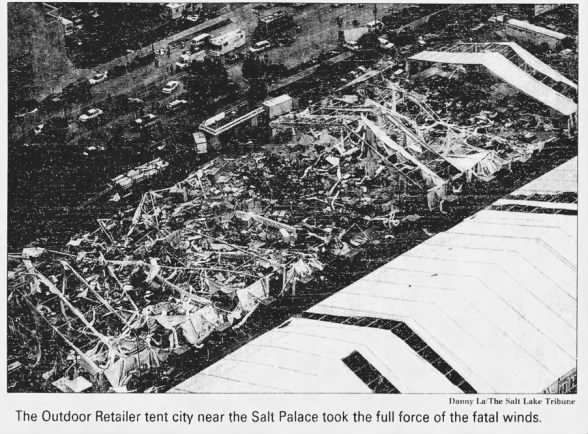 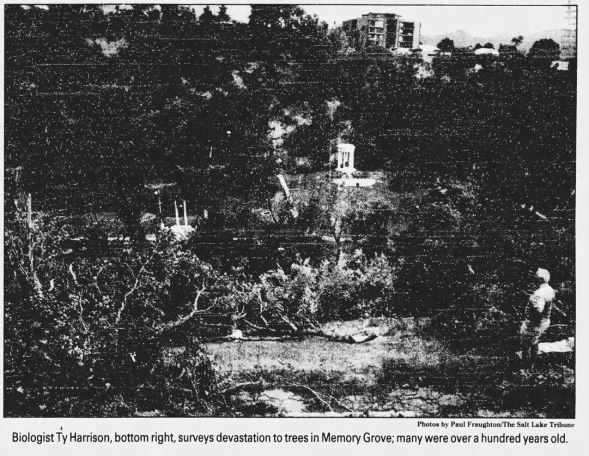 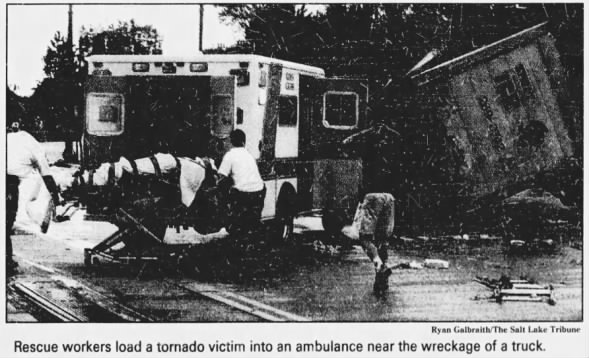 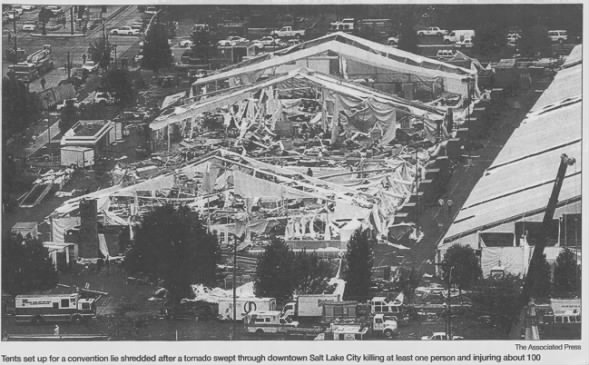 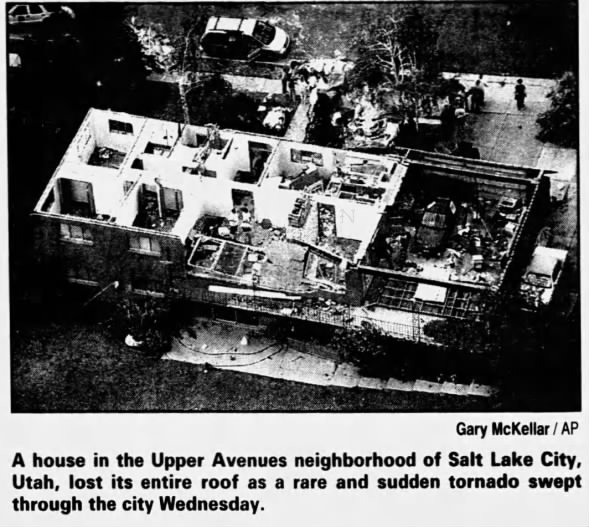 We gathered information for this event from the SPC & NCDC Databases, the NWS Salt Lake City Summary and Local newspapers/TV stations and found the following differences:

The Storm, And the Aftermath: Outdoor Retailer

Tornado Was Too Fast For Warning, Alder says Deadly Twister Suddenly “Blew up Right over Valley”