Two tornadoes occurred on this day in 1951, both were later rated F2 and both caused damage, some of it extensive in Santa Clara County, CA.  One hit in the Sunnyvale area and another in San Jose.

The knowledge of two tornadoes on this day comes from the following sources:  Thomas Grazulis in his book Significant Tornadoes (1680-1991), entries in the January 1951 Climatological Data National Summary (CDNS), through newspaper articles and other accounts.

The SPC/NCDC databases only include one tornado event on this day.  It is listed as an F2 in Santa Clara County. The path length is 5.7 miles and the max width 10 yards.  When you plot the latitude and longitude, as I have below, you can see that the path is northwest of Sunnyvale and San Jose.  We are assuming the tornado being documented in the database is the one in Sunnyvale. 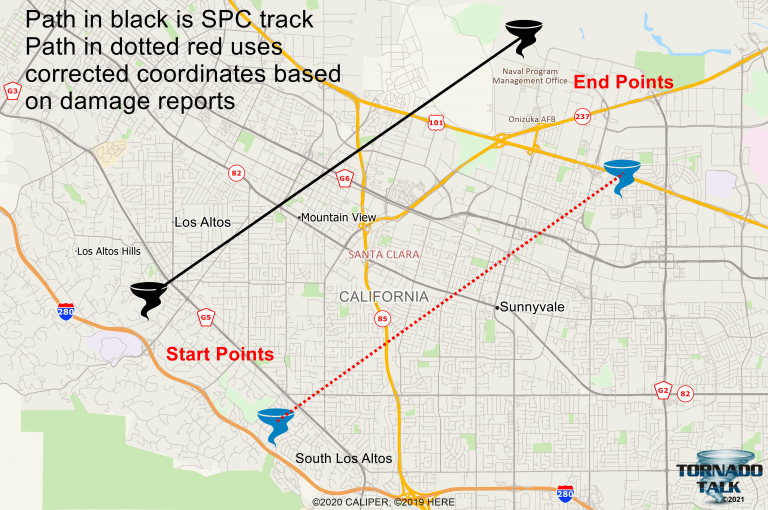 Below, we have documented to the best of my ability, details on BOTH tornadoes.  Using locations/landmarks from Significant Tornadoes, the CDNS, those found in newspaper articles, and a personal account found on the Sunnyvale Public Library Website, we have created maps for both tornadoes.  We also include track and damage details from those sources and newspaper clips of damage photos. 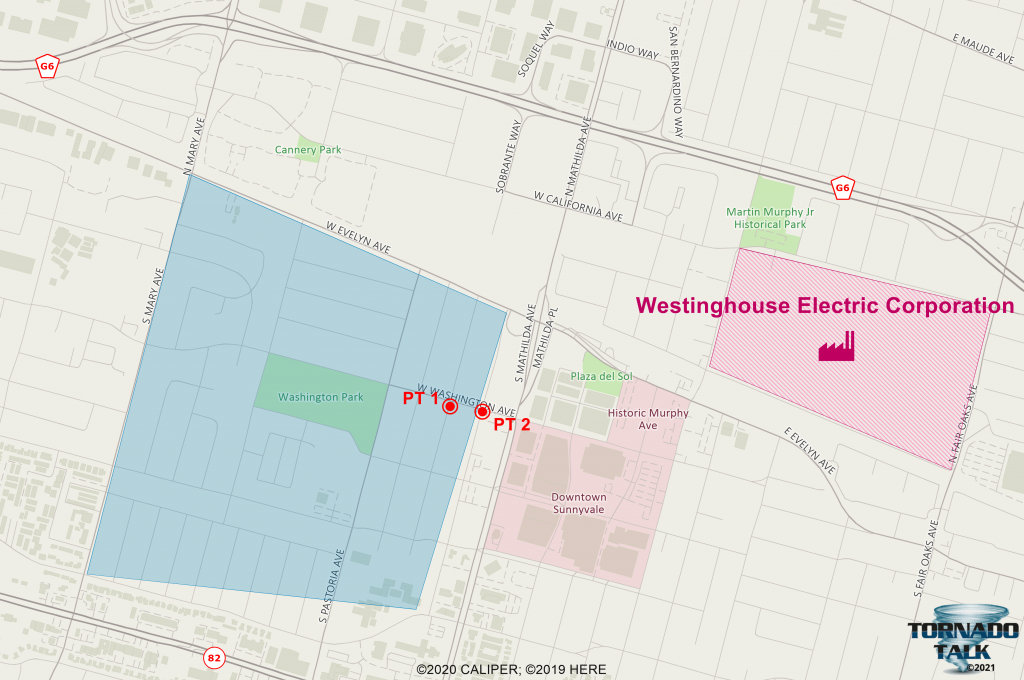 From the entry by Thomas Grazulis in Significant Tornadoes on this event: Beginning time was 0817, there were 30 injuries and no fatalities, the width was 200 yards, the path length was three miles and the rating was F2.

“Moved NE, with touchdowns in the Los Gatos residential area and Sunnyvale. Businesses and the railroad depot were destroyed on the edge of Sunnyvale, and a home was shifted.  About 150 homes were damaged in Sunnyvale, with 24 of them either unroofed or torn from their foundations.”

Per the CDNS Summary, flimsy buildings were demolished and other buildings sustained lesser damage, such as windows blown out or roofs blow off, etc.  There were numerous power lines and power poles downed.  TV antennas were snapped and there were reports of car damage.  “Some houses shifted on their foundation in a counterclockwise direction.” 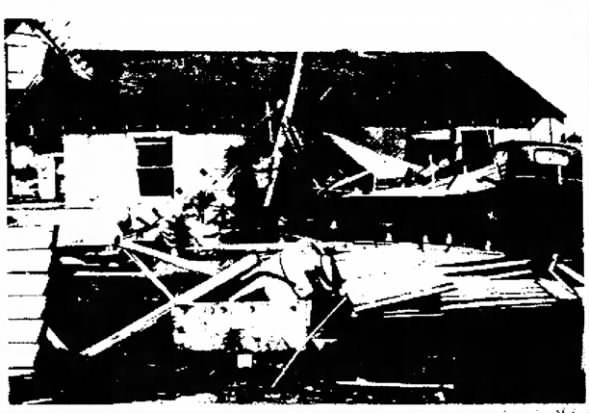 Home of John Hernandez near Charles and Washington Streets. 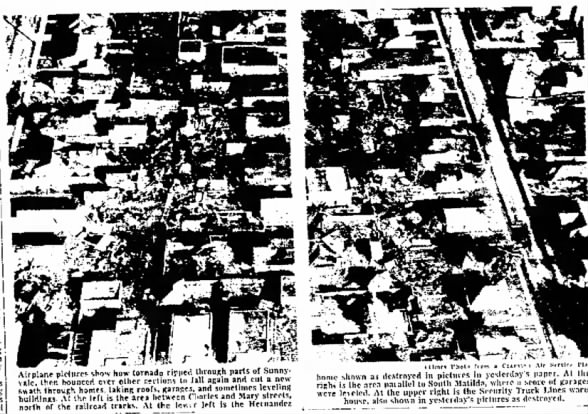 Aerial view (left side is between Charles and Mary) 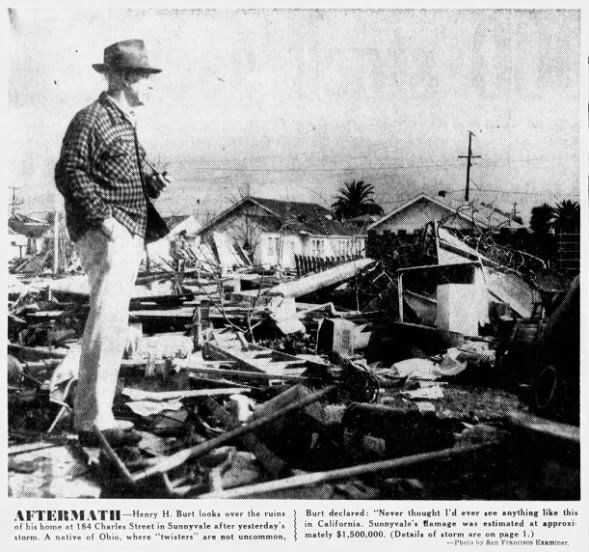 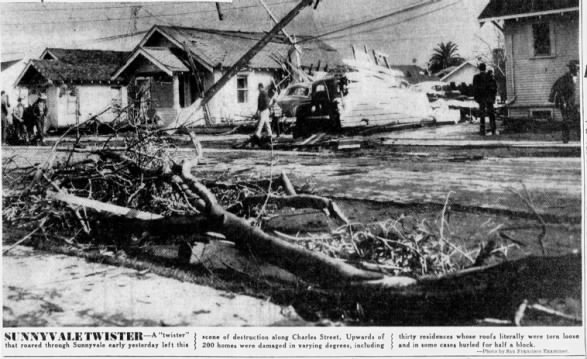 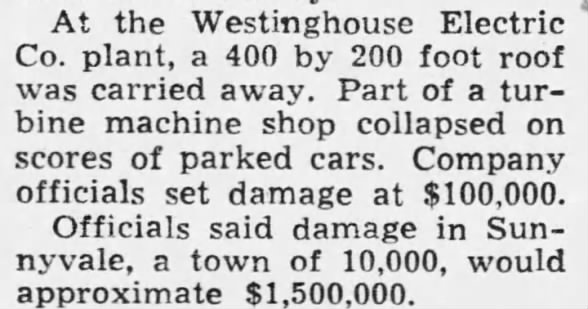 From the entry by Thomas Grazulis in Significant Tornadoes on this event: Beginning time was 0845, there were no injuries or fatalities, the width was 100 yards, the path length was 2 miles and the rating was F2.  “Hit in San Jose, passing near City Hall.  A home was unroofed, and had some walls torn off.  Hundreds of roofs and trees were damaged.”

The CDNS summary stated the tornado struck in the vicinity of Delmas Avenue and San Fernando Street and then moved toward City Hall and dissipated near the eastern foothills.  Numerous newspapers reported that the damage encompassed a 12 block area. 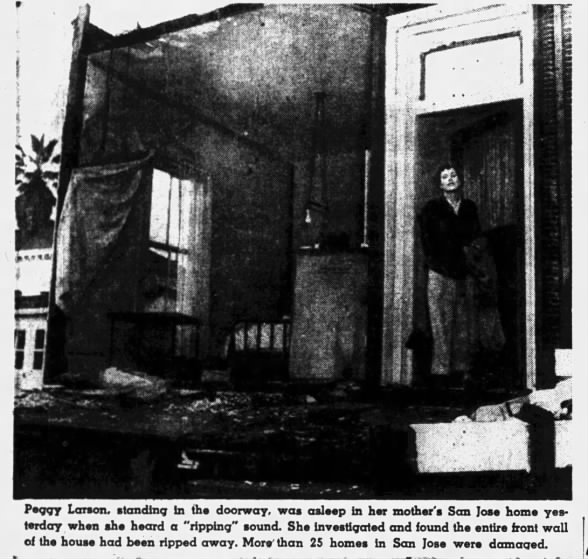